A Highway Runs Through It – the Runway that’s Walkway, Bikeway and More in Gibraltar 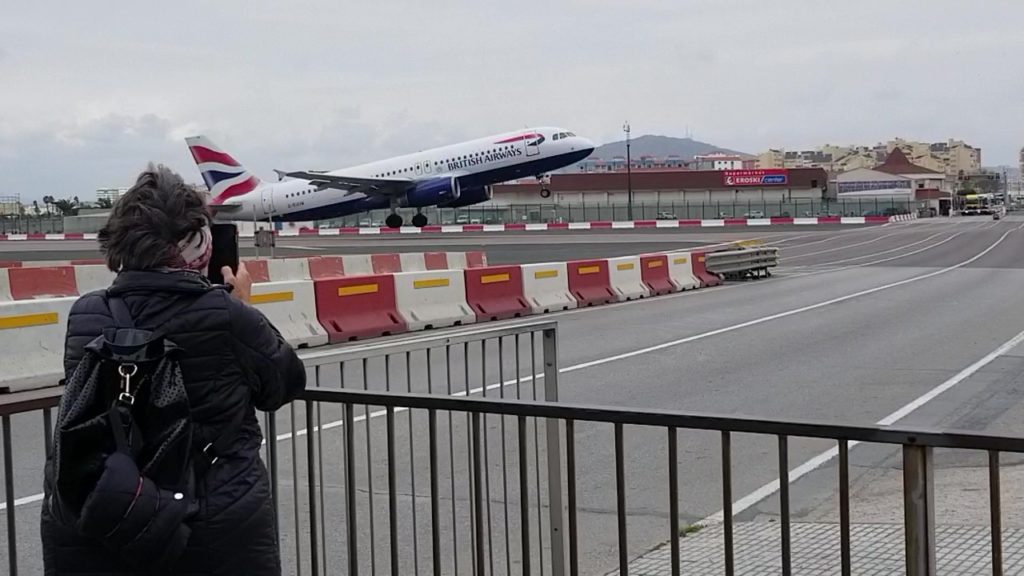 With a stiff wind blowing from the east, Ingrid Lang of Kreizlingen, Switzerland steadied herself against the gate, her cell phone tightly clasped in her hand. She and her husband had pedaled their bikes from a campsite a few miles across the Spanish border just to be at the barricade on the south side of Gibraltar International Airport in time to see British Airways flight 493 depart for London.

An aviation geek from childhood, Ingrid may have been the most enthusiastic bystander but she was far from the only one. Pedestrians, cyclists and drivers were also watching, having been brought to a temporary halt by crossing gates on both sides of Runway 09/27.

Because unlike any other commercial airport in the world, the runway at Gibraltar is bisected by a highway, a bikeway and a walkway. Also known as Winston Churchill Avenue, the road across the runway is the only land route in or out of the tiny British territory at the tip of Spain.

“The traffic on the road is closed during every takeoff and landing on the runway,” the airport explains. Uniformed police officers keep an eye on the crowds while a big yellow street sweeper does FOD patrol, looking for anything a careless commuter might have dropped along the road/runway. 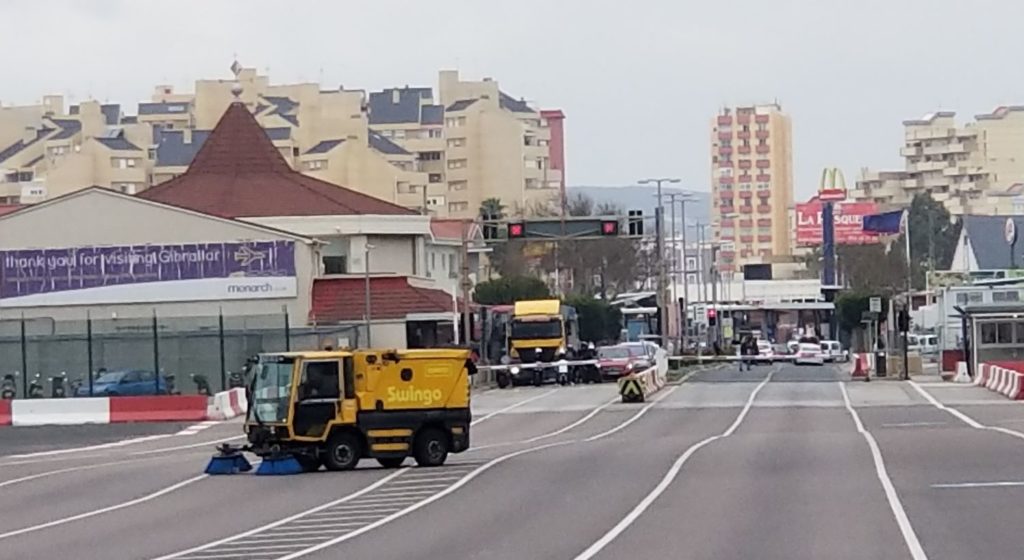 This curious setup has made Gibraltar airport one of National Geographic’s oddest airports, or as New Zealand’s website, NZStuff.com calls it, “one of the most insane” in the world. 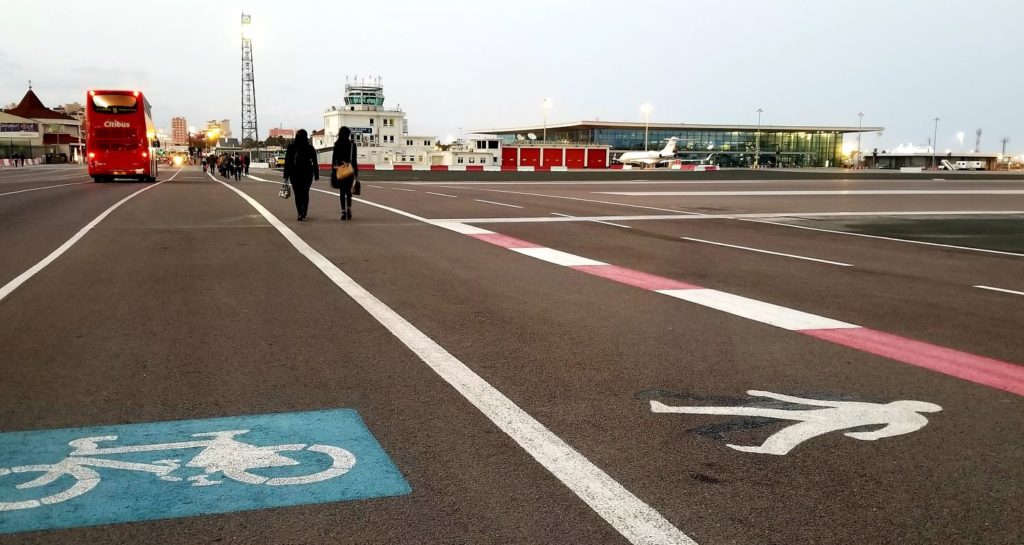 Gibraltar is odd in many ways. Since Spain ceded the strategic outpost to Britain in 1713, it has been a British territory sitting at the far end of Spain. Gibraltarians as they call themselves are a happy blend of Brit and Spanish. Now self-governed, Gibraltar complicated past includes episodes in which both Spain and Britain have played chess with the rock’s thirty-thousand residents.

From 1966 until 1985 Spain closed the land border, throwing more than ten thousand Spanish citizens who used to commute into Gibraltar for work into unemployment and separating many families. More recently it was the British who ignored the wishes of its citizens by opening negotiations for “joint sovereignty” of Gibraltar with Spain without consulting Gibraltar’s political leadership.

What might be the biggest modern challenge will come next month when Great Britain exits the European Union. It is anyone’s guess what will happen then to cross-border traffic, employment and the economy in both places. Will people still transverse the runway by the tens of thousands every day once Gibraltar is no longer part of the European Union?  Will international travel be limited to sea and air?

Undoubtedly, it will further delay construction of a tunnel beneath the runway which was planned to eliminate the curious sight of crosswalks not to mention cross walkers on the runway. 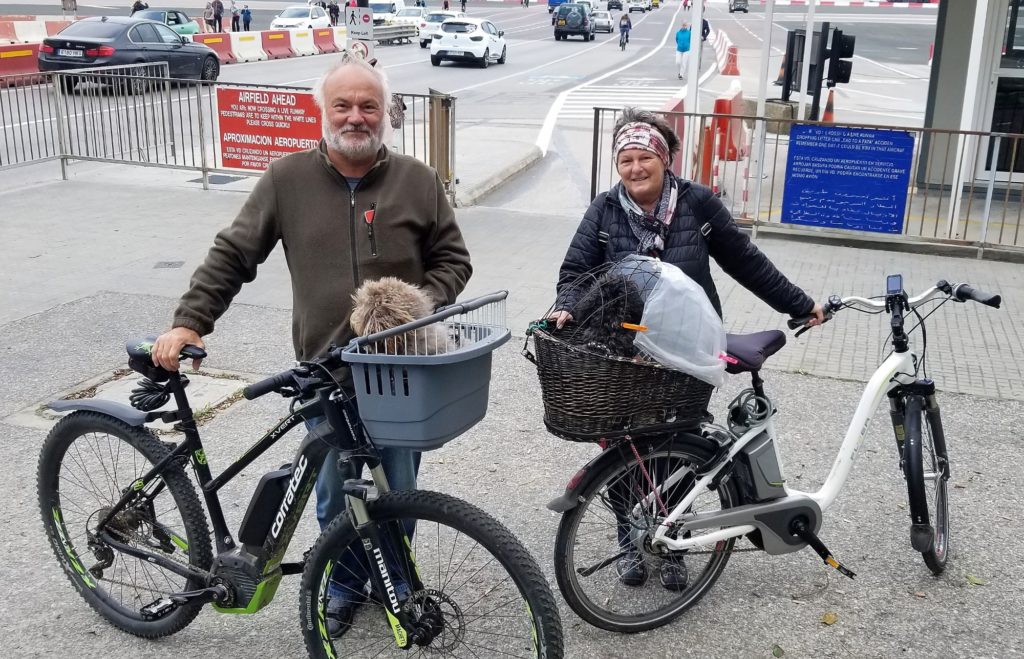 Gibraltar airport’s unusual multi-modal mix should be observed more closely. After all, if scooter-riding commuters, double-decker bus riders and even dog-toting bicyclists can integrate with airliners day in and day out why can’t their political leaders figure out a way to work together?