Airbnb For Rooms and a Whole Lot More

I can’t believe it was just one year ago that my internet-savvy daughter, Marian Schembari told me about Airbnb. I was visiting her in New Zealand headed to the United Arab Emirates  and – as is my wont – had not yet booked a hotel in Abu Dhabi.  “Why didn’t I check Airbnb?” she asked, and I had to confess, I’d never heard of it.

Simply, Airbnb is a web-based marketplace for people to rent overnight accommodations to travelers. These can be as modest as a bed in a shared room or as grand as an entire house.

In additional to these conventional places, people list houseboats, cabins,  camper vans, treehouses and windmills. Through the site people with housing are connected with people in need of it in twenty six thousand cities and 192 countries. You can read more about it here.

Since then, I’ve stayed nine times in the private homes of airbnb hosts and in fact have become an airbnb host myself. I could go on and on about why I love calling someone else’s place my home for a night or two, but let these stories of a few of my actual experiences tell the tale. 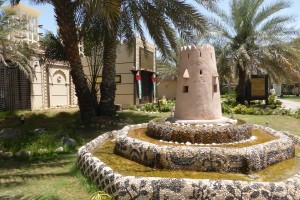 MY FIRST TIME IN ABU DHABI

Richard and Catherine are Americans living in Abu Dhabi in a palatial but homey apartment downtown. I liked them right away and was charmed by the big, comfy room and private bath that was mine for the three days I stayed with them. On my last night, Richard woke me up around 3:00 am. Catherine, who was pregnant was having some difficulty and needed to be taken to the hospital. Would I mind if they left their sleeping daughter, aged two, in my care? Mind? Why should I mind? I’m the mother of four children myself. The child was adorable and I’d had fun getting to know her the previous days. 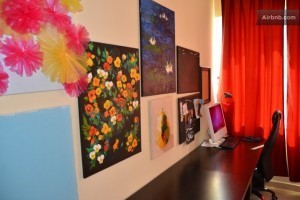 Fortunately, Catherine’s problem was not serious and she was back in the apartment before the child woke up that morning. Unfortunately for me, I never had a chance to play auntie with the toddler. What I loved was being so welcomed and trusted in the home of people who just days before had been strangers.

Richard and I had several great conversations during my time there and I wound up quoting him in a story on an entirely unrelated subject that I wrote later for The New York Times. 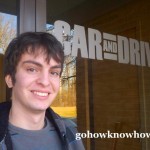 At Richard and Catherine’s house I’d been able to help out in a pinch. In Ann Arbor this February, my hostess Michelle was able to help me out. My son Sam was moving to the city for his new job at Car & Driver and before he started we’d gone shopping for some work clothes. It was Sunday and now seven pairs of pants needed to be hemmed before I left town on Monday night.

After exchanging pleasantries with Michelle, I excused myself saying I had sewing that needed to be done on deadline.  That’s when Michelle showed me to her sewing room. And this wasn’t just any sewing room. She had an expansive layout table, serious cutting shears, thread in every imaginable color, a sewing machine that hemmed and, wait for it, a serger! 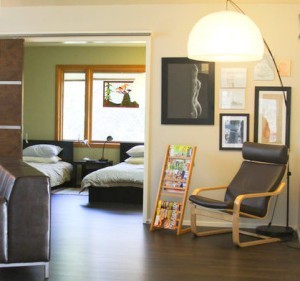 She then sat down and proceeded to instruct me on the use of all her fancy machinery and not only were Sam’s trousers ready to go for his first day at work, they looked as if a professional had hemmed them, if I must say so myself.

This would have been enough, but Michelle’s room was a private, contemporary retreat in relaxing shades of grey, taupe and brown. In the morning she served me a full breakfast at a small table overlooking a beautiful garden.

In the weeks that passed, Michelle recruited Sam to work with her on a community project and I know that both enjoyed and benefited from their time together. 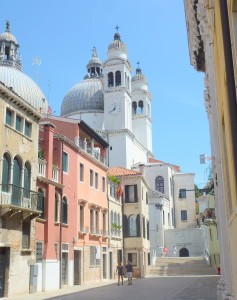 A walk in the Accademia district of Venice 2012

VENICE WITH A GUIDE

Sandra was the rental agent, but not the owner of the beautiful Venetian apartment where I stayed with my family on vacation this summer. It didn’t matter though. She met us at the vaporetto stop at Rialto Bridge, walked us through the twisty narrow streets and showed us around the place with the pride of ownership. The apartment was adorable and comfortable and perfectly located on a quiet street – not an simple find in Venice in August!

After tucking us into our apartment, Sandra could have left but instead she sat down with a big map and detailed the best places to see and restaurants to try during our abbreviated time in her city. Then she took me for a quick walk that turned into a personalized private tour of an architecturally significant building I never would have found on my own. No hotel can match this kind of experience. 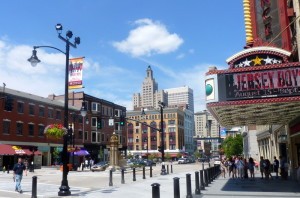 I’m not sure I can adequately describe the amazing Victorian treasure box where I stayed in Providence while dropping my son Joseph off at Johnson & Wales University earlier this month. It is Chip’s home but it is also a bed & breakfast. It is a parlor where guests play the grand piano, and it is an art gallery. It is a museum of whimsical antiques and collectables.

Chip’s home is also the first place I’ve stayed where the host had an aperitif waiting for me in my room. After spending a full day in parent orientation, I can assure you, alcohol was most certainly appreciated. 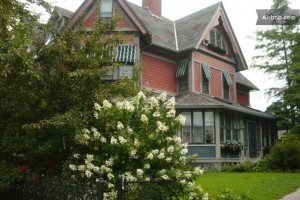 I took my sherry out into the side yard, sat in the gazebo while Chip’s cat perched on my lap and together we watched the butterflies and birds in the garden.

The following morning, a hot breakfast with coffee, fresh fruit and way, way too much other food was set on the dining room table and I was eating off china before dashing off for another day of parent/child separation anxiety. (Mine, not Joseph’s.) 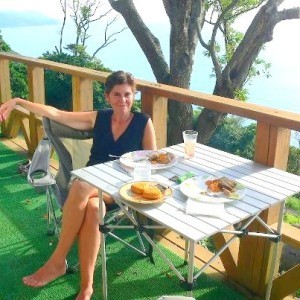 Enjoying the patio of an airbnb in Heda, Japan

These are just some of my stories, but every one of my Airbnb stays has been unique, providing me with a fascinating glimpse into the many different ways people around the world show hospitality. And if that isn’t enough, there is the ever present opportunity to enter the home of a stranger and leave the home of a friend.

6 responses to “Airbnb For Rooms and a Whole Lot More”