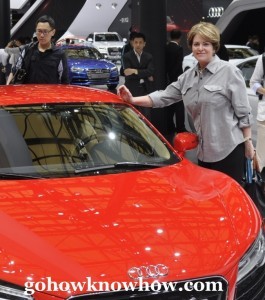 A fan of public transport, I loved the Shanghai auto show.

In New York, I ride the subway and buses. In Washington and Paris, I travel on Metro, and in any city with a bikeshare program, I ride a bike. Failing these, I take cabs. This routine gives me an excuse to brag occasionally about exercise, economy, and the environment. I’ve never been a “car person,” but a couple of hours at the Auto Shanghai 2013 could convert even a diehard devotee of public transport.

At the Shanghai New International Expo Center last weekend, buildings larger than airplane hangars were mobbed with adoring crowds wielding cameras. The event, recommended by a female staffer of the Ritz Carlton hotel, was a surprise highlight of my week in China.

Where to start? Without knowing most of the car makers or brands (Brabus? Chery?), I began at the building closest to the entrance. In other words, I followed the crowd. The cars shone like glittering shells scattered on a beach, backed by auto-themed videos that seemed as large as iMax movies.

The “Ant”, big enough for one woman and a large handbag.

The first car to stop me in my tracks was the adorable “Ant” from Chinese carmaker Chery, with three seats and tinted oval glass doors which open upward, bringing to mind an ant’s eyes. Renault’s itsy-bitsy town car had similar upward-opening doors (or were they windows?). The Ant’s three tiny seats would accommodate an average sized American woman and her handbag. With a billion plus potential drivers, I hope the Chinese find it as cute as I did. They might want something more upscale, though.

If so, they didn’t have to look far. Ferrari, Bugatti, Lamborghini, Bentley, Aston Martin and other luxury rides filled another huge hangar where racing videos with big sound effects couldn’t distract attention from the miniskirted models in stilettos sashaying around.

I was a little surprised to see several GMC models in the group of luxury cars, but several tour guides had already tipped me off to how much the Chinese like Buicks.

Getting back to the human models, who captured as much attention as the vehicular ones, I’m guessing the car show rule is the faster the car, the shorter the skirt and the higher the heels on the model’s shoes. Camera shutters clicked nonstop focused about equally between cars and models.

Armed guards in military-looking uniforms were positioned like sentries around the luxury cars, making me wonder how Mao Zedong would have reacted to the set-up. Today, his grandchildren could visit one of the many Aston-Martin and Rolls Royce dealerships in China. 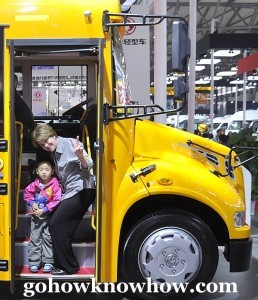 Ready to ride on this classic yellow bus.

I drive a Mercedes Benz, mainly because it’s reliable and offers 24-hour roadside assistance, so I thought I’d sneak a peek at the latest versions. I must have missed the cars, but saw quite a few of Mercedes’ workhorse vehicles, including school buses, ambulances and multi-passenger vans. It was fascinating, if kind of weird to climb into an ambulance voluntarily. Very posh.

In many smaller buildings, the parts manufacturers’ booths seemed sad and neglected after the energy of the new car displays. Representatives were reading newspapers, texting and even napping. An exception was a busy navigation systems booth showing GPSs with built-in TVs. English language newspapers in China have reported rising demand for navigators with TV screens in the driver’s line of vision. I guess multitaskers will soon be watching TV as well as texting and phoning while driving.

Auto Shanghai 2013 was a hectic mix of industrial design, glamour, color, people and style. I got an aesthetic rush wandering among the shiny, curvy, pristine new cars and mixing in with folks who get joy out of things automotive. So even though I don’t know my Havals from my Hawtais (both Chinese brands) and wouldn’t pay $5 million Rmb for the La Ferrari even if I was as rich as Croesus, I now “get” the appeal of a car show.

And then I went outside and breathed in all that smog.