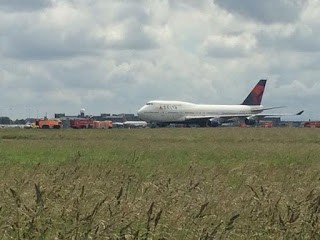 This just in: The Delta Air Lines Boeing 747 N664US which was heavily damaged by hail on a flight to Seoul Korea last month will return to the United States late this week but it appears her flying days are over. This Queen of the Sky, I am told, is headed for Marana Aerospace Solutions, a enormous boneyard for retired airliners north of Tucson, Arizona. For more on this story, read on.

This post has been updated with more information about the process of taking an airliner out of desert storage.

First its Arizona retirement was interrupted when it was called back to work to replace a hail-damaged sister ship during the busy summer travel season. Then the Boeing 747 N671US had to make an emergency landing in Shannon, Ireland.
Today I learned through a passenger scheduled to fly on this same jumbo, that his flight from Detroit to Narita was delayed due to problems with pressurization and air conditioning. The plane, you guessed it, N671US.  Two hours late, travelers did finally depart for Narita, but not on N671US, it was swapped out for another aircraft, presumably one in better shape. 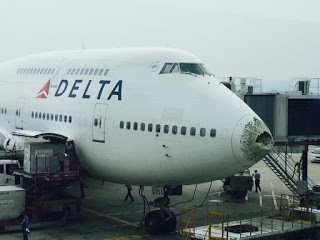 I’ve been following the near-constant news being generated by this 16-year old jetliner since it was flown to New York on June 28th from Arizona where it had been resting in the dry preservative heat at Marana Aerospace Solutions. (For my New York Times story on this boneyard, click here.) After 10 months at rest and five days of prepping in Minneapolis and New York, N671US began flying on the New York to Amsterdam route.

An experienced airline mechanic for a different carrier tells me this is a curiously short time to get an airliner back into fly-ready condition.”I’m sure the
ferry pilots filled the logbook with squawks of inoperative systems. Imagine
turning the key of a car after 6 months in the garage,” he told me, explaining that when planes are put into what is called “light preservation,” fluids are drained and moving parts lubricated with preservatives. “Batteries,
oxygen cylinders and fire bottles are removed. Openings are sealed,” he said. All of this has to be undone. “And they did this in three days?”
N671US is filling in for N664US, another 747 that became Delta’s when the airline acquired Northwest in December 2009. N664US flew through a high altitude hail storm while crossing the border from Russia to China. The crew observed weather ahead, but was denied clearance to fly around the weather by Chinese controllers. 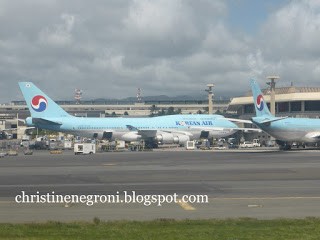 That 25-year airplane (now dubbed Hail Mary Two) is being patched by Korean mechanics in Seoul. Not a bad place for it to be considering how much experience Korean Airlines has with the Queen of the Skies. But whether she will ever fly again, remains an open question.

Read more of what I’ve written about the end of the line for the Boeing 747 in many airline fleets in this story from The New York Times, here. 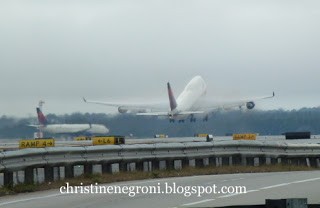