Face to Face with Young Cambodians in Siem Reap 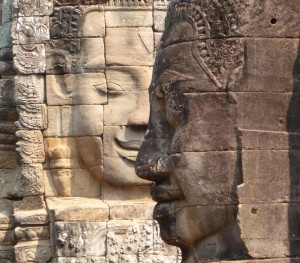 Faces of history in Siem Reap

I went to Siem Reap to see the ancient temples. My friend Marion Mapstone visited in 2012 and came back to show me photos that I couldn’t believe were of a real place. So don’t get me wrong, I loved climbing them, wandering through their aged stone walls, listening to the guide tell the stories behind the murals and carvings. But there’s something else in this city that’s not old and very much worth getting to know and that’s the young, animated and energized Generation X. 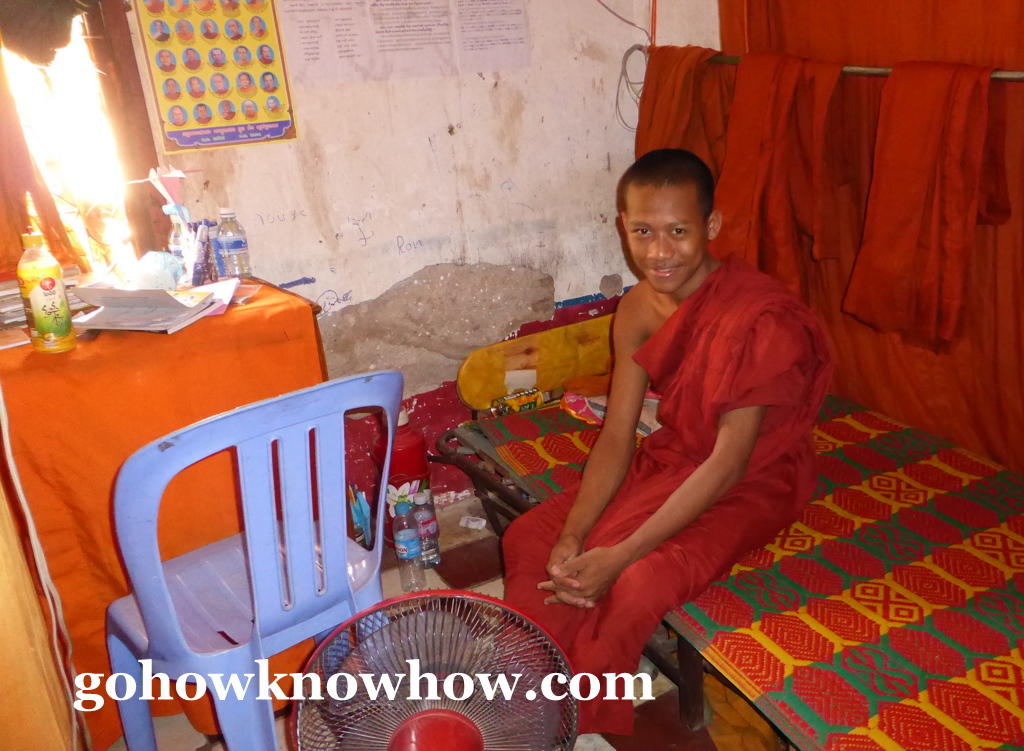 A student’s room at the Wat Bo school

On a late morning walk, outside of the tourist district, my husband Jim and I found ourselves in a Buddist school in the Wat Bo neighborhood. We said hello to a group of boys and one of them invited us to go in and see the little curtained area where he lives and studies. We communicated as best we could in smiles and sign language and assumed we’d seen the last of him when we said goodbye at the door.

He found us 10  minutes later, while we were wandering through the stupas (cylindrical grave markers) that filled a garden. He motioned for us to come up the stairs to the locked door of the big temple. He had the key and he wanted us to see inside.

Once he threw open the windows and sunlight illuminated the space, it was clear why he wanted to show it off. The walls were covered in painted murals dominated by tones of brilliant cobalt blue and mustard yellow. In the front, a huge golden seated Buddha presided and several smaller ones sat below. Even the wood carved shutters were elaborately decorated. 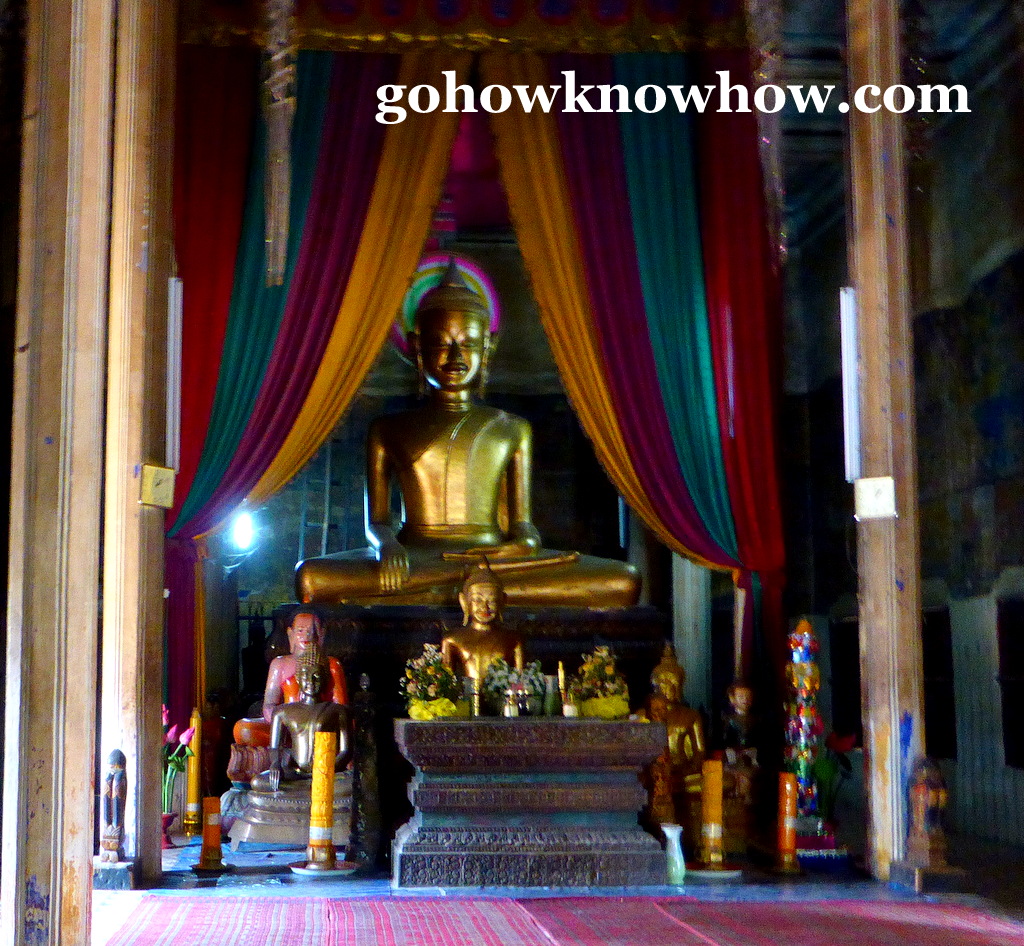 Then he took us to a small  museum not far from the gate we’d entered through. I wasn’t surprised we missed it. No one was inside and the lights were out. But he showed us display cases filled with stone pots, glass, jewelry, musical instruments and life size shadow puppets. These artifacts were collected by a monk named  Pin Sem, in an effort to keep traditional Cambodian art in the country and protect the artifacts for Cambodians.  This we learned from reading the English sign at the entrance. It was more than our young friend was able to convey. He did not need words, however, to share with us the pride he felt in his school and in the treasures among which he spends his days. 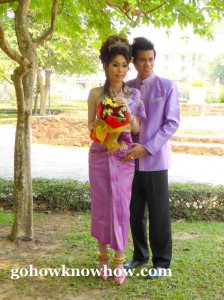 The bride and groom before the big day

Weddings always give a broad view of culture, so it was thrilling to come upon a wedding photo session in the Royal Gardens. The couple was focused on costume changes and looking just so, but we had a great conversation with the sister of the groom, mother of the groom and mother of the bride. Through young Teang, we asked lots of questions and answered a few, too; comparing notes on what its like to have a daughter soon to be wed. (Yep, that’s right, my daughter Marian is getting married!)

Had we been free to stick around for another week, we could have attended the wedding, I felt an invitation was in the offing. That would have been a pretty tempting proposition – not just for the food, music and company but also for the opportunity to see the three complete color-coordinated costume changes that is part of getting hitched in Cambodia. 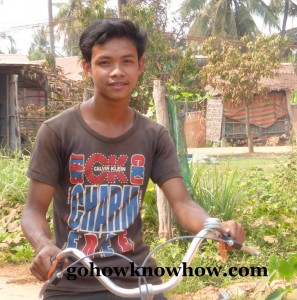 We took bikes along the dirt roads out of town

On my last day in town, I had another impromptu encounter with a young Cambodian who called me over as I pedaled a rented bike down a dusty road. “You want to eat dog?” he asked. The boy knows how to start a conversation. I did not want to eat dog but I was delighted to have him show me around the rural area he calls home, about 5 kilometers outside of the hustle and bustle of Siem Reap.

We pedaled over to the school he had attended and met the principal. Then moved on into the rice paddies where an aunt was raking the grains into a smooth single layer to dry in the sun. A little farther on an uncle or brother (it wasn’t clear to me) was pouring the rice into a huller that spit the husks into one pile and sent the rice down a chute and into a burlap bag. 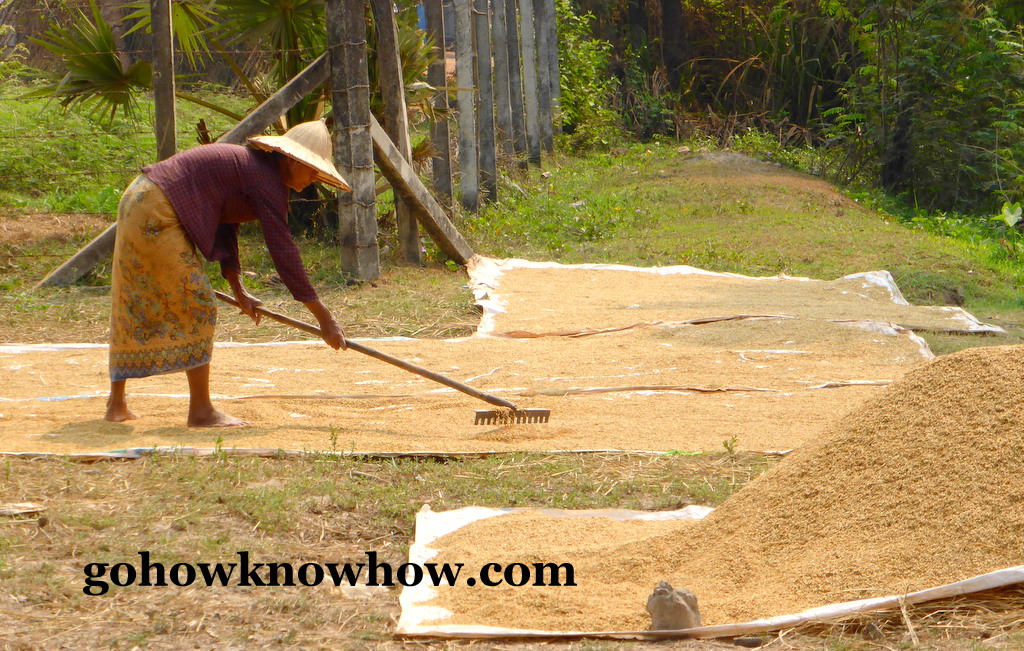 Spreading the rice to dry in the sun

As we pedaled on, the young man explained his goal of saving enough money to buy one of the ubiquitous moto-rickshaws that everyone in Siem Reap uses to get around. A moto-rickshaw would mean full time work and completion of step one towards the next goal; getting married. And, as if on cue, we heard party music rolling across the rice fields as a DJ warmed up for someone elses wedding later in the day. 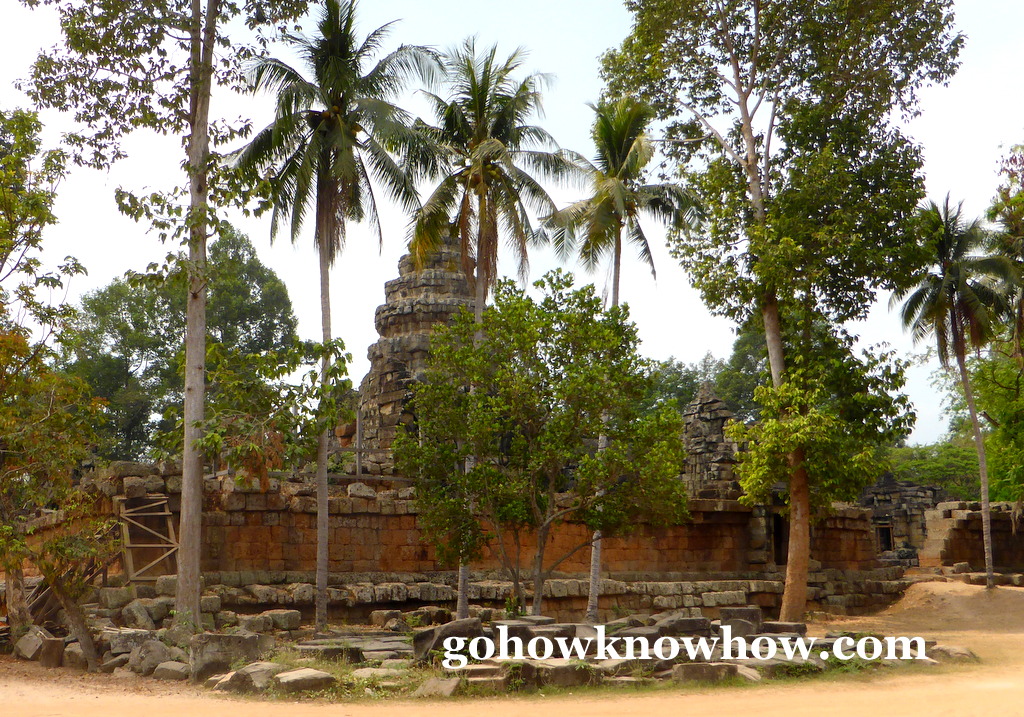 We rode for a while longer and then parked our bikes by a small temple where lizards skittered across the warm rocks. We viewed with approval the bubbling pots of soup, stew and rice being attended to by ladies outside the monastery.

On a small track, we got off our bikes again so my self-appointed guide could explain the sandy mounds with corrugated metal roofs. Here, he said, the dead will stay only until they are decomposed enough so that just the bones remain. They will be cremated and the ashes put into stupas. Burial is a temporary thing, I guess. 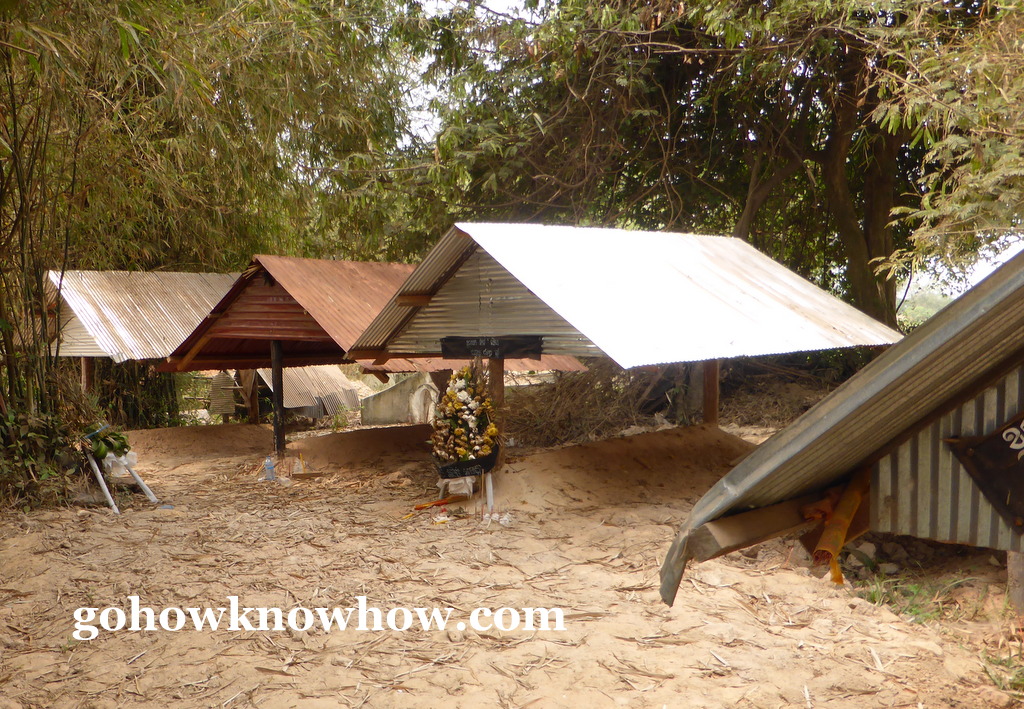 Bodies are buried in the sand temporarily 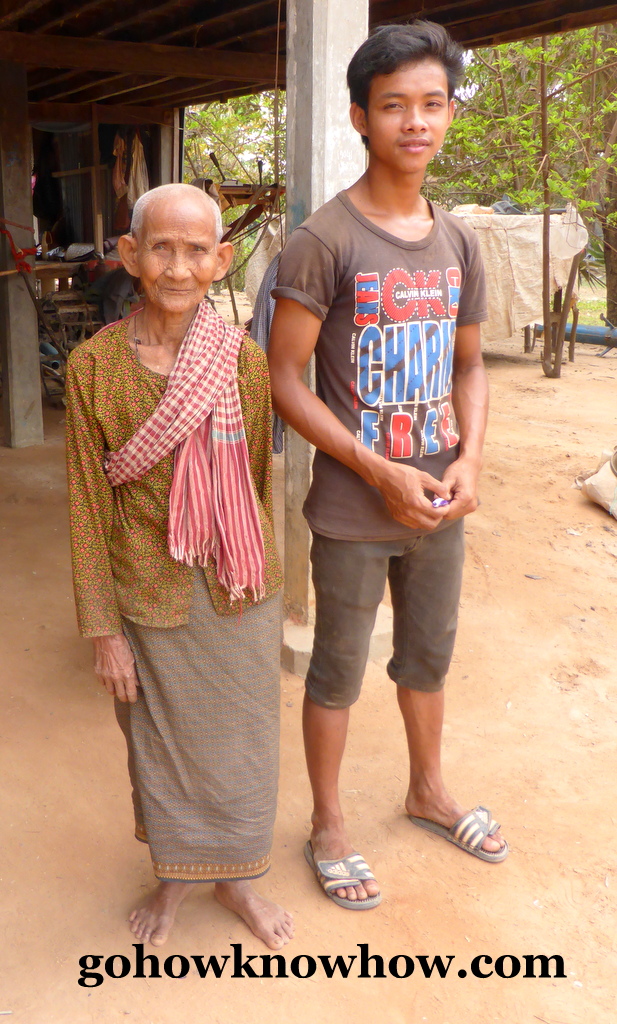 Grandmother and grandson pose for my camera

It was getting towards afternoon, and I had to get back to town, so I took my friend back to where I’d first met him, at the food stall outside his house. Whether he was truly selling dog, I don’t know and I don’t want to know. But I did enjoy meeting his grandmother, who looked like she’d lived every one of her eighty-something years. She agreed to pose for a photo with her grandson.

Young and old, short and tall, the picture was a metaphor for day.  In the span of three hours, we’d observed life from childhood to death with stops along the way to talk about food, agriculture, lifestyle and religion.

So while I’ll always remember the temples that are part of the area’s past, I feel just as blessed to have met some of the people who are an important part of Siem Reap’s future. 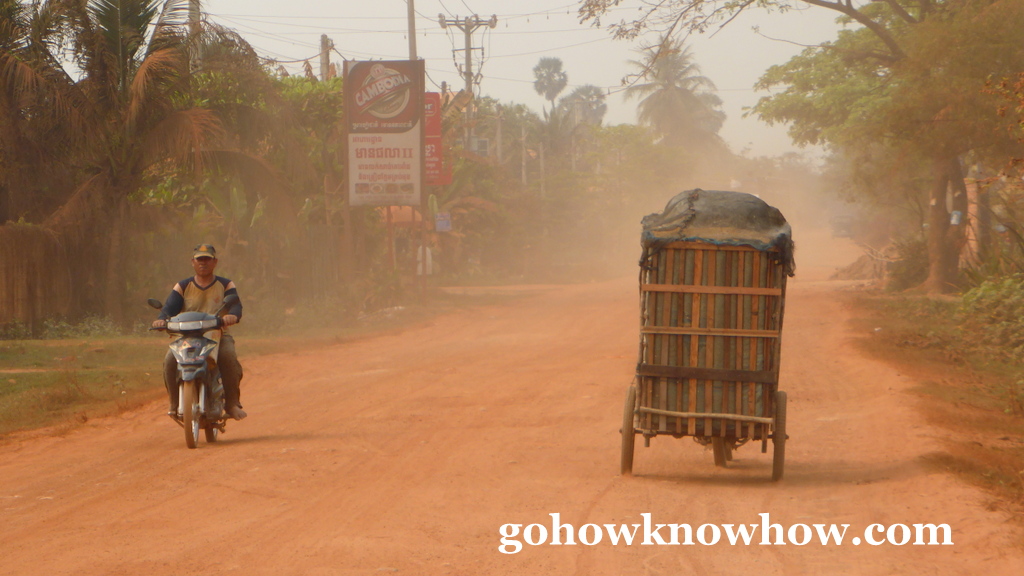 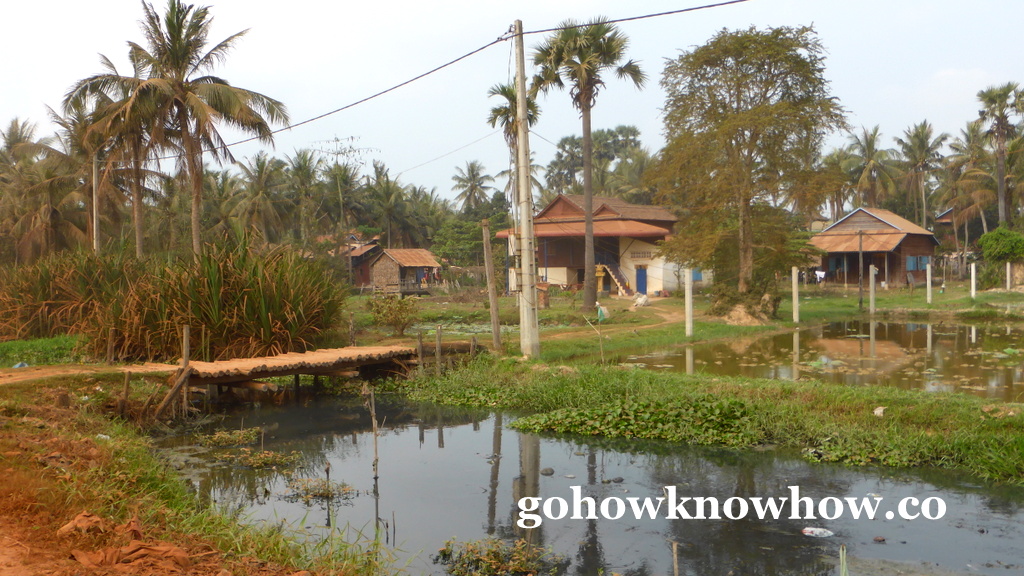 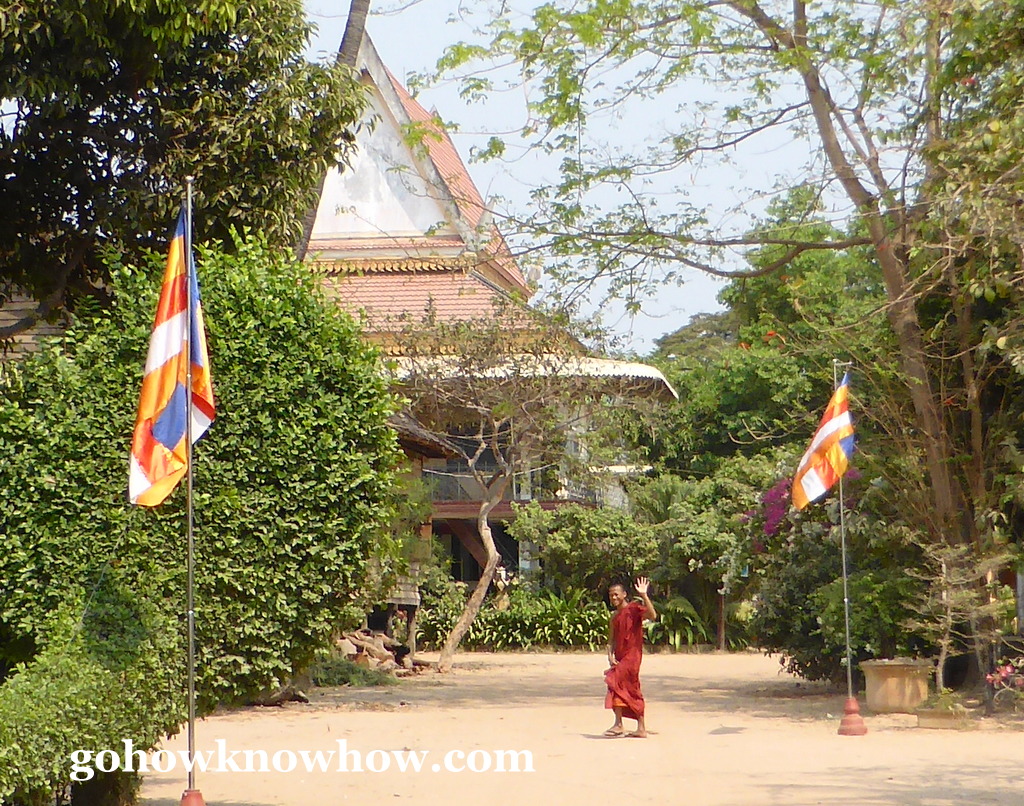