My Growing Affection for All That Flies 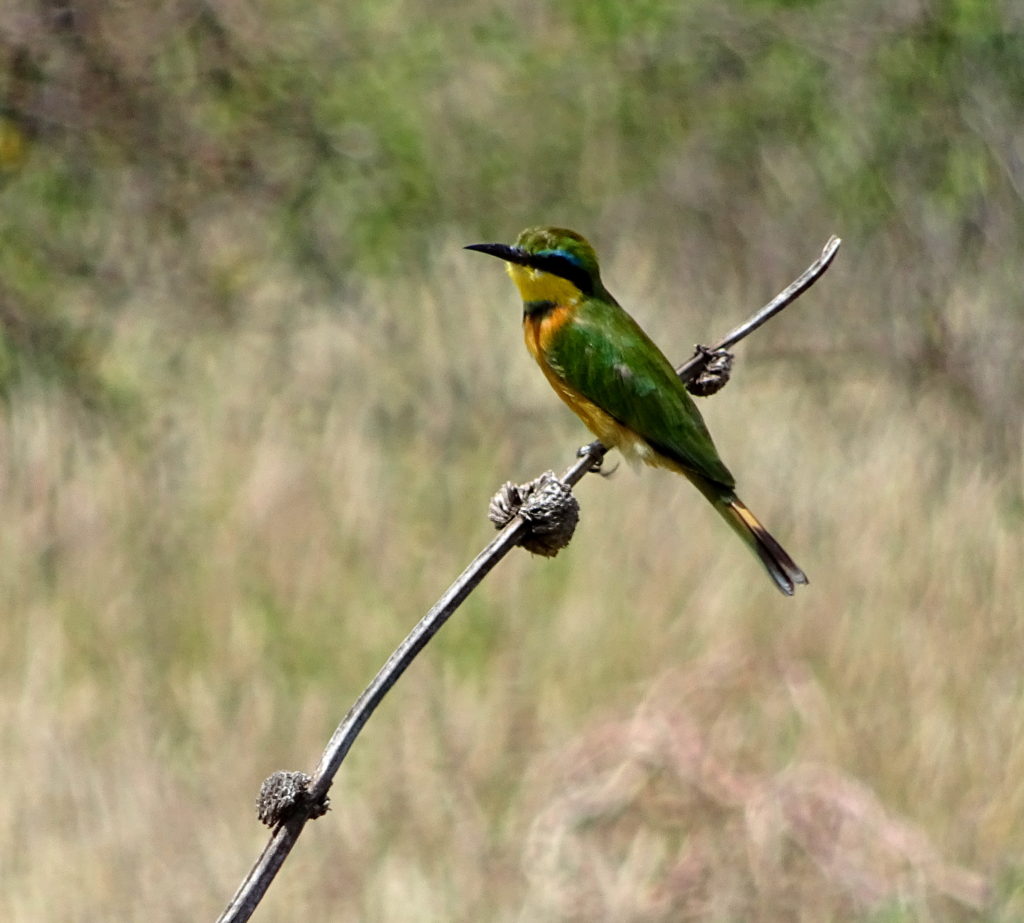 A Bee-Eater eats wasps and hornets too

For the past two decades I’ve had a passion for things that fly and that’s as it should be considering writing about aviation is how I make my living.

How birds arrived on my radar screen is not so clear, but on a trip to Gulf Shores, Alabama, I took a bike tour of Gulf State Park with Ted Floyd, the editor of the magazine of the American Birding Association.

As we pedaled along I was captivated by a beautiful grey blue northern mockingbird and a loggerhead shrike that was perched at the top of a long dead tree. Shortly after that, a bald eagle flew so close overhead I could actually feel the pressure of the air being pushed down by its massive wings.

Ted could recognize each song, including different calls made by the same bird. He could identify birds by shape and by location. 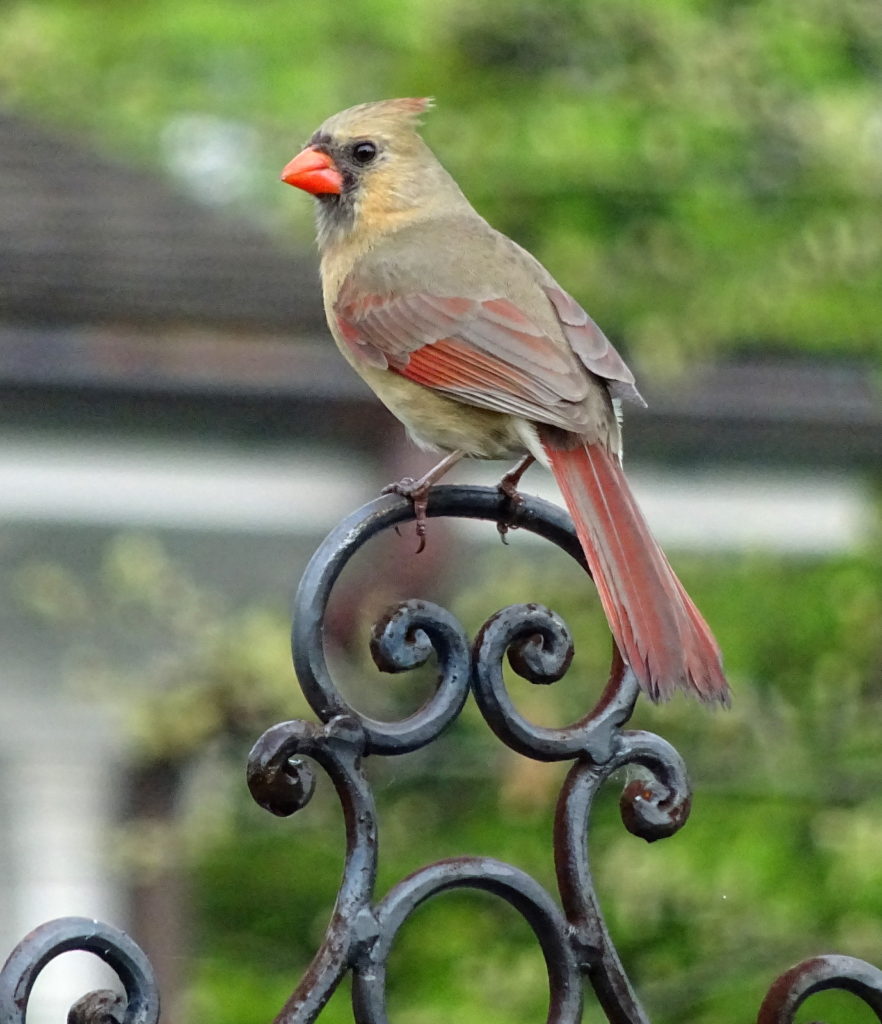 Until that trip, I had been content to sit in my home office and watch the goldfinches picking the remains from my dying Echinacea flowers or the cardinal nesting in the holly. But after meeting Ted, a passing interest in birds settled in to roost.

Last February, before leaving on an assignment in Kenya, I grabbed the binoculars off my desk and stuck them in my bag. I thought perhaps I’d see some interesting birds.

I have to chuckle at my ignorance. Lord knows Ted had a good laugh. When I wrote from Kenya’s Amboseli National Park to tell him, there were so many spectacular birds there, he replied with a gentle ho-hum.  “It’s like discovering that New York has many buildings, or that the ocean is deep, or that outer space is cold and dark.”

An aviation aficionado who assumed the most interesting things in the skies had motors, I was the accidental tourist at the ultimate birding destination. 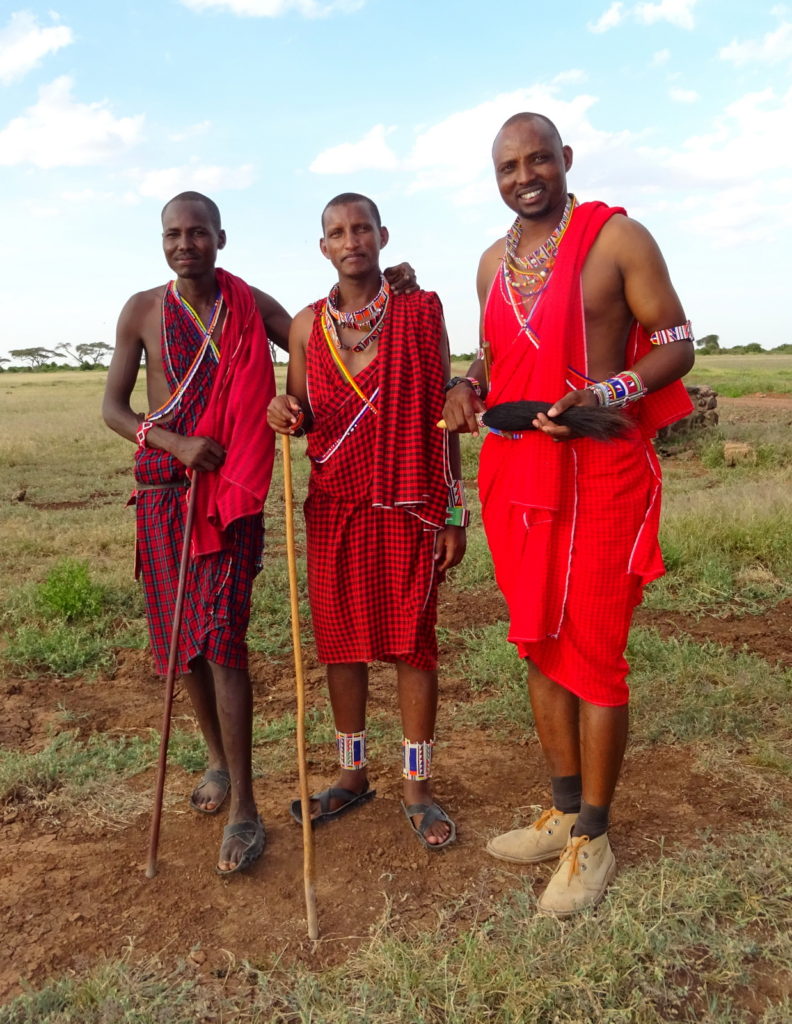 Visitors to Amboseli at the foot of Mt. Kilimanjaro are largely drawn to the park’s large resident population of elephants. During my visit, it was my luck to have Eric Ole Kalama of Elephant Garden Safari as a guide.

Eric  grew up in a Maasi village in Amboseli tending the family cows which pasture in the park during the day and are herded home at night to the safety of predator-proof pens.

“I would sit in the fields but watch the birds,” he told me of his long days with the cattle. “Always I wanted to know more about them.”

Kalama’s first job outside his tribe was at the Amboseli Trust for Elephants. There, program director Cynthia Moss noticed his interest in birds and gave him his first bird book.

As Ted had been in Alabama, Eric was the perfect guide for a fledgling birder. He indulged my enthusiasm for the brilliant, iridescent, blue-backed, red-breasted Superb Starling, which judging from its ubiquitousness and appetite for garbage, must be something like the Kenyan pigeon.

Eric had a way of knowing what birds I wanted to see again and again so that as we left the camp each morning, he would stop the jeep so we could admire the White Pileated Go-Away bird perched in the tree. Then we’d scan the nearby trees – often finding its mate.

My companions on the trip were less-than-enthusiastic about all the stops we made to gaze skyward, but Eric was politely oblivious to their impatience. 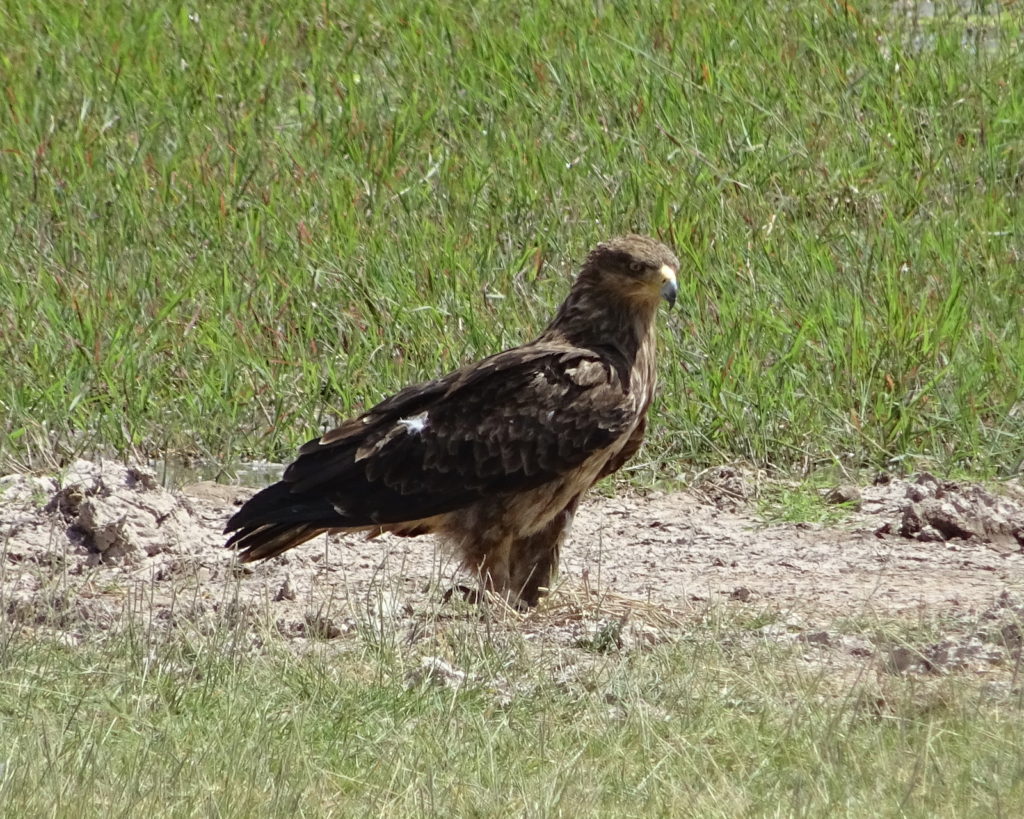 Early the first morning after spending a glorious few hours watching hundreds of elephants making their daily foray into the swamp for mud baths, we spied a large Steppe Eagle pacing the ground searching the tall grass for nests to rob for breakfast. Above, a nervous Blacksmith Lapwing repeatedly charged at the predator, to no avail.

We saw so many birds, I must confess, that some of those I conscientiously added to the list in my notebook, have faded from my memory. A Google image search shows me that the Speckled Mousebird is stunning, with a golden tuft and elegant tail. How could I have forgotten actually seeing it? And then I’m thankful that Eric stopped so many times to revisit the plodding Secretary Bird, the Grey-crowned Crane, the Hornbill von der Dickens and the Pygmy Falcon because they are firmly imprinted in my memory.

Of all the wonderful birds I saw the one I remember best I saw just once and from a great distance. Looking for it had come at the suggestion of Katie Rees, a frequent visitor. 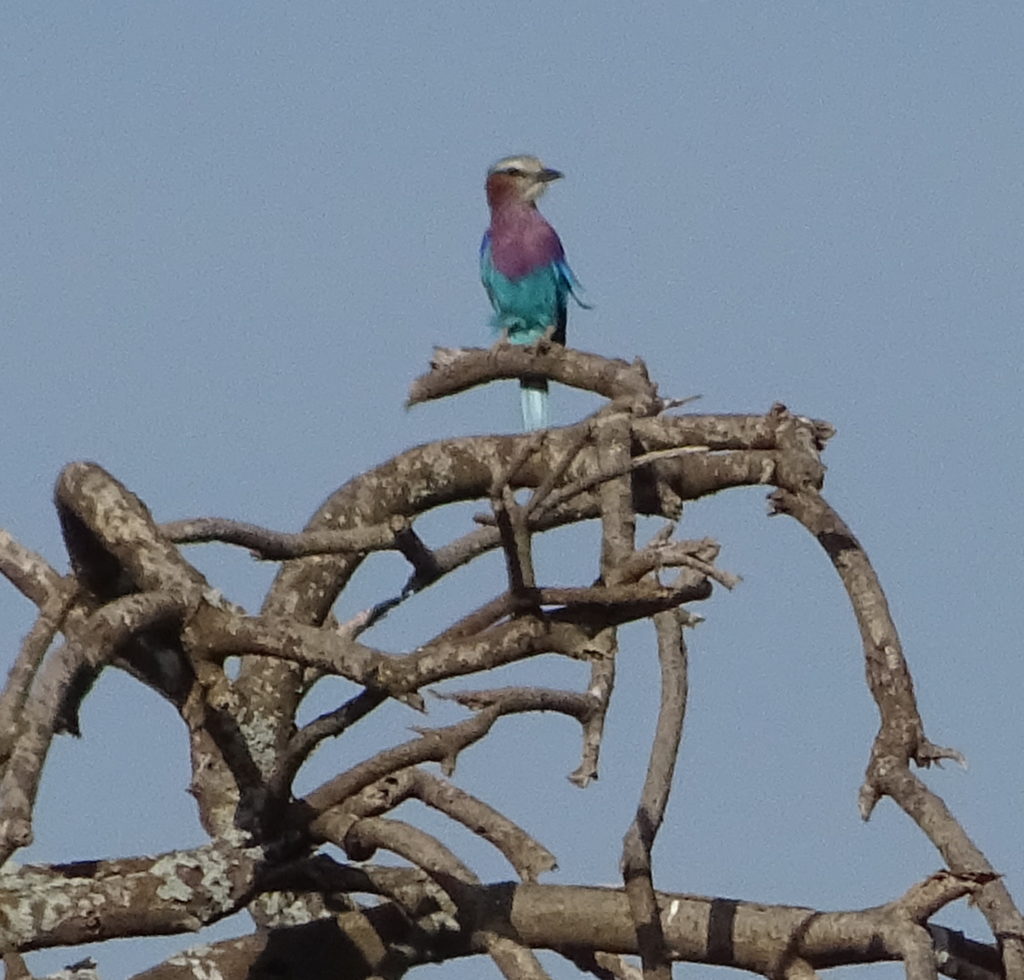 On a previous trip, she’d glimpsed a Lilac-breasted Roller and remembering its blue, turquoise, olive and lavender palette, she said this was the bird I needed to see to make my visit complete.

On my last day in the park, Eric drove no more than a mile, and then, as if pre-arranged, stopped the jeep and put his binoculars to his eyes. “There,” he said pointing at the top branch of a tree about 50 yards away.

Perfectly illuminated by the afternoon sun and contrasted against the dead branch on which it was perched was this fourteen-inch beauty.  As much as I appreciated the sight, I knew then that the magic was about more than the bird, it was also about the moment which seemed to have been summoned by the strength of our desire.

Inadvertent or not, the two men with whom I have shared time in nature converted my interest in birds into a passion. I anticipate the resulting dilemma; Where ever shall I look the next time I’m outdoors and an airplane and an interesting bird fly overhead? 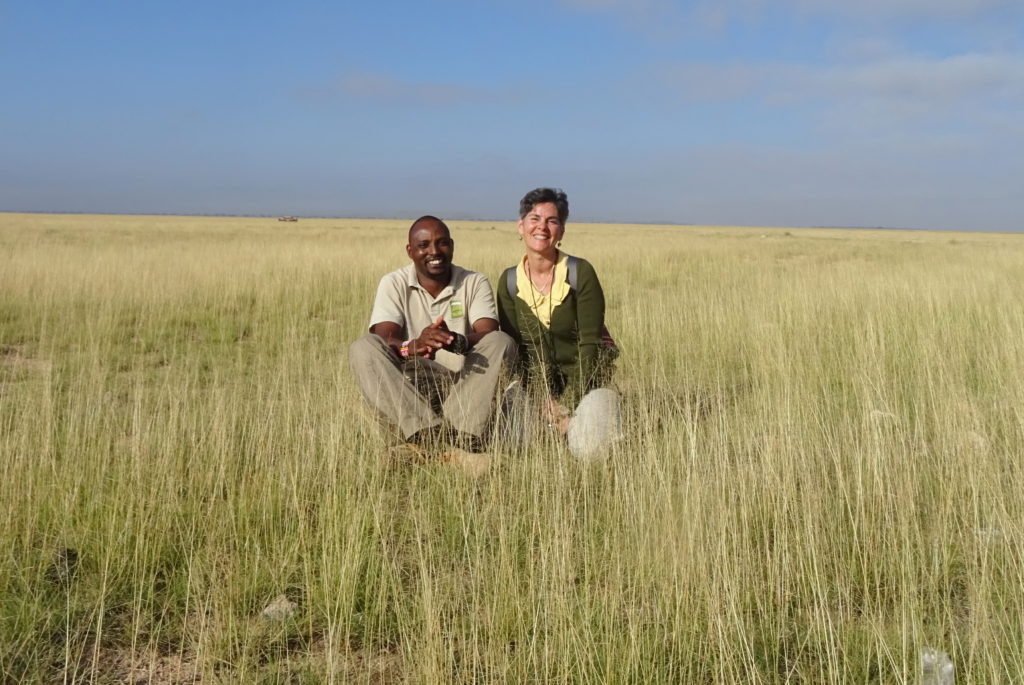 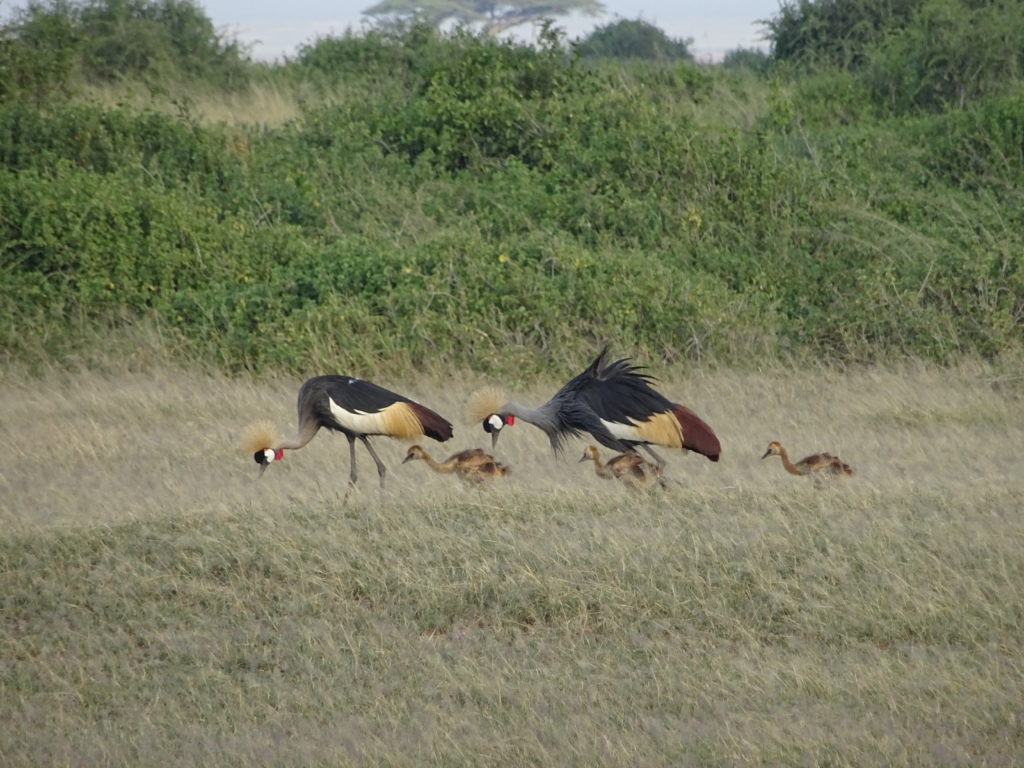 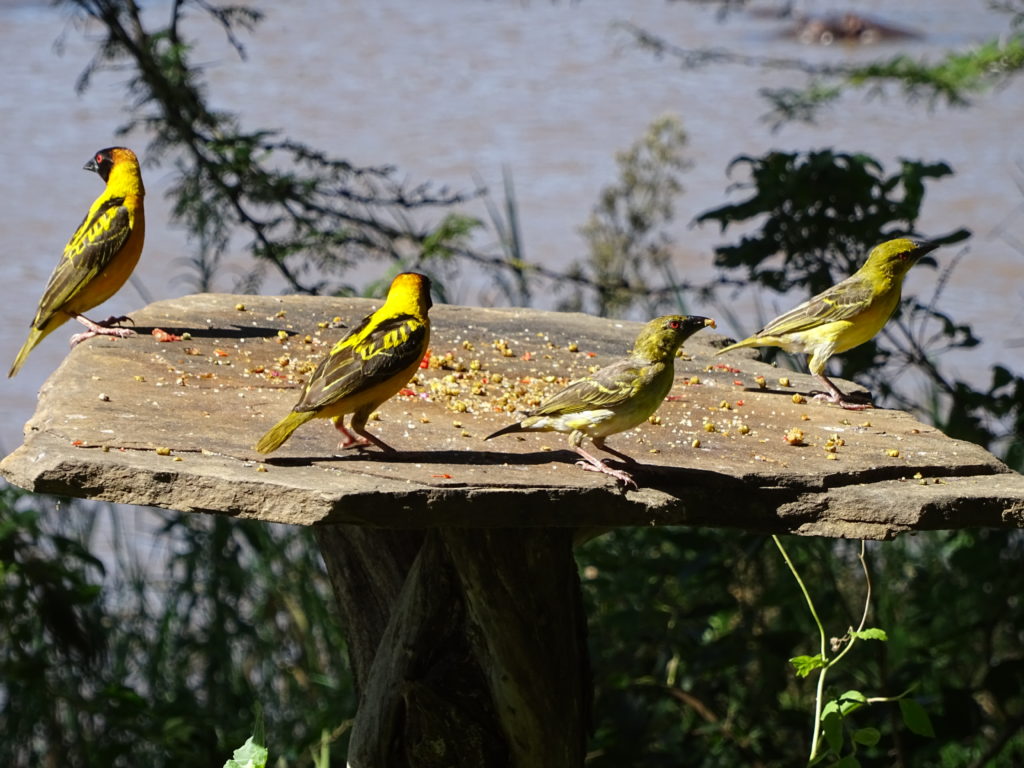 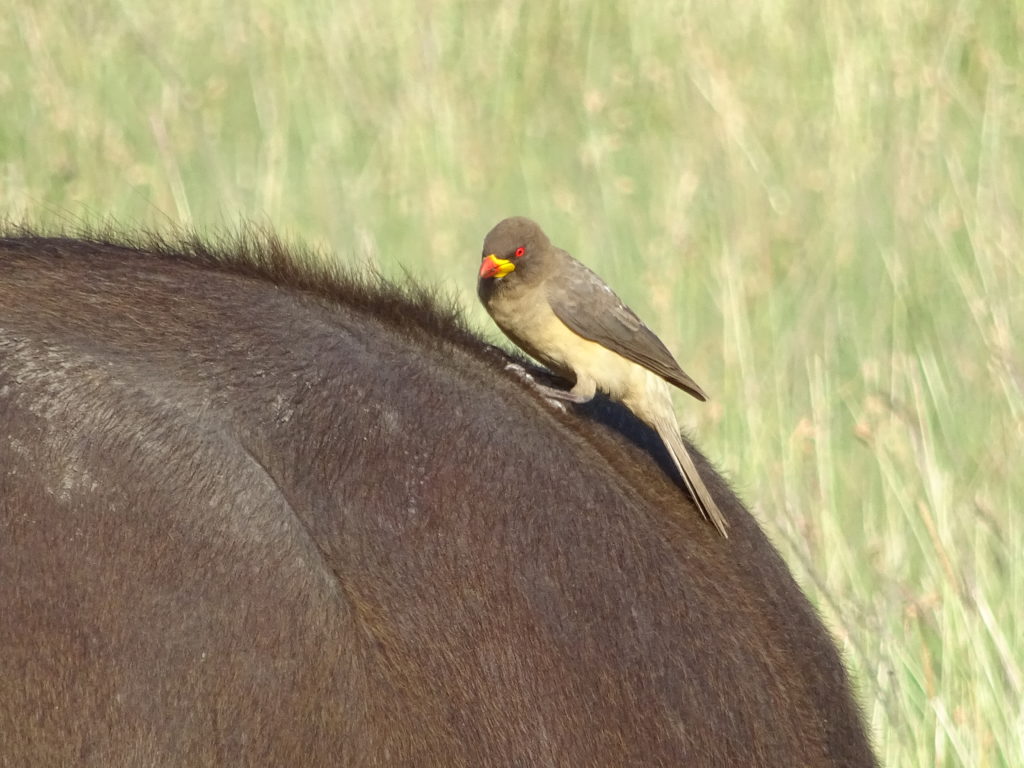 Yellow-billed Oxpecker eats parasites off Cape Buffalo and other mammals

One response to “My Growing Affection for All That Flies”