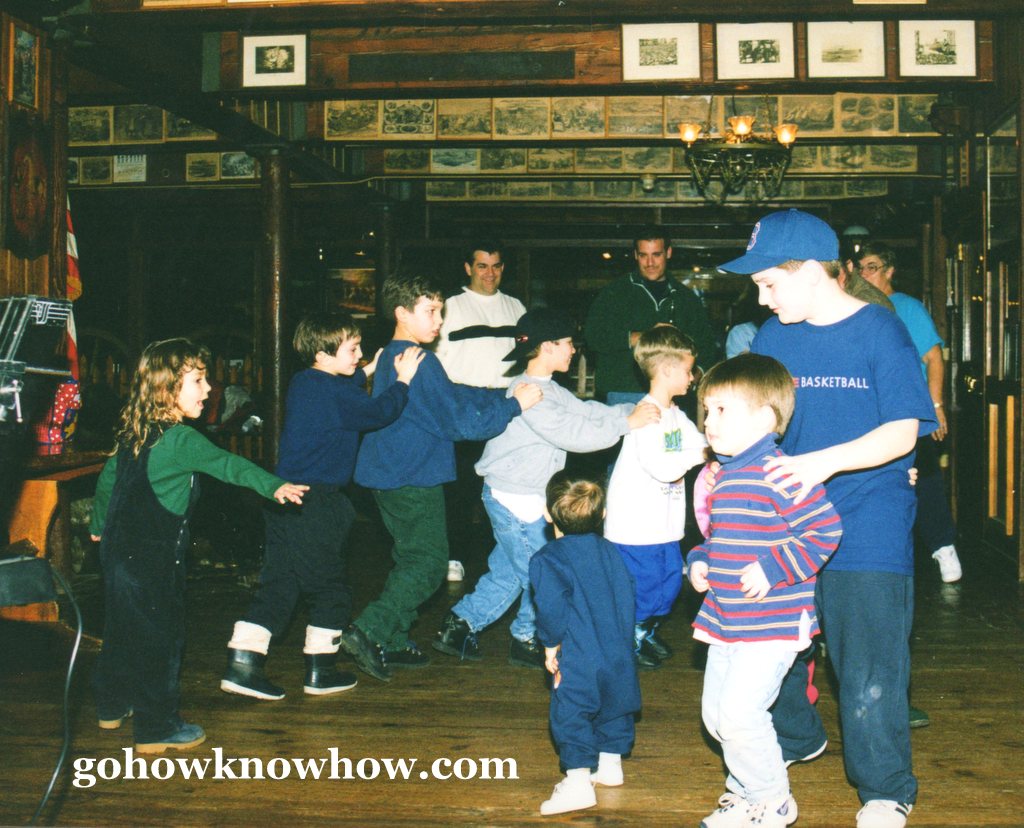 Not strangers for long everyone was dancing together the very first night.

When my kids were little we used to take them to Eastover Estate  & Retreat in the Berkshire Mountains of Western Massachusetts. Ignore the fancy-pants name, this was a home-spun, teeny-bit threadbare mom & pop resort – a place where three meals a day were served in the enormous dining hall, next to which was a equally enormous community space with fire place, game tables and 24/7 hot chocolate. 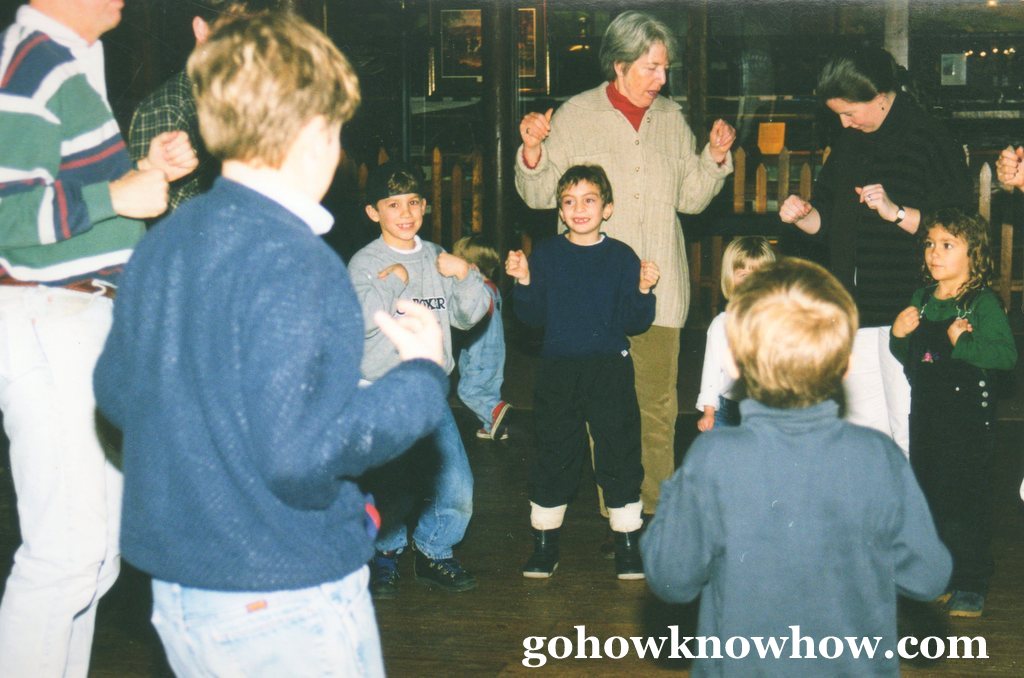 We all loved the place because it was like going to camp. Heck, we could do the same activities at home but throwing darts and dancing to Top 40 tunes in the resort’s wood-paneled rec room was more fun because we were doing it with people we did not know – but by golly, we’d be fast friends before the night was over. 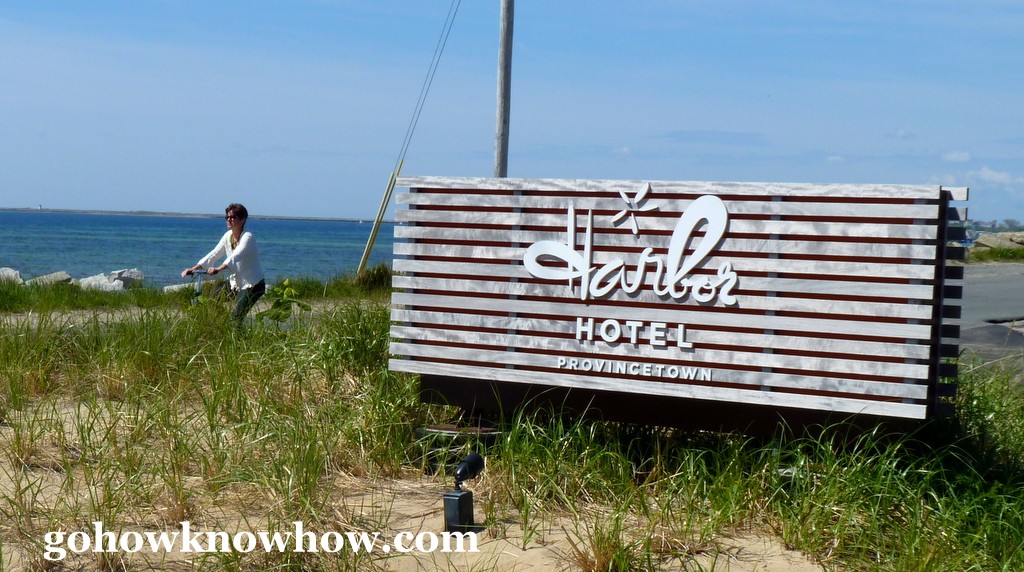 Eastover excelled at creating an atmosphere that encouraged people to mingle. I was reminded of how special that can be while traveling to two very different destinations this spring; Cape Cod and Cape Town.

On a weekend in late May, my husband Jim and I made my first-ever trip to Provincetown on the very tip of Cape Cod and stayed at the Harbor Hotel. This down-to-earth 1960’s style inn is gussied up with a fresh citrus color scheme that transforms what would be a charmless two-story motel into an inviting roadside getaway. Its all fresh and beachy-feeling.  They’ve accomplished the Eastover magic by encouraging guests to get to know each other. 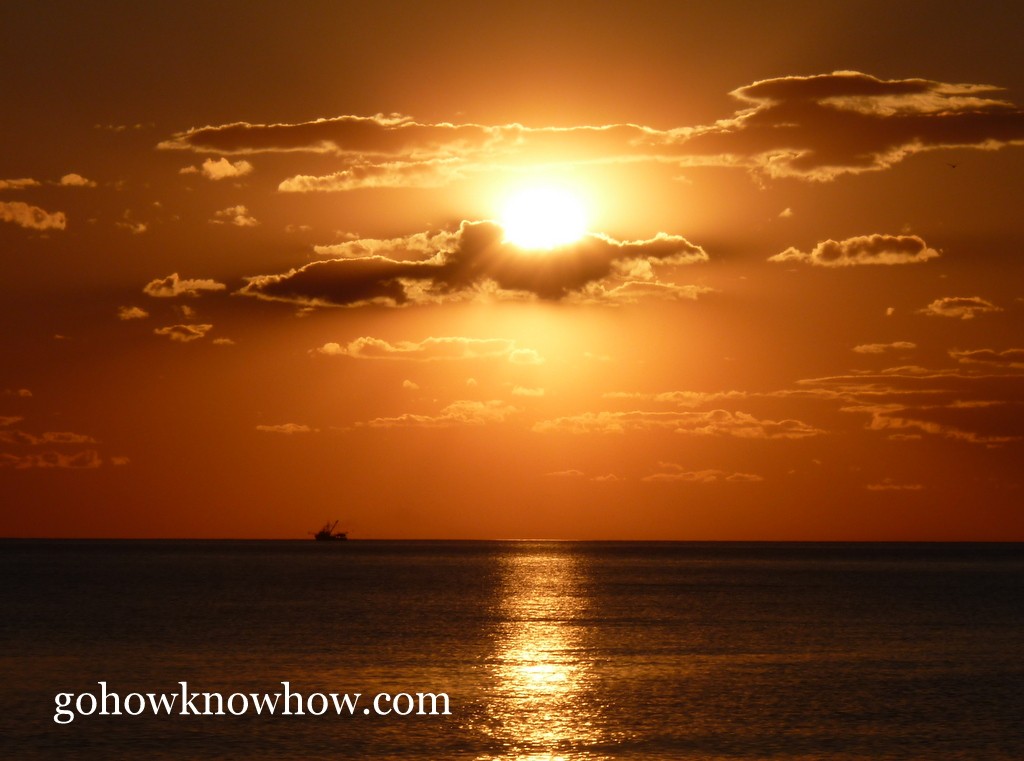 Sunset at Herring Cove is an evening’s entertainment

One evening after an exciting afternoon of whale watching, we took the advice of several locals and went to Herring Cove Beach for the nightly presentation of —  ta-da! —  sunset.  We returned to the Harbor Hotel still glowing from a glorious day of nature to find a fire going in the pretty gravel fire pit across the street from the ocean.  As we sat there, a number of other guests cycled through. Some had children with them, some had pets. They introduced themselves or shared the details of their day in a round robin conversation that provided a relaxing and inconsequential soundtrack to the warmth and light of the fire. 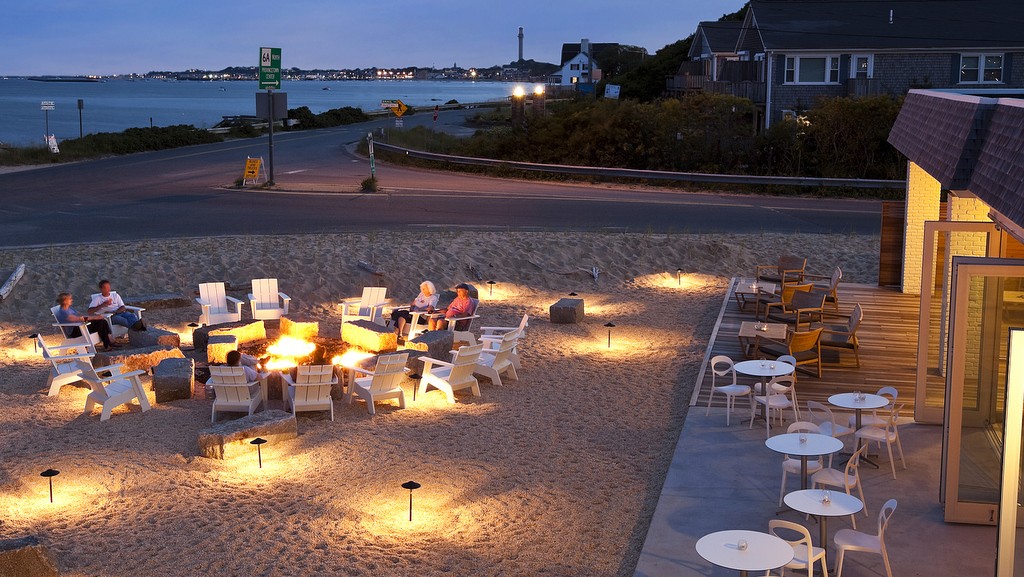 On another night, we made sure to be seated in the lobby restaurant by dusk, knowing that Thursday was weekly movie night. The waitress drew a curtain across the window-facing end of the dining room, and the bar became a makeshift theater for an equal number of hotel guests and local residents who appreciate the free movie and popcorn. The film Cloud Atlas with Tom Hanks and Halle Barry was the feature the night we were there.  Sure, we could have watched it on Netflix at home. What was it that made it so much more fun to share the experience? 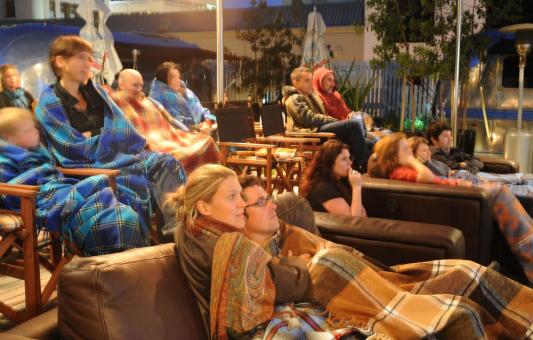 Bryony Schultz, general manager of the Grand Daddy hotel on Long Street in Cape Town, South Africa may have the answer. At her hotel, movie night at the Pink Flamingo Cinema is an often sold-out affair, even though the films can be a decade old. It is the setting that sets it apart, the outdoor rooftop bar at the historic downtown landmark.

Movie night also draws in guests who want to end the evening with a stay in one of the seven Airstream trailers positioned around the perimeter of the hotel’s roof. 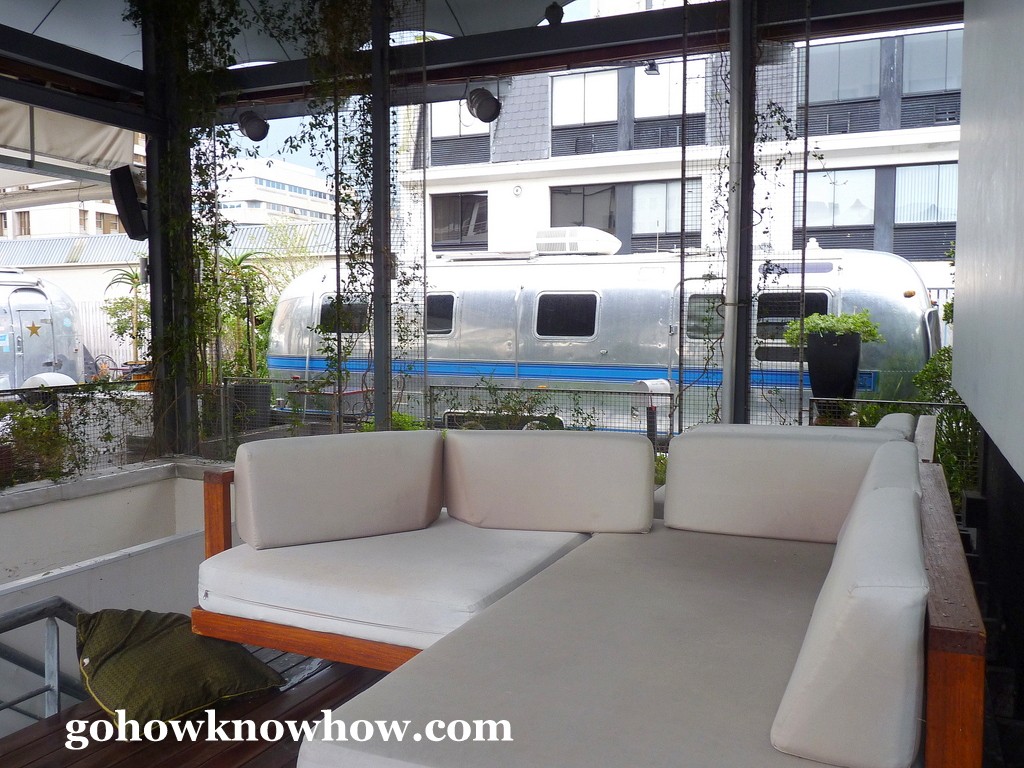 Each authentic 1960s trailer is a snug little room decorated with a unique theme. “Goldilocks and the Three Bears” was cute, “Afro Funk” verrry authentic, “Dorothy” with a pair of ruby slippers tucked under the sink was clever — even if the walls were a little too blue for my taste. 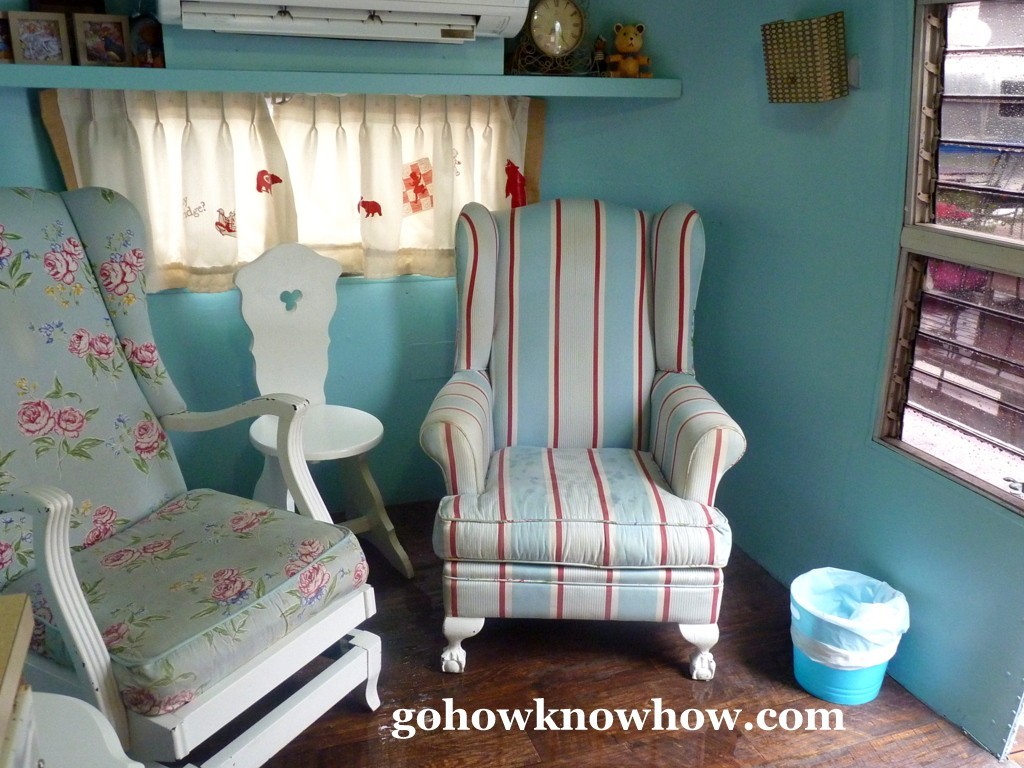 Chairs just the right size in the Goldilock’s room 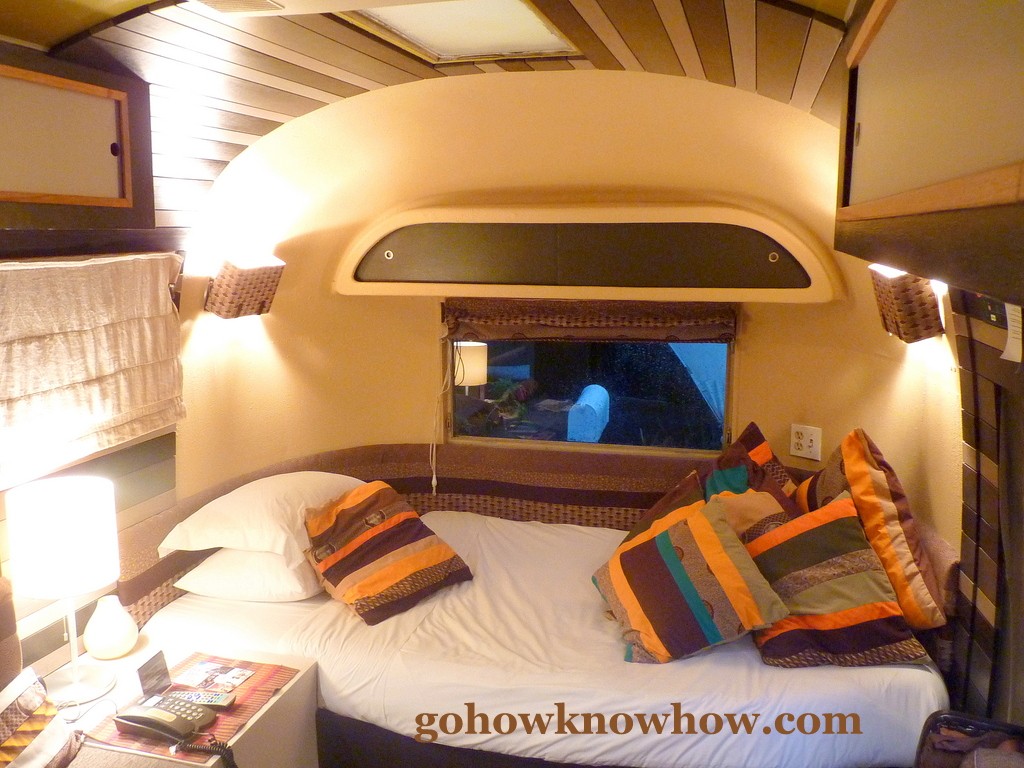 The uniqueness of these accommodations and the  international pajama party atmosphere for the outdoor movie puts the Grand Daddy on the list of must-see places for Cape Town visitors, according to Etihad’s in-flight magazine. 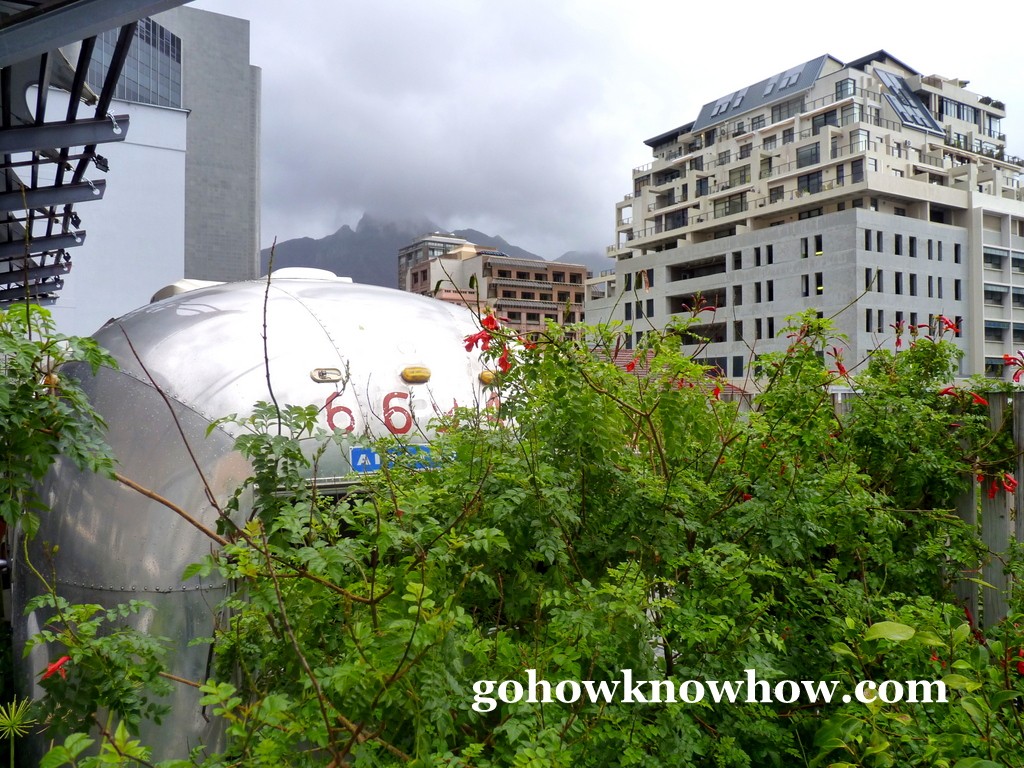 We travel to see different things and meet people who are not like us. Sometimes, though, it would appear we’re not so different from each other. Or as Schultz told the airline magazine about the success of Grand Daddy’s movie night, “Travelers always want to be able to mingle with the locals.”

From the rooftops of Cape Town to Cape Cod’s sunset shore, I suspect it is community that travelers truly seek. 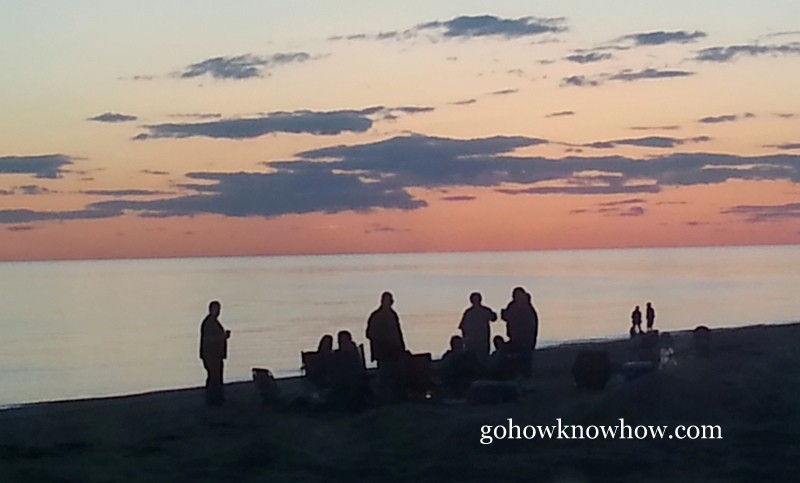 A crowd gathers to watch the sun set at Cape Cod

One response to “Hotels that Help Us Say, “Hello Fellow Traveler!””