How Many Chinese Does it Take to Build a Great Wall?

There are two ways to get up to China’s Great Wall at Mutianyu, north of Beijing. One can climb the 2,500 feet to get to the access point or do as I did and take the cable car.

Later, after more than an hour on the wall, as I gasped for breath and did a hand-over-hand final push to scale the last steps to the point where further access was restricted, I realized I’d made the right decision by riding the first leg.

That I, a woman who walks 4 miles every day before breakfast, was puffing like a steam engine on the final stretch should tell you that this is not a climb for sissies. But was it worth the effort? Yes indeed.

Like the Leaning Tower of Pisa and the Pyramids, the Great Wall of China is a destination so widely known that it took time on first arrival for me to actually process the fact that I was really, truly there. Amid the lush green surroundings, I was placing one foot after the other on the stone tiles laid by so many, long since forgotten men. The longer my legs and lungs labored with the 45-60 degree angle of incline and irregularly stacked but seemingly endless steps, the more impossible it became to imagine how those men ever got the heavy stones and bricks up the mountain to begin with.

The power of numbers could not be any more visible. One million men can do what fewer might never attempt. 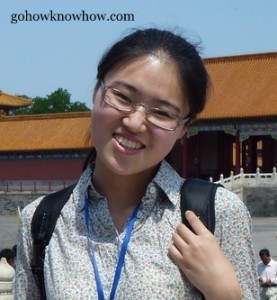 When I was still fresh enough to carry on a conversation, I told my Kensington Tours guide, Jasmin Wang, a story from a book I am reading called China’s Wings.

In the book, author Gregory Crouch recounts how an army of Chinese laborers moves a crippled DC-3 airliner into the woods to hide it from Japanese attack planes during World War 2. They do this by carrying the airplane three miles. (The story gets even better but you’ll have to buy the book and read it for yourself.)

Any people who can heave an airliner by hand can build a wall in the mountains or do whatever the hell else they set their minds on doing.

Yoni Falkson, a New Yorker visiting China to celebrate his first wedding anniversary, joined me at the top of the climb and we recorded our ascent by taking photos of each other. I complained my legs felt like jelly but he was tough, he’d already walked from the parking area to the access point, (no cable car for him and his bride) a total – at that point – of 8100 steps, according to his electronic counter. I’m guessing 75 percent of those steps were vertical.

I took it easy on the return trip, stopping often to take pictures of the Chinese brides who were at the wall in full wedding regalia for their official wedding photographs.

I lingered admiring the tiny lavender flowers and made friends with a little girl who was full of pep, unlike me. 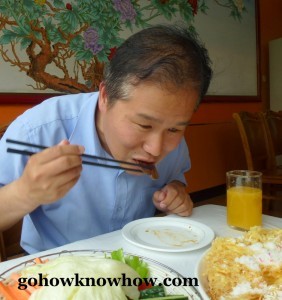 Yup, driver Zow Yong is eating donkey meat, but I didn't like it.

Bushed, I collected Jasmin, who had allowed me to make the walk alone, and we headed for lunch at Xiao Long Pu – the Dragon Waterfall restaurant in the town that serves as launching pad for Great Wall hikers.

I didn’t like the donkey meat though our driver did. The corn cake dusted with sugar and sprinkles went down fine as did a bottle of beer big enough to swab down a mighty portion of the wall and still have enough to float a DC-3. This I found entirely fitting with the mood of the day.

2 responses to “How Many Chinese Does it Take to Build a Great Wall?”