Kimberly Needs Help to Save Your Life 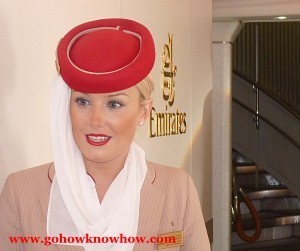 The last story I reported for The New York Times and the one running tomorrow, talk about the amenities offered to fancy pants fliers, the folks who get to sit on the front end of the airplane and I’m not talking about the pilots. Premium class travelers get lots of jazzy extras including the services of flight attendants like Kimberly who works for Emirates. If asked, Kimberly will make the cushy business class seat into a lie flat bed and put the linens on for you. Yep turn-down service at 36,000 feet.

But there’s something else that Kimberly will do that is even more valuable. Kimberly can save your life.

Randy Babbitt didn’t mention Kimberly, of course, but this is the crux of the message the Federal Aviation Administration‘s boss, delivered in a joint statement with the president of the Association of Flight Attendants union, Veda Shook.

Because too often flight attendants must often be the “voice of no” – NO, you can’t switch seats, NO, Coca-Cola isn’t free, NO, you cannot recline your seat back, go to the bathroom or use your cellphone – travelers have tuned them out in much the same way that my children tune me out when I tell them to clean up after themselves. I don’t like being a nag, and neither do the flight attendants. Nevertheless, turning airline passengers into beings who will take responsibility for themselves is part of the job; a big, thankless, part of the job.

That responsible behavior doesn’t come naturally to all air travelers is evidenced by the fact that Shook and Babbitt, presumably busy honchos of their respective organizations felt the need to issue today’s statement. After all what does it say that we haven’t heard before?

These instructions, the white noise of pushback, are largely not followed.

The FAA tells parents that babies under 40 pounds should be in safety seats, the thinking being that engineers who have worked for decades on the problem have designed a more effective restraint than parents’ arms. Meanwhile mom and dad keep bringing children onto the airplane and rolling the dice.

The FAA tells travelers to keep seat belts fastened all the time, even when the seat belt sign is turned off. The photo below I’ve used in posts to illustrate the use of electronic devices on airplanes, which I’ll get to in a minute. 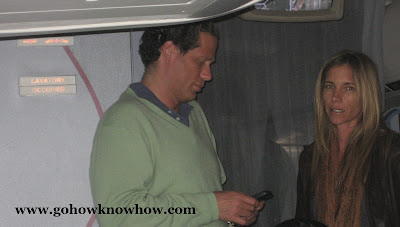 But what I want to point out in this photo today is that while the PED user and his companion are happily sharing whatever interesting information is on the tiny screen he is holding, behind him the “fasten seat belt sign” glows heedlessly behind them. That is why I took the photo. I was just waiting to see how long it would take Mr. and Ms. Oblivious to recognize that when the flight attendant asks everyone to return to their seats and fasten seat belts he was including them, too.

You’ve read my reporting on the potential for consumer electronics to interfere with flight instruments before. (You haven’t? OK, go here, here and here.) Another, as yet unexplored risk is how these devices can divert the attention of passengers, and even prevent them from hearing emergency announcements. Unlike airplane-supplied entertainment where the audio portion is overridden by the cabin communication system, to get the attention of passengers tuned into their own audio would require a person-by-person check of the entire airplane. 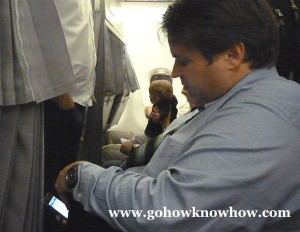 Safety issues on airplanes: babes in arms and devices in hands
On a recent flight to Oklahoma, I watched a young man talk on the phone until the time the flight attendant asked us to turn them off. At which point he put away the phone and plugged into his iPod

Look, as the new owner of a Kindle

, I’m as tempted as anyone to power up my gadgets as soon as possible, especially during that long wait for takeoff. But using these devices is not without its downside, distraction being a very big one when used in a variety of places from texting while walking to bus driving while reading.

With the summer travel season about to begin, the simple message from the chief aviation safety executive and the men and women who must turn his policy into practice is this: when it comes to aviation safety, a flight attendant like Kimberly can save your life. But she can’t do it without your help.

3 responses to “Kimberly Needs Help to Save Your Life”