Let’s Get Loud in Beijing -Together

I couldn’t know it at the time, but that dinner served to me on Air China Flight 982 to Beijing would typify my experience during my week long stay here. It was an unassuming little plate of vegetables, cooked vegetables, not my favorite way of eating greens frankly. But I took one bite and was pleasantly surprised. They were delicious.

On first glance, Beijing is the same way, vaguely familiar as large urban centers are anywhere in the world, some traditional buildings, some modern, some over-the-top, “what was that architect thinking?” and lots of people. This is China after all.

It’s the second glace, the turn-in-to-an-alley-and-see-what-you-find that is consistently and unexpectedly, delightful.

In my opinion, Beijing is most charming because of the affection for music and movement exhibited by residents and their tendency to engage in these interests in public, en masse. Let’s take exercise, for example. 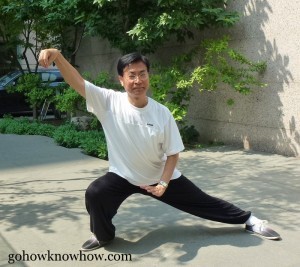 My Tai Chi instructor gets down and expects me to do the same.

On my third day in Beijing, Kensington Tours, a Canadian company specializing in customized itineraries, arranged for me to have a private tai chi lesson; just the basic moves, really. But it was a great overview and instructive in that it showed me how what appears to be a simple, low energy activity is actually pretty-darn exhausting.

As we did our lesson in a outdoor alcove by a Starbucks, I noticed people in the coffee shop watching us. I assumed it was amusement at the sight of a middle aged Western woman clumsily tackling this graceful, ancient Eastern martial art.

Ditto for dancing, singing, playing board games, getting a massage and taking one’s pet bird out for a walk.

Men gather in the parks to show off their birds.

Badminton played at a park in Beijing.

Everywhere I turned in Beijing, another group was engaged in doing something together and on several occasions I was urged to participate.

Every day is boogie down day in Beijing

“Welcome to join,” one man about my age said as I watched him and 20 others jiving. Had I not seen it with my own eyes, I would not have believed that Jennifer Lopez’s “Let’s get loud,” could be danced to with such restraint. But this dancing is not of the hip swinging kind.  Imagine calisthenics, but fun.

The ribbon dance is beautiful.

When I stopped to photograph some women moving to a Chinese beat while spinning long colorful silk ribbons  into elaborate shapes, an elderly lady forced the ribbon into my hand so I could give it a try. 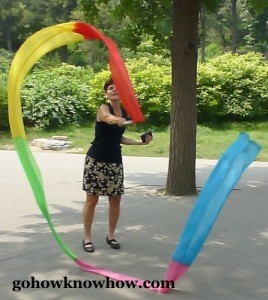 Ok, well it's not supposed to look like this

Then she pried my camera from my fingers to photograph the result.  Like tai chi, making the ribbon perform is a lot more difficult than it looks.

If the Beijingers weren’t dancing they were singing. I dashed down a hillside  at Jingshan Park when I heard a haunting tune with a pulsating beat in the distance. I loved the sound and didn’t want who ever was making it to end the concert before I got there.

I need not have worried. The little band was in no hurry to leave. Nor was it alone. One group of musicians was performing inside a covered picnic area, another was playing on the outside. Neither seemed even slightly miffed that the music was bleeding over.

An impromptu concert in Jingshan Park

During my walks through the parks of Beijing I found people amusing themselves and each other in a variety of ways. At one particularly rambunctious square there was a badminton game going on, several people were getting back massages, another little band was performing. All of this activity was decidedly non-goal oriented. How else to explain the men who use a damp mop-like swab to paint images on the pavement that evaporate within minutes of their creation?

Painting with water, hold the color.

With a population of 20 million people, I’m surprised that the people of Beijing are not weary of the company of their fellow citizens, quite the opposite. The backstreet hutong neighborhoods may be congested, the highrises packed to the rafters but give these folks decent weather and outdoor space in which to enjoy it and a thriving community is on display and everyone, resident and visitor alike is welcome to participate.

Massages in the park in Beijing.

5 responses to “Let’s Get Loud in Beijing -Together”