The Magical Effect of Music and Mozart in Salzburg 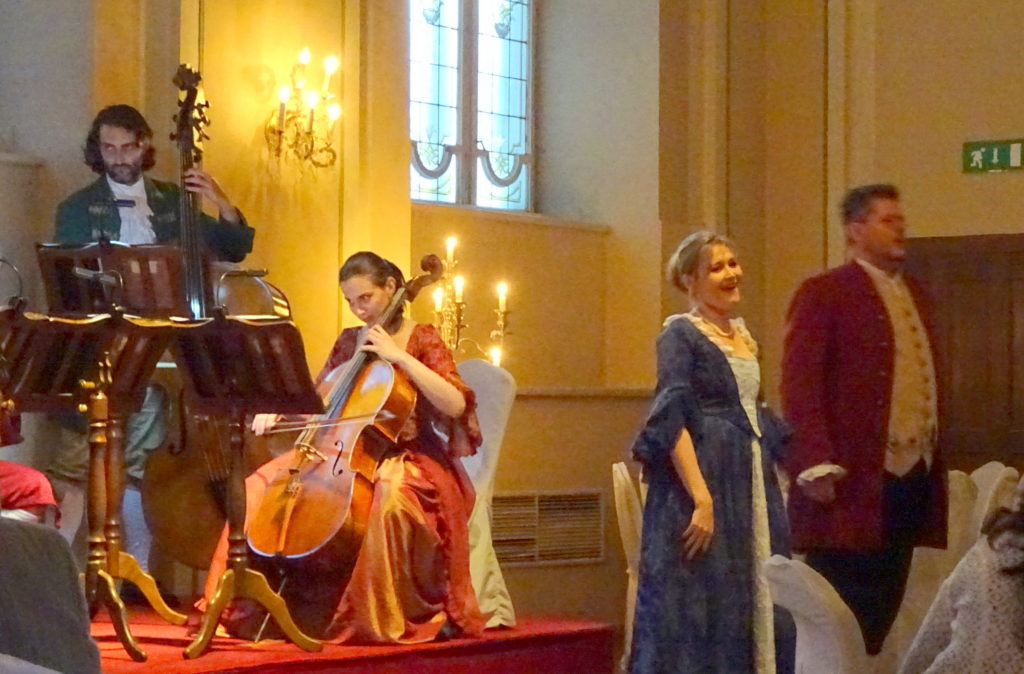 Tom Hook, the New Orleans jazz pianist, sitting next to me at the Mozart dinner concert my last night in Salzburg, Austria, explained his presence at the event with a smile and probably some understatement, “I am familiar with Mozart’s music.” Sure, there’s a gulf as wide as the Atlantic Ocean between American jazz and the music for which the 18th century composer Wolfgang Amadeus Mozart is so famous, still, I have little doubt my dinner companion knew far more than I about Mozart when he arrived in Austria.

In a room illuminated by candlelight, two singers, garbed in the costumes of the day sang pieces from three operas, Don Giovanni, The Marriage of Figaro and The Magic Flute, to the accompaniment of a six-piece string ensemble. The performers were pure 21st Century in the way they reached out to engage even non music lovers in the room with the work of the city’s most famous resident.

Two months earlier, I joined 100 other voices in a Good Friday performance of Mozart’s magnificent Requiem at Stamford’s First Presbyterian Church. Singing the music and understanding it’s creator are two entirely different things, however, so I dedicated the 24 hours before the Mozart dinner concert to learning everything I could. In Salzburg, that is easily accomplished.

On arrival and during my stay, I repeatedly passed the gaze of Mozart printed on the foil-wrapped chocolates that display his portrait and are sold everywhere. 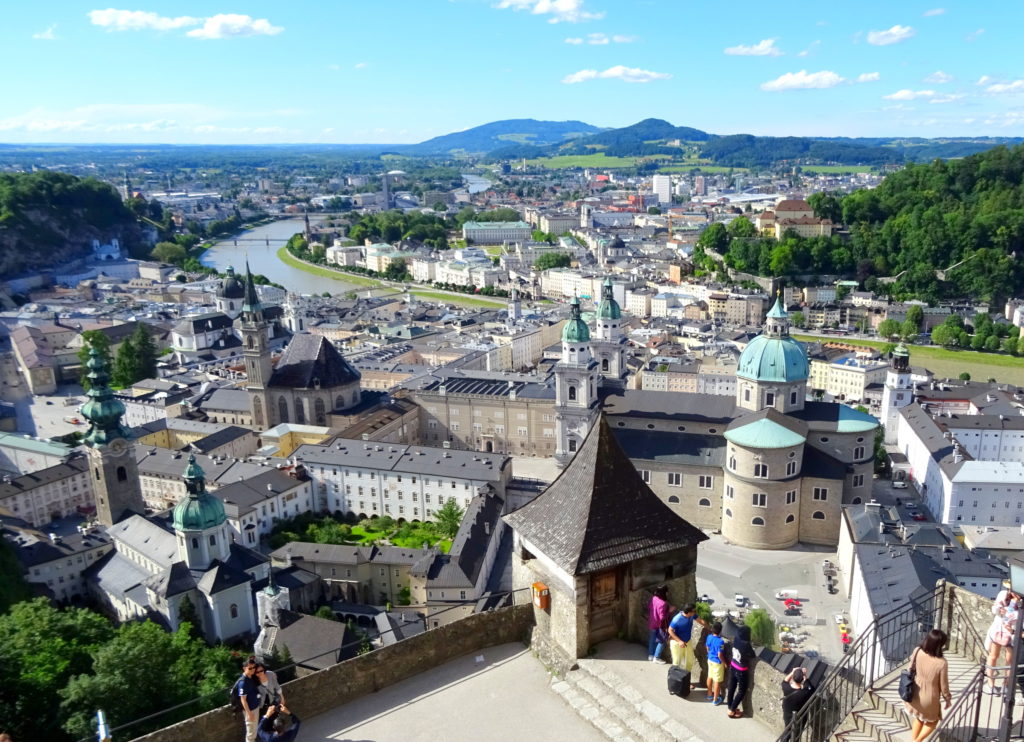 View of Salzburg from the Hohensalzburg Castle

This ubiquitousness is put into perspective at the Mozart Residence, one of two popular museums in the city center. Apart from all the other fascinating stories of the child prodigy who wrote his first composition before losing his baby teeth and his first opera at eleven, the final exhibition at the residence museum shows the many ways that Mozart’s portrait has been used in recent times in art and advertising. It’s the amusing finish to an expansive exhibition that includes instruments, sheet music written in his own hand, and family letters demonstrating a close relationship with his parents and sister.

A series of videos describes in detail how over the course of his 35 years, ten were spent on the road, beginning with a trip to France when Mozart was barely more than a toddler. But when he was not in European capitals showing off his precocious skills as a pianist and composer, Mozart spent his first 17 years in the 3rd floor apartment on Getreidegasse, in the old part of Salzburg. 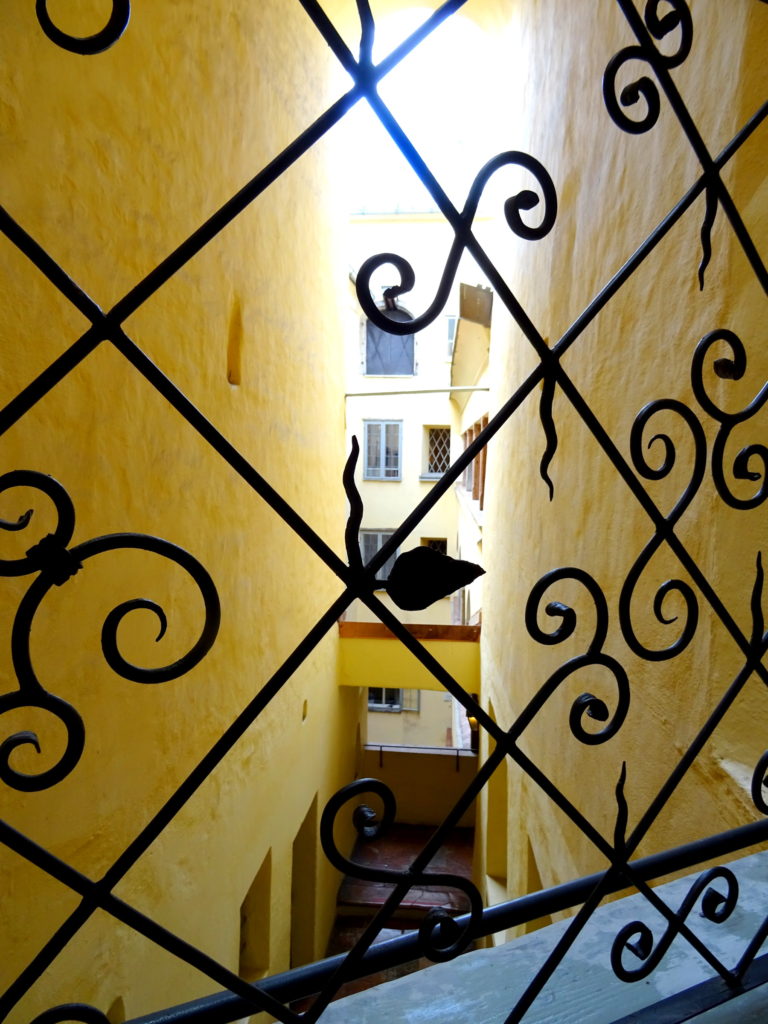 View out the window of the Mozart apartment on Getreidegasse

Smaller, and more intimate than the residence, the Mozart Birthplace allows visitors to see what home life was like in the mid-1800s. An app for additional commentary can be downloaded using the museum’s free wifi.

A warning about crowds; because this is the actual apartment of the Mozart family, passageways are narrow and rooms get crowded with the estimated 1,100 people who will pass through each day. My advice is arrive early.

Salzburg is the second most popular city for tourists in Austria. Mozart –long dead and having left Salzburg for the bright lights of Vienna even longer ago, is still its most popular ambassador. And that is why the Mozart monument that adorns the eponymous square in Salzburg old town shows a handsome, well-built, manly figure far removed from his real-life appearance. 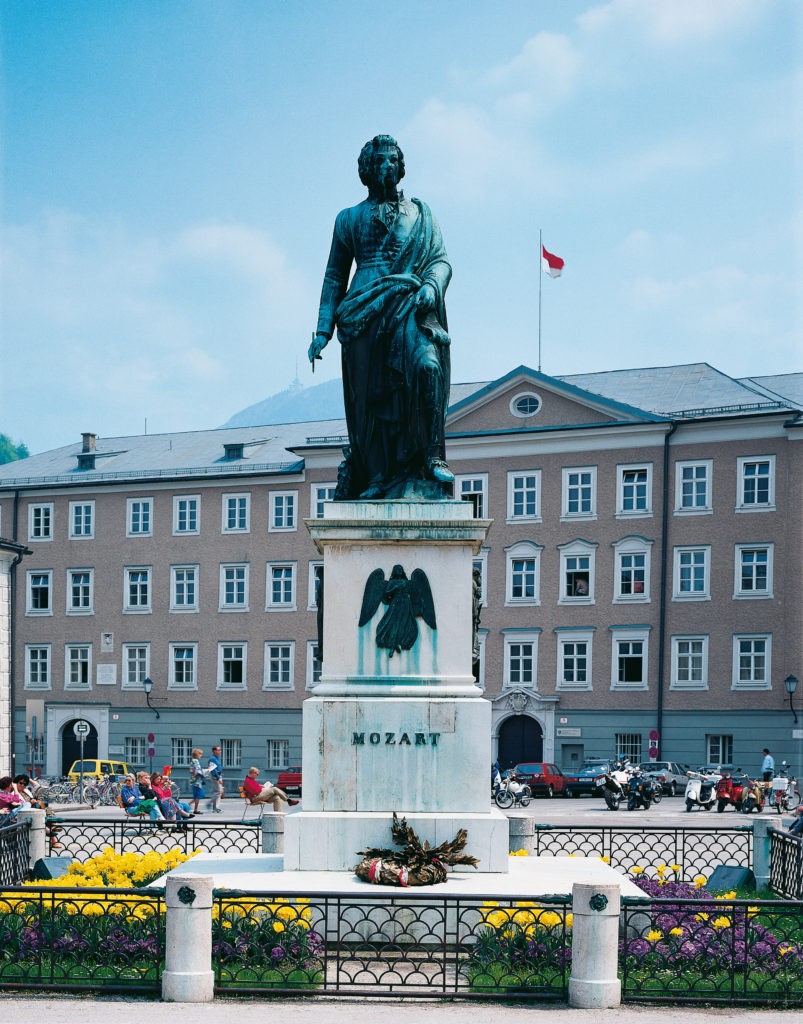 He was just 150 centimeters, short, nothing like that,” Helmut Ebergassner my guide told me on a walk through the plaza en route to my first glimpse of the streets where Mozart walked.

As Ebergassner makes clear, how well the sculpture represents the actual man is no more relevant than the foil wrapper is to the candy. Inside is where you find the sweet notes.

What emerged from the unattractive head of a frail Austrian was strong, beautiful and powerful enough to transcend the centuries so that even people who know little about him still thrill to his magical music around the world and especially in Salzburg, the city that will always claim him. 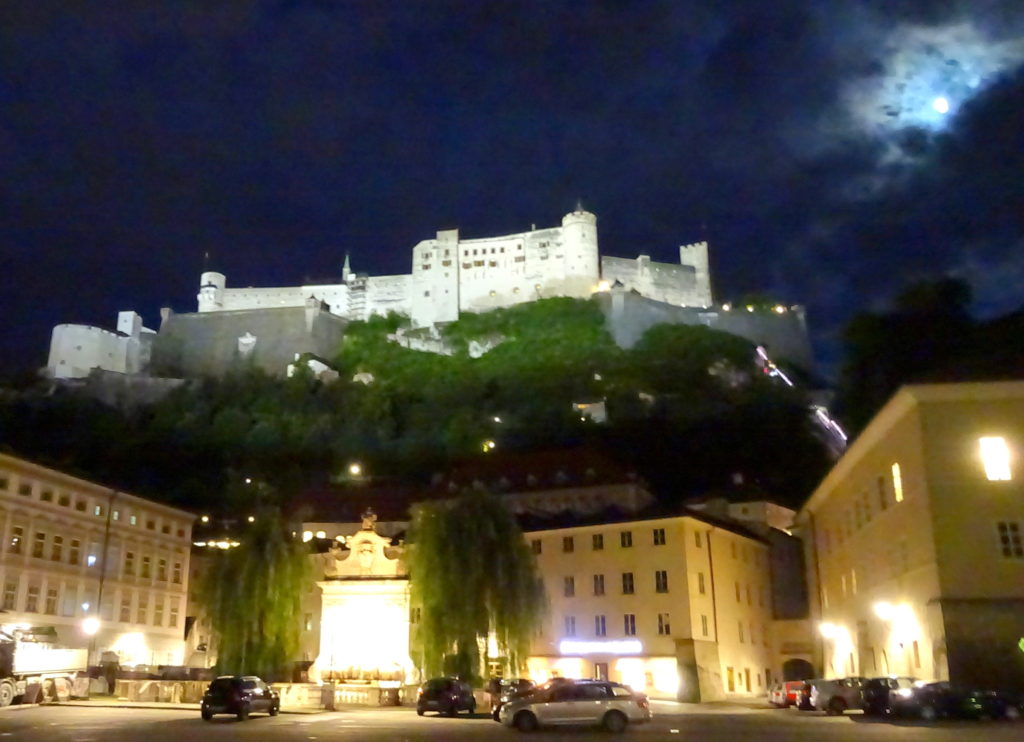 Hohensalzburg Castle after the concert