Nagasaki Survivor and US President On Same Page for Peace

Nagasaki survivor Takeo Aizawa, a retired school teacher now living in Tokyo, did not watch President Obama’s speech at the Hiroshima Peace Memorial live, as many other Japanese did. At 77, Aizawa keeps the schedule of a much younger man. He was handling other events in his life, his new grandbaby for one, and planned reunion of old classmates.

But he remembers better than most, the events that brought Obama to Japan a few days ago, because Takeo Aizawa lived through them.

Aizawa was a six-year-old student attending class when the bomb dropped on Nagasaki, 30 kilometers from where he sat.  “I was not affected seriously,” he told me, “that’s why I survived and now I can talk to you.” But he and his friends ran back to their homes as sirens wailed and people screamed. The Aizawa family sat out the attack in a homemade bomb shelter. He remembers how many people were killed or seriously injured on August 6, 1945. “It was a terrible scene every day,” he told me. 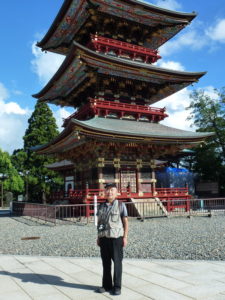 I have known Takeo since 2010, when I interviewed him for a story about Goodwill Guides, a corps of multilingual Japanese who volunteer to assist as guides to people visiting their country. A former English teacher with a curiosity about many things, Takeo is well-suited to this post-retirement activity. And over the years, he has also helped me on other stories and as a researcher for my soon-to-be-published book.

Last summer Takeo and his brother Michihiko visited me in Connecticut, meeting my neighbors, attending a service at my church and through the generosity of my friend David Paqua, taking their first-ever flight in a small airplane. 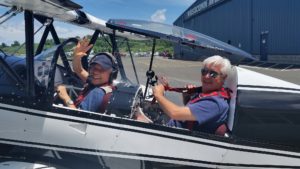 Takeo and David Paqua go for a flight

I did not learn for a few years that Takeo and Michihiko were Nagasaki survivors. But when Takeo told me it was in a most surprising context. It was to explain how – in a very attenuated way – the two of us were able to become friends.

After the bombs, American soldiers provided food that kept his family alive. This act of kindness inspired the boy to learn to English. And as a man that skill gave Takeo the opportunity to see the world from a broader perspective.

Over the years, Takeo has spent time guiding people from 28 different countries. Each encounter has changed him in some way. “I now know that people of the whole world are the same, they have common feelings and share the same compassion, kindness and weaknesses.”

During his speech on May 27, President Obama alluded to the same conflict, what the president called “humanity’s core contradiction.”

“Many speeches have been made so far,” said Takeo, who is more attuned to the subject than most, but Obama’s address and its honest appraisal of human nature “is one of the greatest,” Takeo said.

“This gives me the impression that we should have some means of getting to know each other more directly,” Takeo suggested. “Then we have more peace and resolve prejudice against different people.”

The legacy of soldiers is not always and only destruction, as evidenced by those who so dramatically influenced the life of a boy in war torn Japan. On a Memorial Day when in America when prejudice and fear seem poised to eclipse tolerance, the words of an outgoing president and a Nagasaki survivor ought to carry a special heft.