This Memorial day the family went to the Corsairs over

Connecticut Wheels and Wings show at the Sikorsky Memorial Airport in Stratford. We had my mother-in-law, Mary Schembari, along because when she was teenager, she worked at the Chance Vought factory which produced the Corsair for the Navy during World War II. The single engine, gull wing airplane took its first flight 70 years ago and without stretching the point, I can tell you – that event happened in concert with a time in the life of my mother-in-law when she herself had wings. 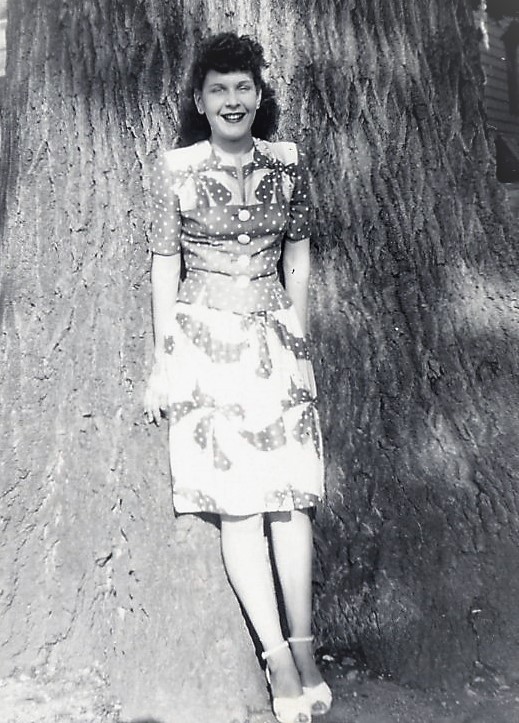 In 1943, Mary was a brown-haired pixie of a girl, five foot two and barely 100 pounds. She had moved from Sunbury, Pennsylvania to Connecticut after completing high school. She was just 17 and like thousands of other young American women at the time, she’d been trained in an industrial skill so she could help in the war effort.

She was hired at the Corsair factory in Stratford, which even today is still across the street from the airport. When the bosses learned she could weld, she was given the Navy welder’s exam and put to work for $1.25 an hour.

So imagine, if you will, young Mary, dressed in overalls and saddle shoes on her way to work where she will gather her toolbox, don a mask and gloves and build airplanes. Imagine this because – as if time had stood still – that’s the girl who stood on a sunny tarmac on Sunday, watching those airplanes take to the sky.

“I had tears in my eyes,” she told me later that afternoon, “just to think of them still flying.”

Len Roberto, a member of the Airdales and a volunteer at the airshow, says there are 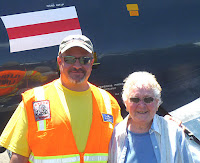 only 25 or so Corsairs still airworthy. So to have five of them in one place, all dolled up in shiny paint and polished aluminum is a tribute to the plane’s unique relationship with Connecticut and the people who live here.

“This is one of the few planes where the whole thing was designed and built in one state,” he told me later. “Anytime you talk about World War II airplanes, the Corsair is always going to be in the top. There’s no way you can mistake this plane for anything else other than a Corsair.”

Now a number of high profile flying machines have emerged from the tiny state of Connecticut, including the S-42 Flying Boat which was operated by Pan American World Airways and Sikorsky’s Black Hawk and Sky Crane helicopters. But when it comes to the Corsair the confluence of design, technology and national purpose distinguishes this airplane. You could see that reflected on the faces of the crowd at this weekend’s show.

For Mary, the plane is evocative of a time when her life was full of promise. She was “footloose and fancy free” she told me, a cutie pie among cutie pies, who worked hard by day and attended dances with visiting servicemen on Saturday nights. She would marry a sailor, Jimmy, and enjoy a half-century of wedded bliss, but that was in the future. In the early 1940s, she was living in a boarding house with young women from around the country and enjoying it all.

“We had the foreman who would come around and check our work and say, ‘That’s a good weld Mary.’ Or ‘You know that wasn’t so great,’” she told me. “They kept after you to improve, to stop the fooling around and concentrate on what we were doing. There was a lot of flirting going on in the factory.” 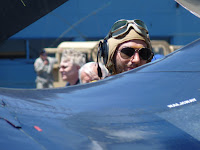 I couldn’t help thinking about that this weekend when Christopher Soltis, a World War II re-enactor in full 40’s era flight gear, approached and started chatting up Mary. Christopher was certainly as adorable as Mary was in her prime and he appeared thrilled to meet someone who worked on the Corsair factory floor.

As the afternoon went on the Corsairs on display cranked up their engines and flew formations. Mary found herself affected in a way she had not anticipated by her role in the history of this airplane.

“It was an assembly line where you could see this thing being made. From the in-door to the out-door this plane is coming down and people are working on it. I didn’t have enough sense to look at it and realize what I was doing. I didn’t appreciate what I did until I stood there on Sunday. I got choked up and I thought, ‘My God, this is what I did.’” 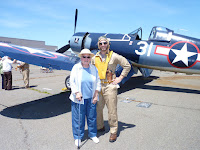 4 responses to “New Thoughts about Old Planes on Memorial Day”