To the delight of many, the White Storks have returned to Puerto de la Santa Maria and few are happier about it than Francisco Prainz.

I saw the birds and met the man who is documenting their annual fair weather residence here while riding my bike on a sunny afternoon. A dozen of the storks were clucking loudly and stomping around their enormous nests atop the city’s 15th Century Priory Church and I joined several others who were gawking at them.

White Storks, I have learned, have quite a big fan base according to the Max Planck Institute for Ornithology.

“In Europe it brings newborns, in Mesopotamia it marks the beginning of the pilgrimage to Mecca, and it often brings good luck or is even seen as holy bird.”

To Francisco Prainz, a former graffiti artist turned muralist, the storks brought not babies but the inspiration for his latest project, a large two-sided mural on the city’s fancy and appropriately named-Palacios Street.

You need to know that Puerto de la Santa Maria is gorgeous city but it is also a work in progress. A number of historic buildings are in disrepair and awaiting renewal. And the narrow streets are dotted with empty lots. The government hired Prainz to beautify one of those lots by painting the cinder block fronting the corner of Palicios and Calle Virgen de los Milagros.

It is a decision the residents seem to appreciate. Passersby constantly interrupt Prainz to ask questions, make comments or snap photos. (I’m guilty on all three.)

During our conversation, Prainz explained he’s fond of wildlife and so he chose the annual visit of the storks as the theme for his mural. 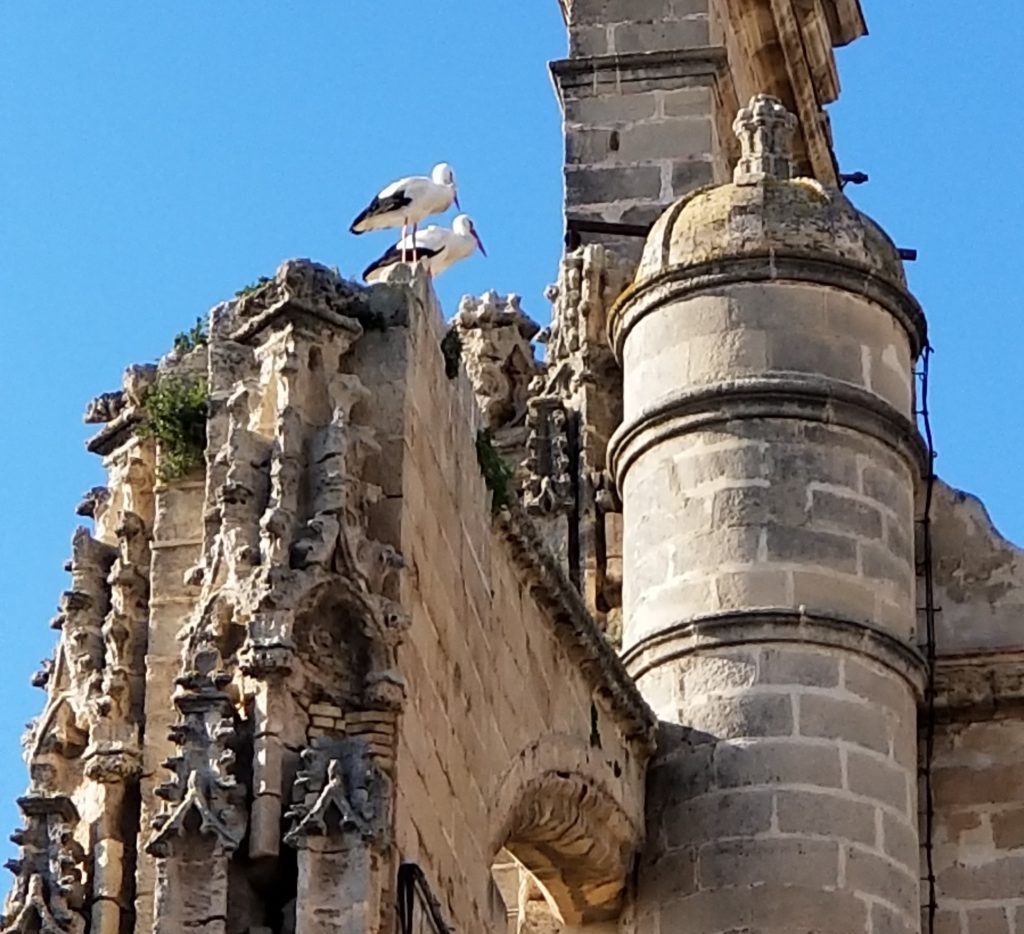 “The birds travel from one place to another,” he told me. “They’re like us. We want to travel too.”

Take a look at some of Prainz’s other projects on his Instagram feed and you’ll see how he uses nature to provocative effect even when painting people.

“I always like to paint themes related to nature or use nature to characterize people or places,” he told me.

Prainz consults a drawing of a stork as he works. It is hard for me to see how he gets the subtle shading and blend of colors with such a crude instrument as a can of spray paint. Prainz tells me his years of street art (AKA graffiti) starting in 1999, provided invaluable training. I can tell he’s right from the completed sections that are rich with detail and feeling. 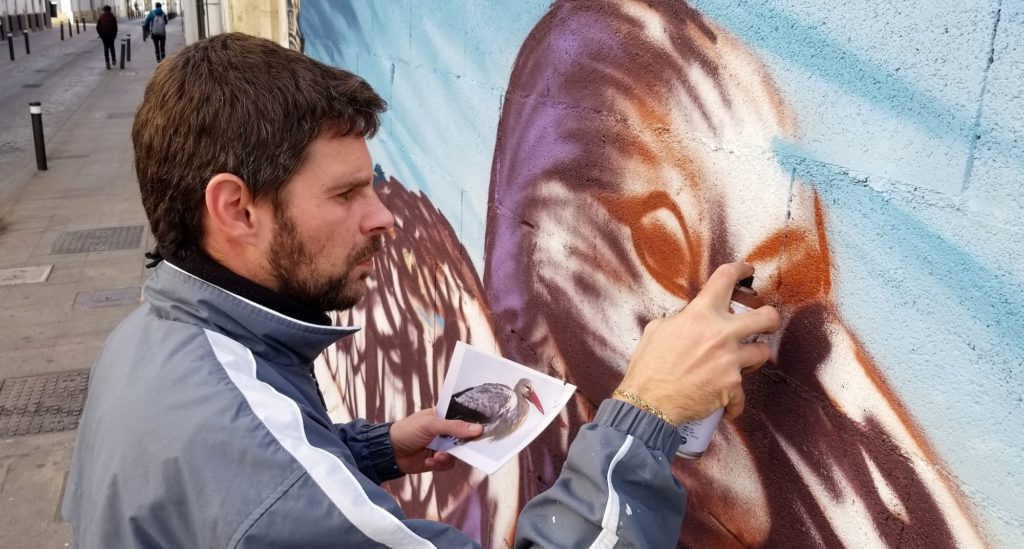 The White Storks come to Spain (and other places in Europe) in February. At the time of my visit, the migration was in full swing. Prainz had counted two dozen nesting pairs on the turrets of the church but they’re not confined to that one spot. Once I saw my first, I noticed them all over town. All I had to do was look up. 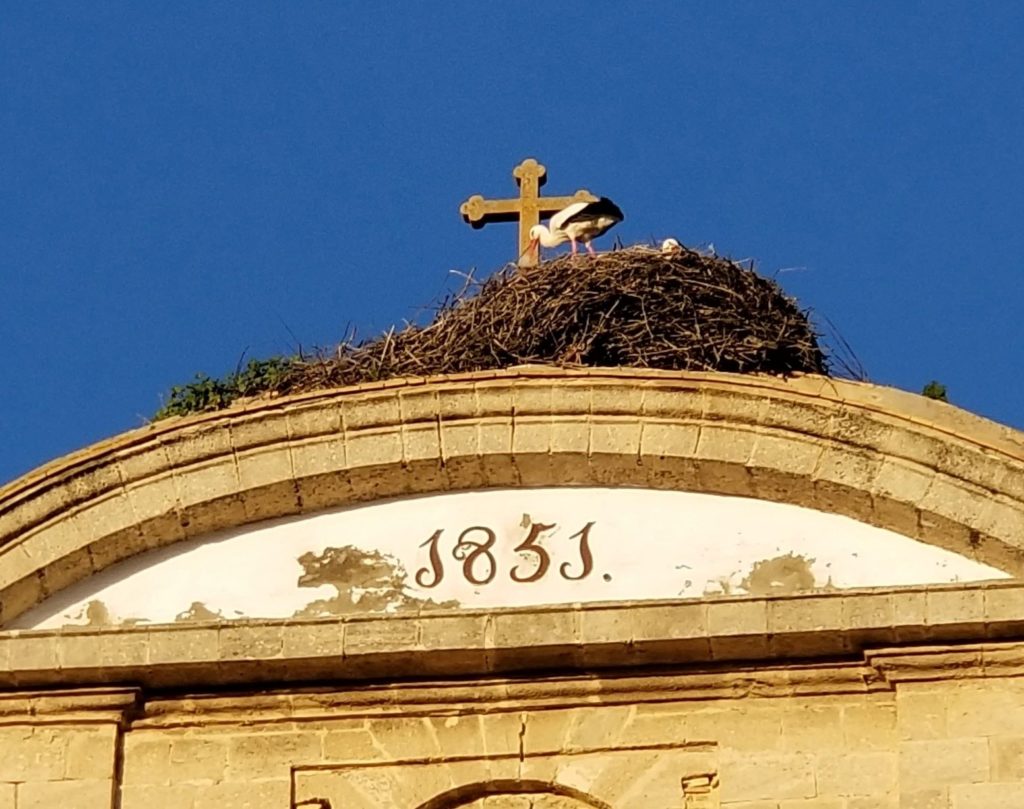 Puerto de la Santa Maria is wedged between two ecological areas; the Bay of Cadiz Natural Park and the three seasonal lagoons that make up the Complejo Endorreico de El Puerto de Santa Maria. Both host migrating birds. In addition to the storks, there are flamingos and other salt-marsh loving water birds.

The White Storks will stick around until the fall when they make their flight back to sub-Saharan Africa for the winter. The same may be true for Prainz. Having completed murals in Colombia, the Canary Islands, Mexico and Panama, he will migrate to his next commission like the birds who inspire him. And just as the storks do, he makes each place he visits a more interesting and beautiful place. 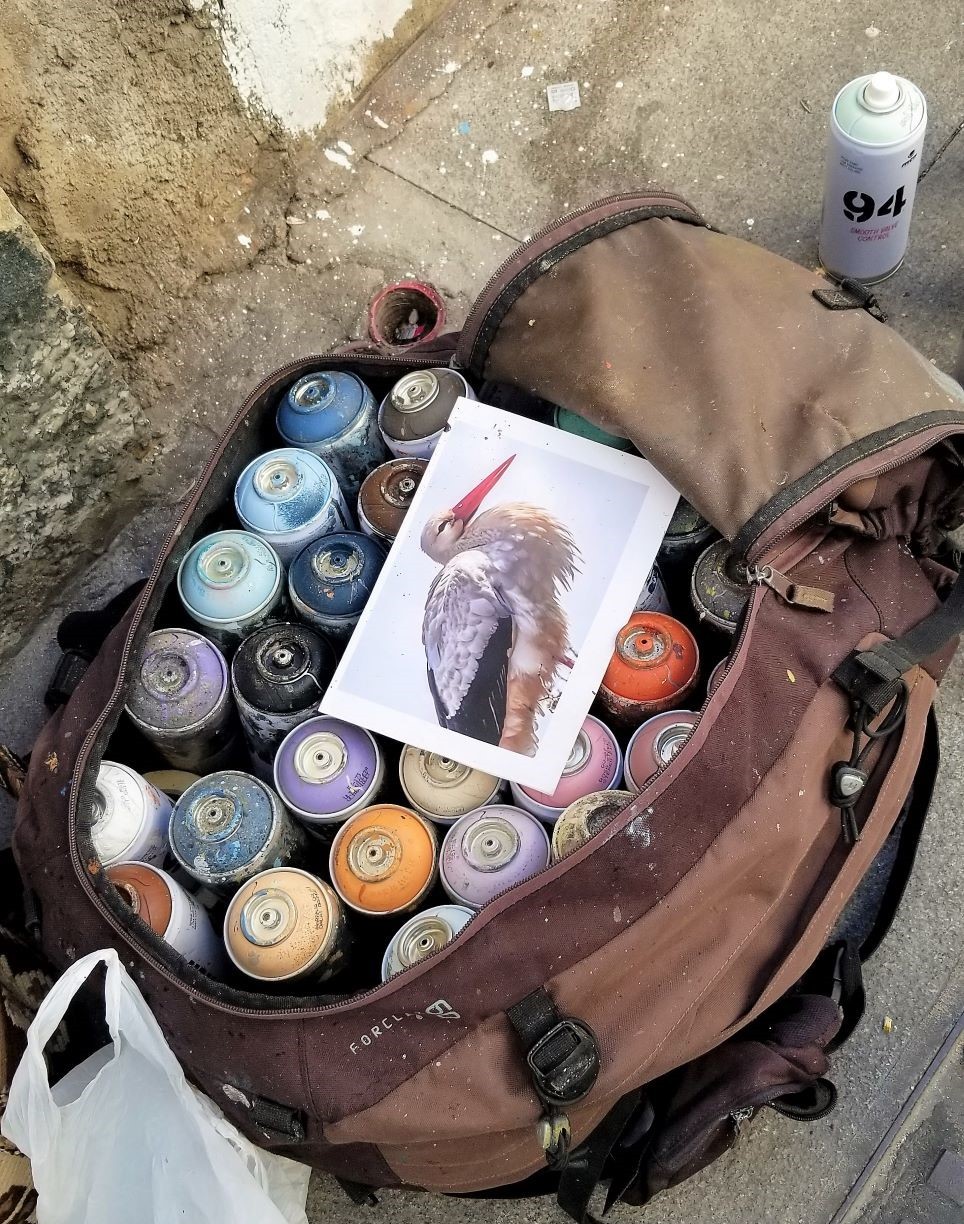 Categories: Africa, Europe, Go How Know How, Travel by Air

One response to “Painter of Storks Delivers Message of Migration”