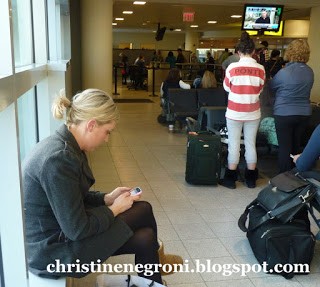 Too often air travel is an antiseptic experience for the passenger as we sit in
tile-floored, waiting rooms, our heads down and our minds in cyberspace. It is so rare and so thrilling to actually smell the jet fuel
and hear the whine of the engines at the few airports that still encourage a love of
the journey. Amsterdam’s Schiphol Airport is one of them and it’s the perfect place to reflect on commercial aviation’s first century since KLM Royal Dutch is, at 96 years old, the oldest airline still in operation under its original name. (And what a nice name it is.)

Schiphol Airport embraces everything having to do with airplanes. In the shopping mall/food court/check in area called Schiphol Plaza, a widebody jet engine and landing gear are on display next to the airplane-themed gift shop which yields valuable retail space to an airplane cabin turned theater. Inside, comfortably relaxed on those wider original airplane seats, one can watch the historic footage of airplanes and pioneering aviators without spending a cent. 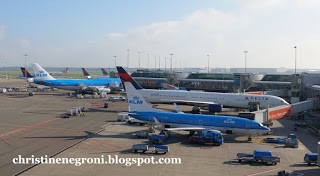 We start with the Wright brothers and Louis Bleroit and within minutes we are treated to the arrival of the A380 and the Dreamliner. This film is perfect preamble to a wander up and out onto the Panorama deck overlooking the gates where the world’s jetliners await their next
departure.

Dozens of spectators were there on Saturday morning; local families, travelers and
notably a big crowd of Dutch plane spotters armed with with binoculars, cameras,
notebooks and the Dutch Scramble, a listing of the global airline fleet by
registration number. Uh huh, they got it bad. 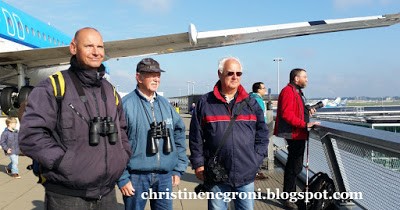 >From left, Kruijt, Smith and Goebel at Schiphol Airport

I chatted up Ben Smith and Willem Goebel, both retired and Pascal Kruijt, who must fit his passion into a life that still includes regular employment in horticulture. I’m not sure how he does it, considering he has traveled from Australia to the U.S.A. stalking tail numbers to add to his lengthy database. While in America in 1998, on a tour specifically for wing nuts, he was able to visit the tower at Chicago’s Midway.

I’m not trying to call Pascal out or anything, but when I asked him if he was at Schiphol on Friday  – presumably a work day – when Finnair’s new Airbus A350 arrived on a post-delivery flight, he grinned and affirmed that he was there. 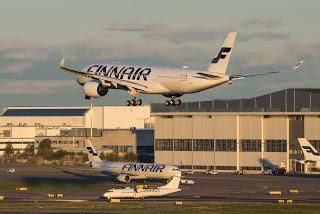 >Finnair’s new A350 lands in Helsinki Photo by Antti Lehto

“It was beautiful, it was special,” he told me filling me in on the details, since I arrived in Holland too late to see it myself.

“It was special flight, it arrived in Helsinki last Wednesday
and the first flight was to here.” Unfortunately, Amsterdam won’t see Finnair’s newest jumbo often, the airplane is scheduled to begin flying the route from Helsinki to Shanghai beginning November 21. Three more from the nineteen A350s ordered by Finnair are expected to enter service in 2015.

In with the new and out with the old, seems to be the way it plays with these three aviation aficionados. Amsterdam is one of the few remaining airports where the Boeing 747 can still be found in number and KLM has no plans to retire them anytime soon, according to spokeswoman Lisette Ebeling-Koning. But one does have to wonder how much longer they’ll fly and whether these men would shed any tears when the last Queen of the Sky departs Amsterdam. 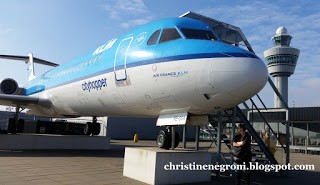 “No,” Willem Goebel said without pausing. “The new technology is much better and cheaper to use,” he said reminding me that four-engine planes are a thing of the past. “We must go smaller,” he said and Ben Smith and Pascal nodded in agreement.

Fearful of diverting their attention for too long, I left the plane spotters to their busy day while I climbed up into the KLM cityhopper airliner parked out on the observation deck and open for visitors. This was not just any airliner, either, but a Fokker 100, a Dutch-manufactured plane that was once a regular in fleets around the world, but now like many others, it is a shell of its former self, and a reminder of the ceaseless course of progress. Binoculars raised to their eyes, the plane spotters keep a watch out for the next new thing. 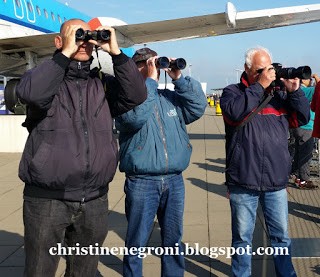 >From left, Kruijt, Smith and Goebel at Schiphol Airport