People Who Move You on the Journey 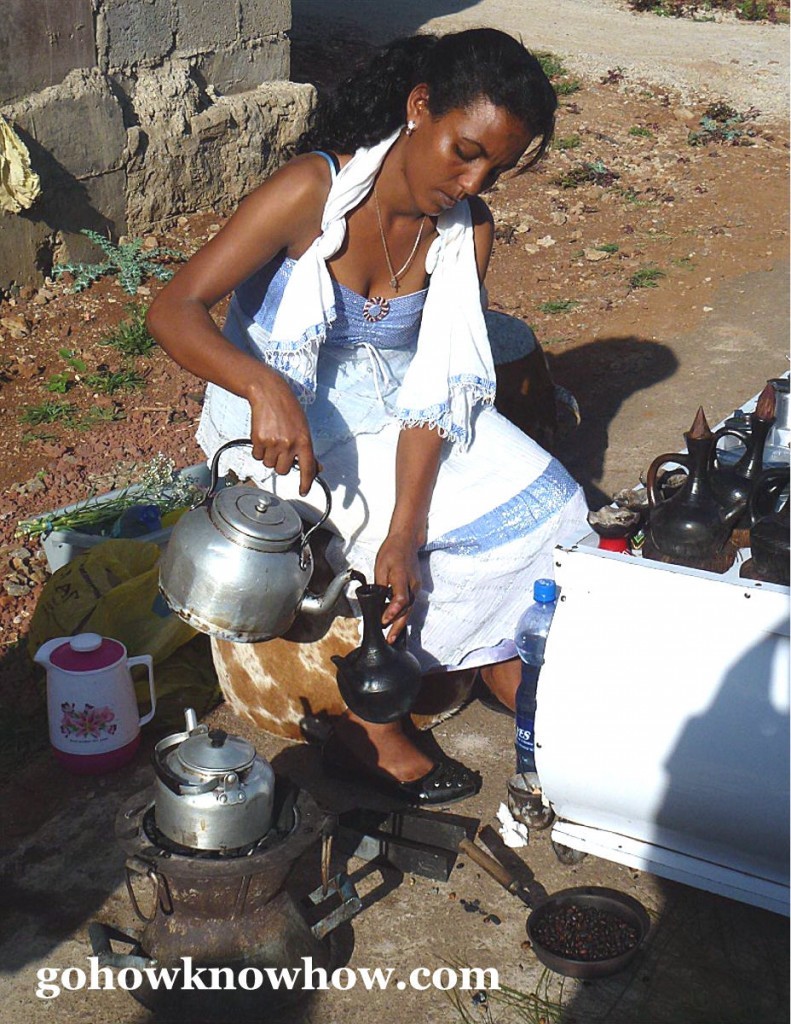 We were greeted at the airport with coffee and flowers.

Over dinner, when I asked my travel companion, the Belgian journalist, Raphael Meulders, what he enjoyed most about our day traveling in northwest Ethiopia, he hesitated about two seconds and answered, “the people”.  I know just what he means.

We had a day full of moments that made me feel as if I’d just stepped into a National Geographic special. Our bus stopped to wait while cows and goats were shooed from the street and we gaped at the monkeys in the trees, pelicans on Lake Tana and the colorful centuries-old murals at the church of Ura Kidane Mihret. 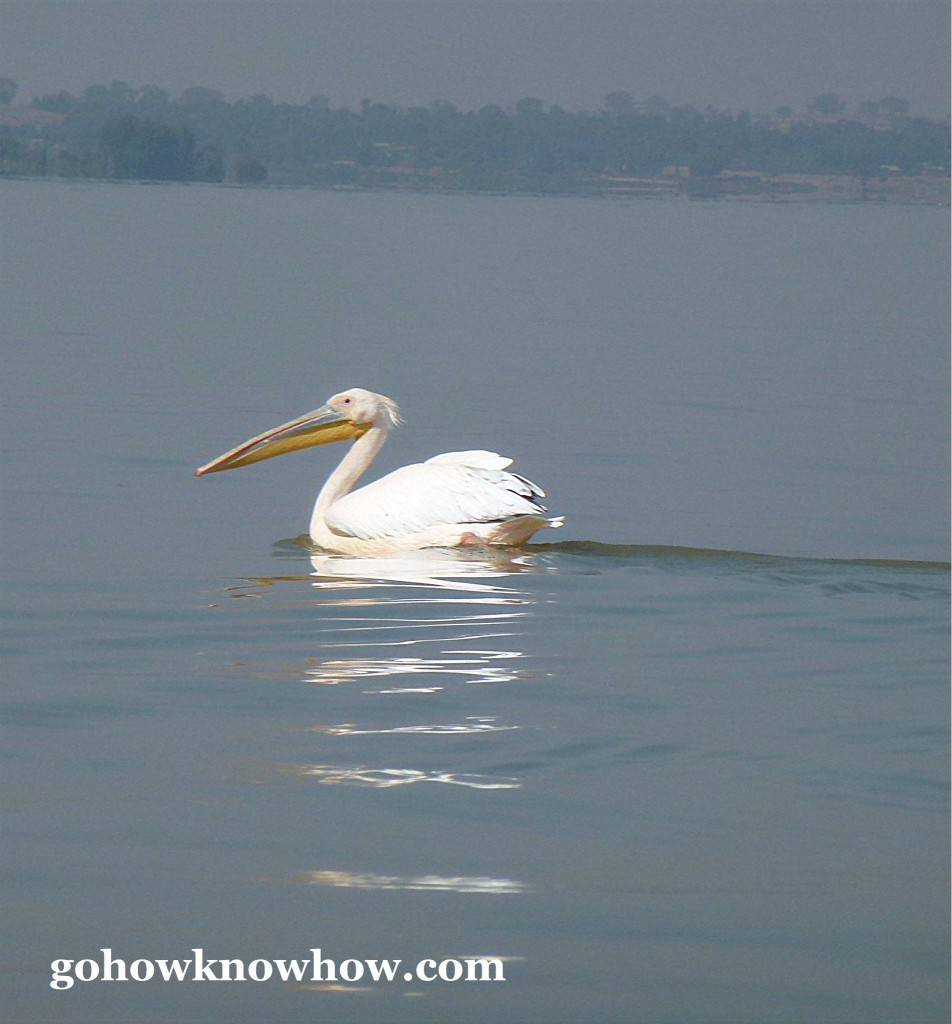 One of many pelicans we saw on Lake Tana 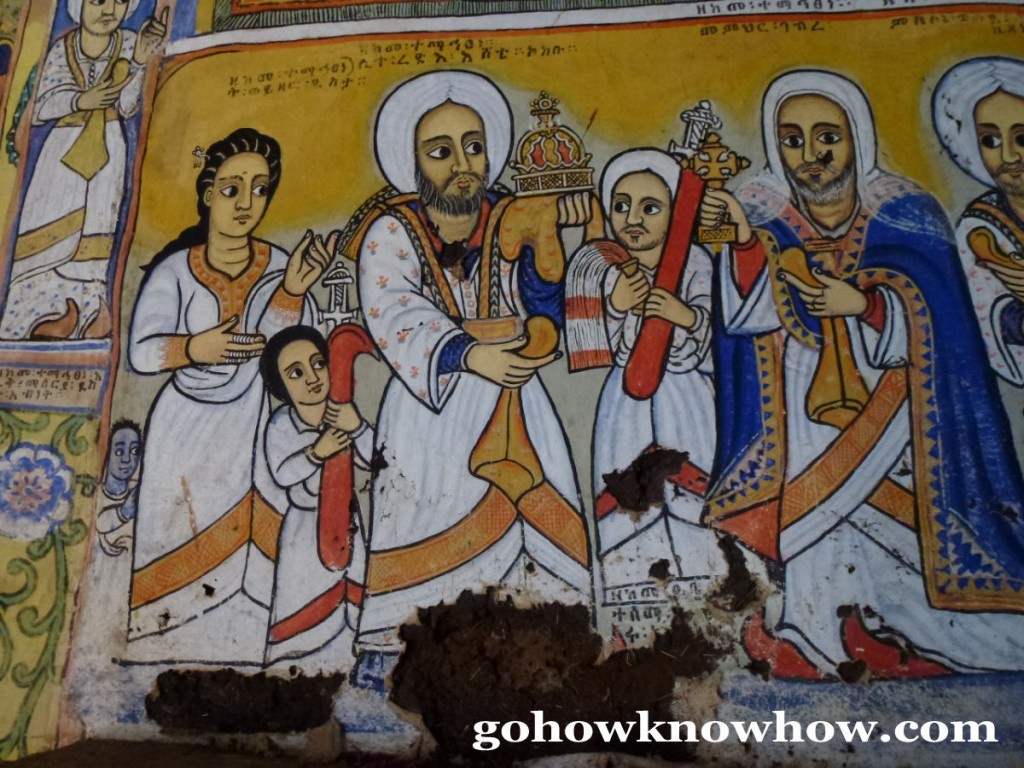 A mural at Ura Kidane Mihret shows signs of deterioration.

But it was the people we met on this day that will remain with me long after I have left Ethiopia and returned to a world where cows don’t live in the city and water comes from the tap rather than from a plastic container that has been filled in the river and carried home on someone’s head.

On the road to Blue Nile Falls.

The two beautiful women who greeted us as we got off the airplane at the airport in Bahir Dar labored for nearly an hour brewing coffee, stirring the popcorn and slicing the doughy, spongy bread that is required eating as part of the Ethiopian “coffee ceremony.” Never mind that we tourists were circling around them like caffeine addicts in need of a fix and offending local custom by digging into the bread before it was offered. They were gracious and hospitable and oh, they brewed a great cup of coffee.

Serving the tourists coffee on arrival at Bahir Dar airport.

As in many developing countries, some Ethiopians greet a busload of tourists with outstretched palms. Still others will ask for payment to pose for photos or provide guidance at points of interest. But there was no element of the commercial in many of the interactions we had with people we met along the way.

From the airport we took a bus and then a motorboat to Zegie Peninsula to see the 16th century Orthodox churches Ura Kidane Mihret and Azewa Mariam. The small spit of land is also home to several hundred people who care for the historic structures or make a living selling weavings, hammered silver charms and other tschotskes to visitors.

A quick tour of a typical home in Zegie Peninsula

It was a 15 minute walk  from the port to the churches and I couldn’t help but be curious about what was on the other end of the small side streets that veered off from the main path. On my way back to the boat, I sat for a while on an overturned reed canoe and chatted with an older woman and her granddaughter. Without my even asking, or even hinting, (really!)  she invited me to have a look around her home. It was colorful on the outside, dark and tidy on the inside and gave me the impression that most of the living goes on out-of-doors. When this is the view, why not?

Lake Tana photo by and courtesy of John Miller

After lunch we took a bone-jarring, 30 kilometer, hour-long drive to Tis Abay, to see the spectacular Blue Nile Falls. 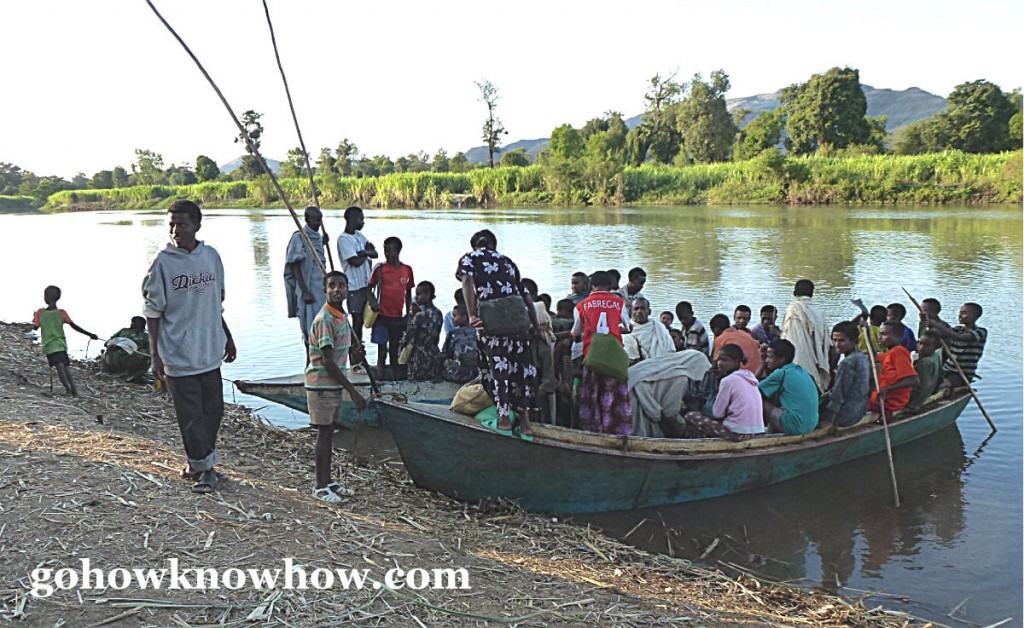 It is a short trip by public ferry across the stream.

Even after arriving, to reach the falls we had to cross a stream in small aluminum ferries and hike for about 20-minutes through an arid plateau where we passed children carefully doing their homework in neat notebooks while keeping one eye on the cows and goats in their care. 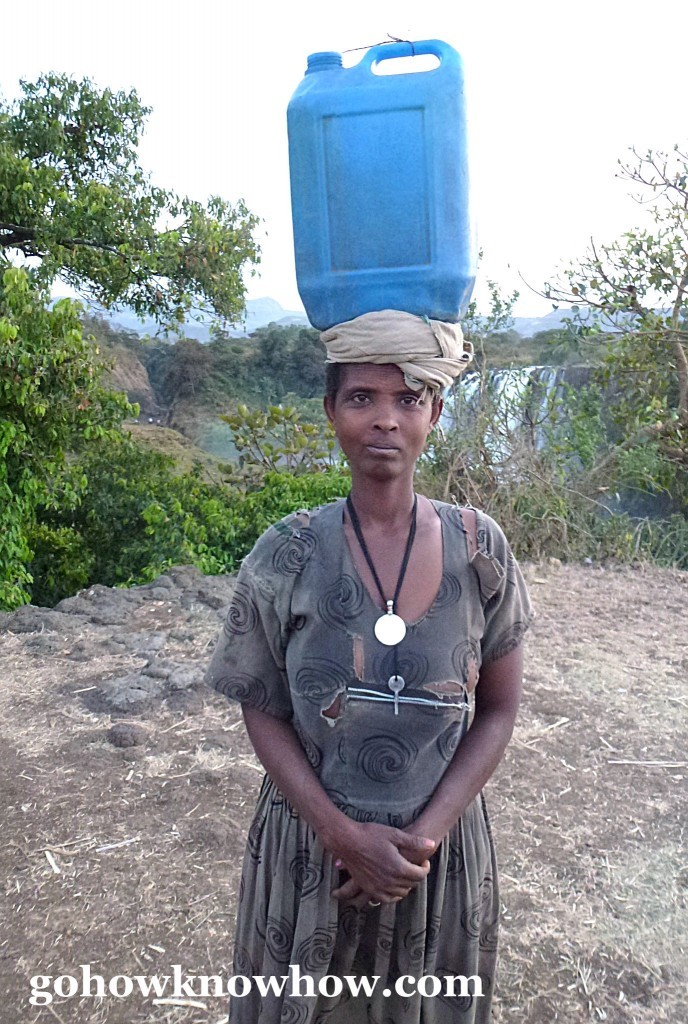 A homemaker in Tis Abay returns with water for her household.

The walk to the falls was busy with locals returning to their farms after conducting whatever business they had in town and that is where I met this woman, who was bringing water for her family but stopped for a quick hello and a very gracious offer to let me take her photo. 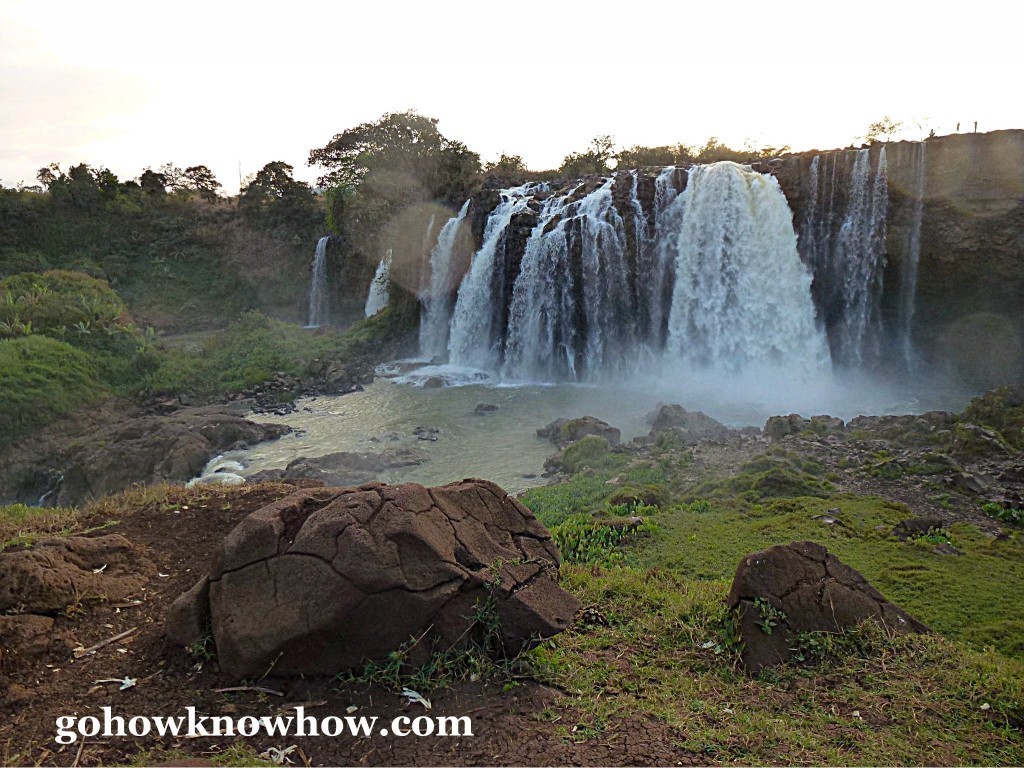 At long last, we see the falls.

That evening our group stayed in the amazing Kuriftu Resort, which is perched on the lake but also has a beautiful pool, restaurant and nightclub.

The Ethiopians are, with good reason, extremely proud of their native dancing. It is a noisy, mesmerizing affair that’s motion, rhythm and story-telling all wrapped up in one. It goes on throughout the meal, making it impossible to do anything but watch.

Lunch, dinner, doesn’t matter. The dancers are there. Photo by John Miller.

But when the last dessert has been consumed, the tour guides and the dancers make it clear everyone must get on their feet and participate.  They’re not happy until the untrained, even the uncoordinated, are shimmying around with the professionals. In all the ways people communicate across cultures and language barriers, this seemed to say, “We’re happy you’re here and we want you to be happy you’re here, too.” And indeed, we were. 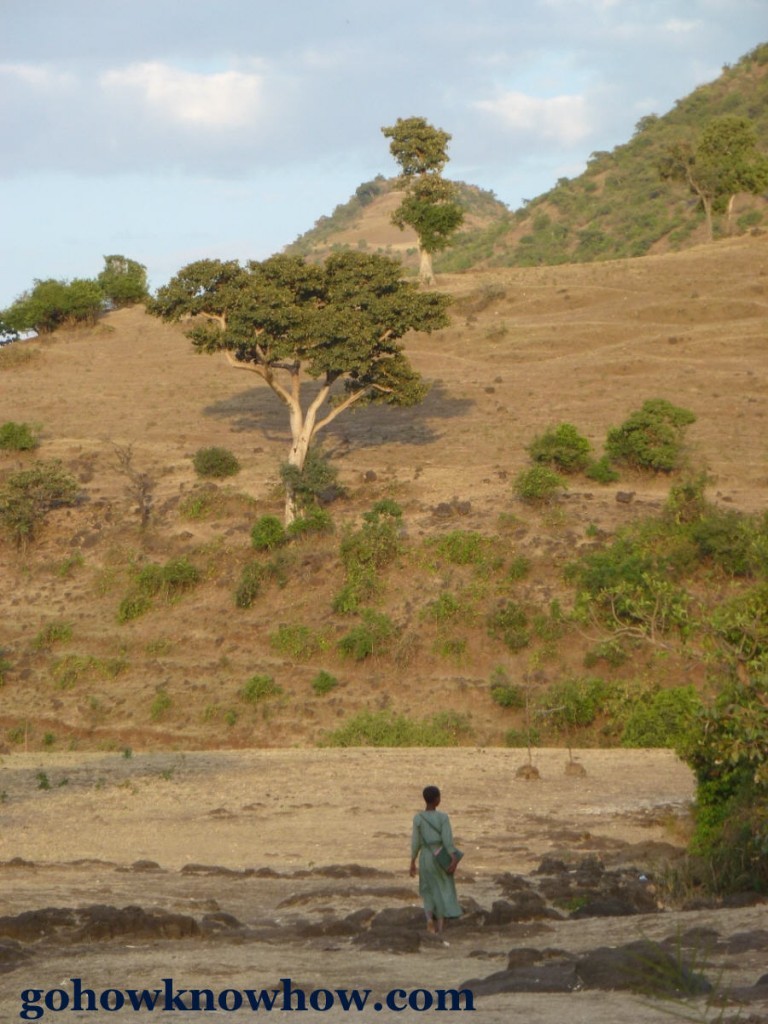 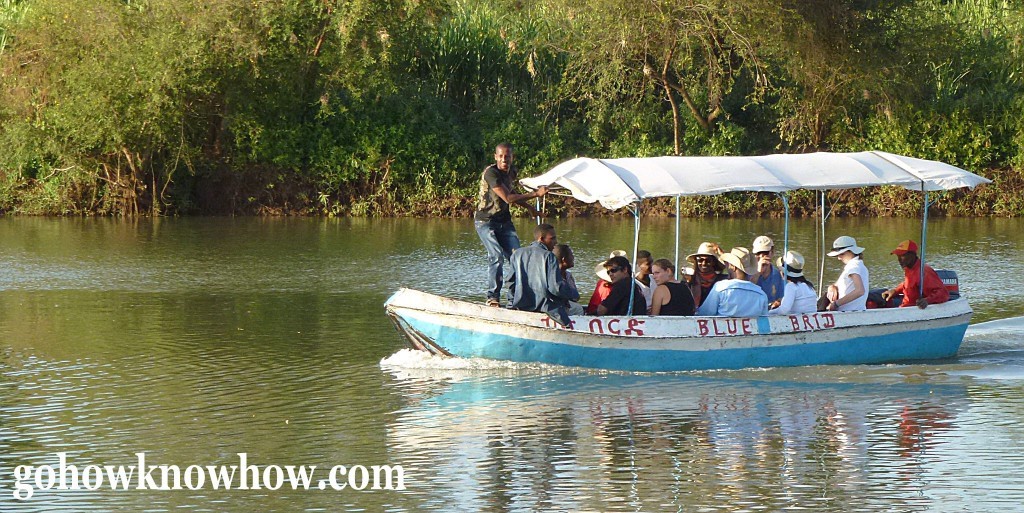 The ferry that took us across the stream.

2 responses to “People Who Move You on the Journey”