Private Jets and Physicians; A Photo Story of Generosity in Puerto Rico 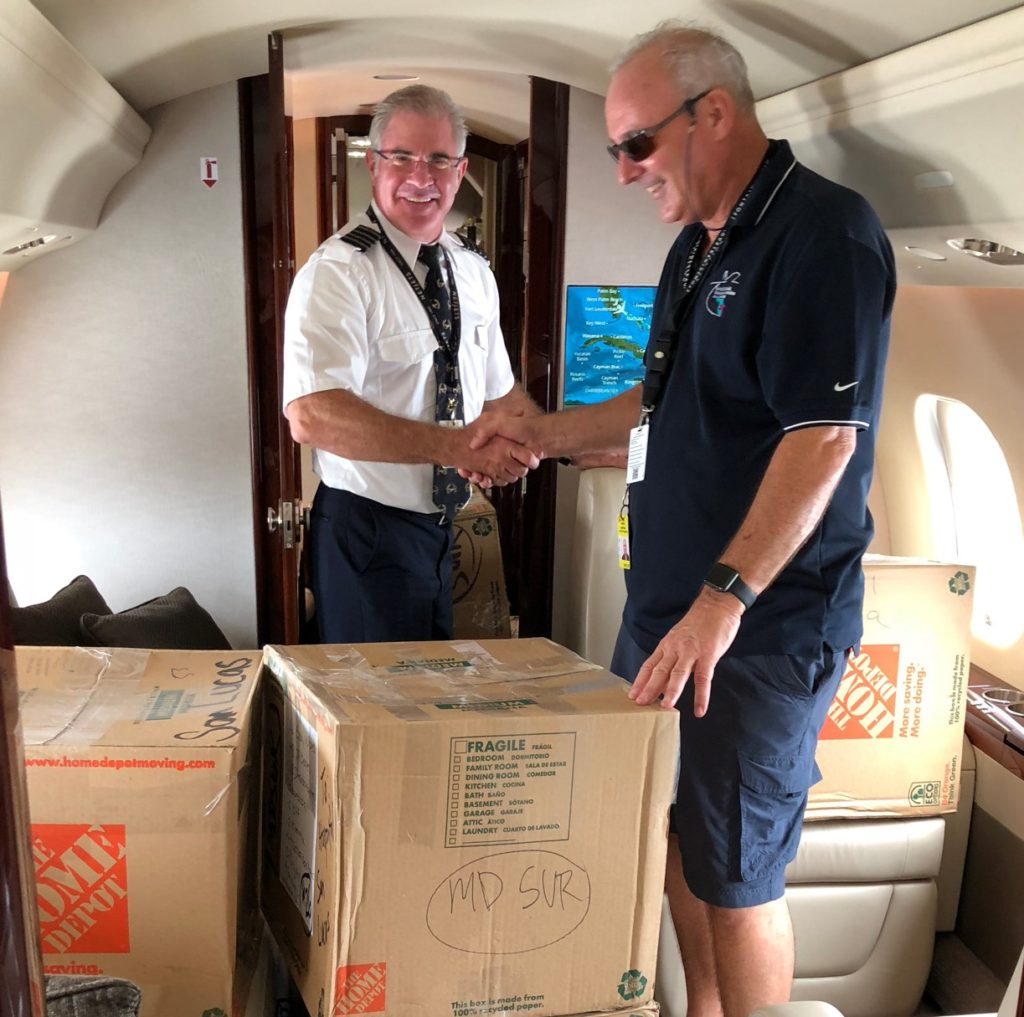 Aviation writers get a lot of press releases pitching private jets; buy ‘em, sell ‘em, rent ‘em, blah blah blah. But the best story about private jet ownership came from my Puerto Rican niece, Xamayta Negroni.  When her charitable side kicked into overtime following Hurricane Maria, it was a private jet owner who helped her deliver.

Xamayta is not one of those doctors who owns a plane, she’s not even a pilot. What she does do is help very sick children as a pediatric nephrologist in Ft. Lauderdale. 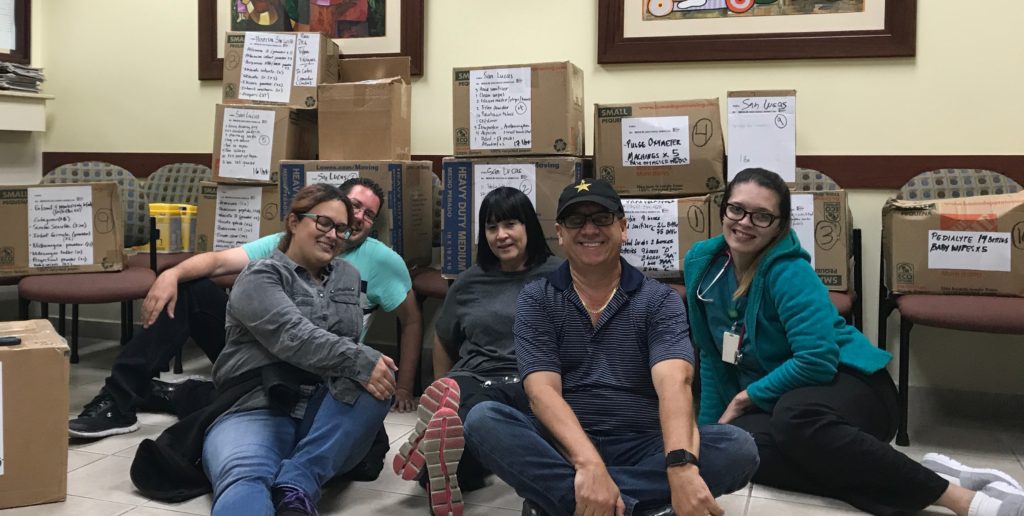 After Hurricane Maria devastated Puerto Rico, she and other physicians in a Facebook group called Doctoras Boricuas, (Puerto Rican Women Doctors) started brainstorming about how they could help. With a speed and effectiveness that surprised even them, the doctors started collecting supplies for hospitals on the island. The network of assistance quickly expanded thanks to social media.

The Facebook group connected people and hospitals with supplies to people and hospitals in Puerto Rico that were in need. The list of wants was great; over-the-counter medicines like antacids, aspirin and glucose meters, sanitary and hygienic products, baby food and supplies and the request that Xamayta will never forget; a replacement catheter for a hospital’s only pediatric dialysis machine. A child’s life depended on it, Xamayta said, because “without a catheter he can’t get dialysis.” 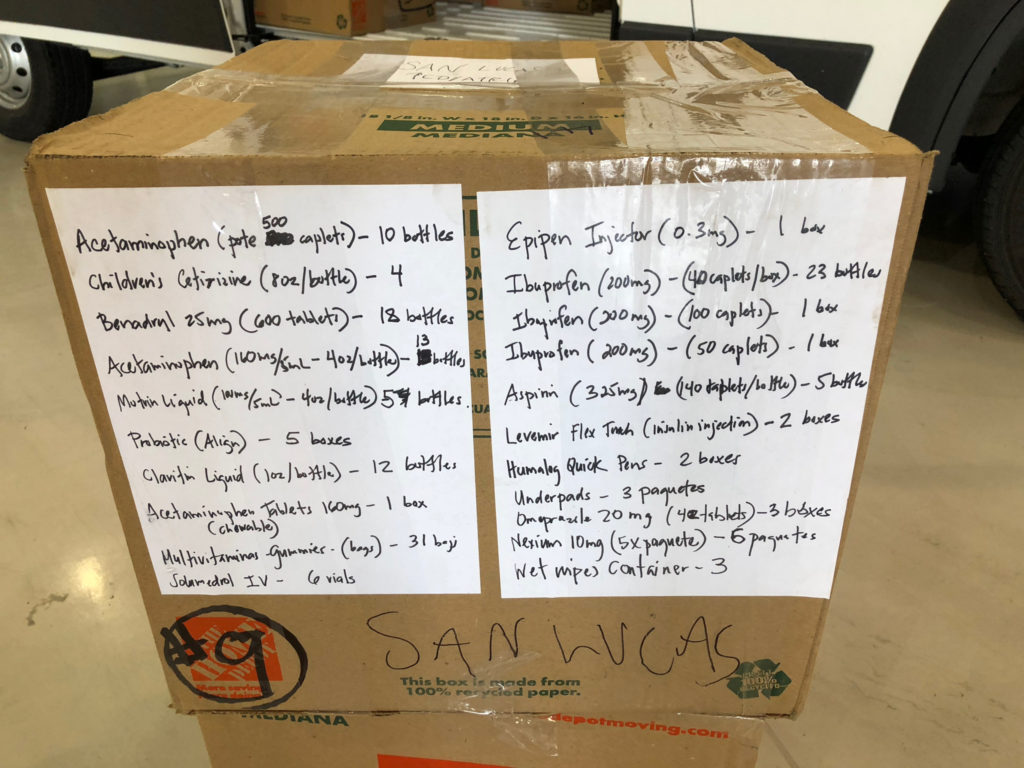 Many people contributed. Then they worked in the heat to inventory and pack everything into boxes. There was one big unknown; how would they get it all onto an island where commercial air traffic had ceased?

That is when Xamayta met David Horvitz and his daughter, Sara Corr, an internist in Colorado. 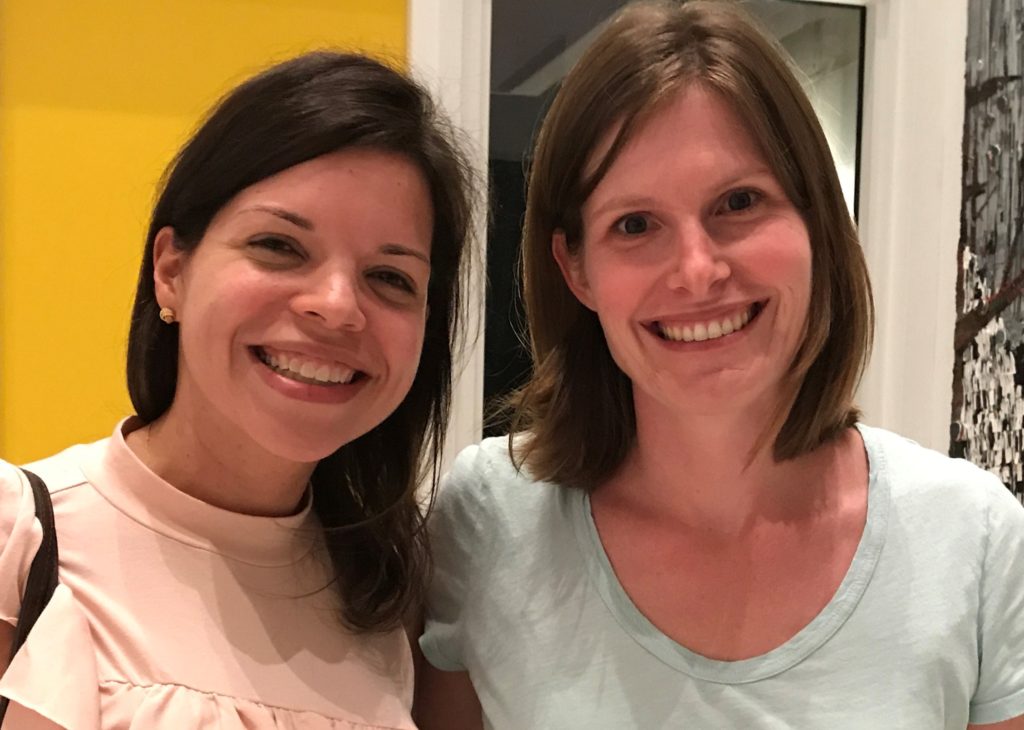 Ten days after the category 4 storm blasted through Puerto Rico, Horvitz, a private investor based in Florida, was on the golf course in Ft. Lauderdale when got a call from Sara, a member of an online doctor’s group called Dr. Mom. It was right before the whole Horvitz family was scheduled to take the private Hawker 900 jet for a holiday trip to the Dominican Republic and Sarah had “a big idea”.

Do you think we could stop in Puerto Rico on the way down and drop off the supplies?, she asked her dad. “I said yes. I was thrilled to be able to do it,” Horvitz said. 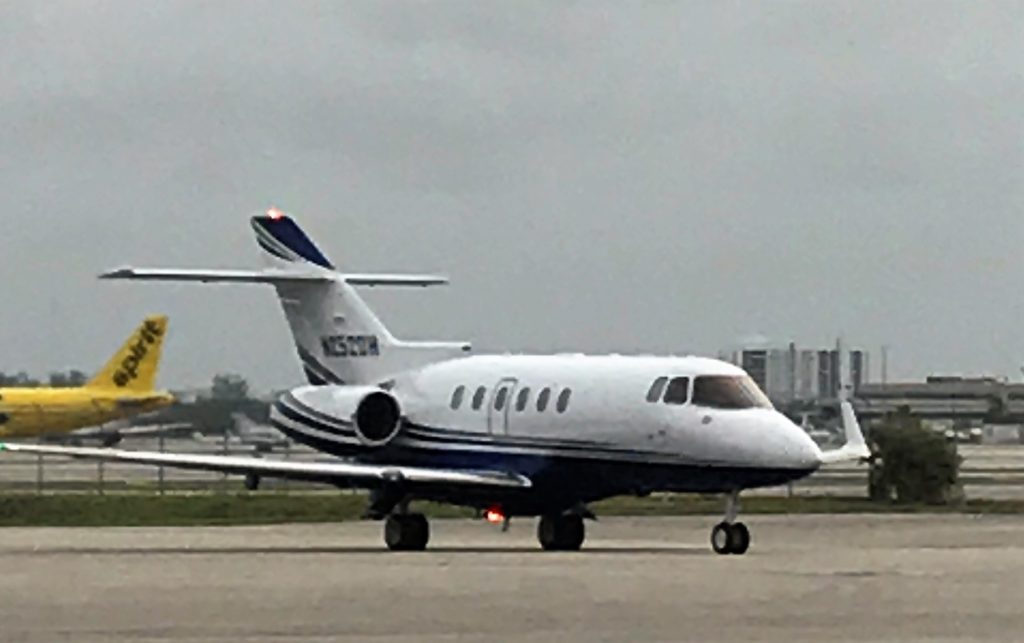 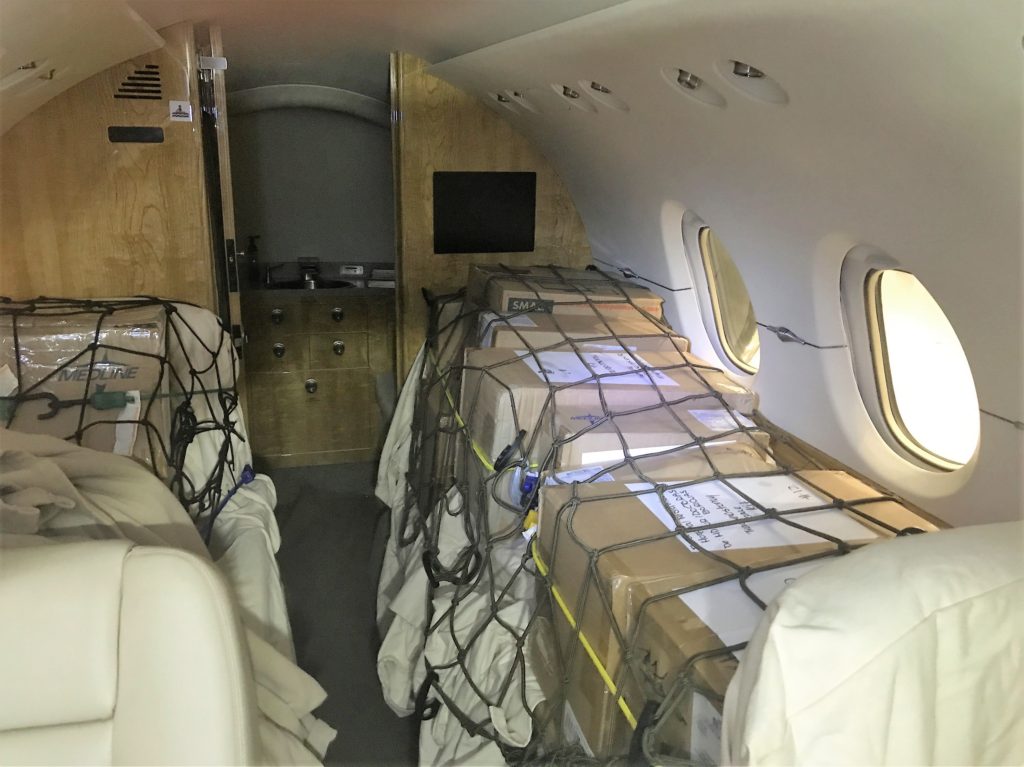 When he eyeballed the donations, however, it was clear, “My plane’s big, but its not that big.” So he loaded up the Hawker with as many boxes as it could hold and chartered a Global Express 6000 from Netjets for the family vacation.

In early October, both planes arrived at Mercedita Airport in Ponce, on the southern side of the island. There, the grocery store-owning parents of Yelliann Ruiz Irizarry, an internist in Miami, were waiting with truck to get the boxes to the hospitals. 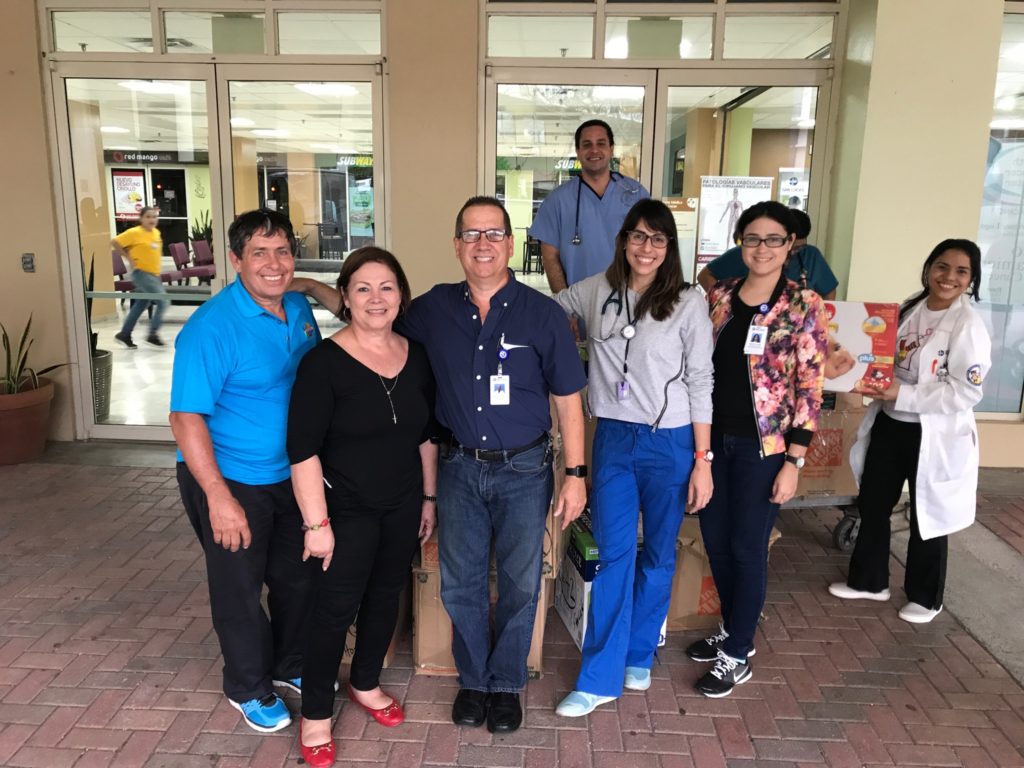 “The southern side had been pretty much neglected by the relief agencies,” Horvitz noted, so playing this role “felt great,” he said. 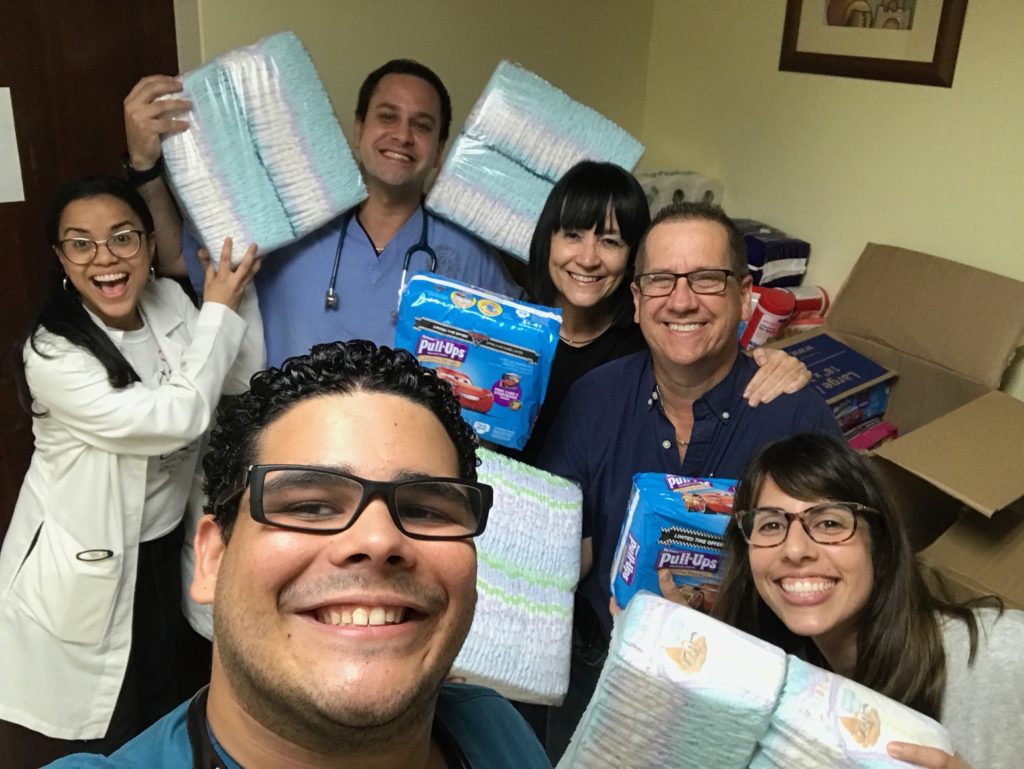 Drs Velazquez and Camacho at Hospital Episcopal San Lucas Ponce with some of the supplies they received.

With the deliveries made, it was time for the Horvitz family to start on their vacation, so their Netjet charter headed back west to the Dominican Republic. The Hawker 900, meantime was now empty though it would not be for long. Horvitz told me his pilots were now in the rescue business.

“They agreed to pick up your brother and his wife (Xamayta’s parents Rafael Negroni and Sarah Balasquide) and 4 or 5 other abuelas” (grandmothers of other doctors on the mainland) and bring them to Florida. But the plan didn’t end there. Francie Horvitz, David’s animal-loving wife arranged for 8 rescue puppies to be carried to Florida, too. 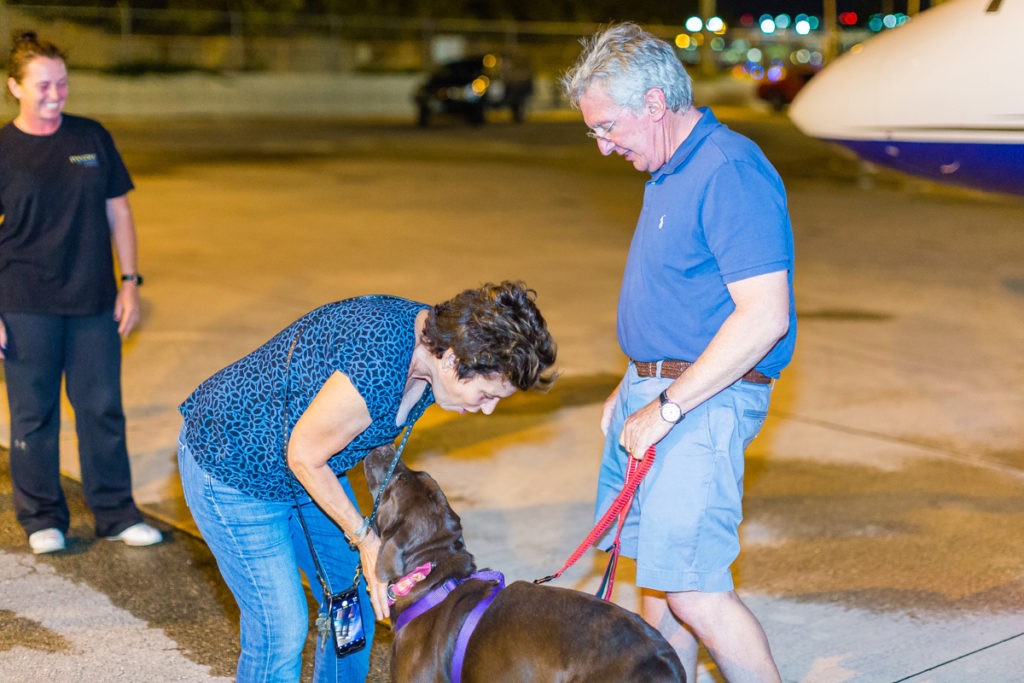 Francie and David Horvitz with a rescue dog, now in their care in Florida 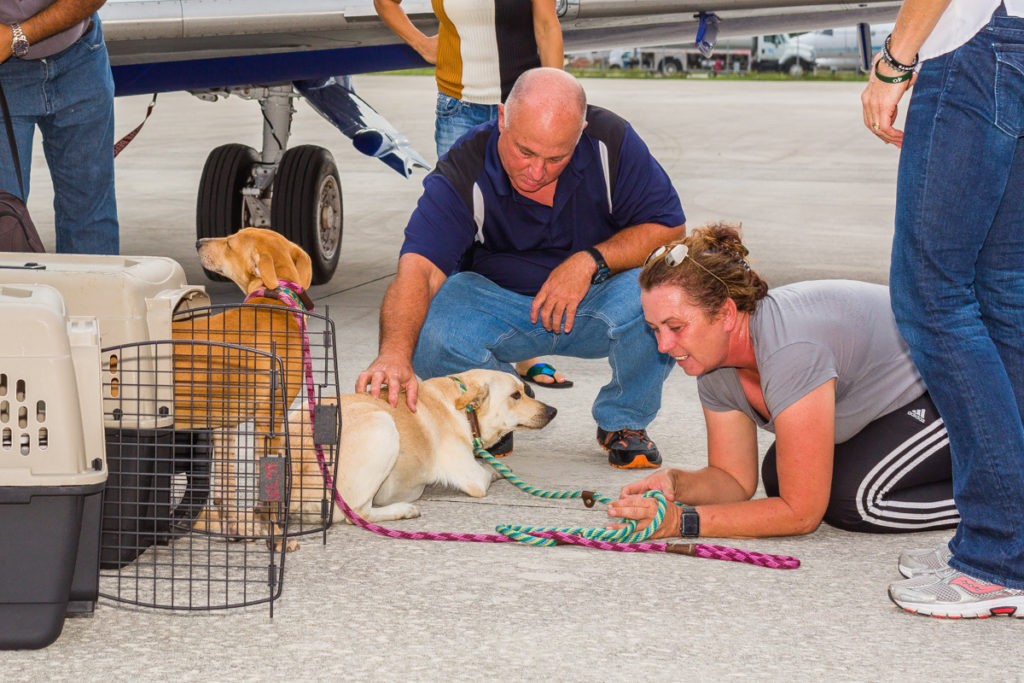 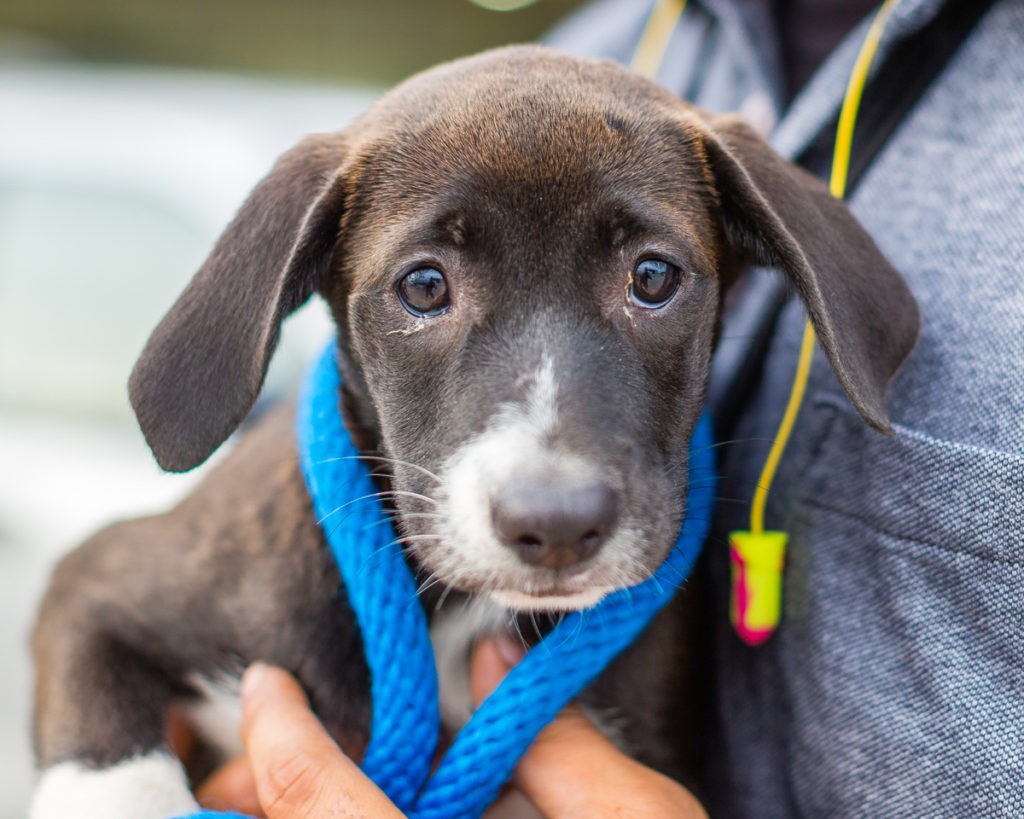 “I have a plane, I have resources. I was given an opportunity to help a little bit and I did,” Horvitz told me. And maybe it was easy for him, though it certainly wasn’t cheap considering the Hawker’s operating cost can be as high as $4000 per hour. Several weeks later, returning to the Dominican Republic to visit a friend, he made another delivery in Ponce. 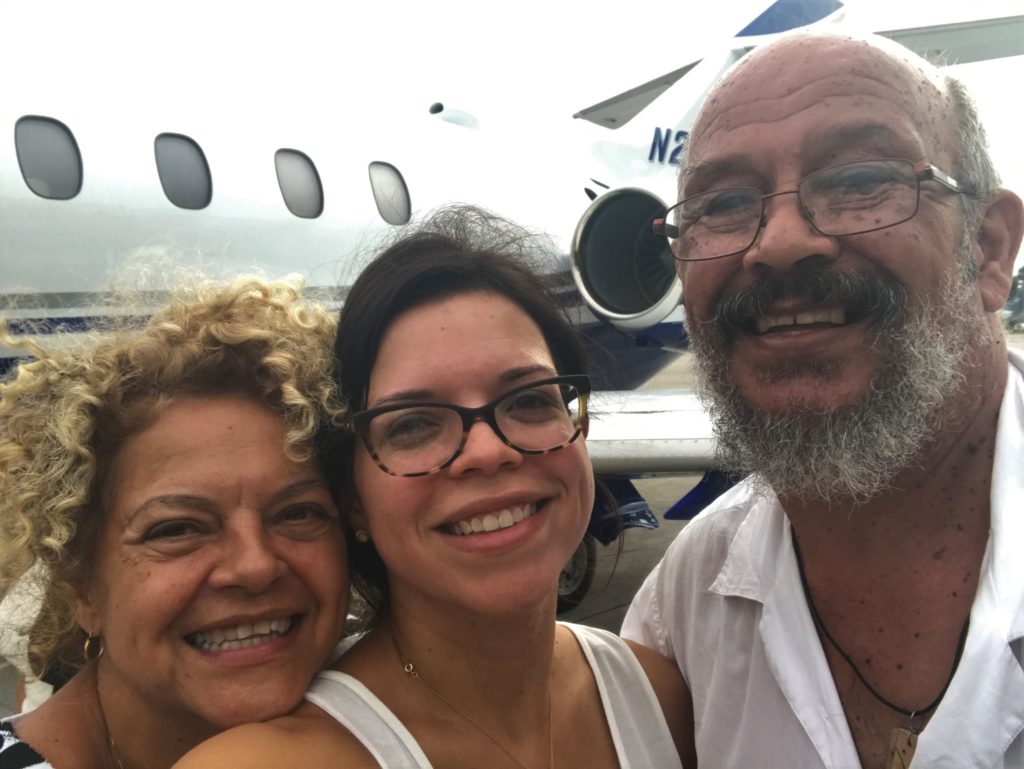 My brother and sister-in-law (seen above with Xamayta) and the abuelitas who traveled courtesy of Horvitz, were thankful to get off the island where they’d been stranded without power and a lot of other essentials since Maria marched through weeks earlier. Along Puerto Rico’s southern coast, a few of the hurricane’s many victims would find some small difficulty eased due to the big hearted-ness of others. At least one child’s life may have been saved with of the arrival of a simple tube for a dialysis machine. 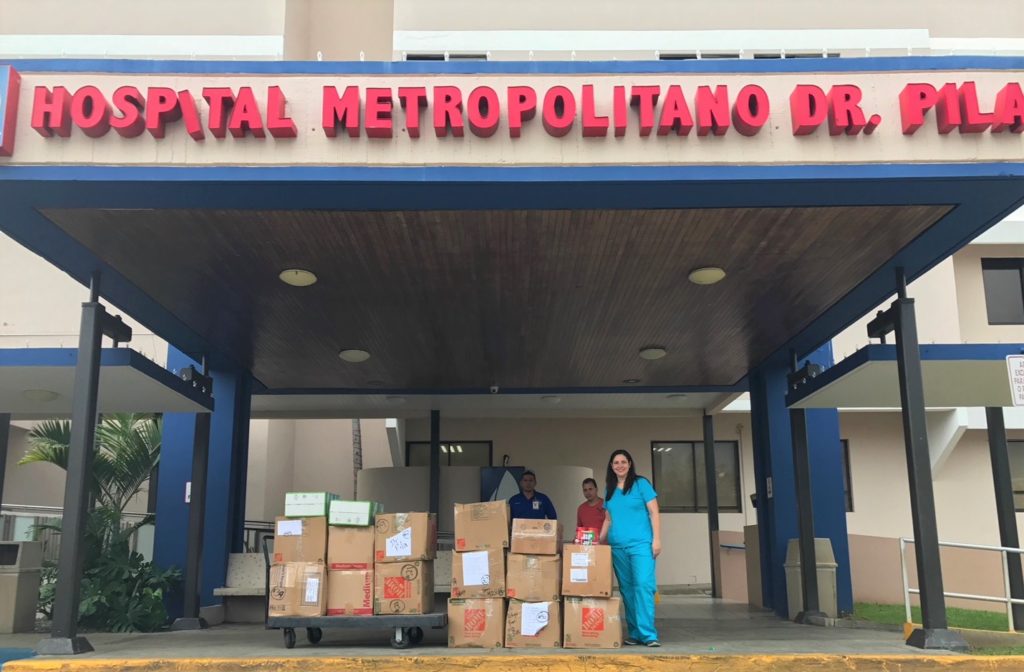 Acts of generosity seem to spread like ripples on a lake because when I spoke to Xamayta recently, she told me that she too was a beneficiary of all this charitable giving.

“A part of being a doctor is understanding what your patients go through and that’s not always easy to do,” she told me. “But I could feel the desperation of those doctors who didn’t have anything and I think I understand in a different way, the importance of water, electricity, diapers, soap, even Tylenol. We don’t appreciate them until we don’t have them.” 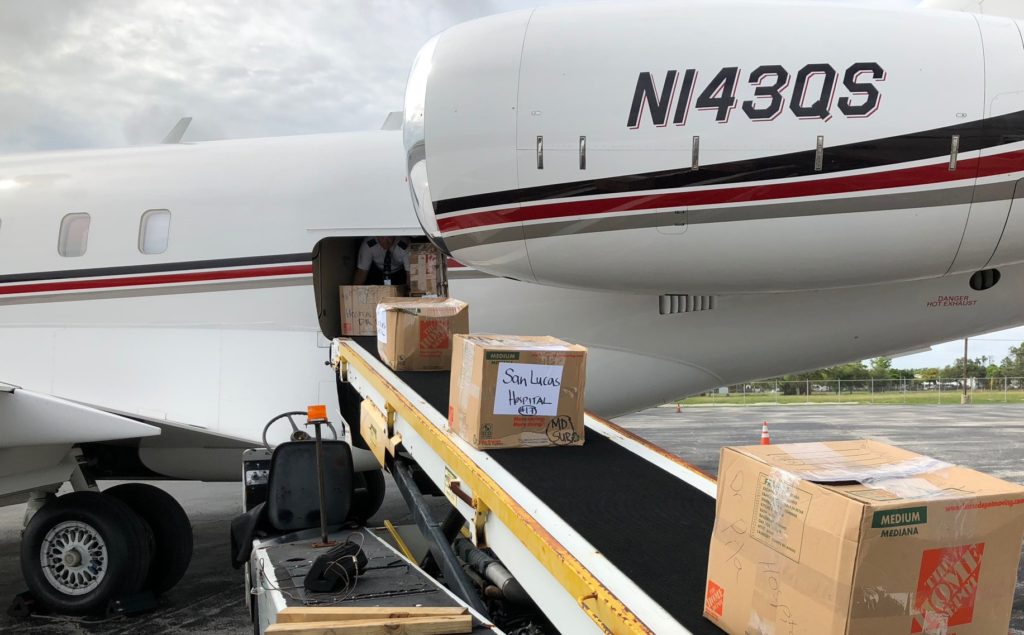 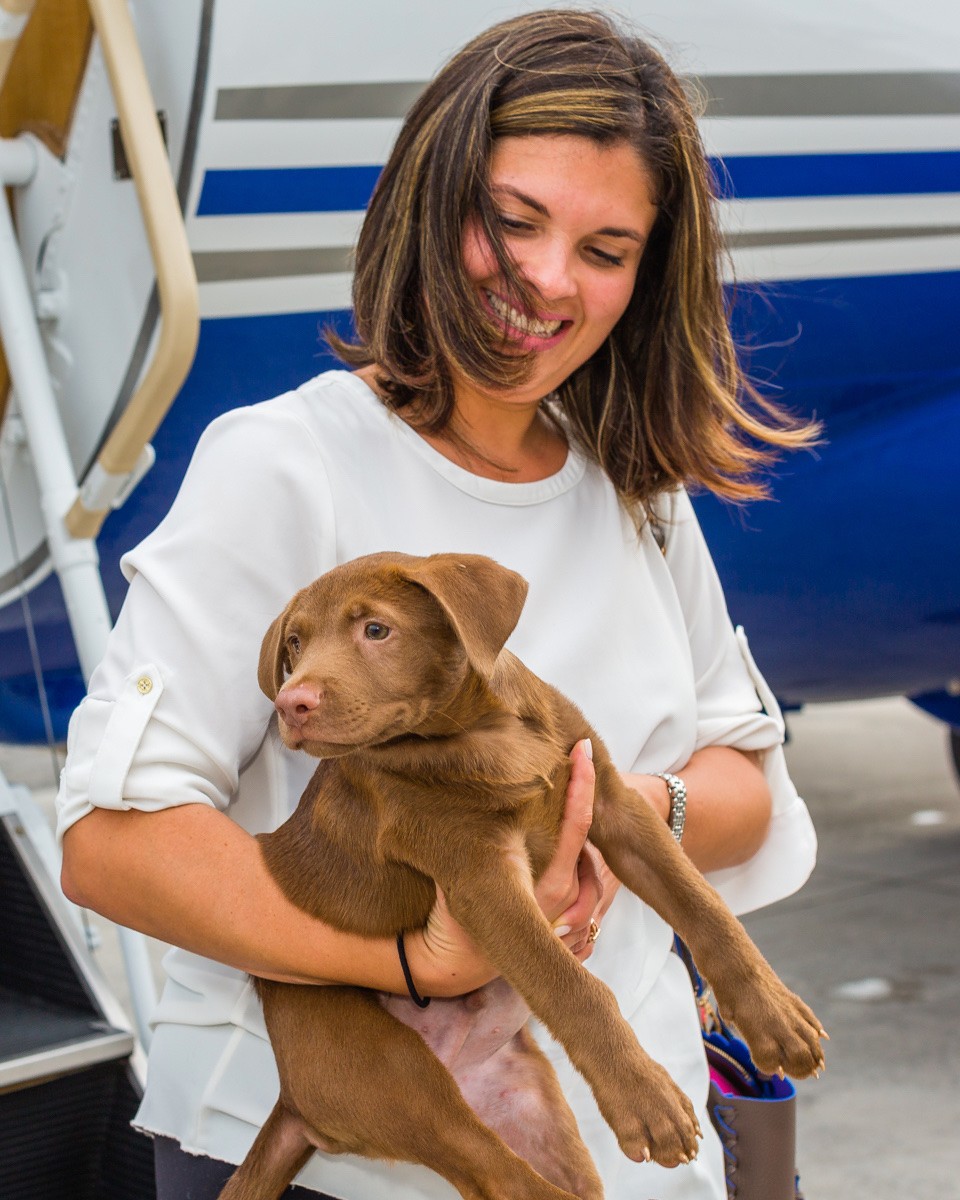 Dr. Yelliann Ruiz Irizarry an internist in Miami with one of the rescue puppies

Thanks to David Horvitz for also supplying many of these photographs and to doctors Madai Orgiz, Waleska Santiago, Jose Fragoso and Dalian Caraballo founder of Doctoras Boricuas.

One response to “Private Jets and Physicians; A Photo Story of Generosity in Puerto Rico”