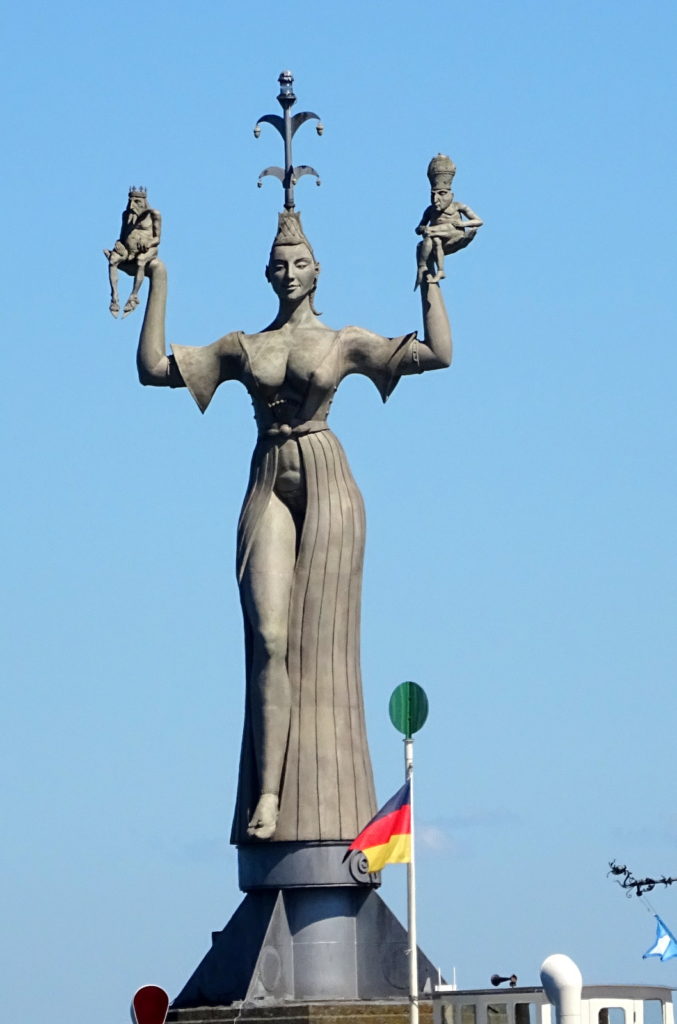 She is thirty feet high and weighs 36 thousand pounds and every inch of her voluptuous and barely-concealed anatomy is alluring – except perhaps for the two naked and wizened old men who sit in the palms of each of her upraised hands, one a pope the other an emperor.

The statute of the courtesan Imperia by German artist Peter Lenk is not just the most “photographed attraction” in the lakeside resort town of Constance (Konstanz in German) in the state of Baden-Wuerttemberg, it is the only public sculpture to so conspicuously memorialize a prostitute.

Revolving at a rate of once every three minutes to display her magnificent form from every angle, she presides over the harbor, symbolizing just one of the many sins that are an intricate part of this city’s history. If you can appreciate that, you’ll love Constance. 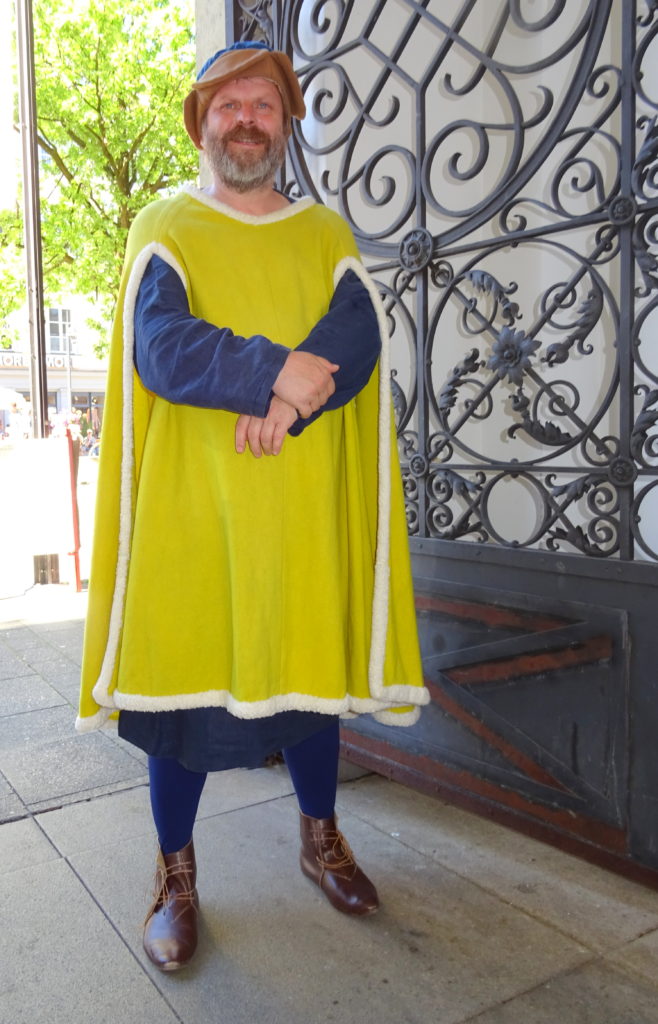 “Everything you can have, crime, sex, politics, history, everything,” is part of the story of Constance, Henry Gerlach told me during a tour of the city which began at the harbor with our view of Imperia on one side and on the other, the former warehouse that was the site of the most momentous event to occur here.

During the Council of Constance, from 1414 to 1418, the city population swelled from 7,000 to between 10,00 and 20,000 as representatives of the great European powers arrived to bicker about the three men who each claimed the papacy; Gregory in Rome, John XXIII in Pisa and Benedict in Avignon.

In this beautiful waterfront community, Cardinals, academics, Bishops and Archbishops settled in for the long-haul. As with any gathering of men – be it conventioneers or sailors, the prostitutes weren’t far behind. “It was like Las Vegas on Lake Constance,” Gerlach explained.

Of course it wasn’t all middle ages debauchery, there was political intrigue to attend to. And murder. And heretics to imprison or in the case of Czech reformer, John Hus, to burn at the stake. 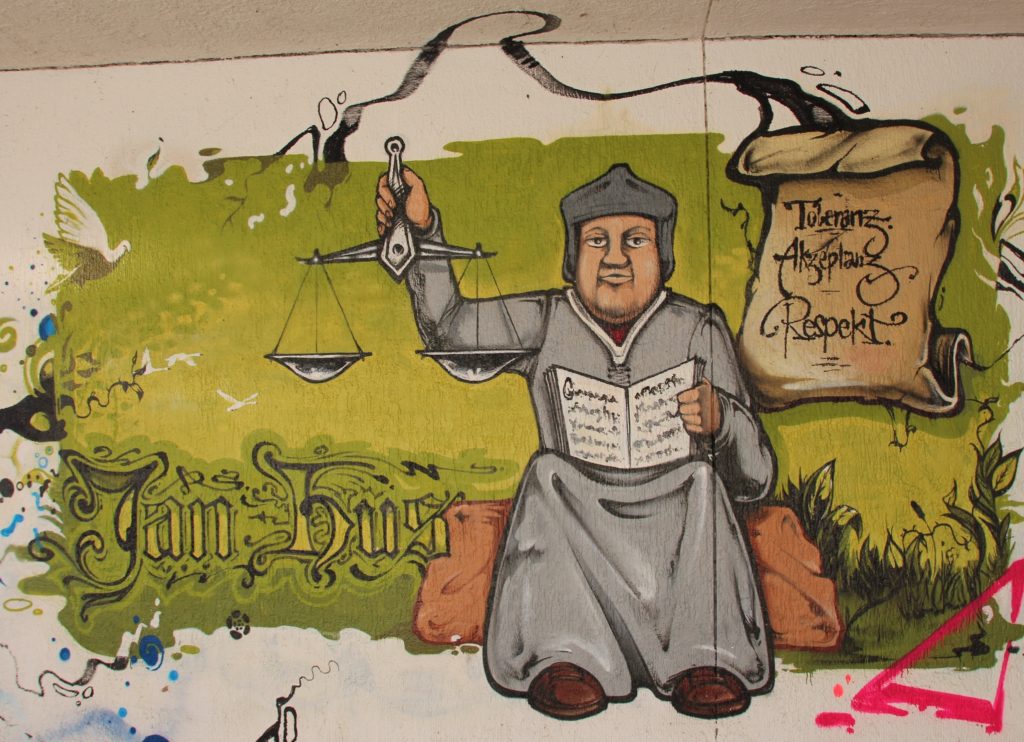 The site of that last event was also on the tour.

Leaving the harbor, Gerlach took me into the old city of cobblestone streets and we passed cute shops and flower-bedecked cafes where people were enjoying afternoon coffee and ice cream. Even against that charming backdrop, Gerlach had my full attention as he told the fascinating and sometimes gruesome story. It all sounded like a movie plot, until I came face to face with evidence of how fervent were the emotions of the time.

We were at St. Mary’s Church, the former cathedral, where 601 years ago today, poor erstwhile religious reformer, Hus was convicted of heresy for preaching against the practices of the Catholic church. (Note this was one hundred years before Martin Luther.) 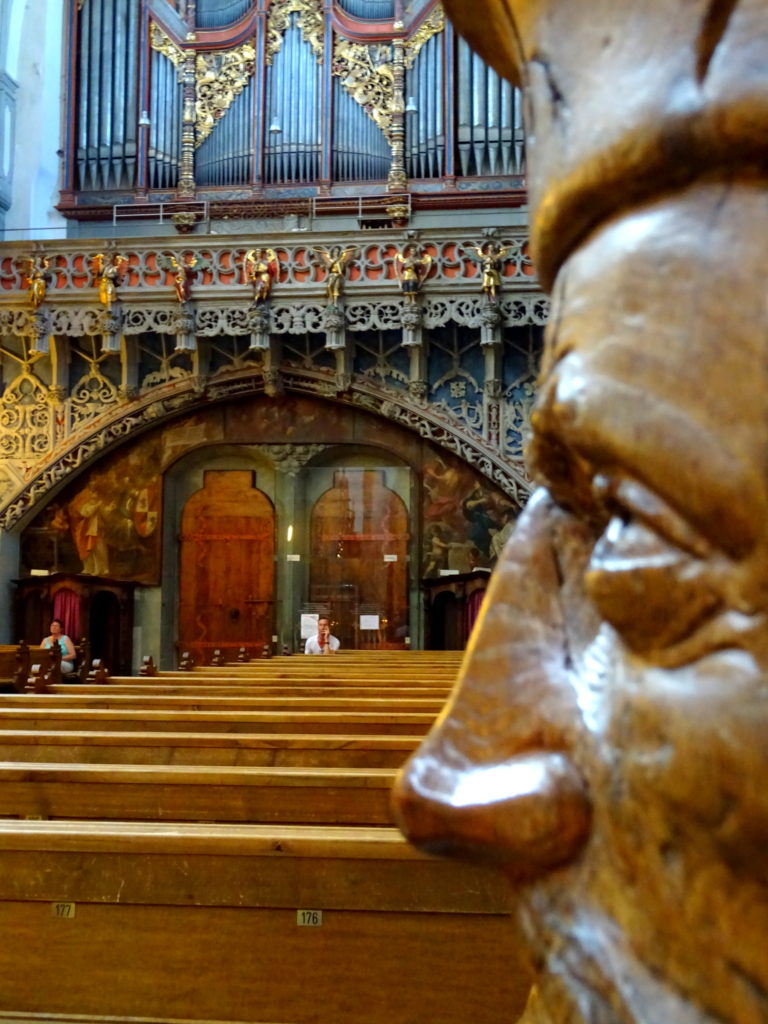 A wooden statue of Abraham about 4 feet high stands on one side of the pews. Gerlach points out an obvious repair to its face. In the mid-1800s, he tells me, a rumor started to circulate that the statue was not Abraham but Hus, the heretic burned at the stake. Devoted Catholics began to desecrate it until finally, someone sliced its snout right off. The line showing where it was reattached stands as a symbol of religious fervor as plain as, well, the nose on Abraham’s face.

To bring the stories of Constance alive, in his tours and in his recently published 800 page book In Nomine Diaboli, (sorry folks it is only available in German) Gerlach relied on the Chronicles of Ulrich Richenthal, a 15th Century resident of Constance. Sometimes Gerlach will even conduct tours dressed in a period costume recreated from Richenthal’s illustrations.

Rolf Knoll, a physician in West Hartford, Connecticut, took time off from a bike tour of Lake Constance to spent time walking through these historical sites with Gerlach as his guide.

“He was very informative and quite funny,” Knoll said. “His version of the prostitutes and the statue of Imperia was hilarious.” 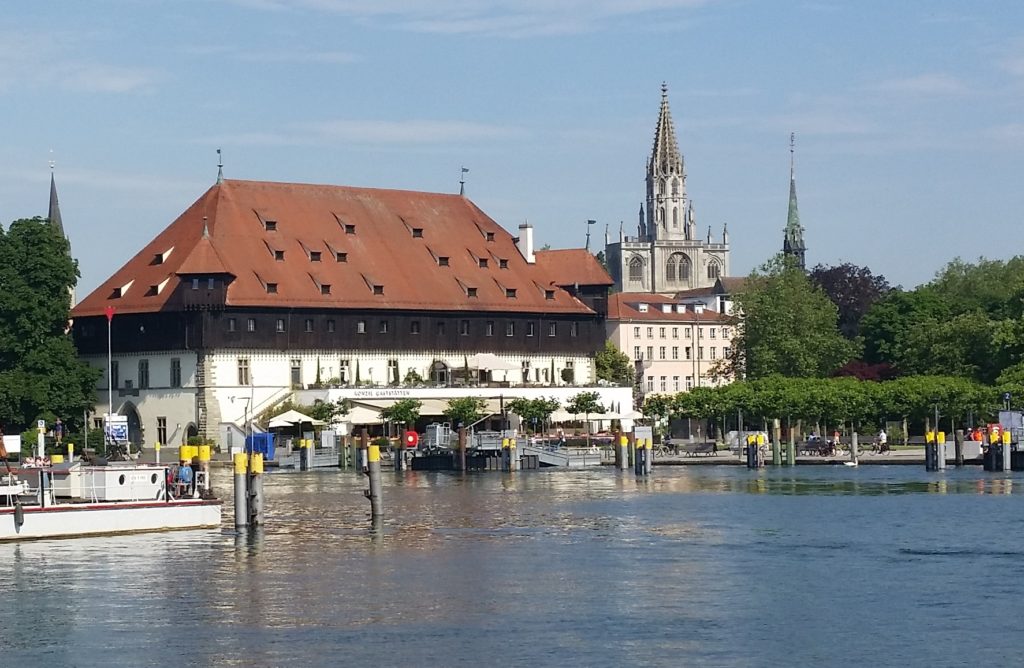 Today a restaurant is housed in the historic warehouse where the papal schism was finally resolved with the one and only pope elected north of the Alps.

Sitting on the expansive outdoor deck with a glass of wine, it feels far removed – if not in geography than in mindset – from the fifteenth century when the Catholic church was at the core of everything.

But settle in and look out at the harbor where ferries carry happy travelers across the sparkling lake and see Imperia rising tall and proud – the men of the day firmly in her grasp – and all of Lake Constance’s juicy history comes sailing back through time.

For more on my ride around Lake Constance by bike, read my Chicago Tribune article here.

One response to “Prostitute and Papacy Entwined in Lake Constance History”