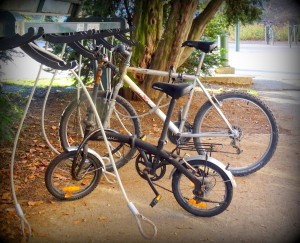 Somewhere between the too-slow pace of walking and the everything-passes-by-in-a-blur of driving, I think riding a bike is just right. Some places are more conducive to bicycles than others, Beijing and Hanoi are for the suicidal pedaler, too much traffic, not enough respect for the two-wheeler.

Seoul and Santa Monica, on the other hand are two of many cities where in a manageable distance one can go from city center to scenic waterside trail.  An additional plus in Seoul is free daily bike rentals for visitors.  That’s right, I don’t know how long it will last but the rental is absolutely free with helmets and locks included. How hospitable is that?

I picked up my bike at the Hongnamgyo Bridge rental center near the path by the Hongjecheon Stream, an offshoot of the Han River but before hitting the trail I pedaled downtown to see Seoul’s old-meets-new City Hall.

Eight decades and a passageway separate the Renaissance-style original stone building, now the city library, from the modern glass atrium filled with light and plants that is the new government building. 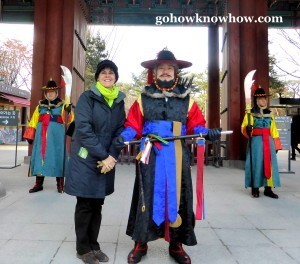 Mugging with the guard at Deoksu Palace in Seoul

I crossed the street and mugged for the camera with a guard at the Deoksu Palace before finding my way back to the urban bike path along the shore.

Within minutes I was away from crowds and enjoying birds, parks, waterfalls and historic sights at my own pace. Below are some (but certainly not all) of the places where touring by bike is just right for the way I roll. 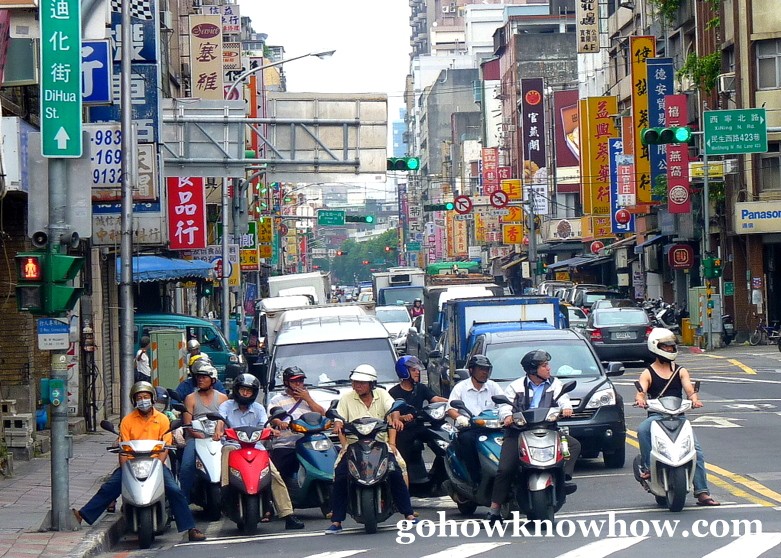 In Taiwan’s capital city, traffic is heavy with cars, buses and scooters but drivers are careful about the bikers in their midst. In 2009, Taipei started the YouBike bike share program and on my visit in 2013, there were more than 150 locations to get a bike throughout the city and bargain-priced at about U.S. sixty cents an hour.

I had a credit card but no local Taiwan phone number which is required for the YouBike Easy card.  The concierge at your hotel may do as the one at the Evergreen Laurel Hotel did for me, which is to walk me down to the bike stand and help deal with that little hassle. 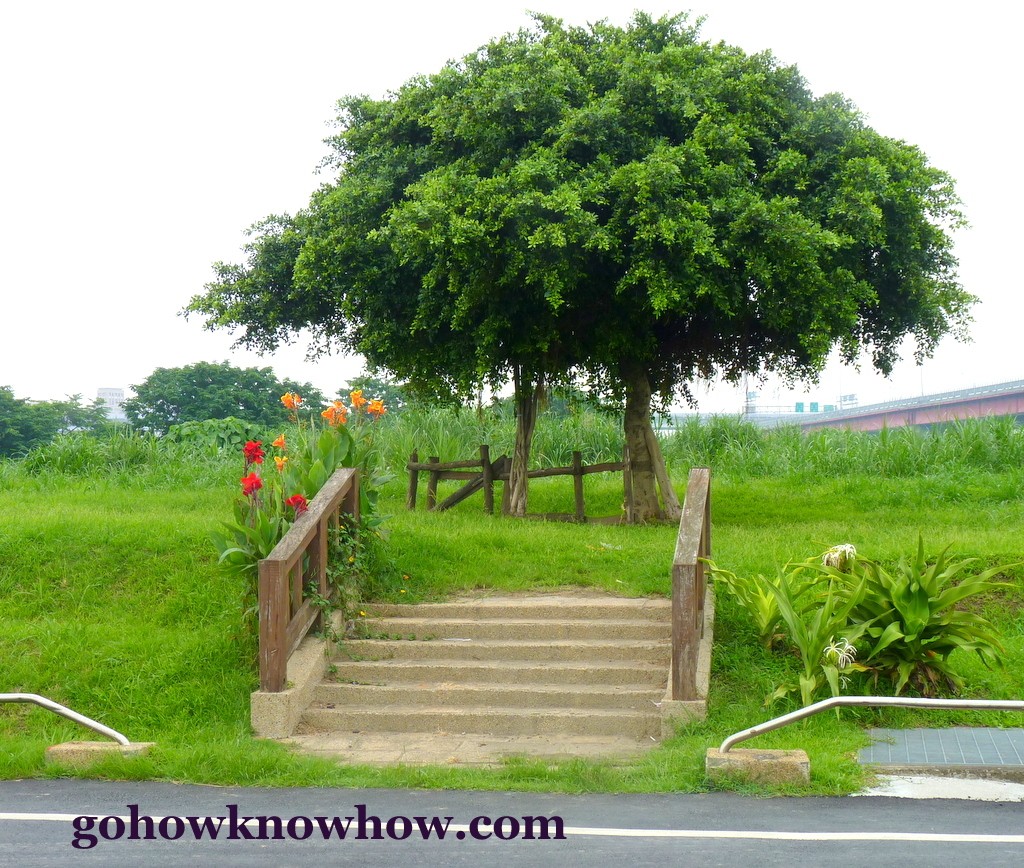 One of many beautiful places to stop along the river

Soon I was on my way to the Chiang Kai-Shek Memorial Hall, a complex of elaborate buildings including the National Theater and National Concert Hall. I looked but didn’t linger. I was headed to the riverfront bikeway that extends for miles along Taipei’s western edge.

Here I spent most of the day enjoying the view of the city; its high rises on one side and the shore birds wading in the grassy marsh on the other. 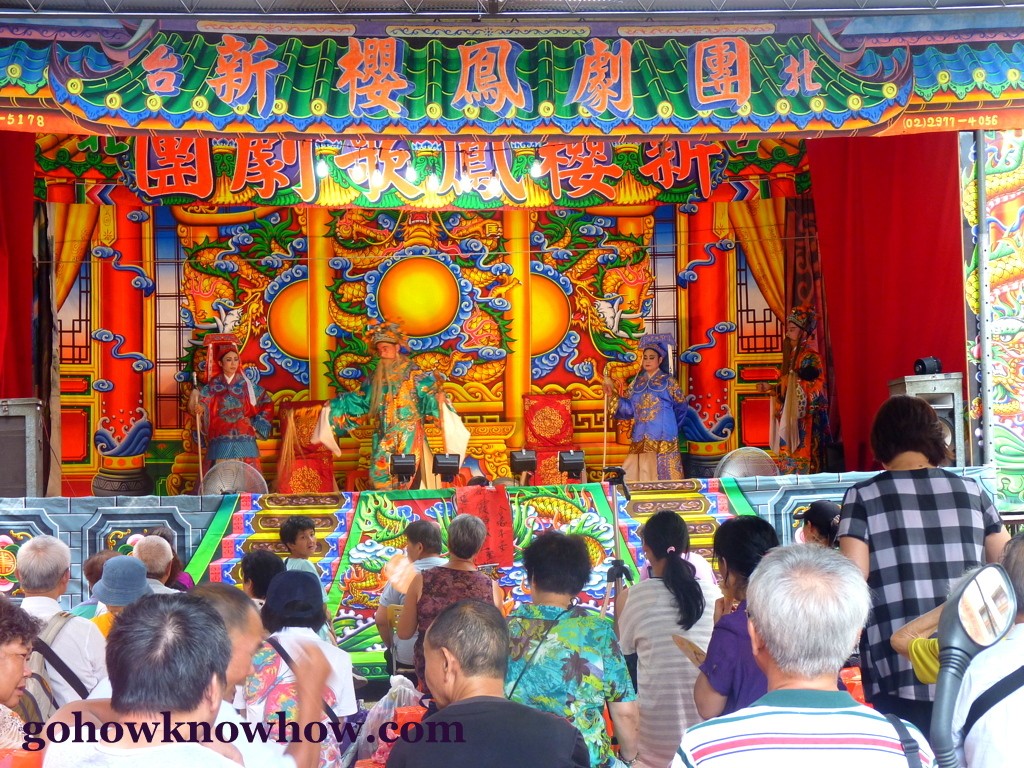 Street theater is elaborate and draws a crowd

Leaving the pathway for home, I stopped to watch a public theater performance which delayed my return until after dark. That lead to a quick tour by night of Taipei’s Xinsheng Park. A light designer has gone wild with the place playing around with the buildings and gardens. This made the final stop of my Taipei-by-bike tour especially illuminating. 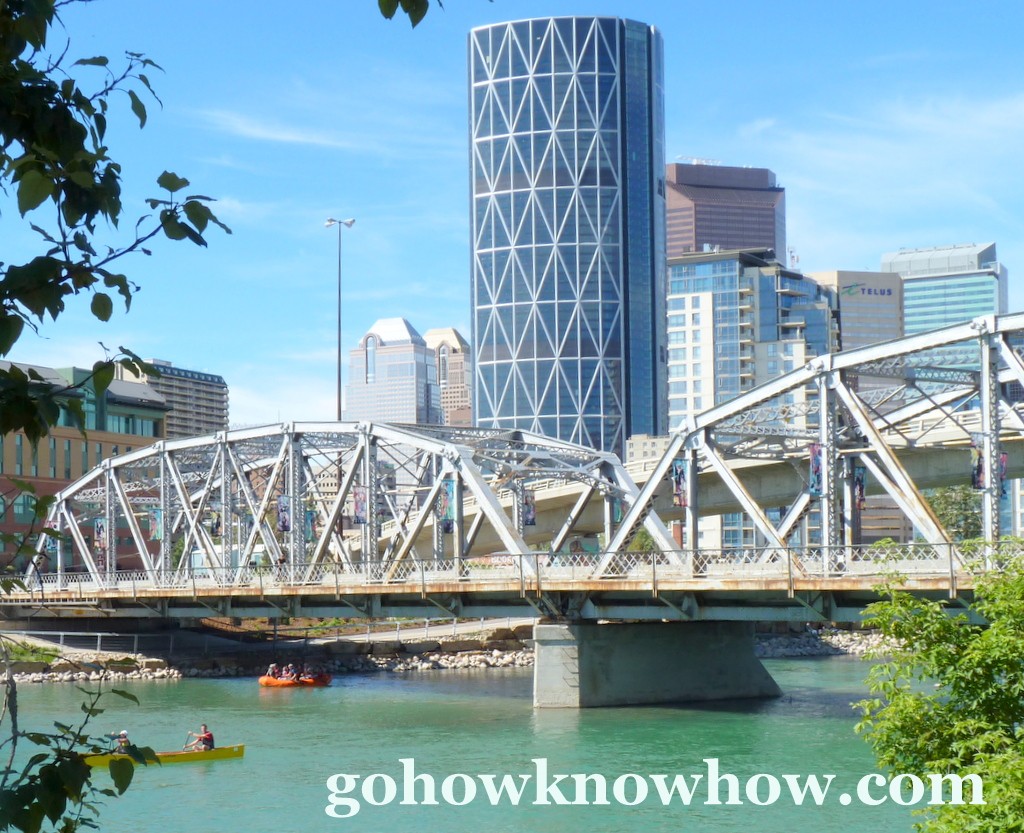 Don’t look now but there’s an explosion going on in Calgary as hearty Canadians take to the bike trails by the hundreds, more than twelve hundred every day pedal into the city center and why not? If there’s a better way to commute to work or tour the town, laid out as it is along the Bow River, I can’t imagine what it is.

On my visit in the summer, I spent a day riding from Calgary’s booming in-town airport through the urban core south to the enormous Stampede Fairgrounds then off across the railroad tracks to Inglewood on the Elbow River.

It was a wonderful ride on a warm summer day but lest you think bikes collect dust nine months of the year, consider the email I received last December from my friend Sid Barber (who took me on my very first airport tour by bike during that same visit). 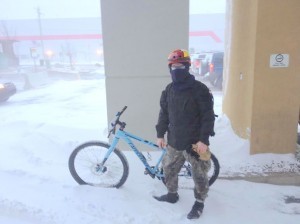 “It is -30C out with the wind chill,” he informed me, but he and Capt. Laval St.Germain were still taking their bikes to work at Canadian North Airlines.  He explained his reasoning to me saying, a car gets stuck in a snow bank and the driver will have to wait days to get plowed out. So even in the middle of winter, “biking makes sense,” he said.

With Sid’s machismo in mind, I cannot whine about the just-above freezing temperatures earlier this month when I made a day trip around Lake Annecy just south of Geneva. At 25 miles this would be my longest single day ride but I was not concerned about the distance. Though the lake is located in the French Alps, the perimeter bike trail is nearly flat, except for one lengthy climb between St. Bernard and Talloires. 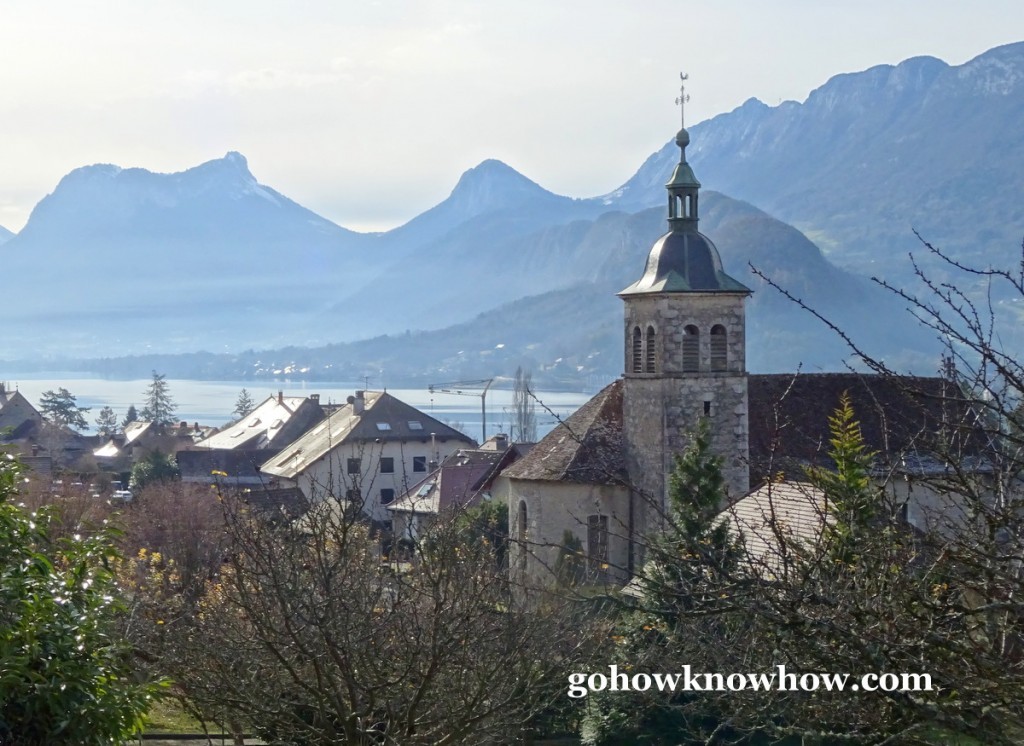 View on approach to Talloires

I opted to travel clockwise, so the most challenging part of the ride would be over before lunch. Not long into my journey the seat tilted, shoving me back so far I had difficulty reaching the handlebars. This was so uncomfortable, it threatened my ability to finish the trip.

Considering it was Sunday, finding a rachet to fix the seat seemed unlikely. In the town of Sévrier, however, I was advised to ask for help from a group of rowers waiting to board a crew boat at the little harbor.

“Tools? I don’t need no stinking tools,” or something like that in French, was the response of one particularly fit man in his sixties. With considerable strength he pushed the seat back into its proper position. A permanent fix? Unlikely, but as I pedaled away, shouting, “Merci beaucoup, magnifique,” I was confident I was set for the rest of the ride and indeed I was. 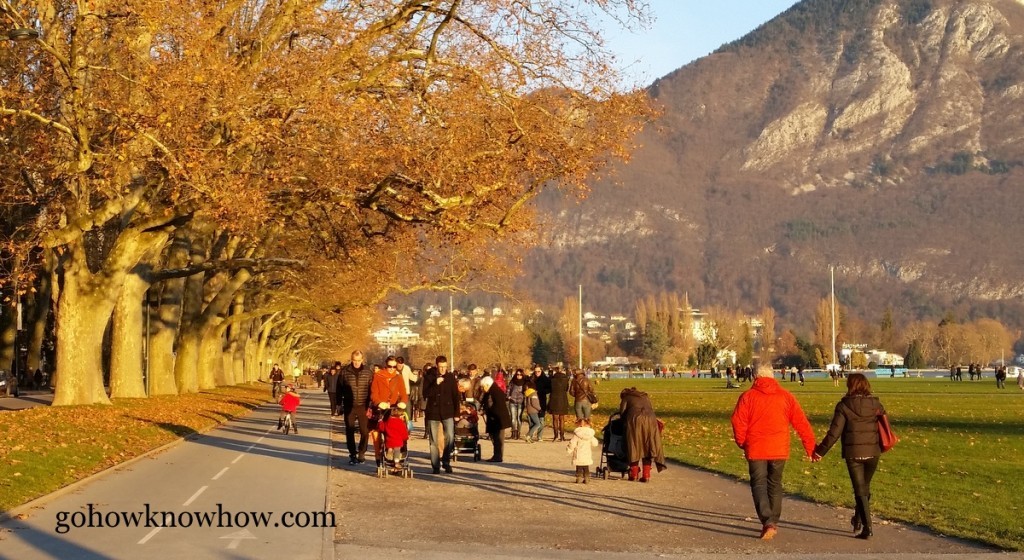 On the final stretch as the sun sets on Annecy

It took six extremely enjoyable hours to make the circuit. I blame my slow pace on the non-stop, breath-taking views that had me off the bike as much as I was on it, as I tried to capture with my camera the charm of millennium-old buildings tucked into snow-topped mountains, the colorful paragliders riding the winds and of course the clear and sparkling waters of Lake Annecy.  The December sun refracted into countless glimmers off the lake’s surface, the perfect reflection of a sparkling day. 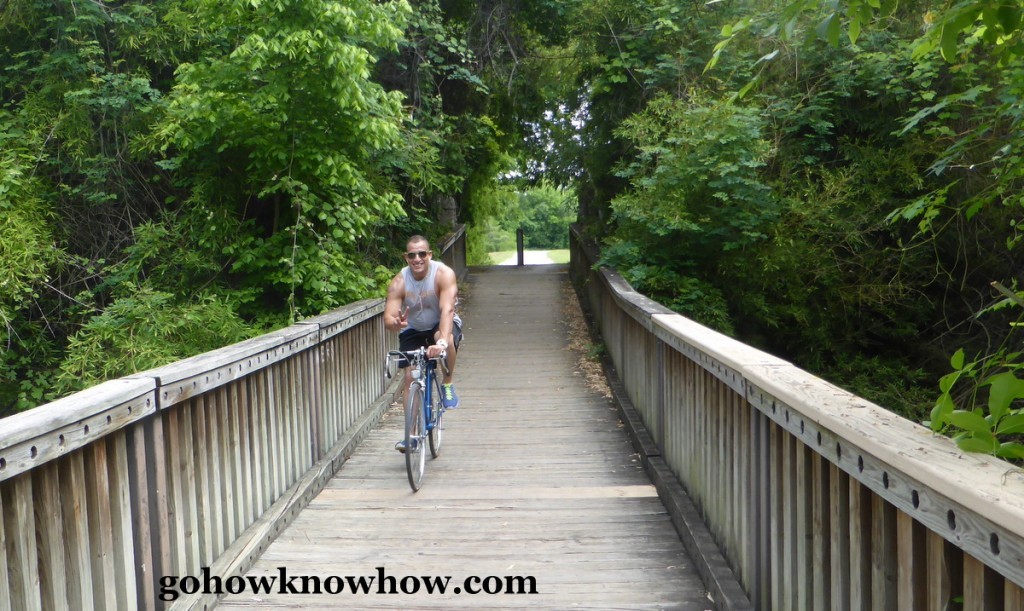 When the seat difficulty occurred on my Annecy trip, I was reminded of the time I abandoned my B-Cycle in San Antonio, Texas and rented one more appropriate for a safe and satisfying ride at Bike World in San Antonio’s Pearl Brewery neighborhood.

B-Cycle bike share has been operating since 2011 and while it claims 3,000 members and even more temporary users, the bikes are heavy and unstable and I don’t recommend them for anything more than a quick ride from A to B.

At Bike World, however, fit specialist Tim Tilton picked out a bike for me, made the necessary adjustments and reminded me a few minutes of preparation will make for hours of enjoyable riding. 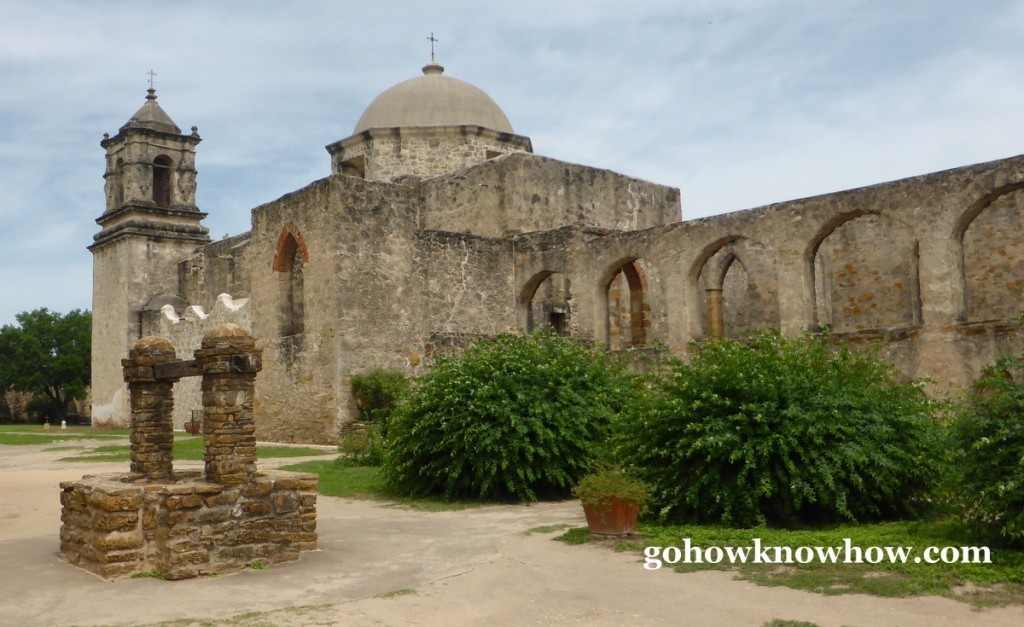 A stop along the Mission Trail

Half a dozen official bike trails, each longer than the next will bring you to the city’s sights. King William Historic District, the city’s Museum District and finally, to the 20 mile, mostly riverside route to the San Antonio missions starting at the Alamo.

The 1700-era San Juan, San Jose and San Espada missions are under the care of the National Park Service and rangers on the guided tours make the past come alive. 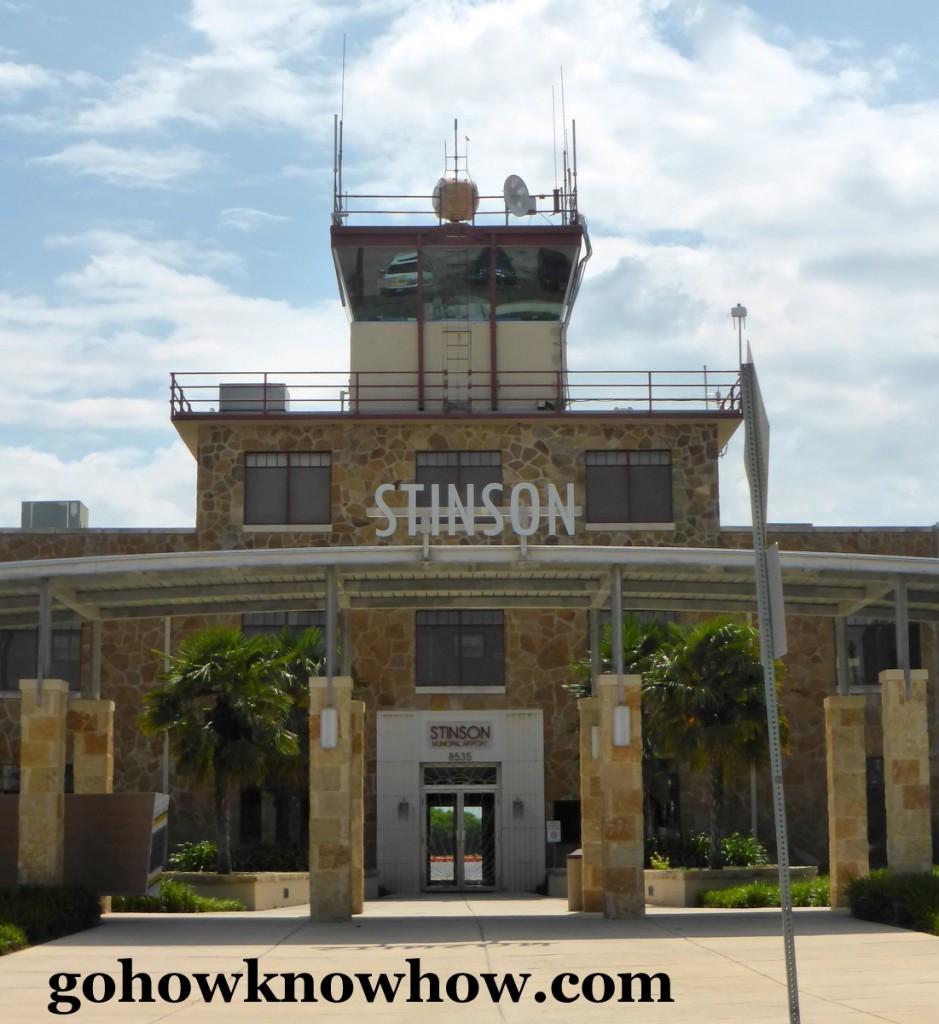 On the way home, (Sid, pay attention) aviation aficionados can cruise on by the century old Stinson Airport, the second-longest, continuously-operating general aviation airport in America.

What’s world famous about San Antonio is its charming central business district, with flower bedecked paths along the river and lovely places to sit and watch the water taxis go by. Full disclosure; the heart of this shopping/dining/entertainment section is pedestrian only. Go ahead, put a lock on the bike and take a stroll. 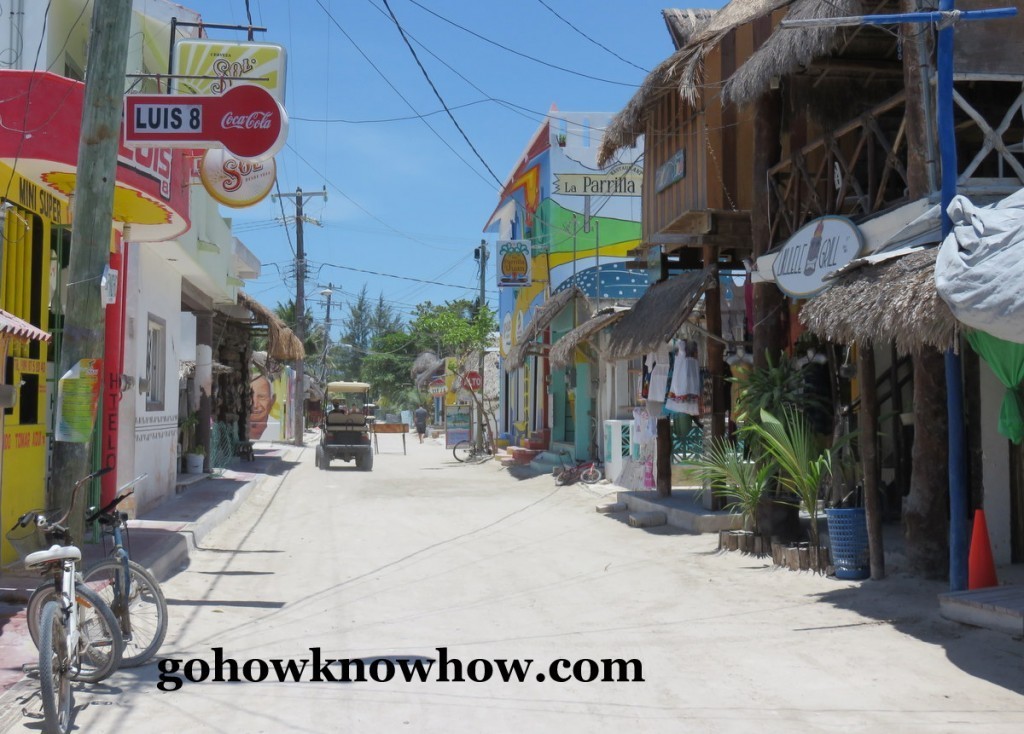 This tiny, sandy, island community a ferry boat ride off the northern tip of the Yucatan Peninsula is the place to go if you want to see nature from the wheels of a bike. The village of Holbox (pronounced Hol-bush) is populated by fishermen and businesses catering to the few adventuresome tourists who have already learned about this little (1 mile wide by 30 miles long) slice of paradise. But it is also home to an amazing assortment of birds including pink flamingos that you can actually see in flight as they travel along the sandbars.

The bike shops rent fat wheeled bikes (around $10 for the day) because that sand isn’t hard-packed all the way, making for some tough going. But this is one of those places so close to paradise that when you have get off and walk the bike, you know you are moving at the speed nature intended. 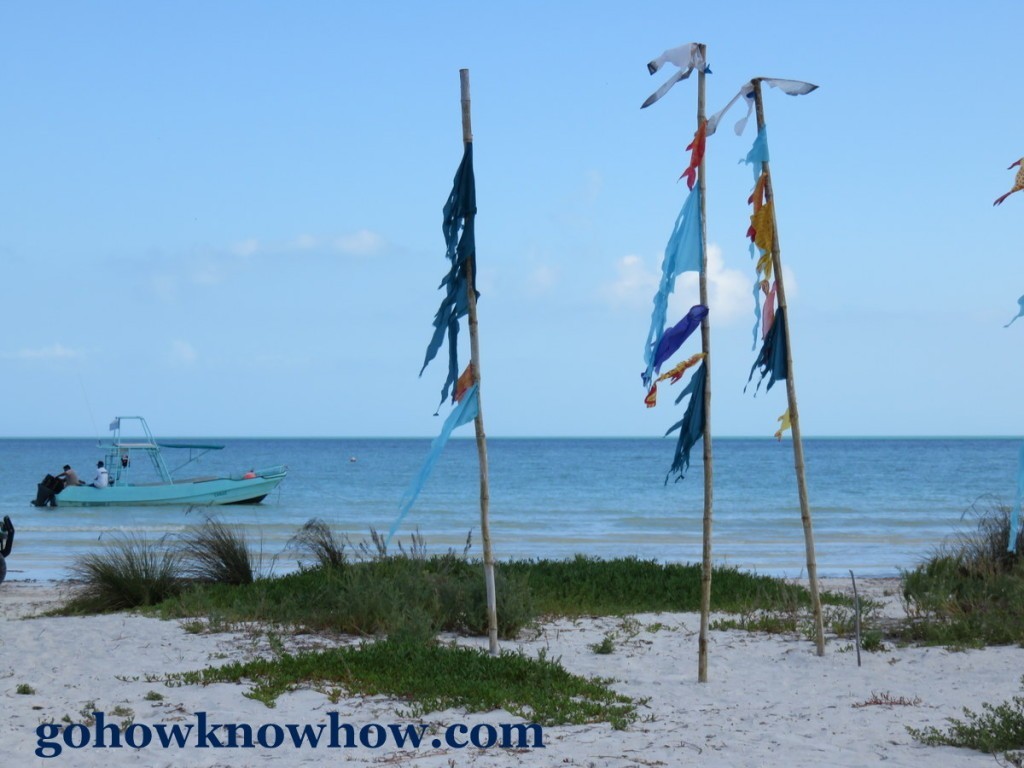 View from my bike on the trail 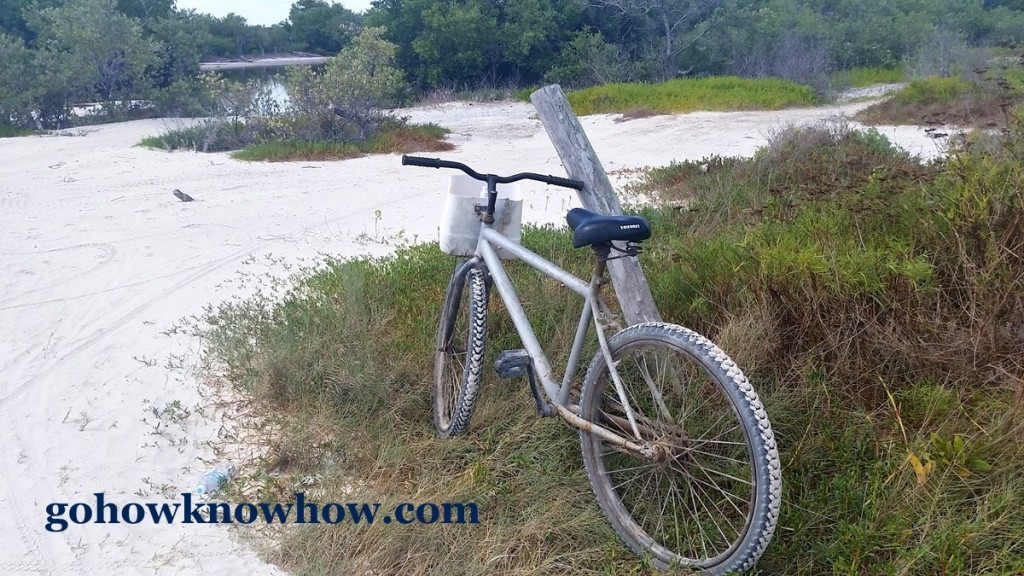 One must stop sometimes and take in the sights

One response to “Rolling Down the River; World’s Best Waterfront Bike Rides”