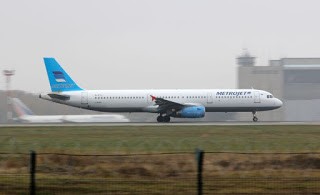 The blast that took down a Russian Airbus A321 over the Sinai last month, had to be triggered by a bomb, an experienced explosives expert said today. “If the information about the plane being at 31,000 feet is reliable, it’s not a fuel air explosion,” Merritt Birky, a former safety investigator with the NTSB told me. Lacking any indication that a missile hit the airplane, Birky’s conclusion eliminates the other possible scenario, that the plane came apart mid flight due to an explosion in the plane’s center fuel tank. 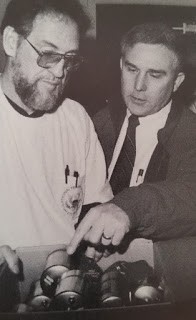 >Birky (L) in 1996
Birky, now retired, was the principal explosion and chemical expert in the four year investigation into the crash of TWA Flight 800 in 1996. While U.S. federal law enforcement officials were insisting for months that a bomb or missile took down the Boeing 747 shortly after it departed New York, Birky and his team were convinced an internal ignition of the plane’s fuel tank caused the accident which killed 230 people. That was the ultimate conclusion of the NTSB, though theories of a cover-up linger to this day.

In analysing the Metrojet accident, Birky said the cause could be determined by simple science. At 31,000 there is not enough oxygen density in the air to support combustion in a fuel tank.

“That’s about one-third of an atmosphere of oxygen,” Birky said. “So if the satellite info is reliable, I assume they
know the flash they saw was at that altitude, it has got to be an externally-initiated explosion, not from inside the fuel tank.”

“What you have is in contrast to TWA 800,” he told me. “You don’t have to sort out what caused it other than a bomb or a missile.” (My book on the TWA 800 accident is available by clicking here.)

Birky, who is also a chemist and a specialist in the toxicology of combustion products, suspects the explosive device was probably plastic, sometimes called C-4 or plastique and that there was plenty of it.

“It’s
not going to be a small bomb like Lockerbie,” he said referring to the altitude-sensing device that detonated on a Pan Am flight over Scotland in 1989, killing 270. “It can’t be because you’re not going to
have a big flash that can be observed by satellite.” 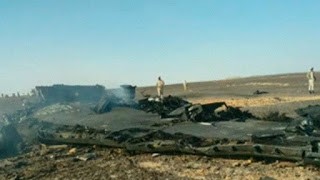 While “simple science” can eliminate a fuel tank explosion, that’s far from the only clue that investigators can use to find out what happened to the Russian-bound airplane. Much more evidence is on the ground. The bomb would do massive damage to the airplane and that will be hard to miss when looking at the wreckage.

Observing damage to the metal, evidence of fire and direction of smoke, all can help determine where on the airplane the bomb was likely placed and that in turn can lead to who might be responsible.

Other experienced aviation safety experts say photos of the tail plane don’t seem to show burn damage. Birky suspects the bomb was probably positioned in the landing gear wheel well or in a baggage or cargo compartment. 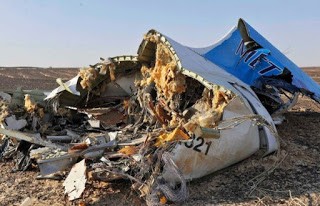 All of this means the crash of Metrojet 9268 is unlikely to remain a mystery. But for all those who predict the last sound recorded on the cockpit voice recorder will tell the tale, Birky says “that’s crazy stuff”, confirming my post on this subject earlier this week for RunwayGirlNetwork in which black box specialist Mike Poole said the same thing.

Who needs it anyway? As I told Robert Siegel on All Things Considered on November 4, what led to this disaster will not remain unknown for long. Evidence abounds. The only mystery is why the Egyptians are letting speculation run rampant rather than revealing what they know.