The Corona-Killer Airlines Opted to Ignore 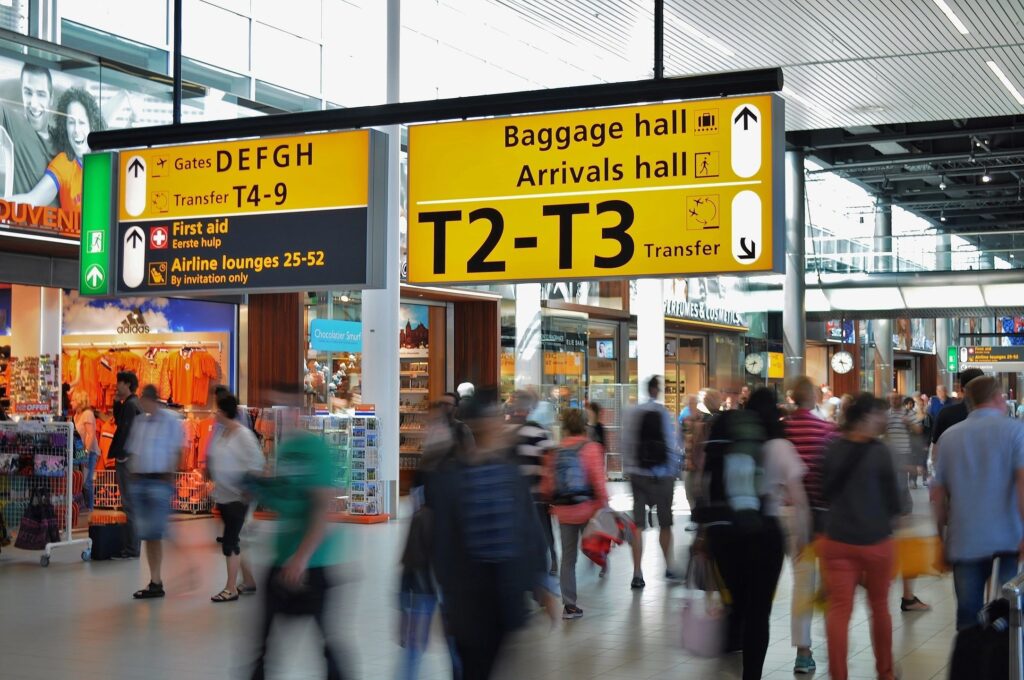 A history of ignoring the role of airliners in spreading diseases like the Coronavirus is coming back to bite the industry on the butt. Airlines are cutting their schedules which means cutting staff. They are parking airplanes and watching as share prices fall by double digits.

“The turn of events as a result of COVID-19 is almost without precedent,” said Alexandre de Juniac, Director-General of the International Air Transport Association.

And yet, Devin Liddell, a futurist and consultant with the Seattle-based design firm, Teague argues that Ebola, MERS, H1N1, SARs, and other global health scares provided plenty of warning. Airlines and the governments that regulate them failed to acknowledge the importance of keeping airplanes sanitized.

“There are a lot of links between transportation and the spread of diseases,”  Liddell told me late last week. “If the industry had more foresight and invested in becoming more resilient, they’d be more prepared.” 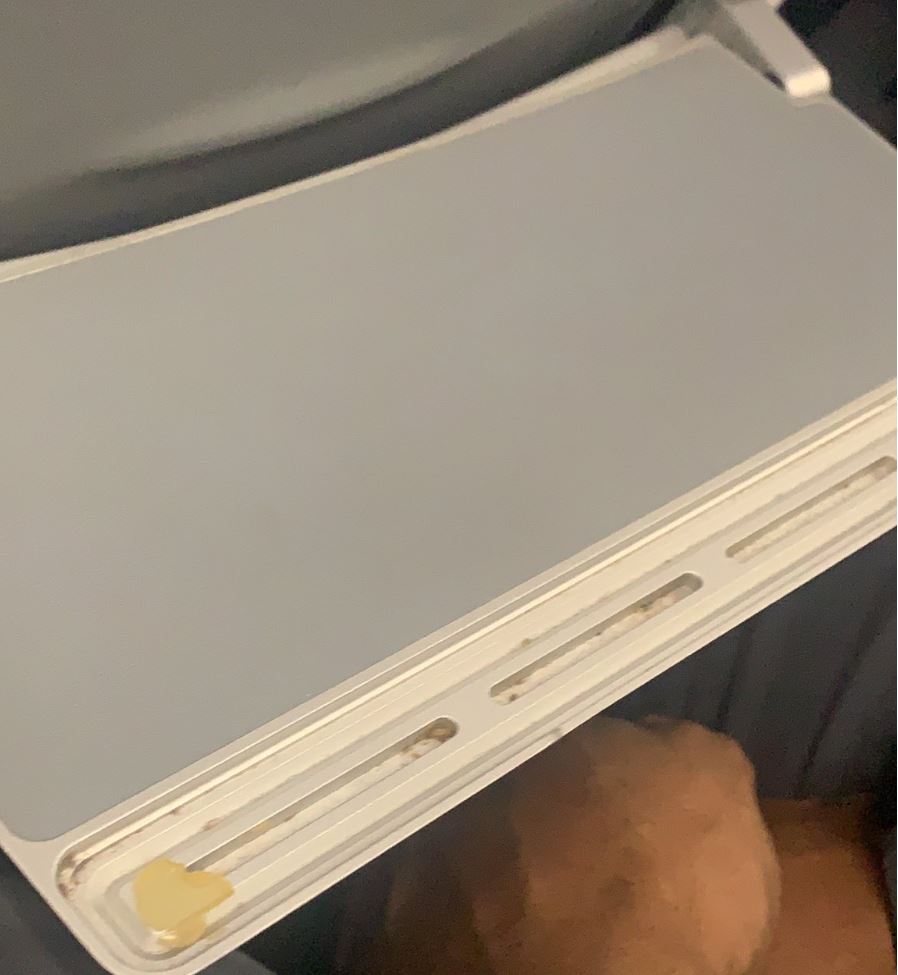 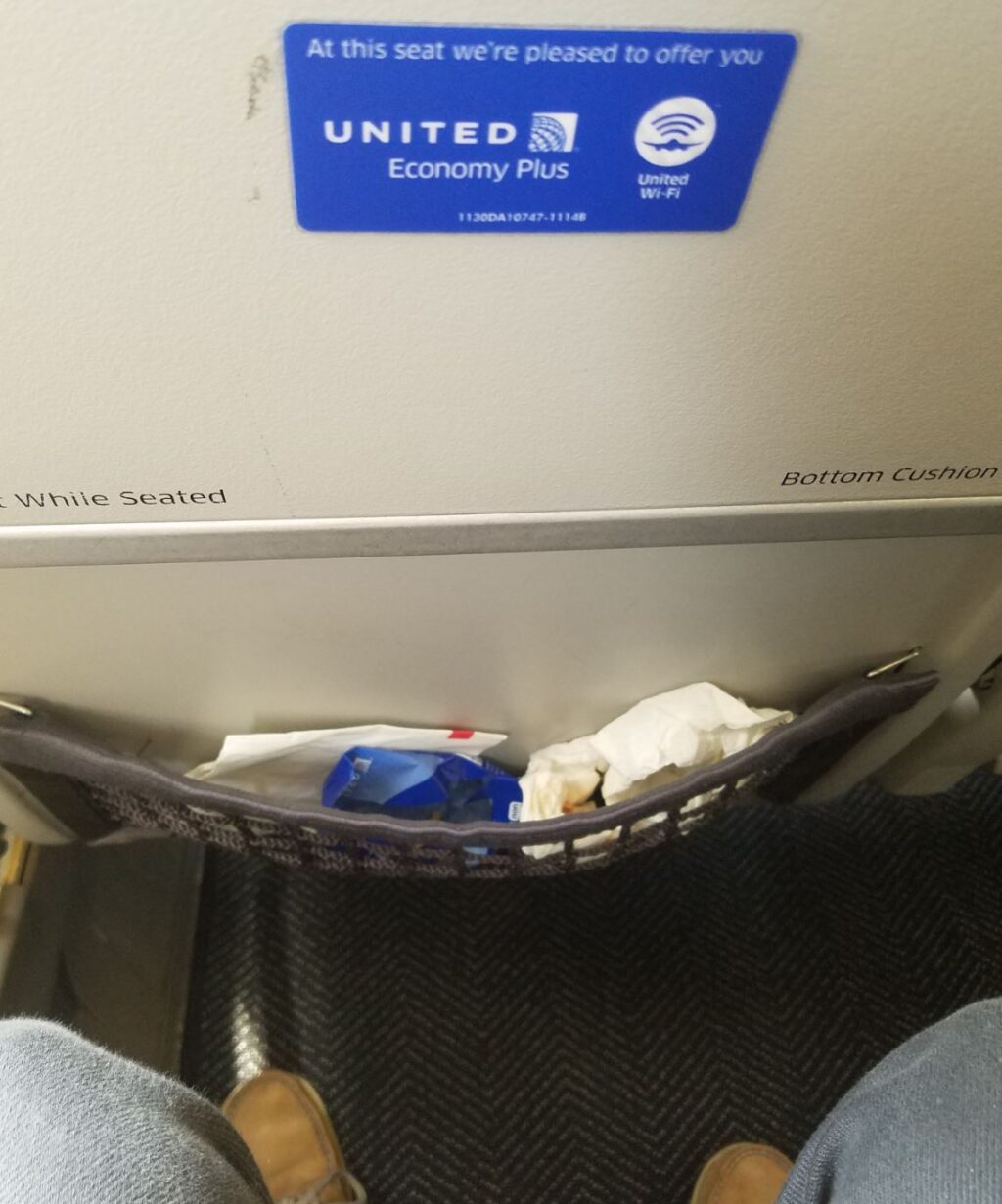 Dirty airplanes, including detritus on trays, cellophane, tissues and even disposable diapers in seatback pockets and litter on carpets are a mainstay of aviation news stories, not to mention Twitter, where the above photos were found. But what we’re talking about here is much bigger than that. Everyone – even those self-isolating in caves – surely knows this by now.

So it is notable that years ago, when an enterprising father-son team from Los Angeles was pushing an invention that could disinfect an airplane in minutes, only one airline expressed interest.

In the early 2010’s, Elliot Kreitenberg and his father Arthur, a physician and inventor, had a small side business making machines to disinfect soccer balls. Around the time that the Ebola Virus became a health crisis, the two men began to wonder if their use of germ-killing Ultra Violet C radiation for athletic equipment might be applied on a larger scale. Elliot Kreitenberg said Virgin America invited them to use their airplanes as a testbed for the Kreitenbergs’ new product, a fold-up germicidal light distribution panel perched on a airplane trolley-sized cart. 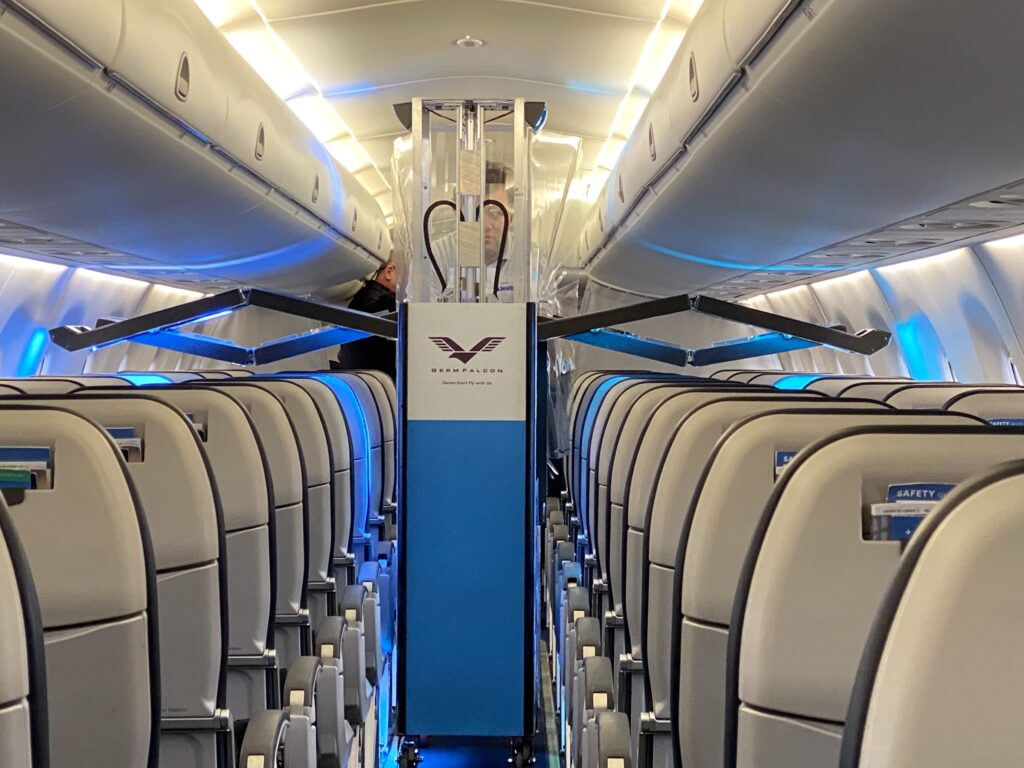 “Since that time we have sort of pivoted to health care,” Kreitenberg said, adding, “what we’re doing is groundbreaking.”

As the world watches country after country slamming closed their borders, our shock is due in part to how accustomed we have become to open skyways linking far-flung destinations and making even the most remote locations accessible. Twenty-two thousand cities were directly linked by air in 2019.  One must ask, how could the airlines not have anticipated that some of these travelers would be carrying and therefore freeing diseases from former isolation?

Liddell, who learned about GermFalcon at an aviation conference several years ago, suggests the airlines weren’t unaware of the risk they were just unwilling to invest in mitigating it.

“They were disinterested. They don’t want to pay for that and they were not interested in that narrative at all,” Liddell said.

It is a well-established fact of airline economics that money is not made from airliners on the ground. Some airlines tout the speed in which they turn around aircraft. For a time JetBlue even publicized that pilots and flight attendants were responsible for tidying up after flights to minimize time at the gate. 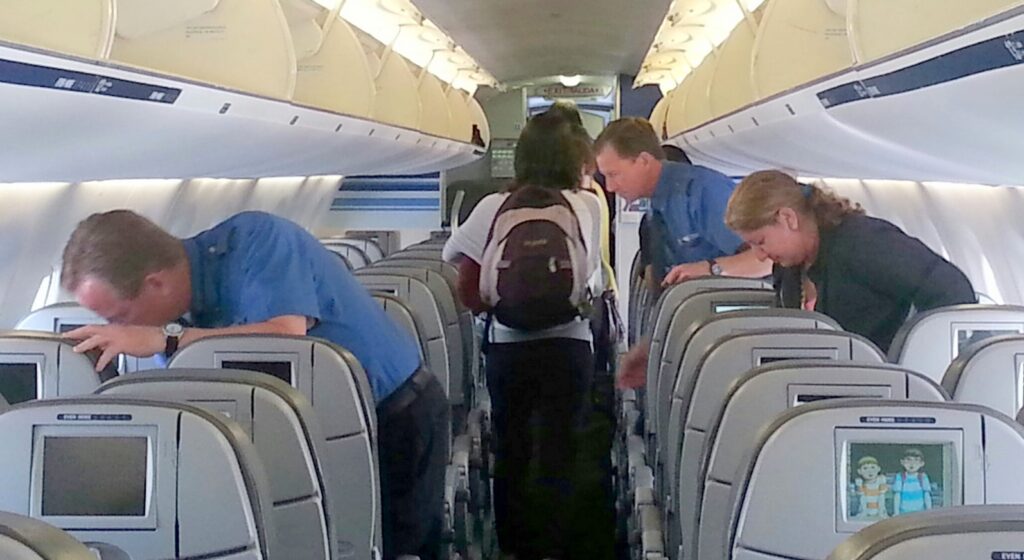 Airlines knew there were few regulations for cleanliness and even the guidance came from a variety of different government agencies, creating a useful ambiguity.

“The Starbucks at the terminal has a letter grade for its sanitation practices,” Kreitenberg told me, “but cross the jetbridge and there are no more regulations.”

This makes it difficult for passengers who do sicken to hold the airline liable according to an article by Mark E. McKinnon, an aviation lawyer with Fox Rothchild.

“The burden would be very high,” McKinnon told me in an email, particularly with Coronavirus as the incubation period is 14 days. Passengers would have to show they were infected on the airplane, he said. Now, “with so many community outbreaks, even with expert medical testimony, it would be hard to establish an airline as the probable cause.”

Until Coronavirus, passengers mostly grumbled about the discomfort of being so close to their fellow travelers and the unsightliness of dirty seats and tray tables. Now they are putting two and two together. What they can see may be gross, but what they can’t see can be literally sickening and in some cases, deadly.

To address this rising concern, Delta Air Lines released a video explaining its new process for disinfecting aircraft with a germ-killing fog it will use at the end of the day on its long-haul fleet.

The Kreitenbergs meantime, are finally getting their big break.  Last week, Paine Field, Seattle’s newest commercial airport, hired the company to disinfect the terminal and three gate areas of the airport using a device called the UV Hammer, which works like the GermFalcon with UV light.

“It’s the cleanest airport in America,” Elliot Kreitenberg bragged. The GermFalcon could soon be deployed on Alaska Airlines aircraft operating from Paine.

Brett Smith, CEO of Propeller Airports which built and operates Paine Field, said as soon as he heard about GermFalcon, he was interested. 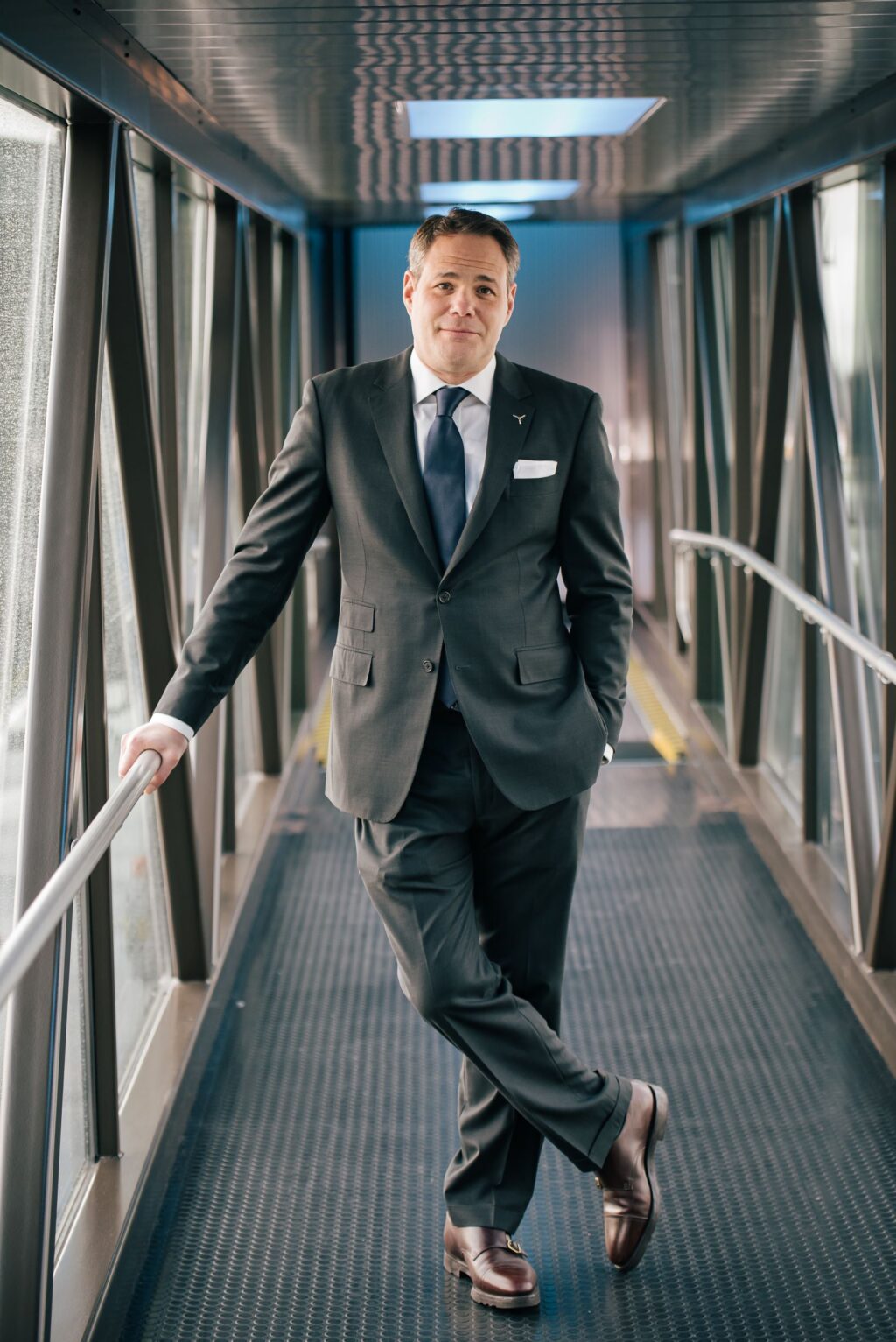 “One of my board members sent me information on it and as soon as I saw it we were on the phone with Elliot and Arthur,” he told me. The airport tested the product on Monday and Wednesday the service began. “It happened incredibly quickly,” Smith said.

From Smith’s point of view that may well be the case. But considering all the airlines and regulators that didn’t want to see, learn or even think about the ways airliners can incubate and spread viruses like Corona, the delay is has been inexcusably long.

One response to “The Corona-Killer Airlines Opted to Ignore”