When Night Falls in Cadiz Music Provides the Light 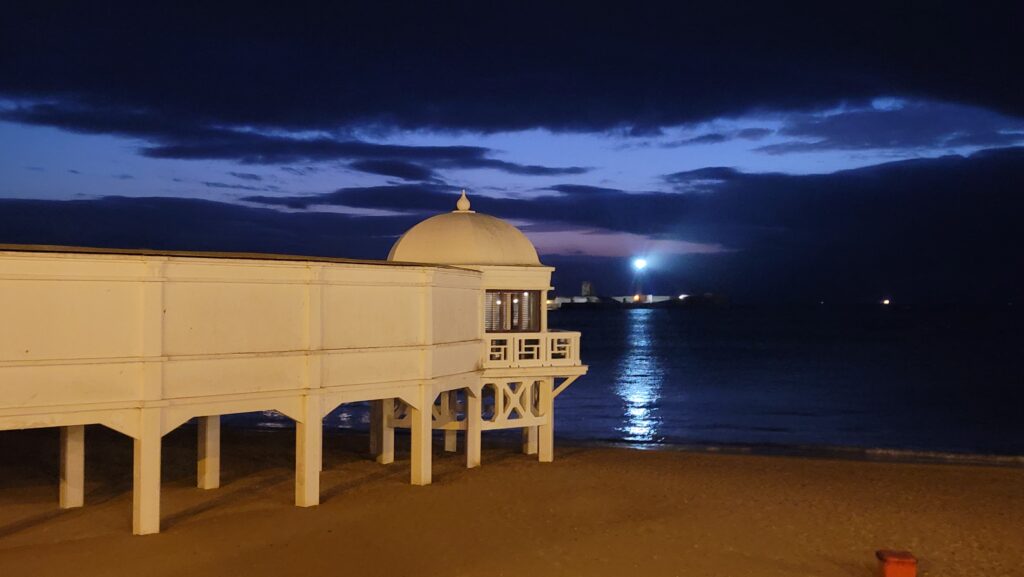 By my reckoning, I’ve spent more than 100 days in Cadiz over the past few years. That’s notable since my only knowledge of this Andalucian town before my first visit in 2019 was what I’d read on Google after entering the search term “warmest places in Spain in January”. I could not spend another winter in Connecticut. Cadiz fit the bill.

I could list 100 treats I’ve since discovered in this treasure box of a town, (and in fact, I’ve already written about a few) but I’m going to confine this post to tonight.

First of all, life happens on a different schedule here. The sun doesn’t rise until nine. The streets don’t come alive until 11. Walk by the cafes at noon and the tables are crowded alright, but folks are drinking coffee because lunch doesn’t begin until two. It is the same confounding thing at night. Coffee, beer, wine and snacks are served at what I’d consider dinner time, but you won’t get a nightly meal before nine.

Well, that’s about the time I was headed home for bed having finished a glass of wine at the charming and historic Hotel Argantonio. But I was stopped at the sound of men singing coming from an outdoor restaurant.

This in itself wasn’t so odd. There’s always music somewhere in Cadiz. I listened to the Piano Angel performing by the sea on the Avenida Campo del Sur one Tuesday around sunset.

Then last Saturday on a bike ride through the abandoned military battery at San Fernando I came across singer Jorge Lebron getting photographed for his new album. The band was gracious enough to allow me to listen while they performed. 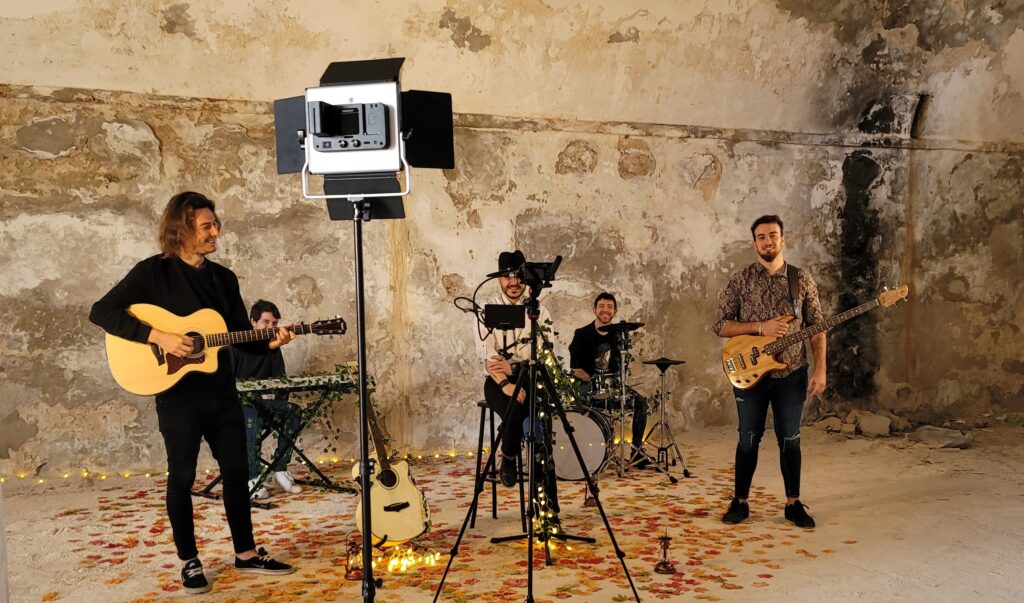 What can I say, it’s a musical place. And it’s a place where passersby are encouraged to become the audience.

Of the men I found as I got to the Mafia Restaurant two were playing lutes.  A third had a bandurria, a Spanish stringed instrument something like a mandolin that is used for folk music. There was a fourth man with a guitar and two singers. They beckoned me to sit down and stay awhile.

They performed a song about Puerto Rico (I didn’t know it, but how thoughtful!) They did a Spanish language version of a song sung in the Portuguese Fado style. I knew they were getting serious when the singer stood up from the table. He was giving his all to a magnificent and heartfelt rendition of the Peruvian classic Flor de Canela.

Before their food arrived they were on to (and I was joining in for the chorus of) Celito Lindo, “everyone’s favorite Mexican song,” Juan Pablo, the lute player closest to me noted.

They sounded so good, I thought they might be professionals, but Juan Pablo said, no, they were musicians who got together every Thursday night just for fun. They call themselves the Claustrovadores. And by their Facebook description they get together to chat, sing, laugh and enjoy themselves. I think they’re doing more than that, they’re sharing their bonhomie with everyone around them.

Cadiz Centro is the old part of town, 18th century stone buildings line into streets so narrow, only a few are wide enough for cars. This makes music resonate and rebound so that it is layered with footsteps on stone and conversation swelling and receding as people flow by.

The mornings come late here, that’s true but when the sun goes down the vibrant colors of sound saturate the night. 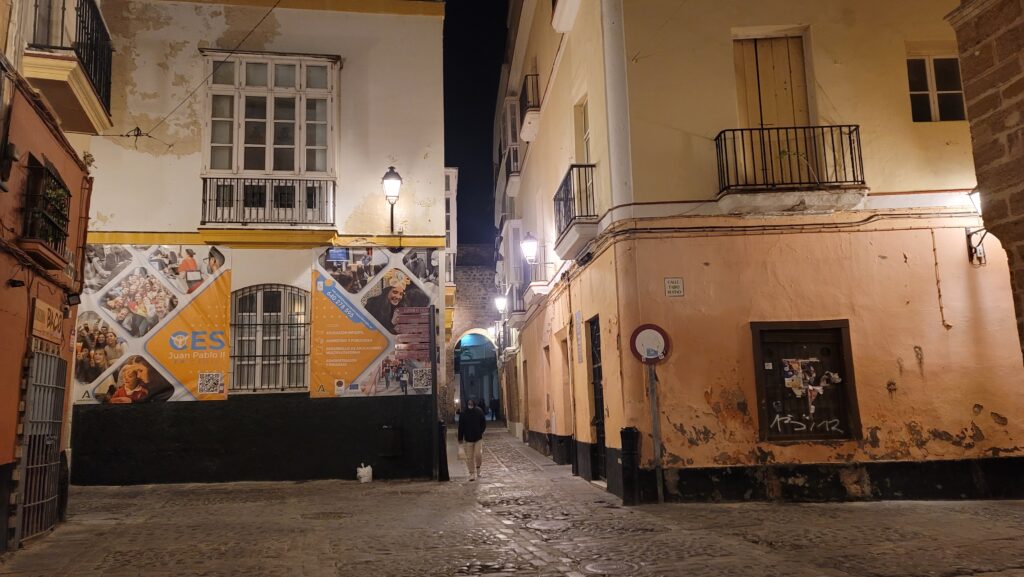 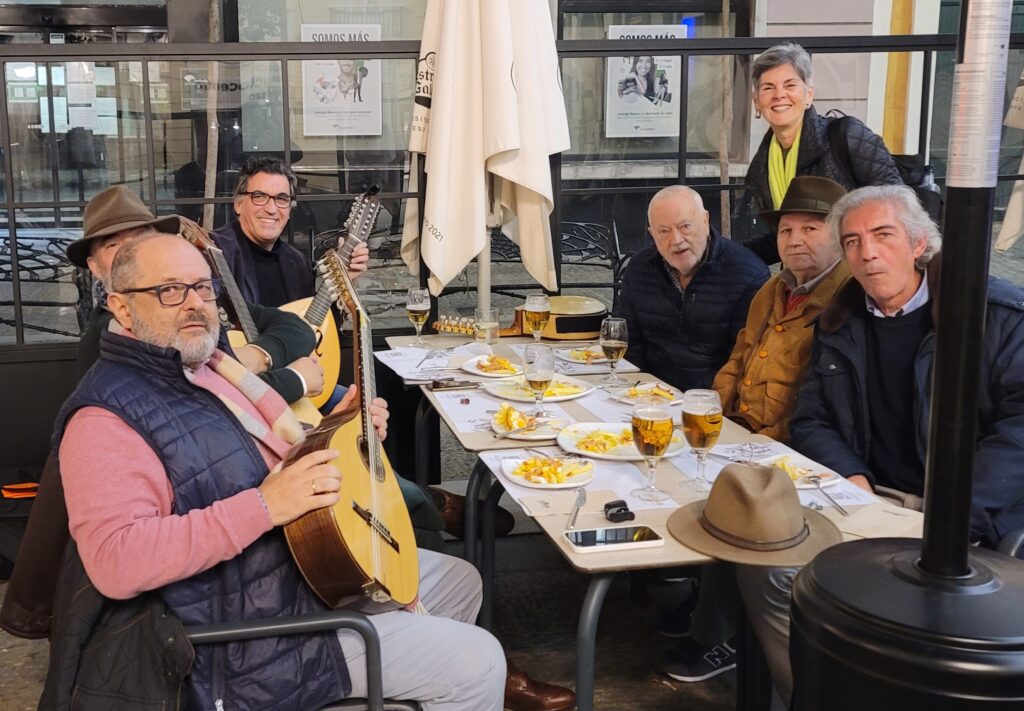 Categories: Go How Know How