Today You Wish You Were Me 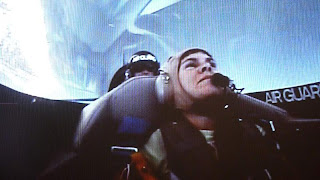 The best place to see an air show is on the ground and this is where several hundred thousand New Yorkers will be for the Bethpage Air Show at Jones Beach on Memorial Day weekend. The best place to sit for the air show, however has to be the seat in front of Lieutenant Colonel John Klatt, on the aerobatic plane he flies for the Air National Guard. 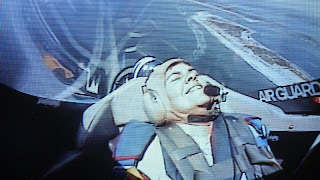 When performing at shows across America, John flies in a Panzl S330  a 1,200 pound single seater – which makes it an inappropriate choice to invite a guest to ride along.

So today, stunt pilot and John Klatt air show team member Bill Kerns was flying the Panzl to our starboard, a Bonanza chase plane was off to port carrying New York Times photographer Chang Lee and a CNN cameraman while John took me in the tandem Extra 300 L.

Yes, there was room for two in this plane, designed by German engineer Walter Extra.  It’s a snug fit and I was glad because when the Gs start running up and down like pianist jacked up on caffeine, what I really wanted was the airplane’s strong embrace.

On our flight this morning over New York City and Long Island, John gave a point by point explanation of how the airplane would accomplish each stunt he had planned. We did aileron rolls, snap rolls, torque rolls, barrel rolls, a hammer head turnaround, an Immelmann maneuver and some lovely loops.

I know the loops were lovely because when the plane was nose down and I was staring at the Atlantic Ocean, I could see the plane making graceful curlicue shadows on the water. Otherwise, I had no idea what all that fancy piloting looked like from the outside. I can only extrapolate from air shows I’ve seen in the past and You Tube videos of John’s  performances.

John’s a great pilot. His public relations staff, Rebecca Brosemer and Victoria Arocho are geniuses to offer him up to reporters for demonstration flights. A morning spent in his company and the entire world of aerobatic flying starts to make sense. 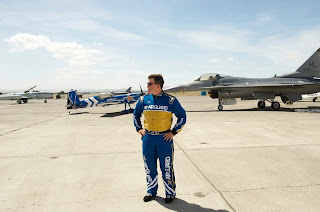 I remember the first time I came to understand that planes fly because they are following physical laws, not defying them. Until today, though I didn’t realize that the same is true for stunt flying.

I love air shows. I’ve been to dozens of them over the years but I have to say until I got inside the plane with Klatt, I did not understand why a pilot chose to perform these seemingly suicidal acts. I failed to appreciate how aerodynamics, fluid dynamics, gyroscopic dynamics have been harnessed over the past century, enabling the air show pilot and the air show airplane of today.  It is nothing short of astonishing.

This is my takeaway from a morning spent backstage with the John Klatt Airshow. I feel a bit like Dorothy in The Wizard of Oz

, who goes to bed in Kansas and wakes up in Technicolor. At the end of the movie, though, Dorothy pulls back the curtain to find the wizard is disappointingly less than she expected.

I have found the exact opposite. The man and the machine behind the dazzle of the air show, elevate the science and the artistry of aviation. 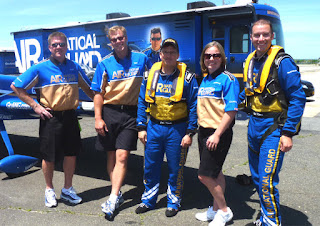 10 responses to “Today You Wish You Were Me”