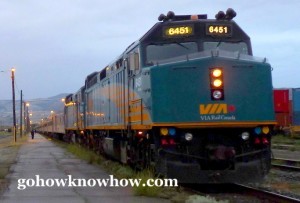 Dawn in Kaloomps our first stop

One does not decide to spend four days on a trip that can be accomplished in 5 hours by air without some weighing of the pros and cons. On the upside, taking the VIA Rail train from Vancouver to Toronto would give me the chance to actually see a part of the country with which I am not familiar. It would give me expanses of uninterrupted time to finish working on a writing project and also a plus, I’ve always, always enjoyed sleeping in a moving vehicle, train, boat, car it makes no difference.  The VIA Rail trip promised 4 nights of glorious slumber.

On the downside, four nights also means four days – days cut out of my busy schedule. I could not judge in advance whether this would be time I would consider well-spent. 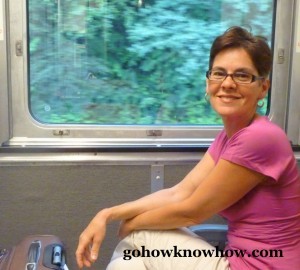 In my little sleeper car as we depart Vancouver

The answer is unequivocally yes. As each day unrolled on the rails, my need to fill every moment with “productive activity” diminished.  This is not the only thing the trans-Canadian journey has to offer, but it it sure rang my bell.

I boarded the train in Vancouver, Canada’s westernmost big city on a Sunday night and awakened the following morning to a terrain that is so rugged and undeveloped it could have been the setting for a Hollywood western. I was slack-jawed as we plunged through passes between mountains that dwarfed even our half-mile long, two locomotive train. 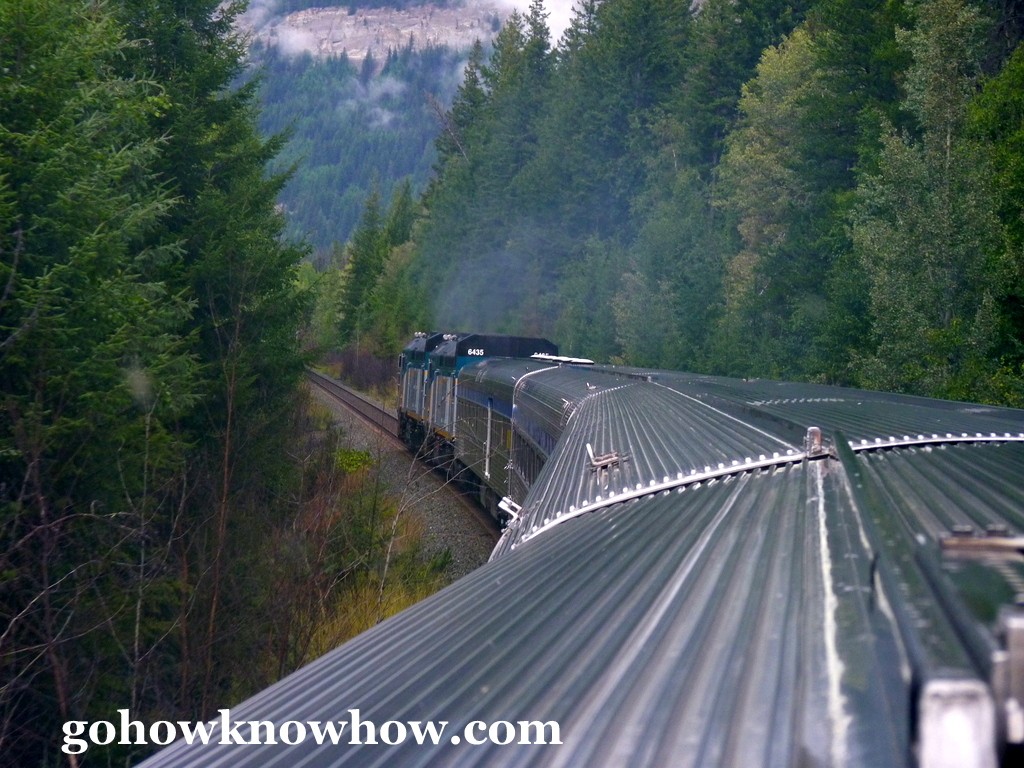 Rolling through the Rocky Mountains 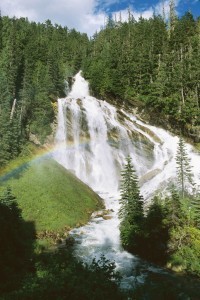 Pyramid Falls from the train. Photo courtesy VIA Rail

The engineer slowed down as we passed Pyramid Falls, with its thundering 300 foot high gushing start, three outcroppings along the course and fan-shaped finish.  This remarkable waterfall should be a major tourist attraction, but due to its inaccessible location is like a private gift from Via Rail to its passengers.

Atop a power line tower I saw a perfectly symmetrical bird’s nest, gigantic in size. Not far off, I saw what might have been one if its inhabitants, a bird of prey perched on a roll of hay in farmer’s field. 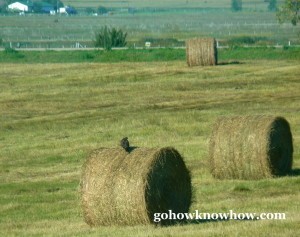 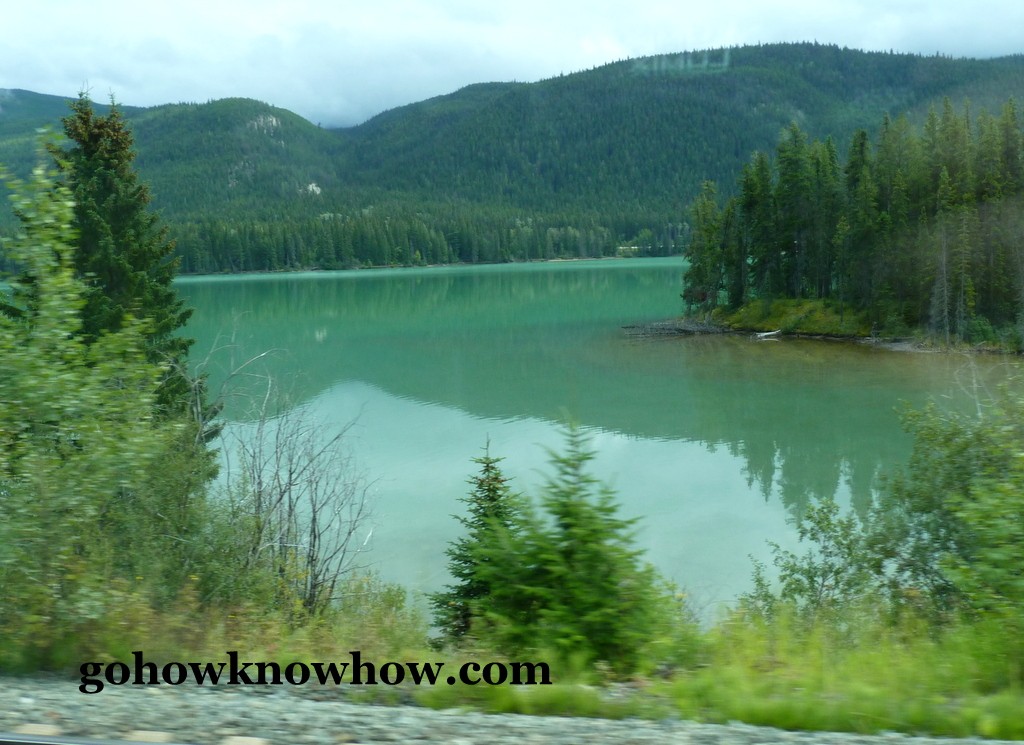 Water everywhere, in many shades.

Freight trains were our constant companions on the trip and the fact that their presence slowed us to a stop with considerable frequency was a good thing because it allowed me to really study the area through the large picture window in my cabin, or from the glass domed observation car. When I noticed that the stop did not frustrate me as it would have on any other trip I realized how time’s power to keep me moving onward had been neutralized. Remarkably, this occurred the very first day. 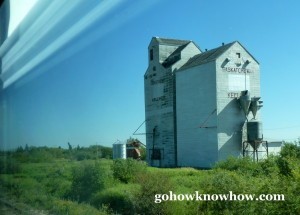 Meeting people is another of the great gifts of this kind of travel and the workers do their best to facilitate introductions, though rare was the traveler who wasn’t already primed to strike up a conversation at the first opportunity. After a day, the train felt like home, one man told me.

Fran and Jack Cress and Fran’s sister Janice were fellow Americans who were on the train for just 20 hours, traveling from Vancouver to Jasper on a week-long tour of western Canada by car and bus. Jack and I had attended the same air safety conference the week before our Sunday night departure, though we did not meet until we started talking in the lobby of the hotel as we waited for a cab to the train station.  All four of us had so much to talk about, we spend hours together. The following afternoon, we got off, I walked with them to their hotel before re-boarding my train but already I missed them. 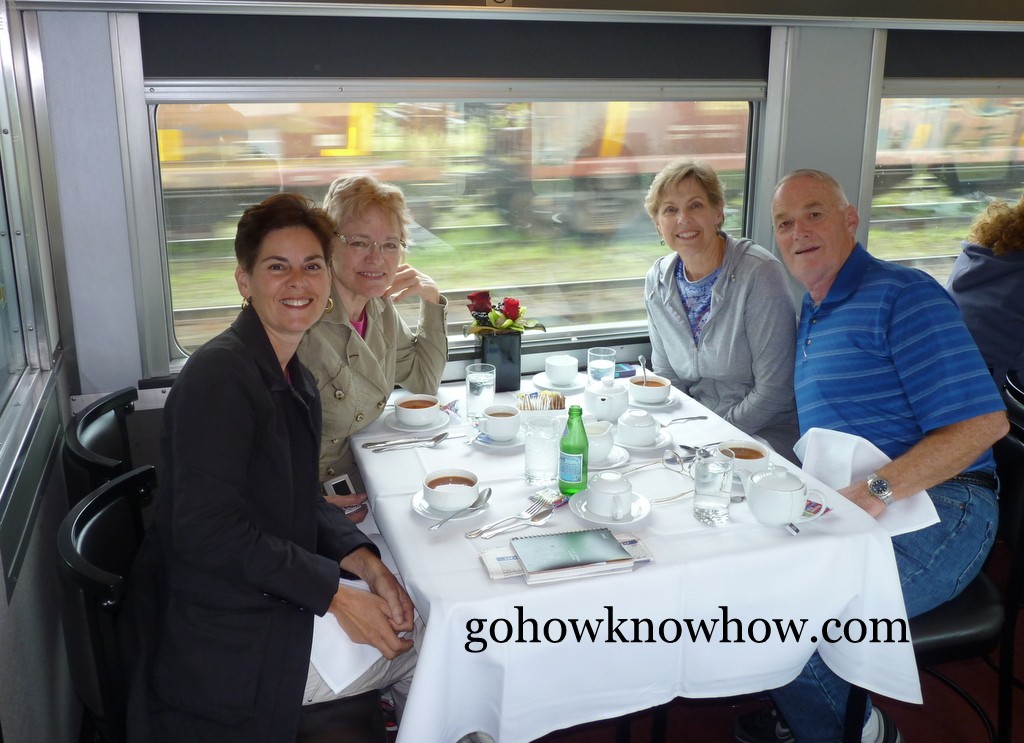 Lunch in the dining car with new friends

Dot Roy, of Grand Forks, British Columbia was accompanying her sister Joanne to Toronto. Separated for 45 years the two had the opportunity to get reacquainted with each other and also to meet others.

“Here you can sit and have some tea and a glass of wine and revel in mother nature and know our country,” Dot told me, saying that she’d had breakfast with many international travelers.  They may not have the same reason to be on the train, she said, “but they’re seeing the same things and they’re reveling in our Canadian beauty.” 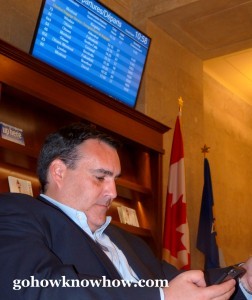 Stacey Detremble waits for his next train

Stacey Detremble, a high tech worker from Montreal wanted to see Canada so he took two weeks to travel from Montreal to Jasper then made the 12 hour ferry ride to the mining town of Prince Rupert before returning east. After 12 days on Via Rail Stacey pronounced the trip excellent, if the service a bit inconsistent.

That was the one comment I heard a lot from the travelers I met. While the train provided a steady stream of spectacular views, a reliable rocking and a comforting white noise of wheels on rails, the human encounters were a mixed bag.  The dining room wait staff could either be snappish or delightful. The social director either comic and playful like Walter on the Vancouver to Winnipeg run who delivered hilarious commentary in English and French, or straightforward to the point of boring. Bartenders could make you want to linger over another glass of wine or flee the lounge. 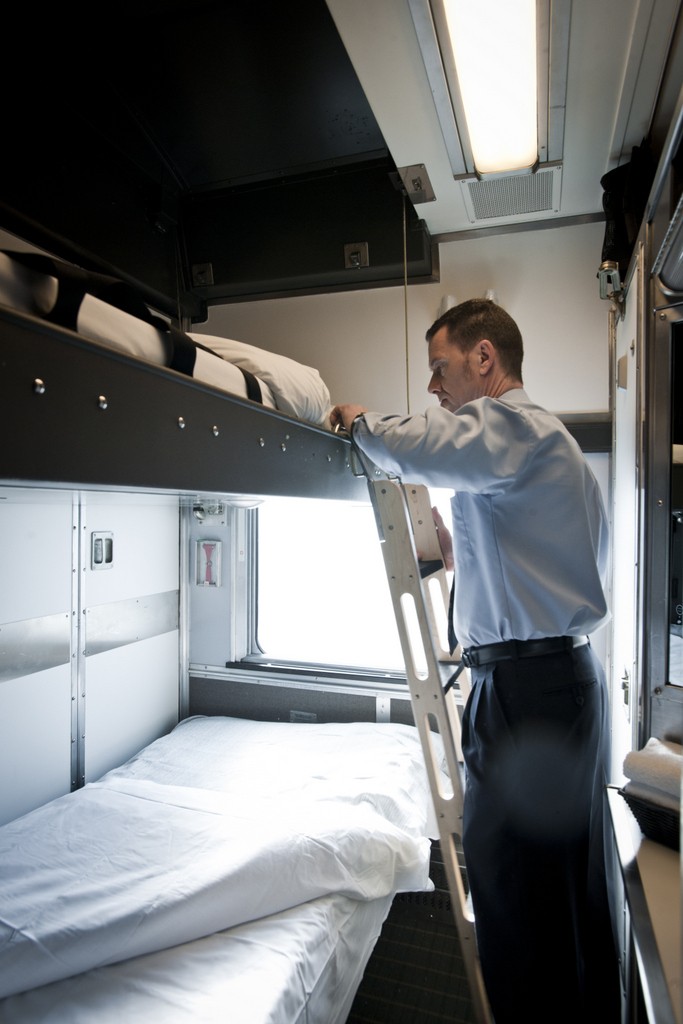 Turning one room into another. Photo courtesy VIA Rail

The room attendants were solicitious, including Solaine Laroche, the young woman who looked after me from Vancouver to Winnipeg. Solaine explained everything in great detail. My last time on an overnight sleeping car was in 1988 and I needed a refresher course in the fold-down bed and fold-up sink. The sitting-room-by-day, bedroom-by-night is nothing short of an engineering marvel if you ask me. 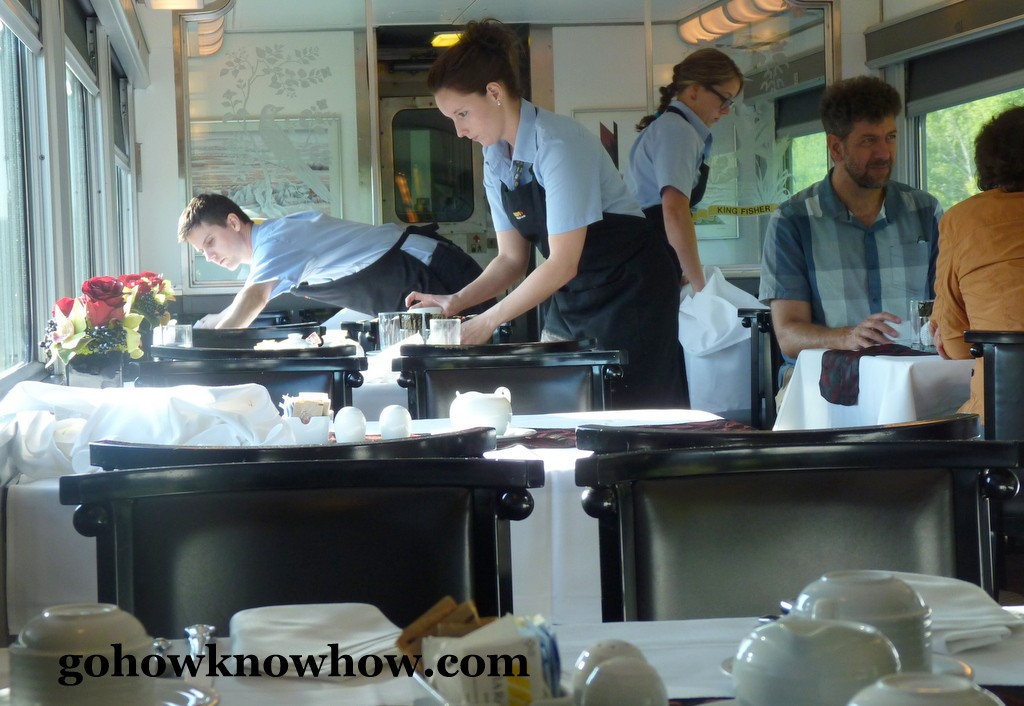 VIA Rail would benefit from guiding its workers to see the experience through the eyes of their customers. This is a challenge because while the traveler is on vacation from the pressures of time, the people who keep riders fed and entertained are slaves to the clock. They work every waking hour. When I awoke, Solaine was already raising beds, making order of the chaos of passengers bags and electronics and children’s coloring books that spilled out of sleeping areas and into the narrow corridors. 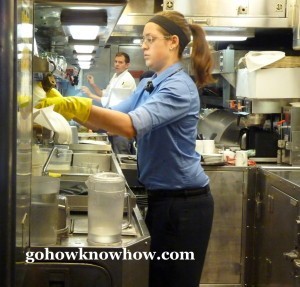 In a kitchen the size of two closets cooks in the train’s dining cars turn out delicious and imaginative prepared-to-order meals, each with fresh fruit and vegetables and a fish and vegetarian offering. The wait staff serve this yummy fare at an early and late seating for each of the three meals. The pantry person was responsible for washing all the dishes, pots and casseroles by hand after each serving. 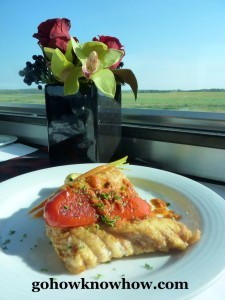 My meal on day three.

“It’s a hotel on wheels,”  the train’s service manager David Gobin, told me one night after dinner before the crew switched over in Winnipeg. Then he corrected himself, “It’s a cruise ship on wheels.”

It is also a mini society made up of people who are alike in some ways and very different in others. It means, according to Lynette, the service coordinator on my train, that “every trip is the same and every trip is different because of the people on board.”

If there’s one thing most travelers seem to share it is an affection for time on the rails.

When I started out, it would not have been possible for me to imagine feeling so relaxed about time. But somewhere along the way I realized this trip wasn’t about where I was going it was all about where the train could take me. 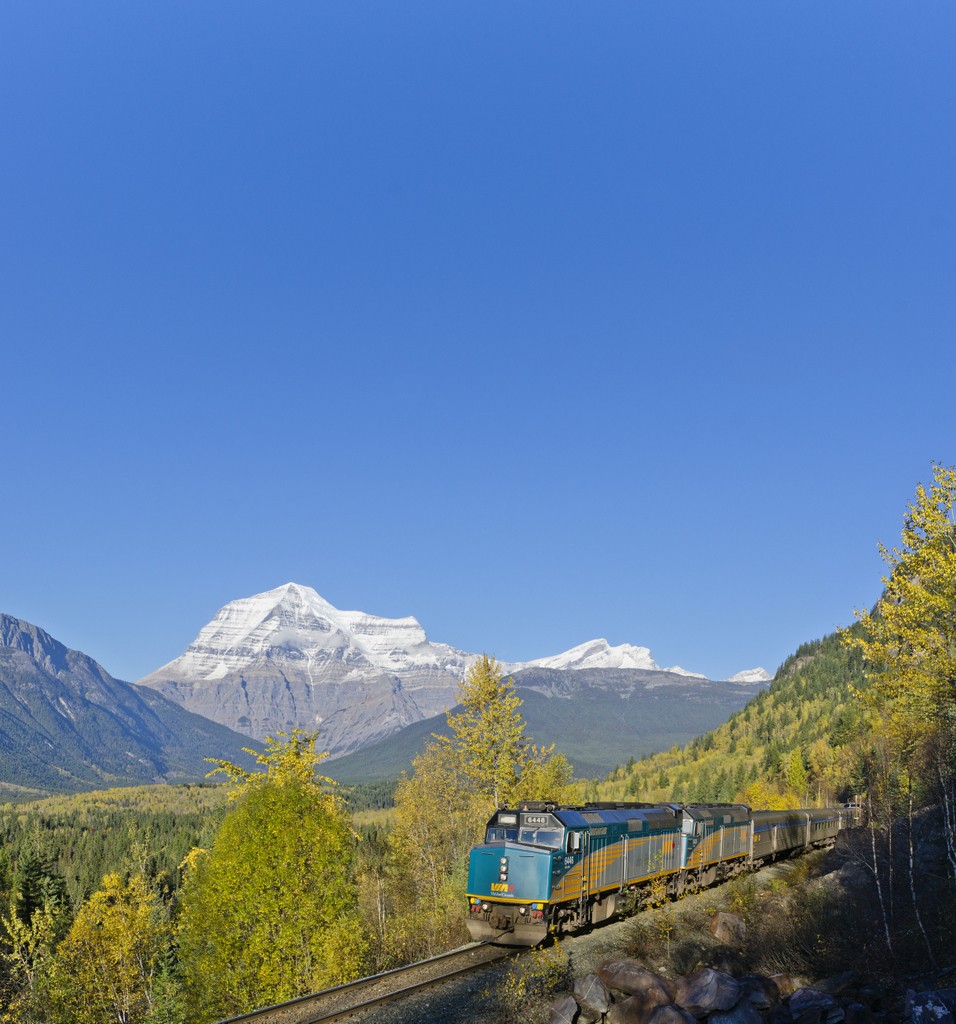 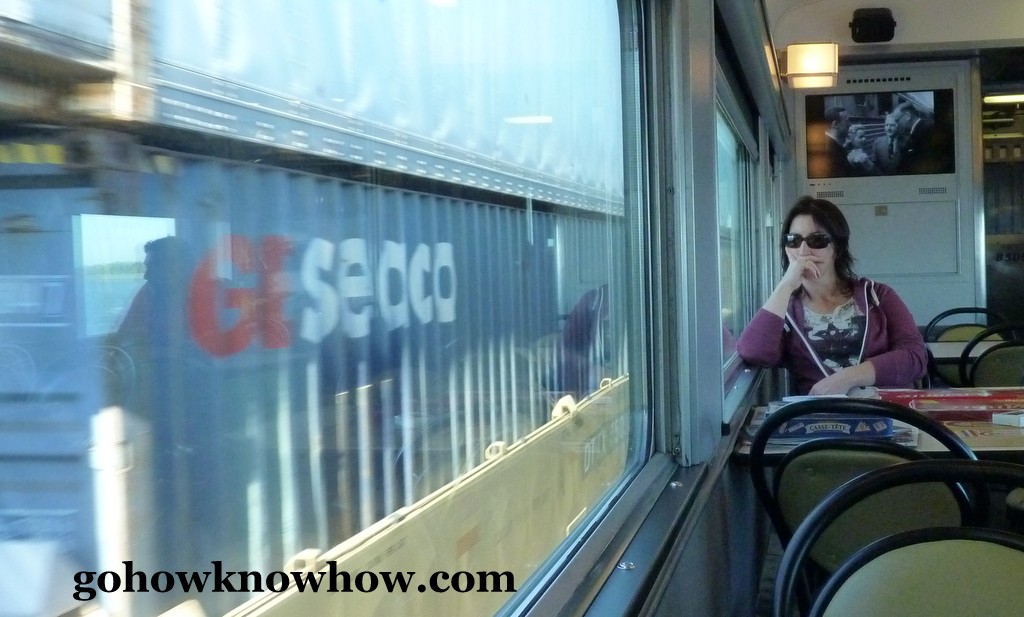 Freight trains up close and personal 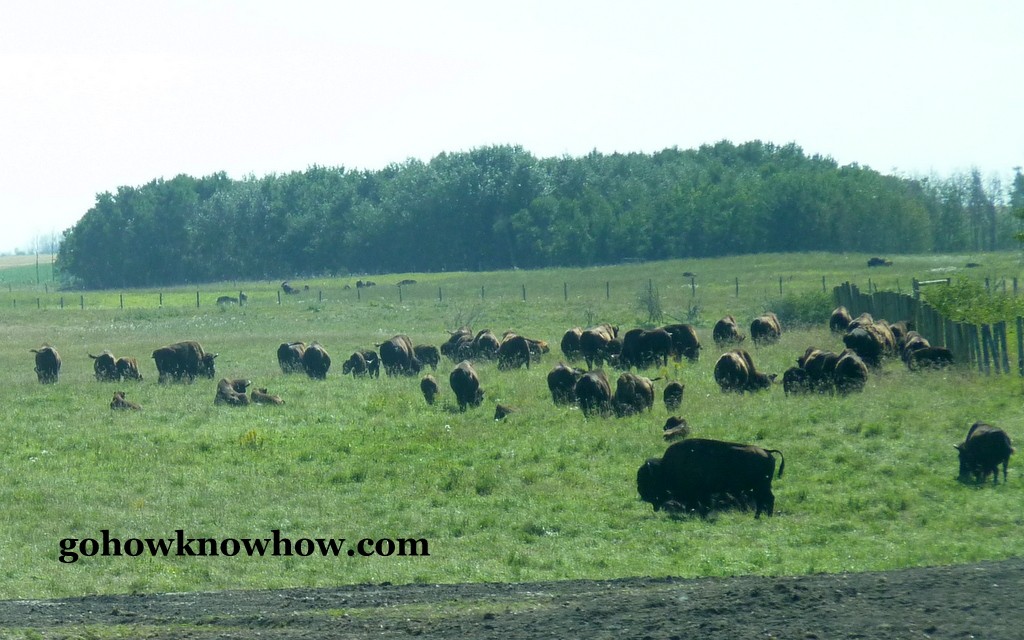 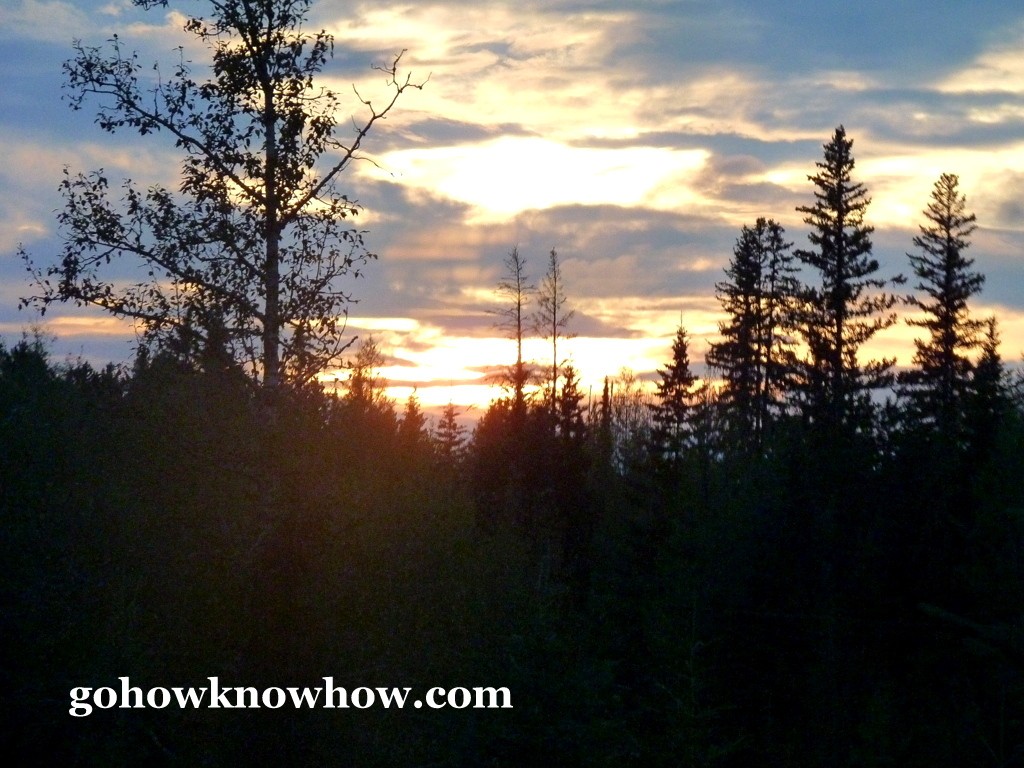