From United, Leggings-Clad Travelers Learn There’s No Such Thing as a Free Ride 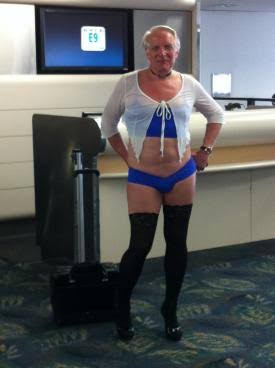 In light of today’s furor over leggings, who can forget the US Airways frequent flyer whose chosen travel attire was a jog bra, bikini panties, thigh-high black tights and a shrug? Nope, not making that up.

When I wrote a story about this for The New York Times, it followed several cases in which air travelers were denied boarding based on droopy drawers in one instance, and a too-short skirt in another.

The apparent disconnect between economy passengers getting the rough treatment and Mr. Lingerie being allowed to strut his stuff in business class had a number of people miffed and not without some justification.

Today, the miffed are one-hundredfold louder as social media amplifies the outrage, but the ire is ill-placed.

On Sunday, a woman and two teen-aged girls were told they could not board United Flight 215 from Denver to Minneapolis because they were wearing leggings.

Passengers nearby, hearing the exchange were surprised and the tweeting began. An adult traveling with a girl appearing to be about 10 years old, dropped a dress over her leggings in apparent apprehension that his daughter was going to be the next one banned from the flight.

He need not have worried. United’s policy about leggings applies to passengers traveling on the free travel passes issued to employees and as such the dress code is far more strict. Here are a few examples. No short shorts, no bare midriffs, no flip-flops, no dirty or torn garments and no provocative, see-through clothing.

Call them old-fashioned but the airlines including United have the quaint idea that if anyone’s clothing is going to be eyebrow-raising, smelly, immodest or otherwise nasty, best to leave it to the fare-paying passengers who, as the example cited above makes clear, are more than eager to provide the entertainment in the form of fashion faux pas.

John McDonald, a private communications consultant who has worked for several U.S. airlines, explains the rationale.

“The gist of the policy is they (airlines) don’t want employees looking like schlubs when paying passengers see them on the plane.”  His sentiments are echoed by a number of airline workers from many carriers who embrace the notion of dressing presentably when representing their employer.

What employees wear inside the plane is United’s business

A flight attendant at United remembers traveling on passes when the gate agent in Chicago told her husband to put some socks on with his loafers. The kids were thrilled when the rules relaxed enough so they could wear jeans.

In the United legging case, the employee wasn’t traveling with the party of three and the airline spokesman attributes the whole affair to an honest mistake either by the employee or the recipient of the employee’s passes. No one was disciplined and at this point, the airline is not reconsidering its rules for appropriate dress for people traveling on free passes Jonathan Guerin the airline’s spokesman said.

“It’s a tremendous privilege to have a benefit like this and to be able to follow a couple more guidelines to see the world for free and to get to where you need to be, that’s a great feeling,” Guerin said.

There’s a curious element missing in the legging snafu; where are the women whose attire is at the heart of the story? Unlike previous cyber-storms, the erstwhile-travelers in this one have not complained on twitter or made the rounds on the morning news programs.

Somewhere I suspect, there’s a United employee telling his three leggings-wearing friends that following the rules is included in the price of flying for free.

4 responses to “From United, Leggings-Clad Travelers Learn There’s No Such Thing as a Free Ride”