Weekend in the Palmyra Khaled al-Asaad Died to Protect 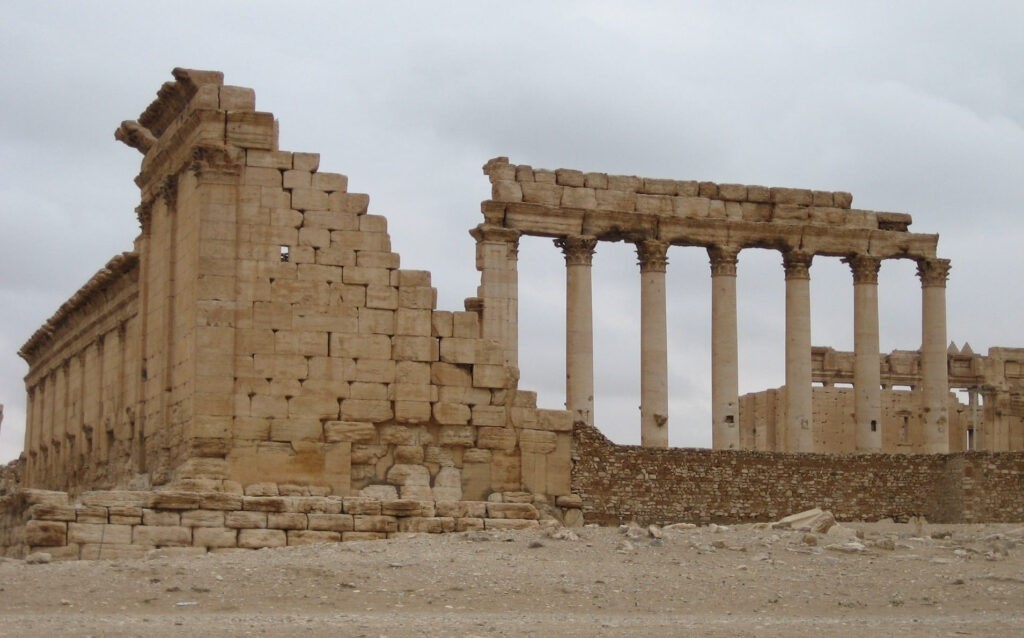 I hesitate to write this because Middle East politics is an unfathomable puzzle to me. I understand only the barest details of what is happening in Iraq and Syria. But hearing the news of the death of Khaled al-Asaad, the 83-year-old archeologist who was guardian and custodian of the historic sites in Palmyra (Tadmor) in Syria’s northwest breaks my heart.

In 2006, while doing a month-long Arabic immersion course in Damascus, I hopped a bus and spent a weekend there.  As luck would have it, it was the culmination of the Zenobia Festival with camel races by day and music and dancing by night. 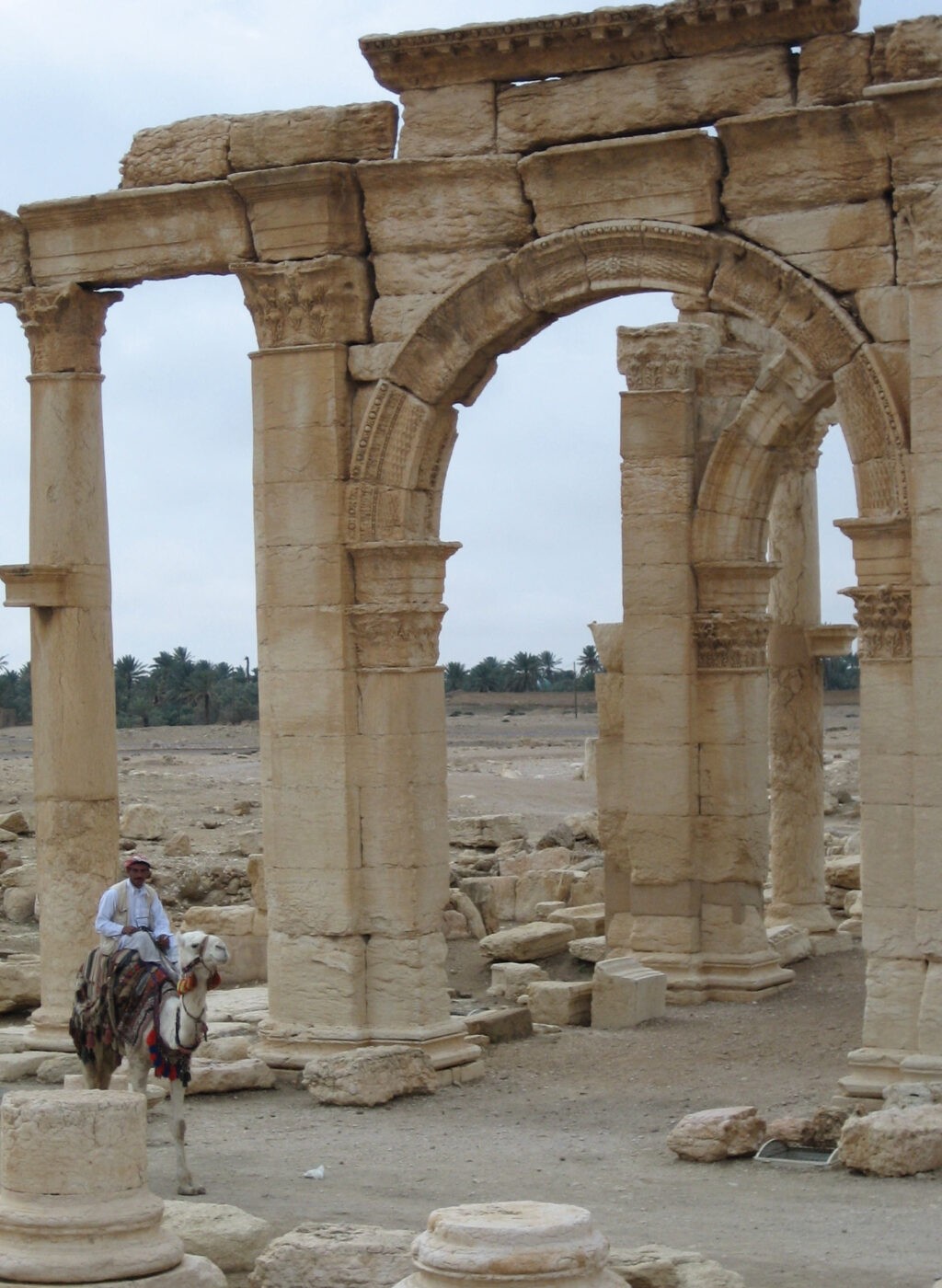 Tadmor is the name of the present city located next to the 2000-year old ruins of the city of Palmyra. Until 1927, the residents of Tadmor were actually living in the ruins, but I’m told the French relocated them and only one home remains, renovated for the use of visiting archeologists because discoveries are continually made here.

This remarkable place was Khaled al-Asaad’s “office”, a World Heritage site he oversaw until his retirement in 2005 when he passed it along to his sons to protect. In May of this year, Tadmor fell to ISIS and al-Asaad senior, feeling he was too old to be a threat, remained in the city. He was arrested and earlier this week beheaded in a public square. The rest is too grizzly to write about, but suffice to say, civilization lost a defender and if nothing changes soon, civilization will lose an important piece of its past.

What I once thought would be an enduring part of Syria seems to be coming apart stone by stone. So I am sharing my impressions of the place from this letter I sent home from Tadmor in October 2006.

My dear friends and family:

It is astonishing to see how big the ancient city of Palmyra was and how much still stands today. Like so much else in this country, Palmyra came under the influence of a variety of governments, Syrian, Roman, and Persian. My guide, Nejem was great at explaining how the various cultures influenced the design, decoration and layout of the buildings.

This was a great trip to take alone because it gave me the opportunity to meet many people and be spontaneous about my activities. Though I’d planned to go directly to the ruins on arrival, when I checked into my hotel I learned that a weeklong festival was wrapping up- culminating with camel races at the town track. This was definitely going to be a “locals only” event, the mayor and his wife were going to be there and a girl was to be crowned “Queen Zenobia”. I could not pass up an opportunity to see how the contemporary residents of Tadmor live and play. 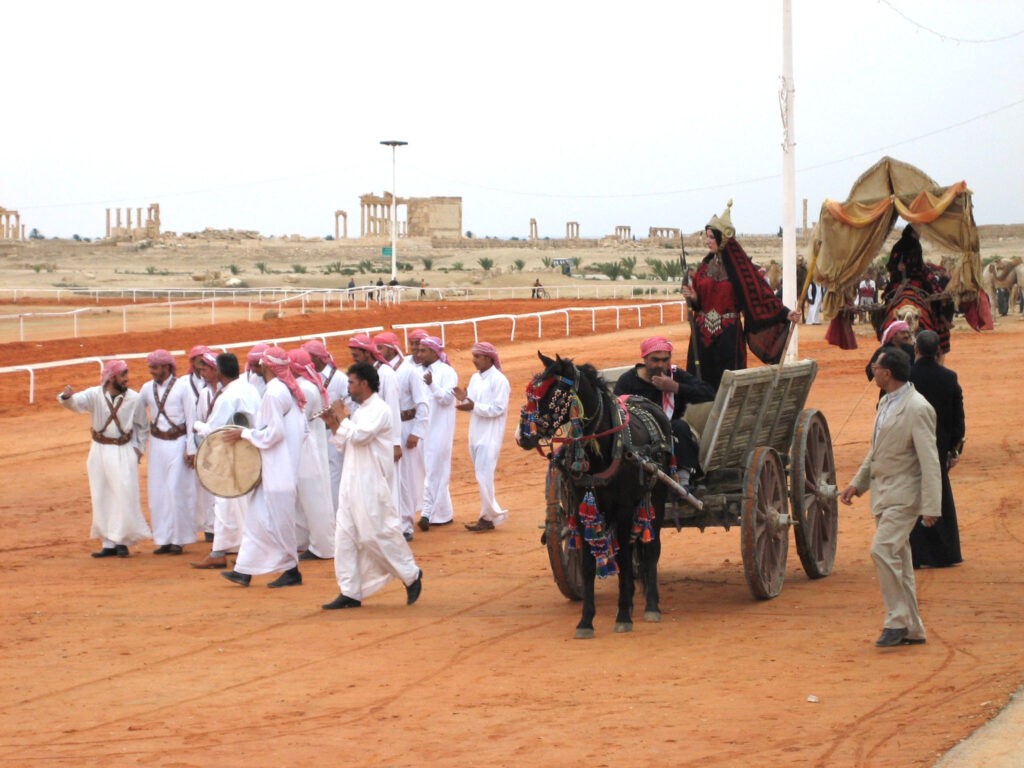 I shared a taxi to the track with a local businessman who had 12 camels entered in the race. After dropping him off, the driver showed me to the stands and left me in the custody of Mohammed, the musician who would be providing the day’s entertainment.

Mohammed was clearly A person of some renown. Everyone stopped by to say hello to him and by default to me. The rest of the seats in our row were reserved for the Bedouin entertainers, wearing white thobes, crisscrossing leather chest belts and red and white checked kefeyyas. I was thrilled. In town not more than an hour and I was already “with the band.” 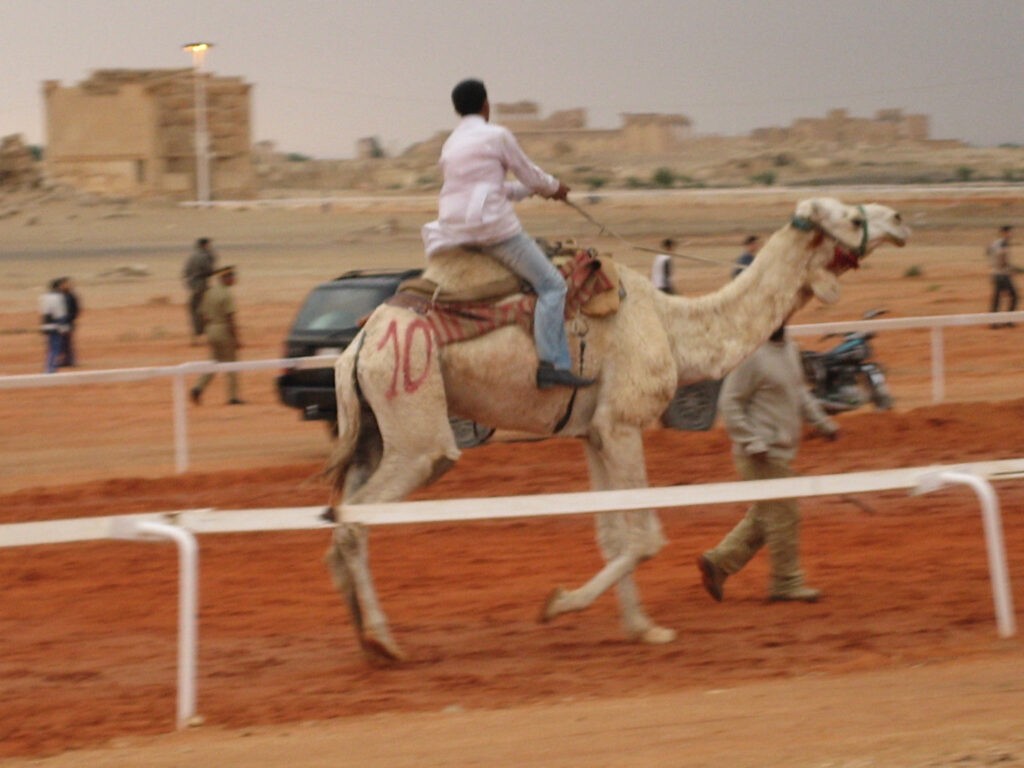 When the races began, I was surprised to see how fast the camels run, though they tend to track off-course. SUVs rode next to the animals, to keep them in line. When the first camel crossed the finish line, people ran out from the stands towards the track. Whether they were gathering around the animal, the rider or the owner I couldn’t tell. Meanwhile, the Bedouin performers were making a big fuss, stomping, clapping and chanting. 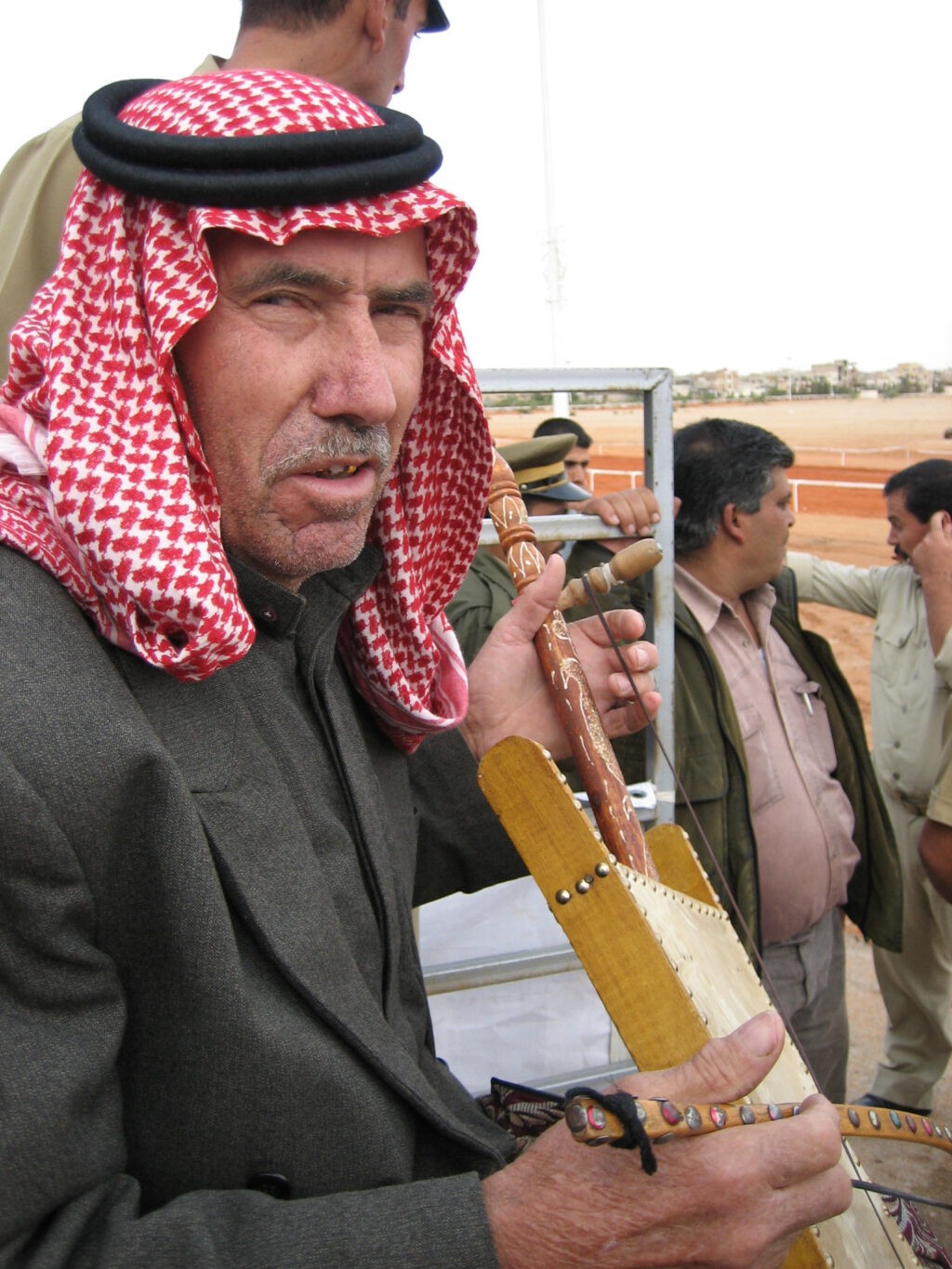 Then it was Mohammed’s turn to perform. I’d like to say he was great, but he was not. The skin that is the face of the instrument had absorbed the moisture in the air, affecting its ability to hold true to the notes. He’d been holding it over a propane fire to keep it dry, but that must not have been enough. I heard him when he was warming up, his voice and the sound he coaxed from a single string exactly alike in tone and texture. Both moved through an intricate and unexpected series of notes making a remarkable duet. I was wishing everyone had the opportunity to hear Mohammed at his best.

Rain forced the cancellation of the evening concert at the citadel so my taxi driver, Khaled Al Ayoubi, himself a musician, took me to a dinner/performance space in a Bedouin tent on the outskirts of town, where we could have tea and he would play the oud for me until the nightly show started. 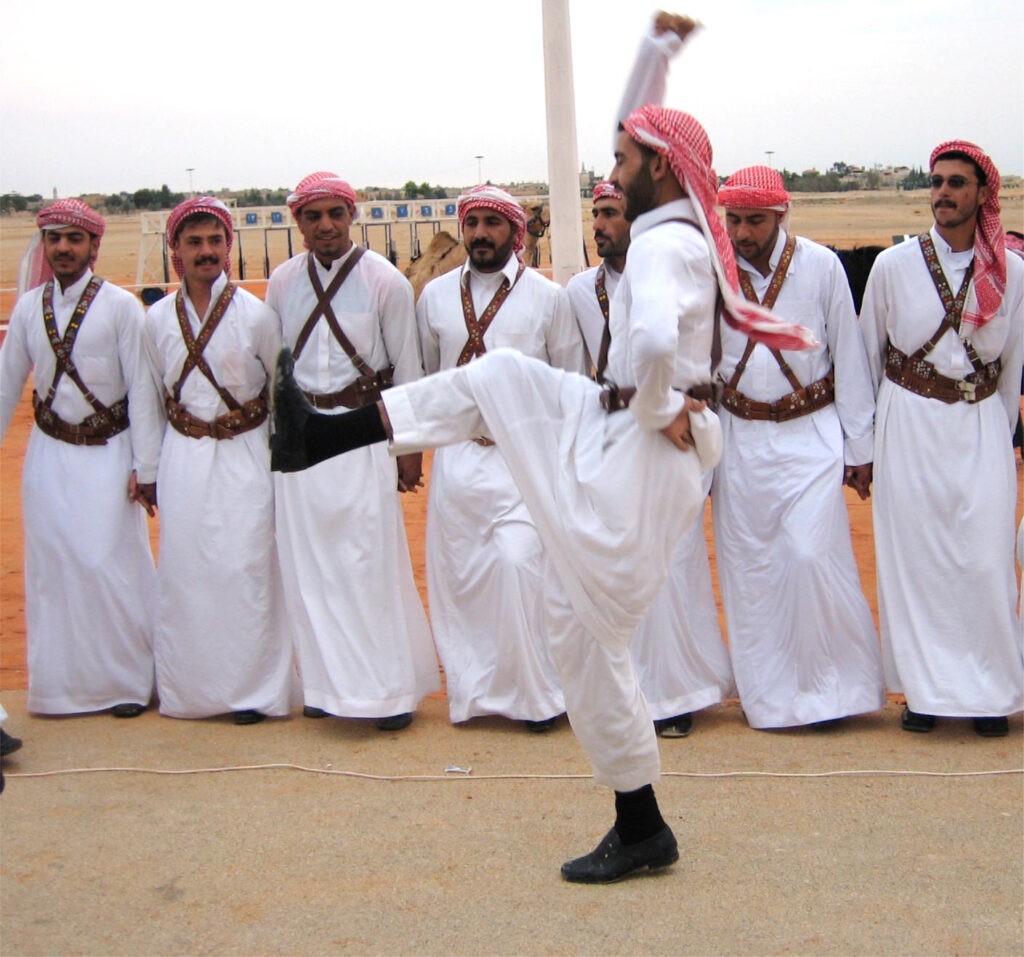 Some of the same dancers from the afternoon’s races performed. I enjoyed watching them just as much the second time. I have to wonder, however, about just what I’m listening to. That afternoon I’d been tapping my toe to a very catchy tune until I noticed the words, “Hezbollah is great, its leader Hassan Nasrallah is great, and isn’t Syrian president Bashir Assad great too for supporting Hezbollah against Israel?”

On Sunday, I caught a camel ride around the ruins with Imad, a man I’d met at the party the night before. He was a lovely guy and even better, spoke only Arabic. Here was my opportunity to speak the language without anyone else butting in trying to practice their English on me.

The truth is English seems to have become a universal language. For so long Americans didn’t speak other languages and from here it looks like the rest of the world has decided to accommodate us. Nevertheless, there’s something about experiencing a country through its words that’s particularly illuminating. 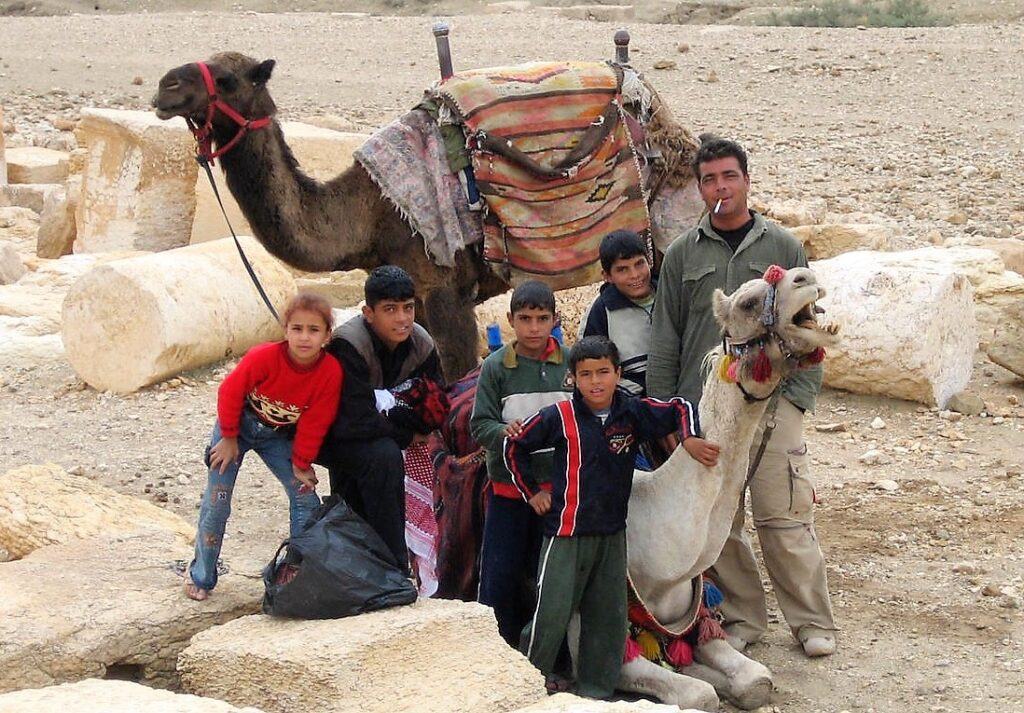 Imad and I had the ruins to ourselves for the morning, but as we were walking through the tombs, a pack of children appeared. My tourist site was their playground and they seemed happy to show me around.  We talked and they giggled about my Arabic and we parted. As I looked back at them, barefooted and dusty and full of fun, it was not difficult to imagine this place as it had been for 2000 years.

May God bring peace to this troubled land, and protect the legacy of the past for every generation of children.