Where’s the Fun in Flying – Turning Guff in to Guffaws 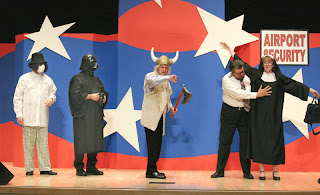 once said, “Laughter is the corrective force which prevents us from becoming cranks.”  Well Bergson has been dead for 71 years, meaning not once in his lifetime did he have to take off his shoes or toss his drink in the trash before boarding an airplane. So forgive my presumption but Henri would be right with me on my new campaign to puncture the ballooning hostility between passengers and airlines with a liberal and repeated application of sharp one-liners.

Not that I’m volunteering to do it myself, oh no! I’ve got some folks in mind to administer the remedy – the Washington, DC based comedy troupe The Capitol Steps and some others who have already stepped up and volunteered. They just haven’t realized it yet.

I knew right away that The Capitol Steps had what it takes when I saw them doing a sketch in which they  depicted a would-be airplane bomber at a TSA check point line asking a second terrorist,

“Do you think my new explosive rig – makes my butt look big? And the second terrorists replies; Honestly, your derriere – looks smokin’ in that underwear.

Yes, these men and women, many of whom came from straight-laced jobs on Capitol Hill  now proclaim in satire and song that Joe Biden’s televised napping during a speech by President Obama qualifies the Vice President to be an air traffic controller.

“Things have gotten funnier and funnier in aviation,” Capitol Steps founding member Elaina Newport told me on the phone on Monday.  Pointing out the comedy of errors that is politics is what they normally do. But air travel is right up there on the Steps’ comedic radar.

Elaina Newport of The Capitol Steps

“Aviation really does strike a chord because you encounter people with a lot of power over your day,” Elaina told me. At the same time, the Senate staffer turned comedienne and frequent flyer adds,  “I imagine passengers can be very annoying and it gets into a little bit of a cycle. You probably have the passenger annoying the gate agent and the gate agent taking it out on the next passenger. We’re probably on a downhill spiral.”

There was no loss of situational awareness at the Steps show when my sister Lee, her husband Hugo and I took our seats in the amphitheater at the Ronald Reagan Building last Saturday night. Soon we were off – flying high above the beltway into the not-so-friendly skies to the tune of Strangers in the Night

Strangers on the flight
Might cause a scare, well
It is just not right
They seized my hair gel
We could yell “jihad!”
Before the flight is through
Hear the lib’rals say
We can’t profile them
We’ll pass TSA
With just a smile then
As guards stop some nuns
And make them all get nude

As far as I’m concerned, Henri Bergson’s laughter-as-a-corrective-force has never been more needed than in commercial aviation today, where there’s an oversupply of cranky people and an undersupply of laughs.  So I asked Elaina if perhaps she would be willing to help out and improve the atmosphere.

“I’d be happy to sit on a commission,” she agreed right way, but she won’t come cheap. “For an upgrade, I would do it.” 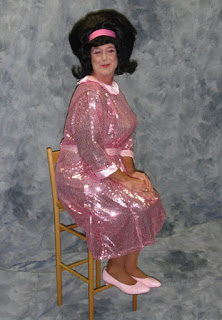 Well, even without the upgrade, the  Steps are making a valuable contribution and they’re not alone.  Southwest Airlines boss Gary Kelly likes to play the goof from time to time, especially at Halloween, a message that clearly filters down.

Ashley Dillon, a spokeswoman for Southwest says, “Customers have begun to see travel as a hassle because of all the rules and restrictions, and our employees have put the fun back in flying.” The airline encourages employees to lighten up. “If they tell a joke, it grabs the customer’s attention because it’s something unexpected,” she said.

Do ya think Southwest execs would laugh at the Steps’ parody of their recent flight when a big ole’ section of fuselage ripped open at cruise altitude? I sure did. Sung to the Danny Kaye

An affection for the lighter side does seem to run in the Southwest family, by the looks of it. I’m lovin’ Southwest Airlines employee David Holmes, the rappin’, rhymin’ flight attendant who deserves an upgrade from his jump seat for making his little corner of the airplane a better place. He’s turned the pre-flight briefing no one pays any attention to into something his passengers actually applaud.

Business class meals and lie flat beds should be offered up also to the pillow-tossing economy passengers who showed they know how to make the best of it on Lufthansa Flight 687.  With the assistance of a fun-loving flight attendant, en route from Tel Aviv to Frankfurt, they didn’t get bored during the lengthy trip, they got even, staging an impromptu pillow flight.

Without setting off a security alert, these people are my heroes for having launched a successful attack on the humorless cranks on all sides  who threaten this industry I love.  With a glass-is-half-full view of the skies, they see all the inanities; the lines, the charges, the delays and the whiners for what they truly are – a rich source of material to laugh about.