A Train Called the Lunatic Express

When I remember Kenya, I will think of trains. Not because I saw so many of them on my recent visit and not because I traveled in one. But the Kenya the world knows today would not exist except for a rail line that, during its design and construction, was considered such a bad idea it was dubbed the Lunatic Line.

Maybe it was crazy and maybe it was not. There are arguments on either side. All of which you can explore at Nairobi’s Railway Museum. 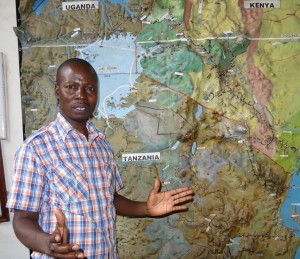 I was lucky enough to have an interview with the museum curator, Elias Randiga, an excellent storyteller who kept me spellbound as he explained how in the late 19th Century, Britain had little use for the great swath of East Africa populated by dozens of indigenous tribes.  The British Empire had its eyes on Uganda.

Building a rail line from Mombasa on the Indian Ocean west to Uganda was the only way to ease accessibility to Lake Victoria, the source of the Nile. 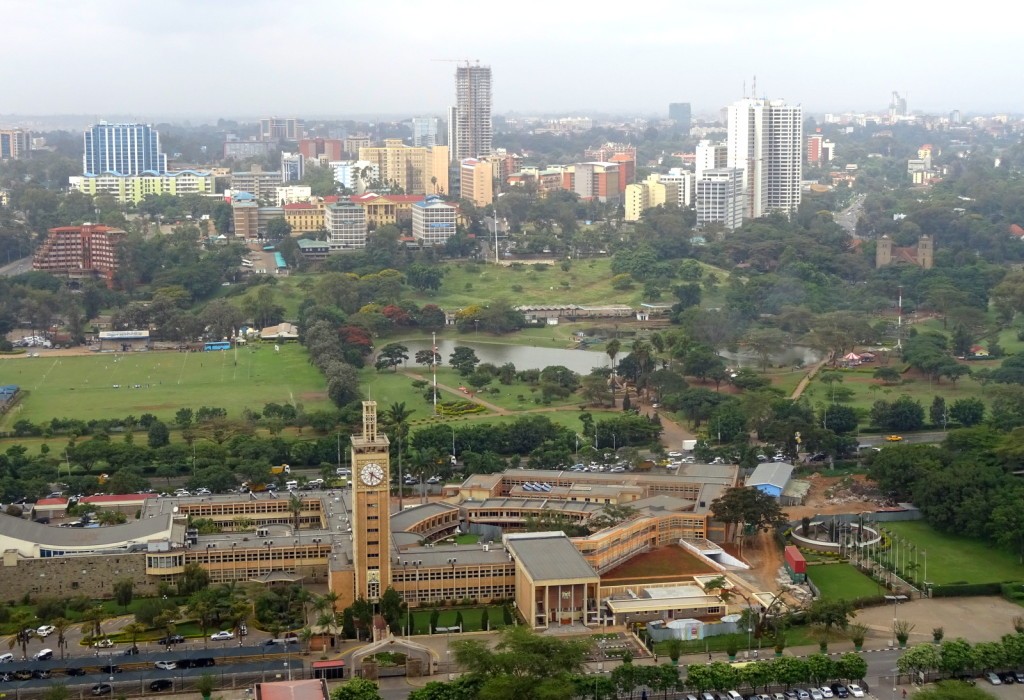 View of Nairobi’s modern skyline from the Kenyatta Conference Center

I arrived at the museum after viewing Kenya’s capital city from the top of the Kenyatta International Conference Center, at 344 feet, it is the city’s 4th highest building. A vast metropolis that is home to six million people spreads out below. So how surprised was I to see the photo showing that 116 years earlier Nairobi consisted of nothing more than the pitched tents of the construction workers and supply stores for the rail line. 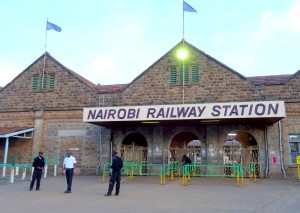 Colonization, urbanization and the dissolution of once-isolated cultures are attached to the construction of the railroad just as surely as coaches are hitched to powerful locomotives. So it is ironic that in contemporary Kenya, trains play such a small role.

A few commuter lines operate out of Nairobi’s threadbare station though its front plaza is choked with buses. And at night, people buy tickets for the 13 hour trip to Mombasa, now dubbed the Lunatic Express.

“There’s something antique and primitive,” about taking the train, Kyle Mero told me as he waited with his travel companion, Megan Anderson. 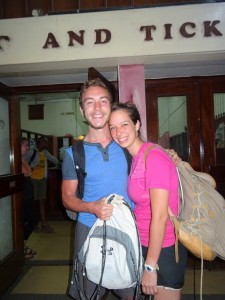 The two Americans from Michigan are currently working as teachers in Uganda. During their two week break, they opted to take the round trip journey between Nairobi and Mombasa and were ready for anything.

Still, the two were excited about the adventure ahead, what Mero referred to as “the romantic journey of the Kenyan landscape and imagining what we might see out the window.”

In a country well-known for wildlife tourism, Mero and Anderson may be getting a budget safari. The route takes them through a region famous for fierce creatures. 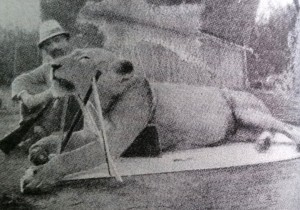 One of the man-eaters killed by the colonel near Tsavo

In his 1902 memoir, Man-Eaters of Tsavo, British rail engineer Col. J.T. Patterson described his many unsuccessful attempts to keep the lions from lunching on rail workers. Dozens of laborers had been pulled from their tents as they slept, before two of the lions were shot. In a morbid postscript, Patterson later found a lion’s den and human bones. It was not a leap to assume they were the remains of the missing workers.

Farther up the line, another audacious lion entered a rail car during the night and grabbed the Superintendent of Police Charles Ryall as he slept in the train berth. The lion jumped out the window, officer Ryall still clamped in its jaws.

Elias Randiga took me through the coach car, pointing out how the lion entered, how the door rolled closed behind the big cat, locking it inside and on top of another man sleeping on the carriage floor. Ryall’s blood still stains the cracked window, making this the most ghastly of the museum’s exhibitions.

The difficulty of building the train, challenging terrain, predatory wildlife, opposition from local inhabitants, harsh living conditions, these were such formidable obstacles even more than a century later the idea still seems crazy. 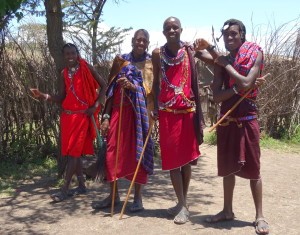 The grandfathers of today’s Maasi opposed building the railway

And yet, had the idea not powered its way through all resistance, Kenya would likely not exist as population of diverse tribes under one federal government into which is layered descendants of the Indians and British whose arrival created and then exploited the region’s new accessibility.

After my visit to the rail museum, I downloaded Patterson’s book and consumed it with the appetite of one his hungry lions.

Later, during game drives in the country’s magnificent parks, in conversations with people who still live in close proximity to Kenya’s untamed wildlife, and even among the city dwellers in bustling Nairobi with its overtaxed roads and overloaded buses, I would remember Patterson’s story.

Now I think the craziest thing about Kenya’s link to the rails is that anyone ever thought they could predict where the track would lead once the wheels of progress were put into motion,