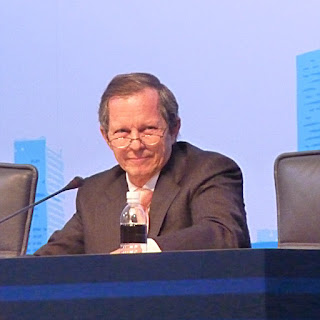 State of the industry speeches can be boring affairs. Even the best don’t garner adjectives like entertaining. But this morning’s presentation by Giovanni Bisignani, to an international gathering of airline executives was described just that way and that’s one reason why the airline industry is gonna miss the most colorful  director general the International Air Transport Association has ever had when he steps down at the end of June.
Reporters will miss him too, the man is a sound bite machine. Enemies are “leeches”, a European Union proposal is a “cash grab”. You can’t make these quotes up! Neither can you doubt the man’s dedication to commercial aviation. 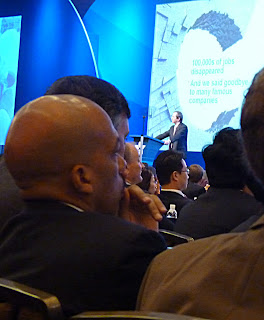 Sure, Bisignani’s proud of what he’s accomplished in the 10 years he’s been in charge at IATA. Presiding over the global conversion from paper to electronic tickets, a 42% decrease in airplane accidents since 2000, the creation of a widely accepted program that quantifies safety at individual airlines, and a plan to share among carriers ideas for more effective fuel management that Bisignani claims has saved the industry $19 billion over the past six years.
The speech wasn’t all boasting and painting a picture of rainbows and unicorns for airlines. (Airlines have seen very few rainbows in the past decade.) When Bisignani turns IATA over to its new chief, Tony Tyler, there will still plenty of work to do.
Much of that work will be going in here in Asia, which makes it more significant that the new chief is now at the helm of Cathay Pacific.
Bisignani spends a lot of time reminding people that three of the five largest airlines in the world are Asian.  (Air China, Singapore Airlines, Cathay Pacific) and that the forecast is that in the next two years Asia will produce 360 million more travelers, 210 million of them from China alone.
In wrapping up his candid, pointed and yes, entertaining speech this morning, Bisignani listed the things he got going, but was unable to see concluded:

And unable to see spiked:

So Bisignani’s left some work for Tyler. And the Cathay boss would be wise to take a page from the Bisignani’s how-to guide and attack the job with the same panache.