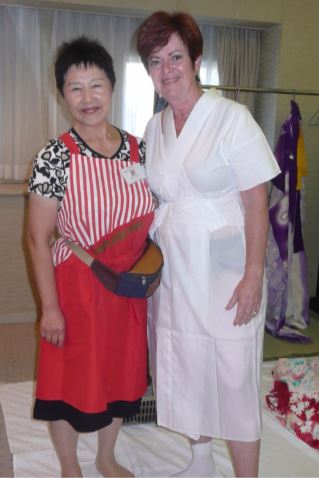 Sure, I anticipated it might be complicated to put on a Japanese kimono. Then, when a group of women, spouses or companions of participants in an international aviation conference were invited by the Sapporo Tourist Office to do it, I realized it IS complicated. First, we were each given two helpers and shown to racks of colorful silks. Spellbound, we thought we’d dig right in and wrap ourselves up. Wrong. A lot gets put on before the fun begins. I started with a sort of knee-length muslin slip, which has short sleeves, a V-neck collar and a tight sash around the waist. Then another patterned collar gets tied around the body. Only after we were sheathed in these undergarments could we get our hands on those gorgeous floral print robes. 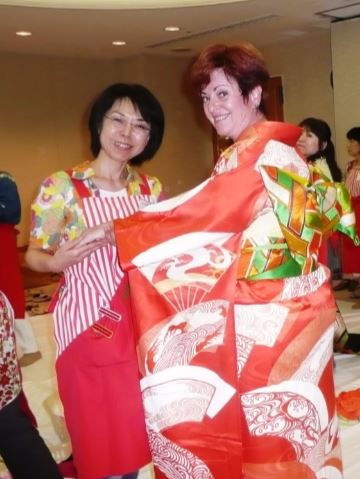 I had another surprise when it came time for the famous obi, the yards-long contrasting wide band of silk, that gets wrapped around the waist. Turns out that’s a multi-step process too. There’s a long stretch of fabric that goes under the obi and a length of colorful silk cord that gets tied over it. The Japanese volunteers tied my obi into an enormous butterfly in the back. Finally, I slipped on some little white socks and a pair of wooden sandals that were at least 2 sizes smaller than my feet. In half an hour, a room of Western jeans-and-windbreaker-clad women had been transformed into something like a garden in full bloom. We tiptoed through the hotel lobby, awkwardly at first, but the outfits were having an effect. We were giggling like Japanese schoolgirls. Passing the conventioneers in the meeting rooms, we sent them the kind of flirtatious looks one would only attempt dressed this way. That’s when I realized, my ensemble was ancient, binding and complicated. At the same time, it felt like the most powerful outfit a woman can wear. 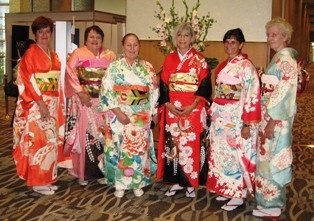