Take a look at this video of American Airlines Flight 383 which was headed from Chicago to Miami on Friday afternoon when an uncontained engine failure prompted the crew to abort the takeoff.

Jose Castillo, using the twitter handle @Kryptonlogic posted the video on Twitter reporting that his father was on the plane which “exploded” just before takeoff around 2:30. One hundred and seventy passengers and crew were on the Boeing 767, when the General Electric CF6 engine on the right wing erupted into flames.

The first passengers to evacuate the wide-body started taking videos, recording thick black smoke pouring from the aircraft that only minutes before they had been sitting in, anticipating nothing more dramatic than the movie on their inflight entertainment systems.

Twenty travelers and one flight attendant were injured, according to American Airlines. They were taken to area hospitals for treatment of injuries sustained during the emergency evacuation down the airplanes inflatable slides. 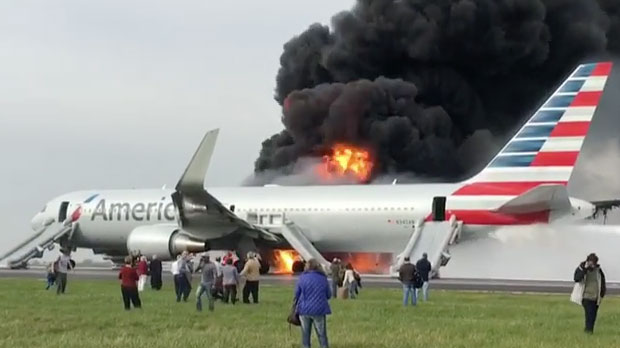 That so few people were hurt, and no one killed is remarkable to be sure. It is the result of decades of improvements in the safety of cabin interiors.  Castillo’s video is proof of how smoke and flame retarding fabrics and sturdier seats have made formerly catastrophic events, survivable.

Credit must go to the flight attendants who work in increasingly crowded airplanes, under difficult circumstances. Over the years their service jobs have morphed into sales jobs as their airlines expect them to shill food, drinks, credit cards and duty free products. Airlines see their flight crews as generators of additional revenue but their most important job is not keeping the customers spending but keeping them alive.

When the unexpected happens and even the emergency plans require innovation, air travelers have a lot to be thankful for. And flight attendants should be given  their due.