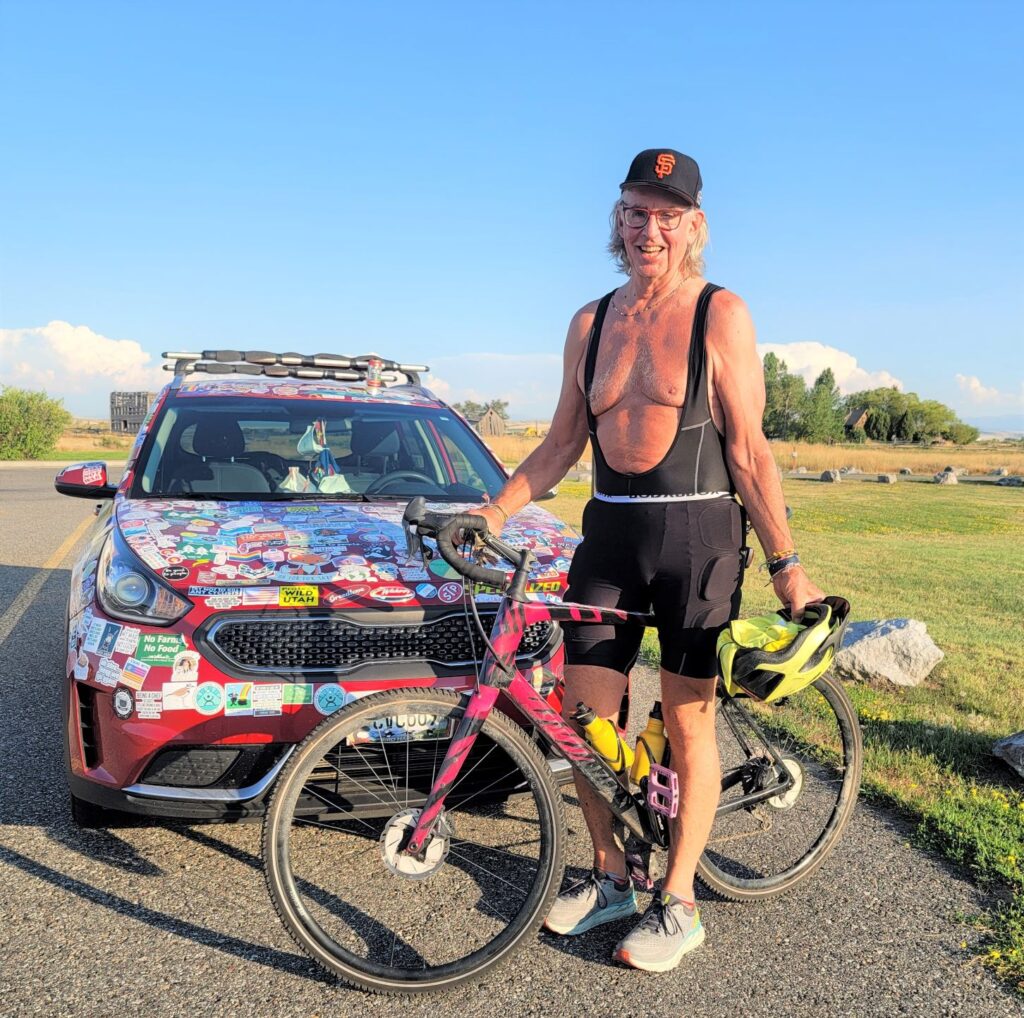 If you can tell something about a person by the car they drive, then spend a minute and you’ll discover, Tom Hinz, of Three Forks, Montana is a man with an interest in social justice, the environment, humor and bicycle riding.

I was finishing up my own ride on the Headwaters Trail near Three Forks when Hinz pulled next to my campervan at the trailhead and started unloading his bike. Music by the Beatles was streaming from the open windows of his red sedan, but that wasn’t what made me turn off the ignition, grab my phone and get out to take a closer look. 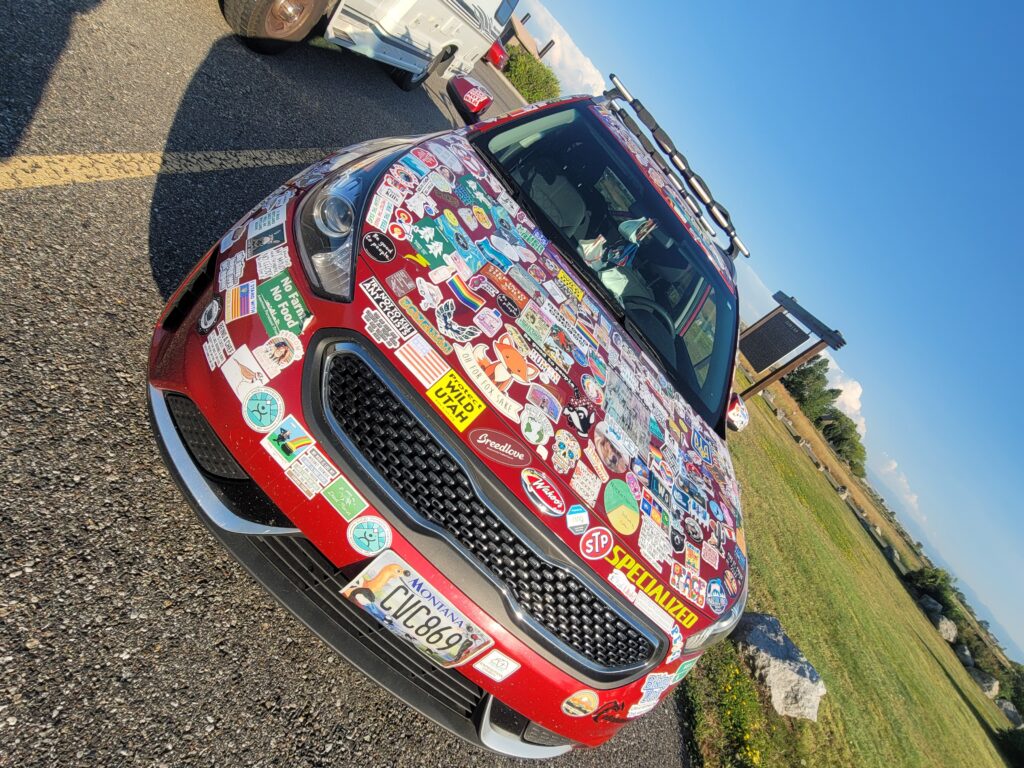 Hundreds of stickers were plastered all over the car.  Big and small, simple images or provocative statements, photos, political cartoons, airline logos and flags. Together it was an irresistible visual treat with a large helping of humor.

“I wish you would,” Hinz replied.

Hinz’s freedom-of-speech-mobile has its roots in Covid 19. During the pandemic, many people found themselves taking a deep dive into one hobby or another. Hinz, who was recently widowed, was inspired to share his thoughts on a variety of issues by plastering them on his car.

An avid cyclist, a number of his stickers proclaim the benefits of taking to two wheels. One styled like a cold war-era poster implores the reader with this argument; “When you drive a car, you drive with Putin! Ride your bicycle today.”  Another explains that Hinz, a father of five, is a “Biking Dad – Like a normal Dad only way cooler.” 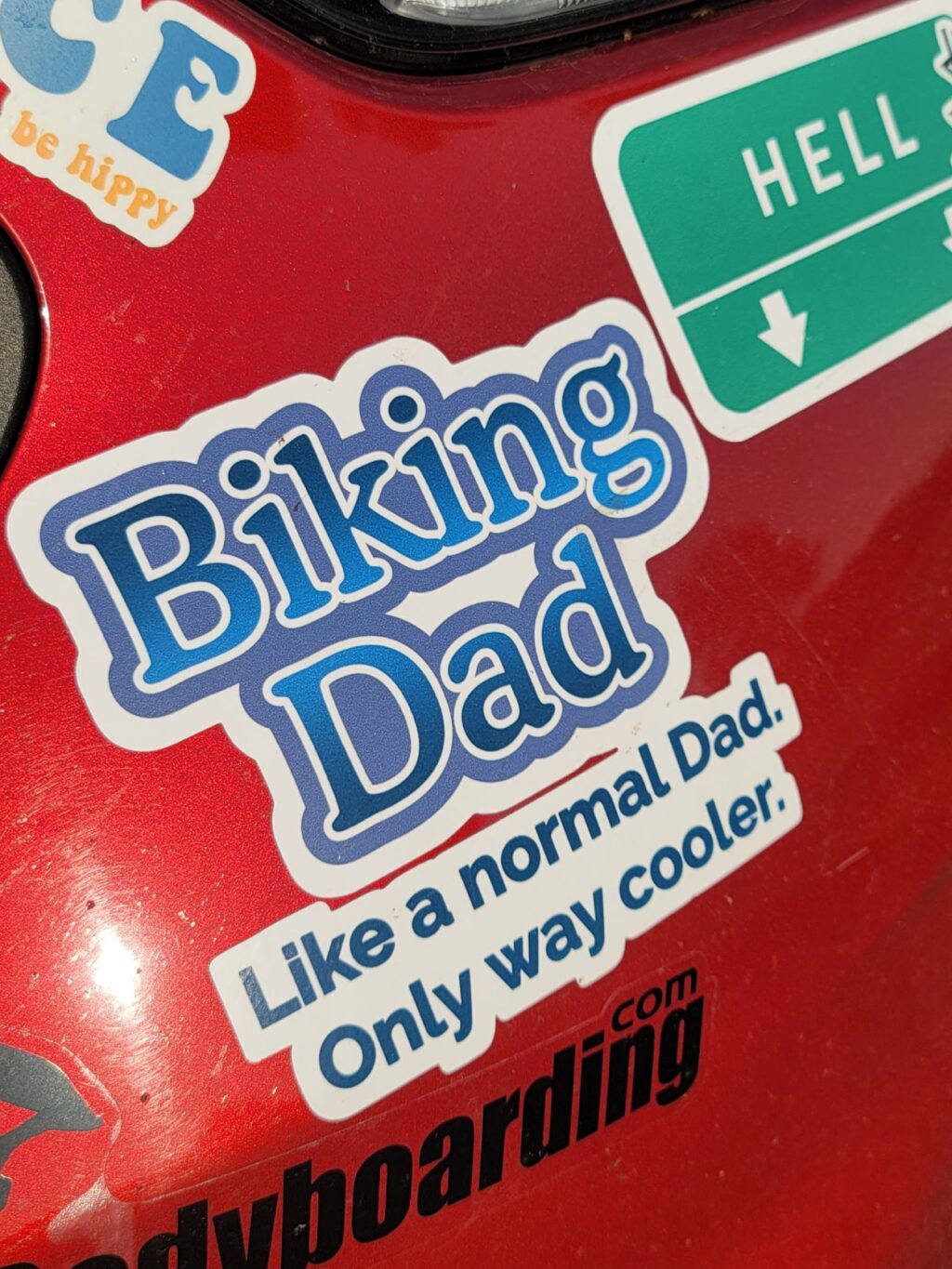 Many people who start collections will soon find friends and family making contributions. This has happened to Tom. He has stickers touting beer and coffee companies. There’s a mystifying cartoon of a uterus wearing boxing gloves. Thomas Jefferson is there, Frida Kahlo is too.

Among the stickers Tom believes to be sneakily subversive is based on characters from the sixties classic series, “Dick & Jane”. In the image, a police officer is yelling at the tots. They’ve obviously done something wrong and so they are running away from home with their possessions over their shoulders hobo-style.  The caption reads, “Let’s run away from our problems.”  Note: the book is in the “Life Skills series.” 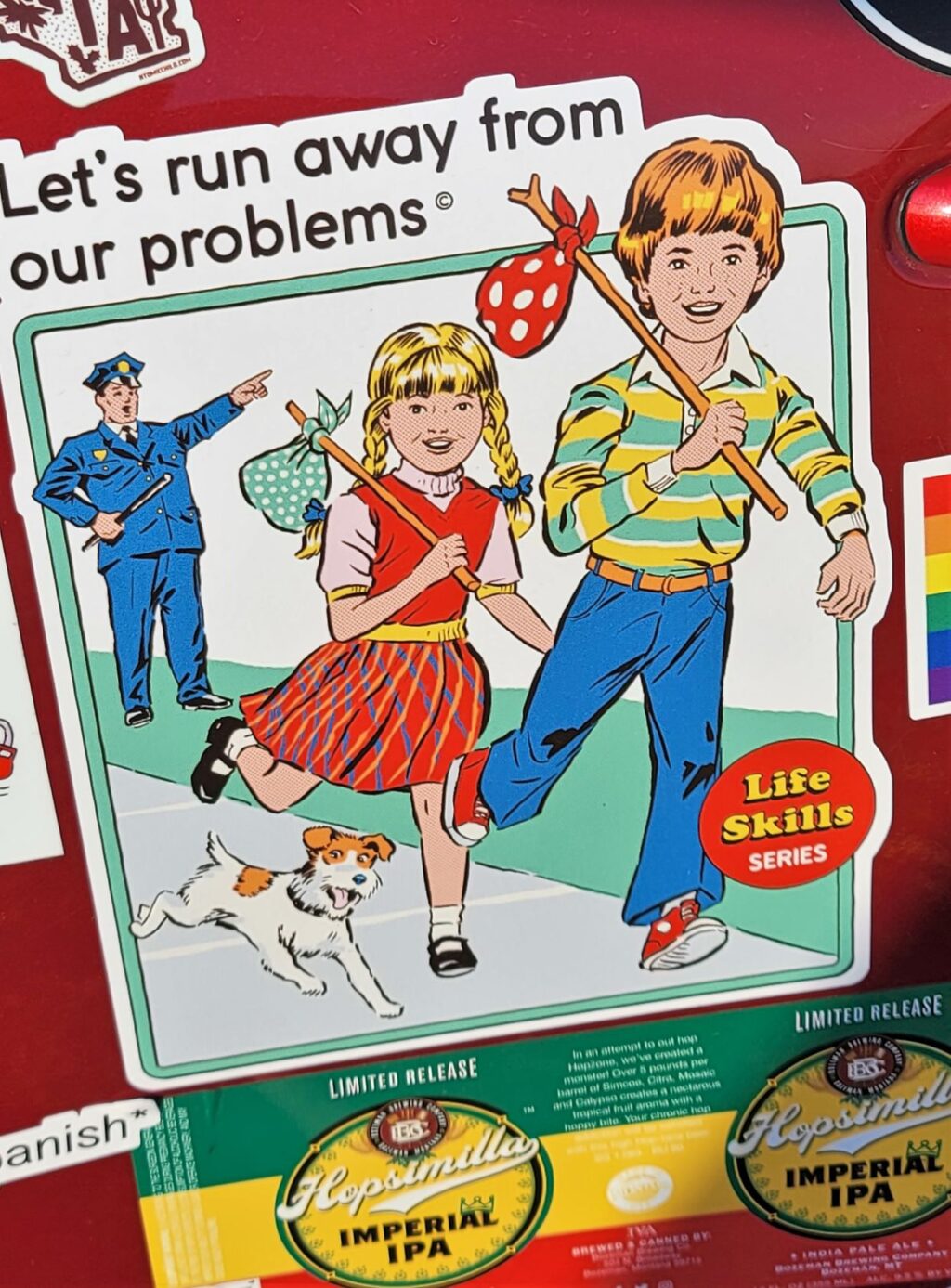 This, Hinz tells me, is what’s going on in America today. Hinz is not joking but he’s not angry either, more like exasperated. Humor, satiric and sophomoric seems to be one way he deals with that.

My encounter with Hinz on Tuesday reminded me of my meeting just days earlier with Linda and Mathew Irwin of Rapid City, South Dakota. We shared a table at the very crowded park cafeteria at Mount Rushmore National Memorial.

The Irwins were working at First Amendment Plaza, an area on the federal property where people are allowed to share with visitors, their views on many subjects. Mathew is the Pastor of outreach and evangelism with the Real Life Church of the Nazarene and the couple was at the park evangelizing, a mandate for Christians. 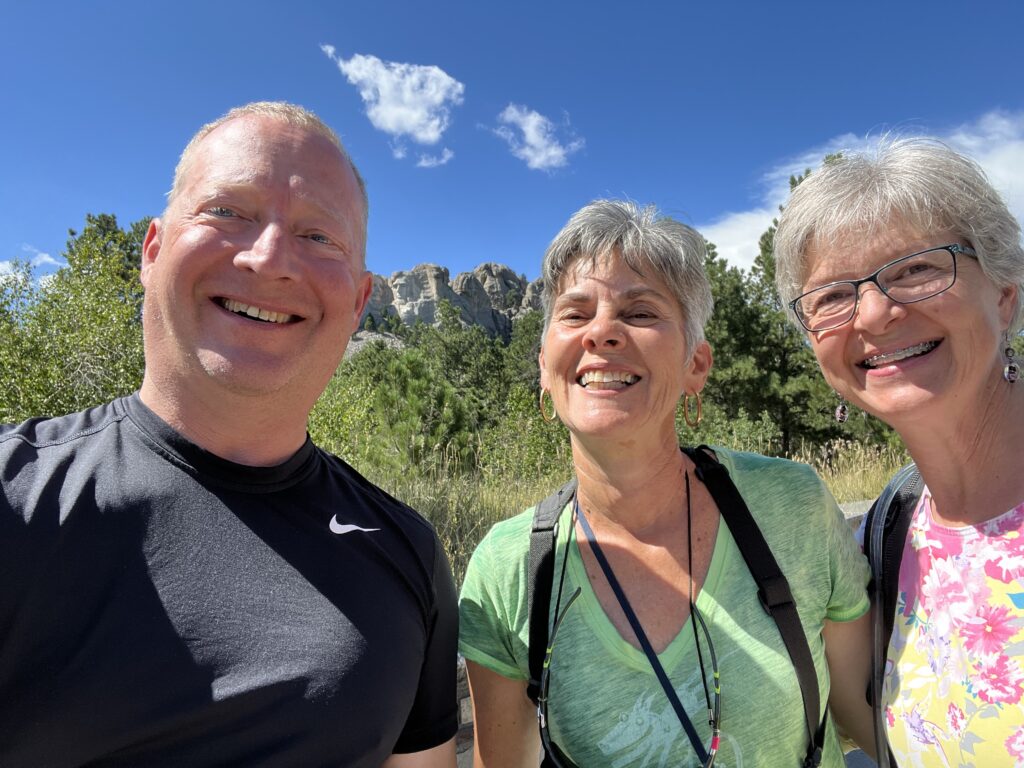 Over lunch in this, the reddest of states, we talked about the many things that divide Americans. And while we did not discuss them, I suspect there are subjects on which the Irwins and I would disagree. But we were in full accord in believing that people form opinions based on their experiences or lack of it, throughout their lives. Key to understanding how other people think is to talk less and listen more.  We take a giant step away from the precipice on which we stand as a nation when we get out of our own head spaces and ask why others believe as they do.

Which coincidentally, was the message on Hinz’s car that he was most eager to have me read. 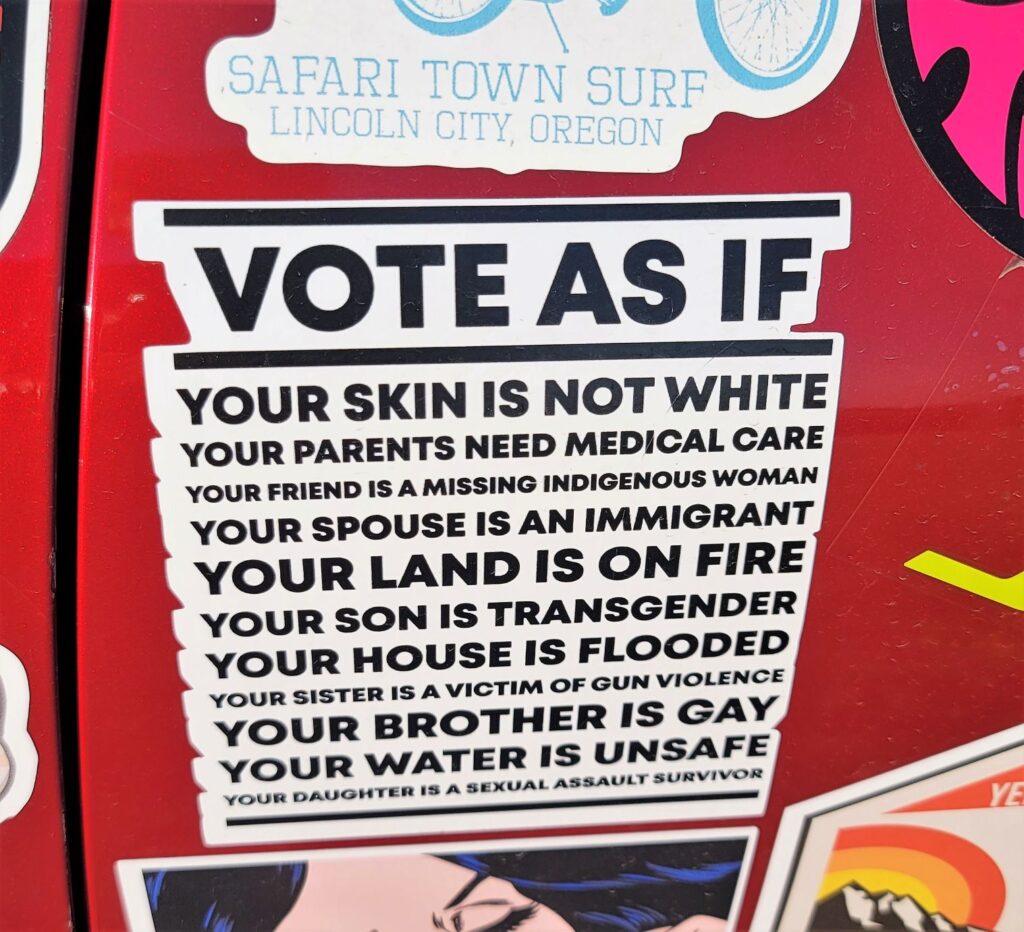 Freedom of speech can be found in all corners of America. Listening is its ever-present, but too often unappreciated companion. 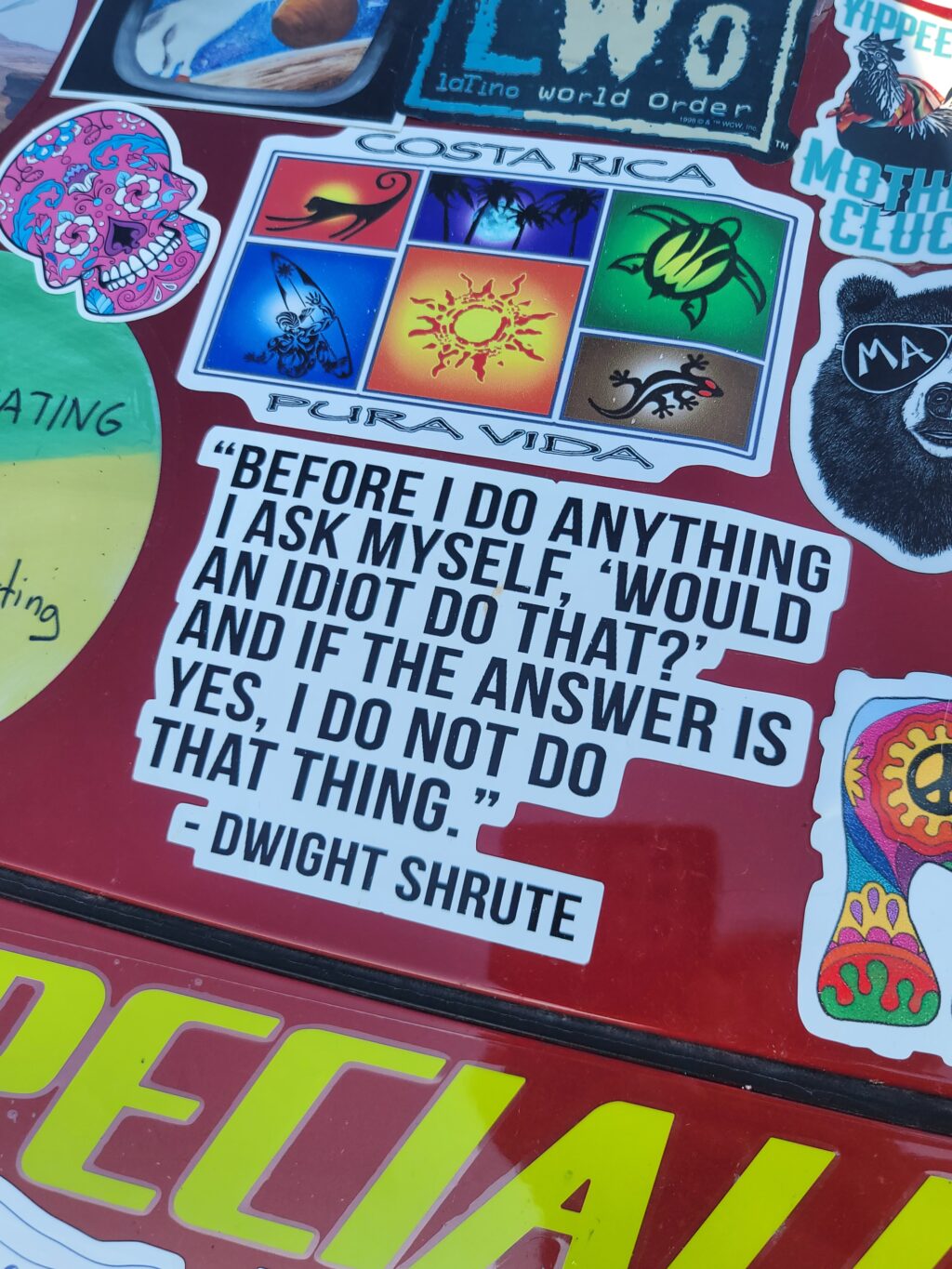 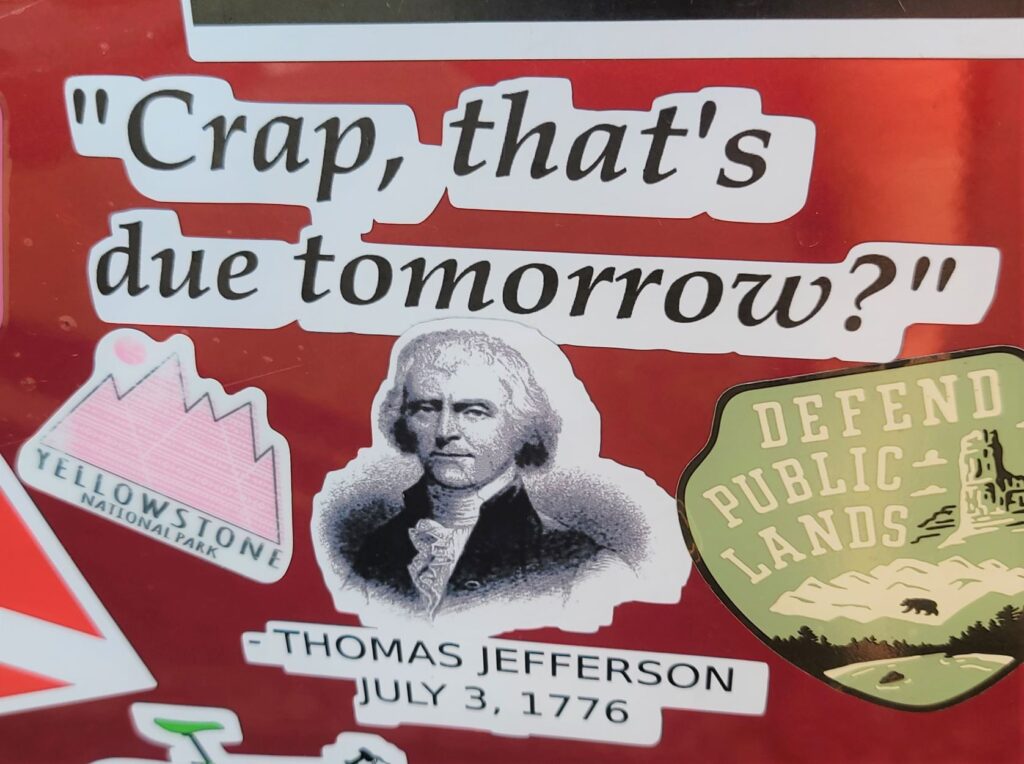 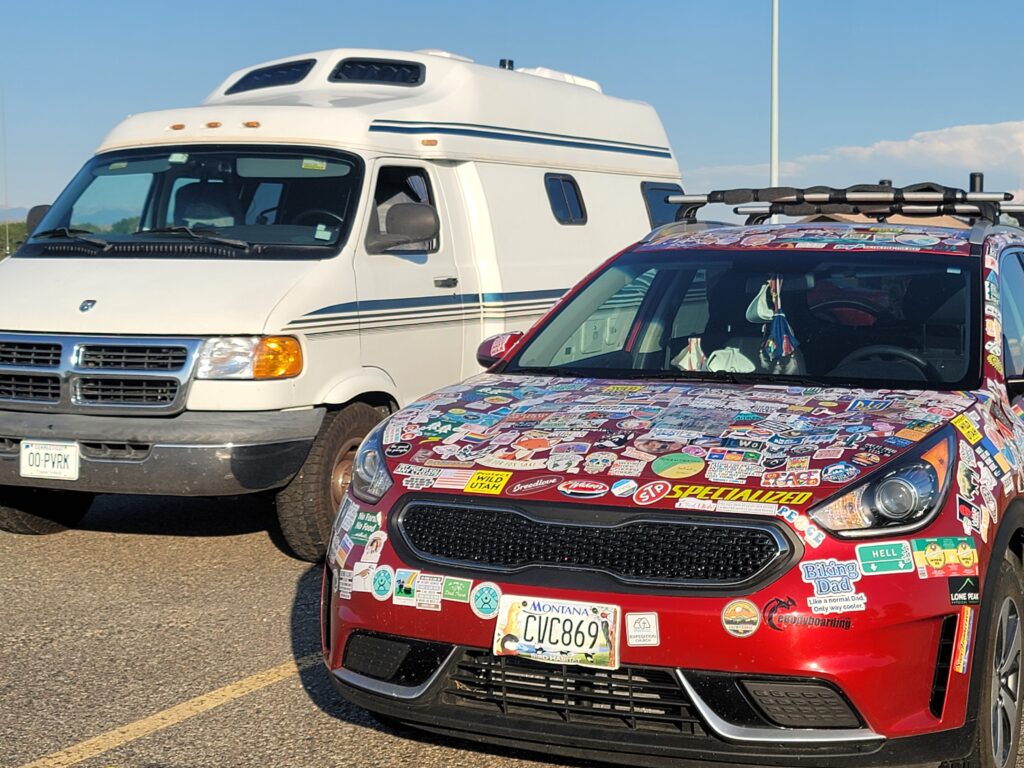 Categories: Go How Know How, North America, Travel by Land