Outta My Comfort Zone and Into the Ice in Finland 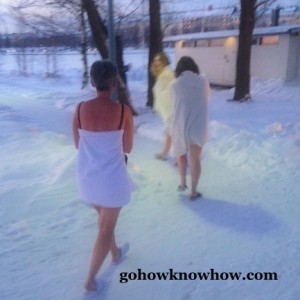 The walk to the sea

In Miami, where I grew up, swimming in the ocean was akin to stepping into the tub; no discernable difference in temperature between the water and the air and that’s just how I like it. So no one was more surprised then I to be bounding across the snow in Helsinki wearing nothing more than a swimsuit and a towel and headed to a hole in the ice on the Gulf of Finland. And yes, I was planning to swim.

To understand what lunacy prompted me do do such a thing, I need to wind back the story a few hours. 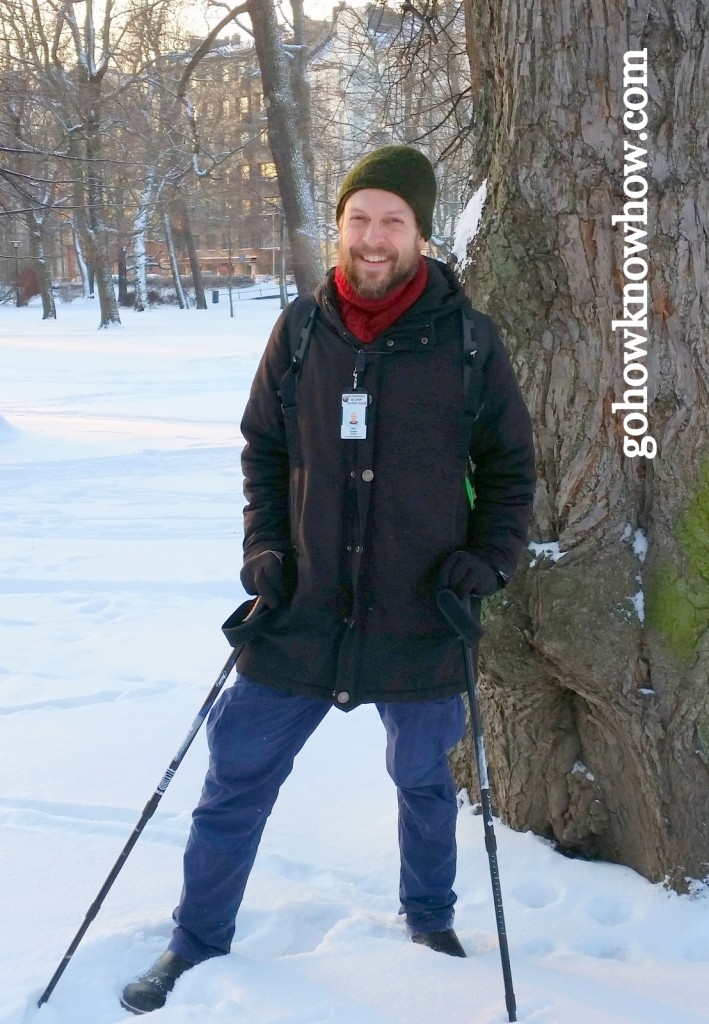 The plan was to take a hike, what tour guide Karri Korppi of Happy Guide Helsinki  billed as an easy city walk through the downtown streets, through the park, ending at a sauna by the beach. We’d be so “warmed up” by then, he promised, we’d welcome an opportunity to take a dip in the sea.

Meeting us at our hotel, the historic Hotel Torni (with the best darn city views you can get while still lying in bed) Karri distributed ski poles. A few people worried we’d look silly walking through the city streets with them. But Helsinki had received eight inches of snow a few days earlier and the sub zero temperatures made the ground slippery. I was glad to have the assist.

Just a week earlier I’d been using a hiking pole on slick trails in the tropical rainforest on the Dutch Caribbean island of Saba, about which, more later.

We passed the gia-normous Stockmann’s Department store and through the district of the Design Museum, which gave me the opportunity to recommend to my fellow walkers that they not leave Helsinki without visiting the permanent exhibit on the history of design in Finland. Glass, hospital beds, scissors, who knew? 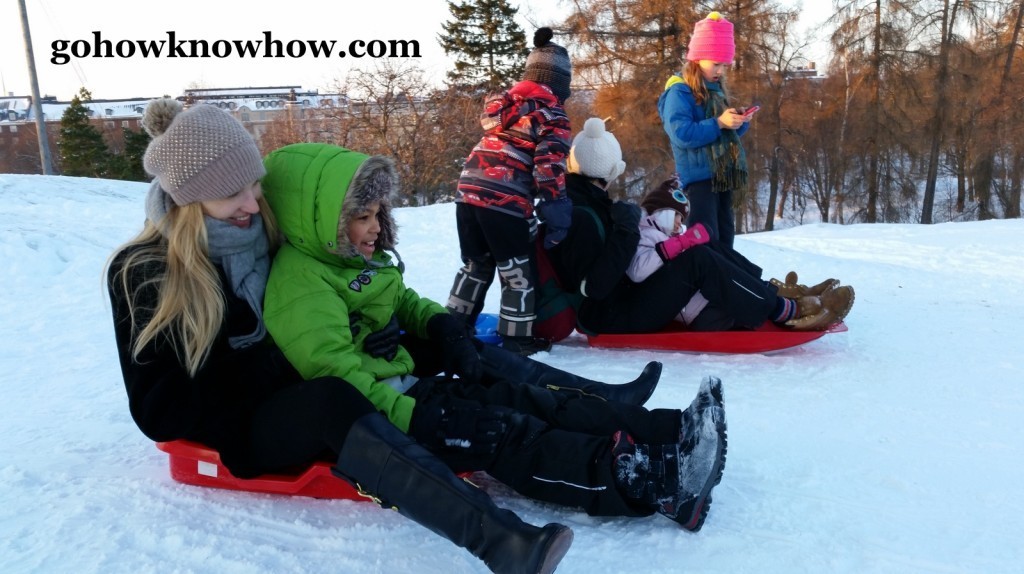 At Kaivopuisto, the city’s biggest park, a horse drawn sleigh was carrying a family through the evergreens – like a storybook illustration – and on the hill by the Ursa Observatory, people were launching themselves down the snowy bank on sleds and snow saucers. 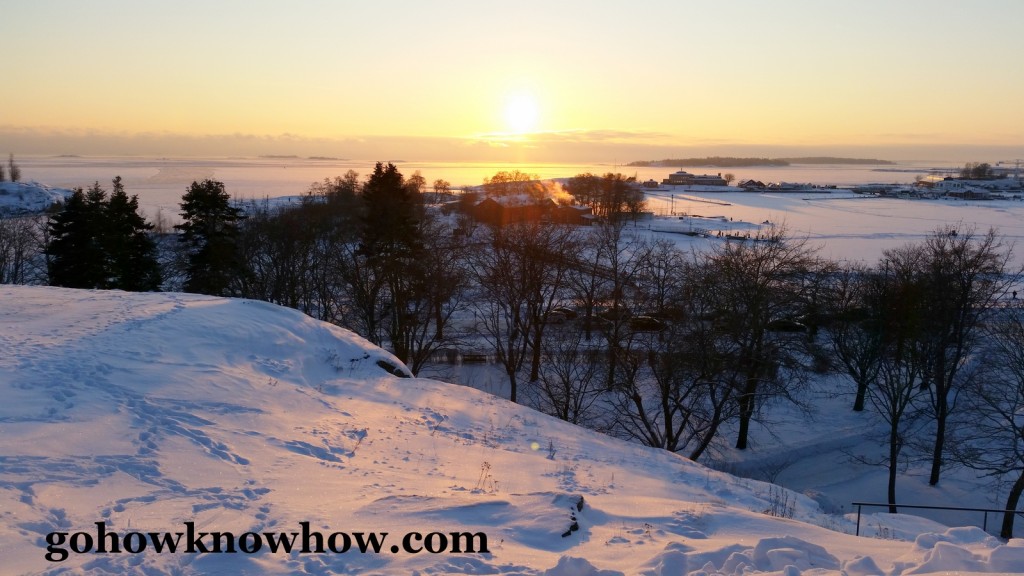 In January, sun sets in the south west

We stopped to watch the sun go down as much to the south as to the west, it was less than a month after the December solstice after all.  Then we picked up our sticks and walked toward the remains of the day to the promised warmth of the sauna at Uunisarri. 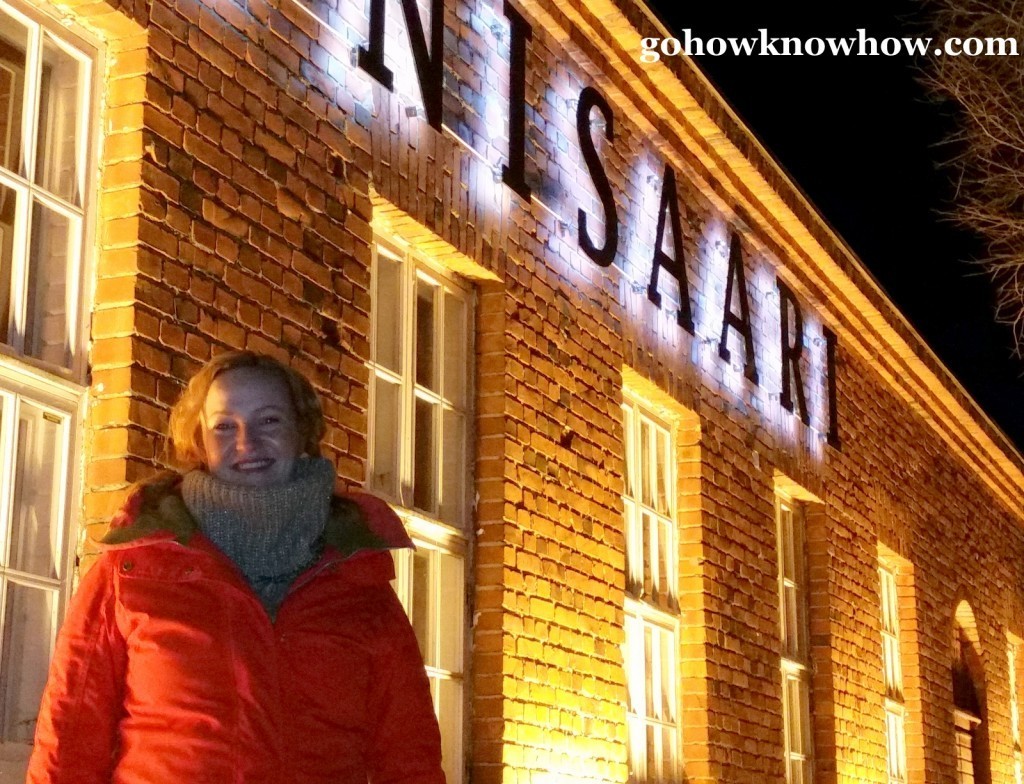 Nelly Karkkainen at her restaurant and sauna

Nelly Karkkainen and her husband run the Uunisaari saunas and the waterside restaurant next door. An actress by training, Nelly took over the business when her father died unexpectedly in 2015. Renovating the pre-war former industrial building had been her dad’s idea back in the nineties. It would expand his small beachside cafe, he figured. And boy oh boy did it.

On the Saturday of my visit, two weddings were scheduled for the restaurant, and guests bracketed our 2 hour stay at the spacious saunas. 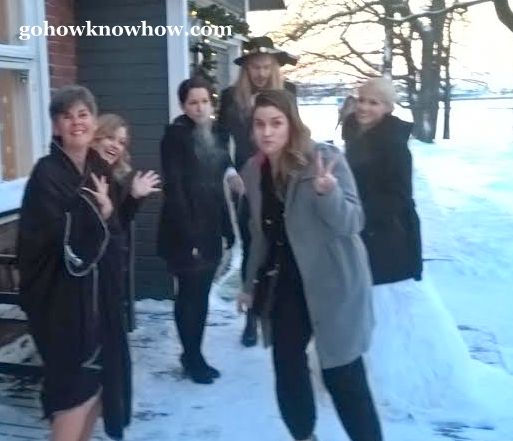 After learning about sauna protocol and culture, the women in my group quickly stripped down and headed up the stairs to the dark furnace. Deep sighs all around as frozen fingers and toes yielded. It never ceases to amaze me how quickly welcome heat becomes overbearing but within five minutes I was standing back outside, wrapped in a blanket.

I was enjoying the fresh air and chatting up the bride and groom and members of their party who had stepped outside for a cigarette. How gracious were they to let me join in a group photo?

The nearness of the window-lined restaurant discouraged my plan to swim in the altogether, though Nelly said it’s not uncommon. So donning a swimsuit, slippers and towel I was ready for the plunge. 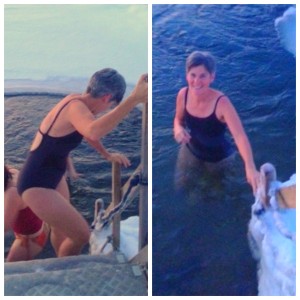 Swimming in icy water is healthy, the Finnish tourism officials claim, as does everyone else who actually does it, promoting circulation, and increased energy. Crossing a snowy expanse and clambering in to the sea on a frost-covered ladder, those are the things that will kill you.

Okay, truth? I didn’t get in any deeper than you see in the photo. I lingered long enough for Nelly to take a picture and prove to my disbelieving friends and family that this Miami-girl, did indeed step into a swimming hole cut into the ice in Finland in the middle of January.

And you should too. But first, let me recommend a brisk walk and a bake, top shelf at 212 degrees. 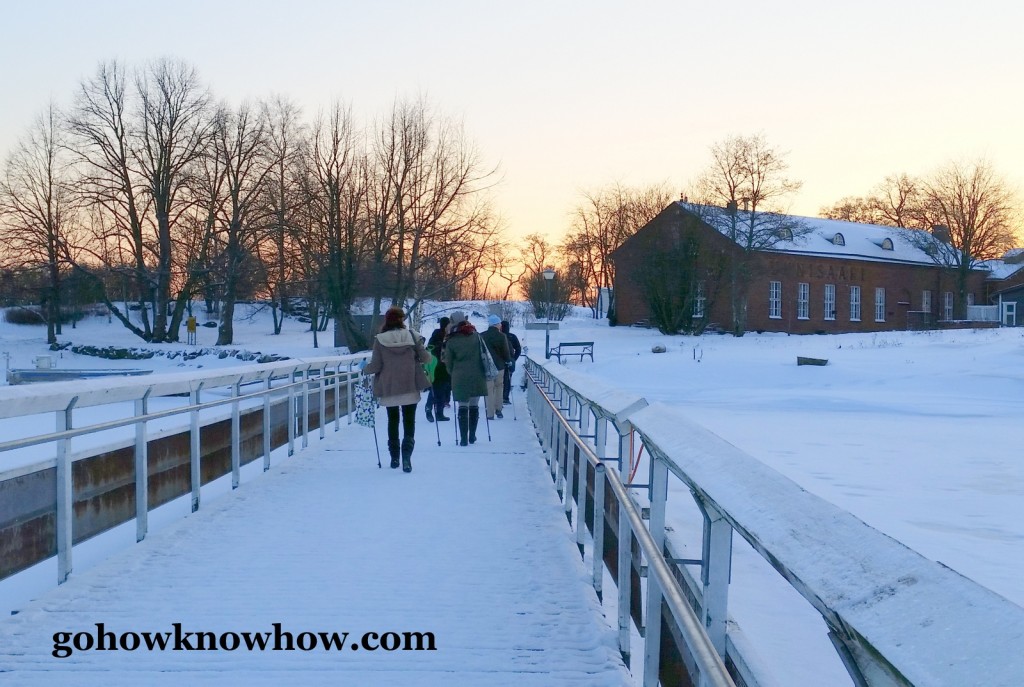