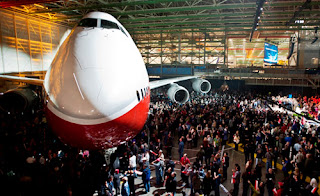 Congratulations, Wunderbar and Chuka Haeyo to Boeing for the banner day it had Sunday, unveiling its newest version of the 747, the 747-8 Intercontinental. Throw whatever numbers you want after the dash, add a glamorous “Intercontinental” to the end of it, but what you’ve got there my friend was and always will be the Queen of the Sky.

I’ve always loved the look of the 747. But Sunday’s unveiling had me feeling even more simpatico. Is it possible for a middle aged matron to feel a kinship with an airliner? With apologies to the Republican matron from Alaska, “You betcha!”

Like yours truly, the 747 jetliner is at the pivot point – at least as many years in her past as in her future. And where once the expression “jumbo jet” was oh-so-modern, describing the innovative twin-aisle airliner, now that she’s grown eighteen feet in length, the moniker seems even more fitting and in some photographs, not necessarily in a good way. Perhaps the camera added a few pounds. 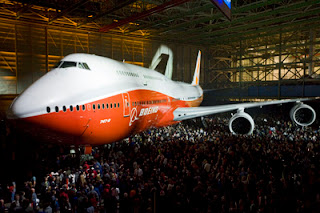 Boeing, Boeing, Boeing, give a lady a break after all she’s done for you. Some soft focus here please, less theatrical high contrast black lighting might be more thoughtful. And heavens, all those shadows! Is it me, or does this photograph make the poor girl appear to have two tails? The last time I saw so many unflattering photos  of a superstar, I was looking at Bradgelina on the front page of the Star while waiting in line at the grocery store check out.

OK, enough bitching about what was really a fabulous day for Boeing, Lufthansa, and Korean Air its launch customers for the 400-500 passenger jet. The orange livery was an audacious choice, a statement in a when-I-am-old-I-shall-wear-purple sort of a way. Definitely not for the timid.

But the pièce de résistance, where I felt the most kinship with this enormous inanimate object was the General Electric GEnx engines. Boys don’t get excited, I’m not talking about the ten-stage compressor, the carbon fiber fan system or even the 67,000 pounds of thrust with emissions far below federal guidelines. Nope, its the engine cowlings that caught my eye. 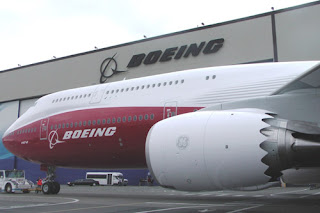 Like the big, dangle earrings I wouldn’t dare to wear until I was in my thirties, the scalloped shape at the exhaust end adds a funky kick to a total look. I don’t know what they’re for, perhaps you can tell me. But they are fabulous, wicked punctuation points that nicely update an aging icon. On Sunday Boeing proved by example something that this old gal wants to believe; its possible to mature with style and panache.