Should Epstein’s Pilots Have Foiled His Child Sex Trafficking Ring? 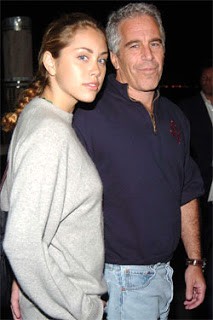 As new reports emerge about the various ways the late convicted pedophile Jeff Epstein procured and pimped young women to some of the most influential men in the world, the public has heard little from the pilots who greeted the VIPs and the underaged girls as they boarded Epstein’s private jets. Larry Visoski and David Rodgers flew for Epstein for nearly two decades. How could they be unaware of what the boss was up to?

Still, Visoski and Rodgers, both of Florida, remain free to work as commercial pilots with no enforcement actions taken against them from the years Epstein pled guilty to those activities. 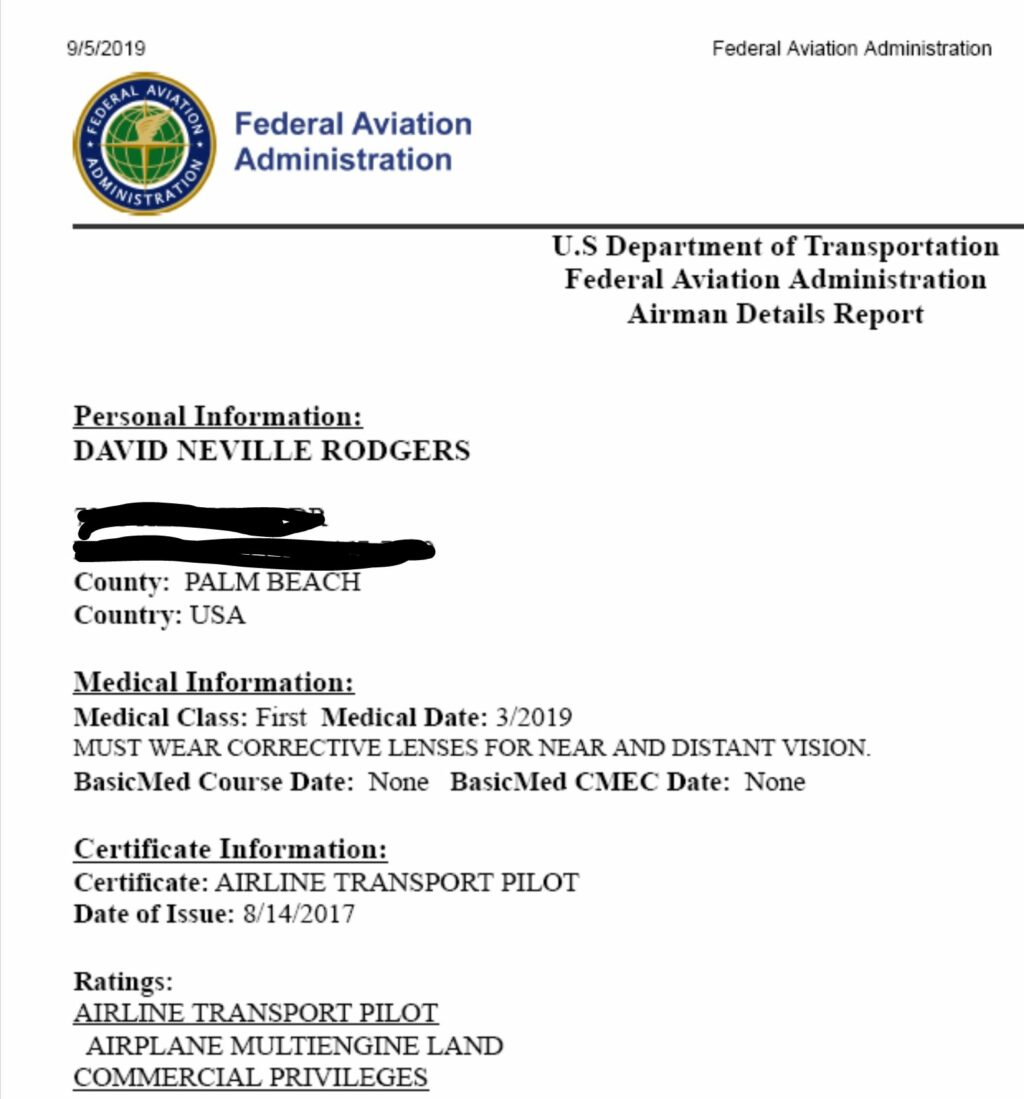 Virginia Roberts Guiffre, seen in the photo below with England’s Prince Andrew, says as a teenager, Epstein repeatedly ordered her to have sex with the prince. They are listed as having traveled together on Epstein’s planes on multiple occasions. Guiffre told the Miami Herald the planes were called the “Lolita Express” because they were used to “have sex with underage girls.”  If true, this would be a crime and if the flights crossed state or national borders as many of them apparently did, it would be a federal crime. Even so, according to the Federal Aviation Administration, it is not behavior that will cause a pilot to lose his or her license. 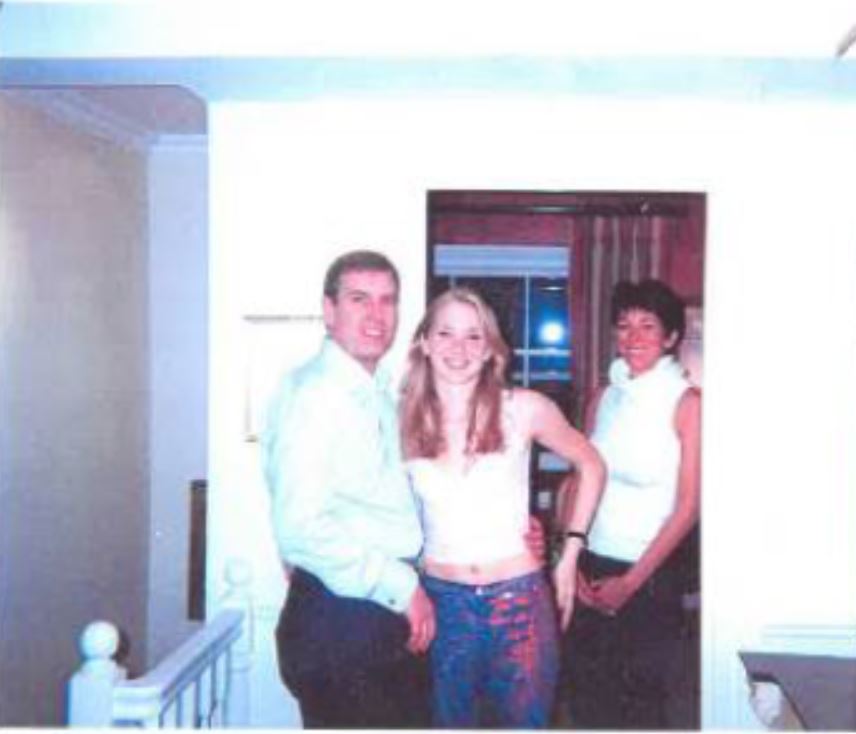 “The only criminal activity that can result in the loss of a certificate is using an aircraft to transport illegal drugs and flying while intoxicated,” said FAA communications manager Lynn Lunsford. “There is a provision for good moral standing, although it is nebulous.”

Neither Visoski nor Rodgers have been subject to agency enforcement actions in the past, according to Lunsford. The agency policy is not to comment on whether an investigation is presently underway. (Florida pilots Robert Gary Roxburgh, Pete Rathgeb, Bill Hammond and Bill Murphy also worked for Epstein, though less frequently.)

You may be baffled that transporting illegal drugs is a more significant threat to one’s pilot license than human trafficking. But more may be at play here.

Of the six pilots who flew for Epstein, only Rodgers appears to have kept detailed notes about his passengers. His handwritten logs are a mind-boggling list of names including Bill Clinton, Kevin Spacey, Colombia’s former president Andres Pastrana, New York hedge-fund operator Glen Dubin and model agency owner Jean Luc Brunel to name just a few. The flights were both within the United States and international. Rodgers describes trips that hopscotched across Europe, North Africa and Asia. 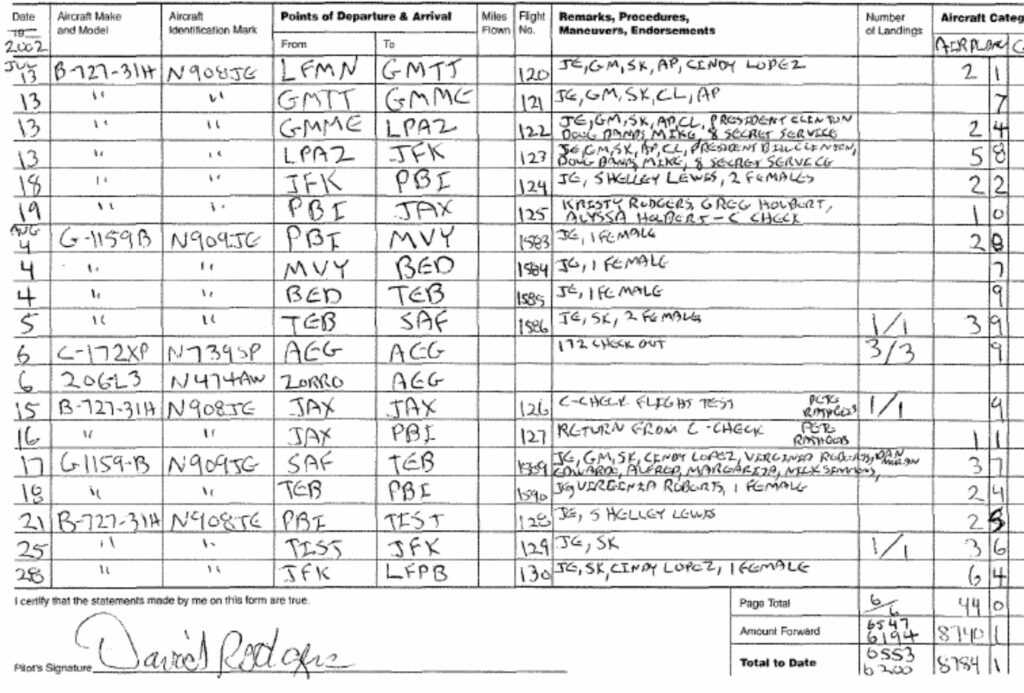 Rodger’s logs corroborate some of the claims of Guiffre – who said she was not only Epstein’s sex slave but was repeatedly ordered by him to perform sex acts on Harvard law professor Alan Dershowitz and Brunel as well as Prince Andrew. Prince Andrew and Dershowitz have both challenged her story.

Perhaps federal investigators are squeezing Rodgers and Visoski, holding the “good moral standing” clause over their heads to encourage them to tell what they know or risk losing their tickets to fly.

“If the government can make a compelling case that they knew the conduct was occurring and that they aided Epstein or helped hide it from the authorities, the FAA may make a case that their licenses should be suspended or revoked,” said Justin A. Marchetta a New Jersey lawyer representing aircraft owners, operators and pilots with the New Jersey firm,  Inglesino, Webster, Wyciskala & Taylor

Just last year, New Jersey private pilot Stephen Bradley Mell, surrendered his license and three aircraft he owned after making a plea deal with federal prosecutors on charges he used his airplane to cross state lines with a minor for purposes of engaging in sex with a 15-year old. 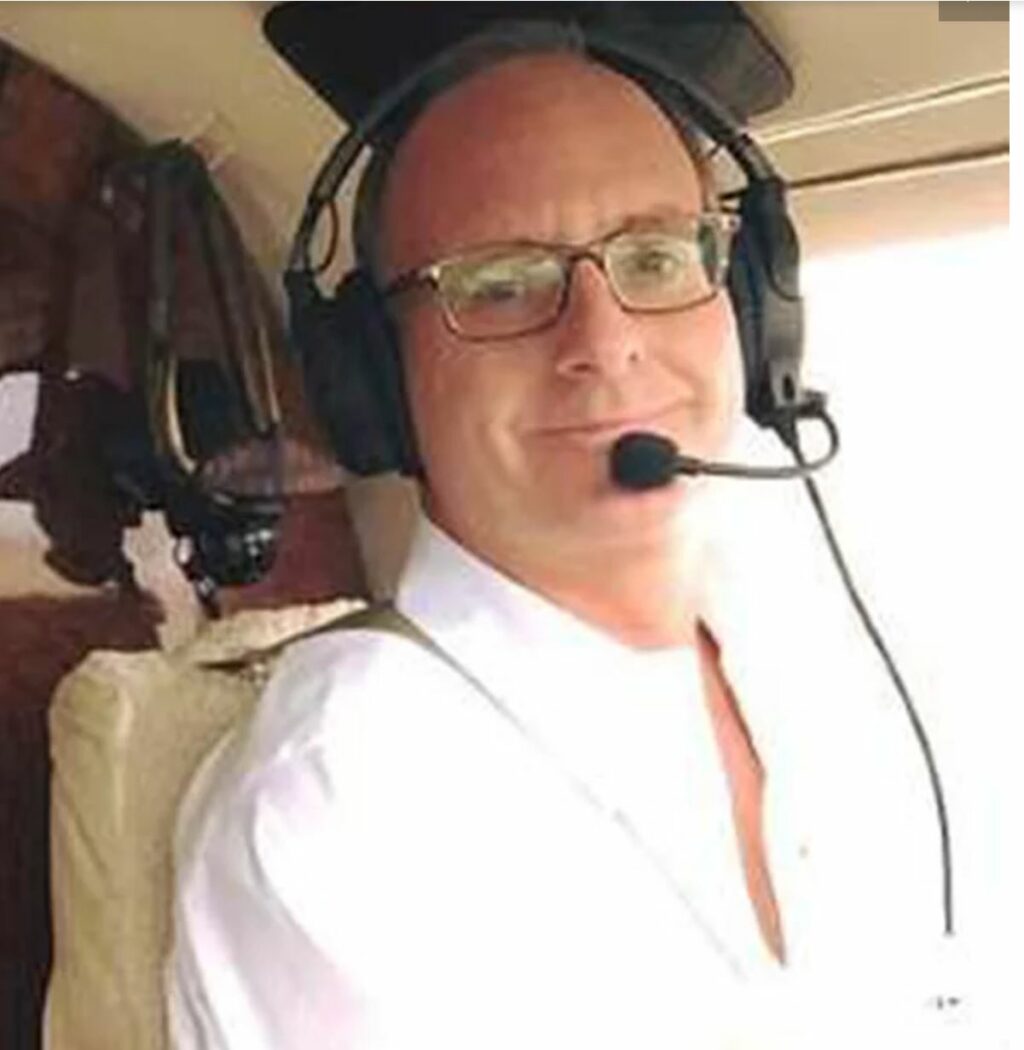 Mell met the teen when her mother brought her to Mell for flying lessons. Prosecutors claimed that Mell took the girl out of state. On one occasion according to the indictment, the 51-year-old married father of three, put his plane on autopilot to have sex with his victim on a flight from Massachusetts to New Jersey.

“The case of the pilots of Epstein’s planes, it is more nuanced,” Marchetta told me. Visoski and Rodgers “may or may not have known this was going on or that the girls were underage.“

Perhaps, but Rodgers saw a lot. From 1995 until 2013, he wrote a detailed entry for each trip he flew for Epstein. Rodgers testified in a 2016 deposition that “people get on the airplane and I see who the people are, and I put them down there,” he said of the log. While Rodgers said he tried to be as accurate as possible, some passengers got more attention than others. There are repeated instances when Rodgers noted the traveler not by name but by gender, even on international flights. 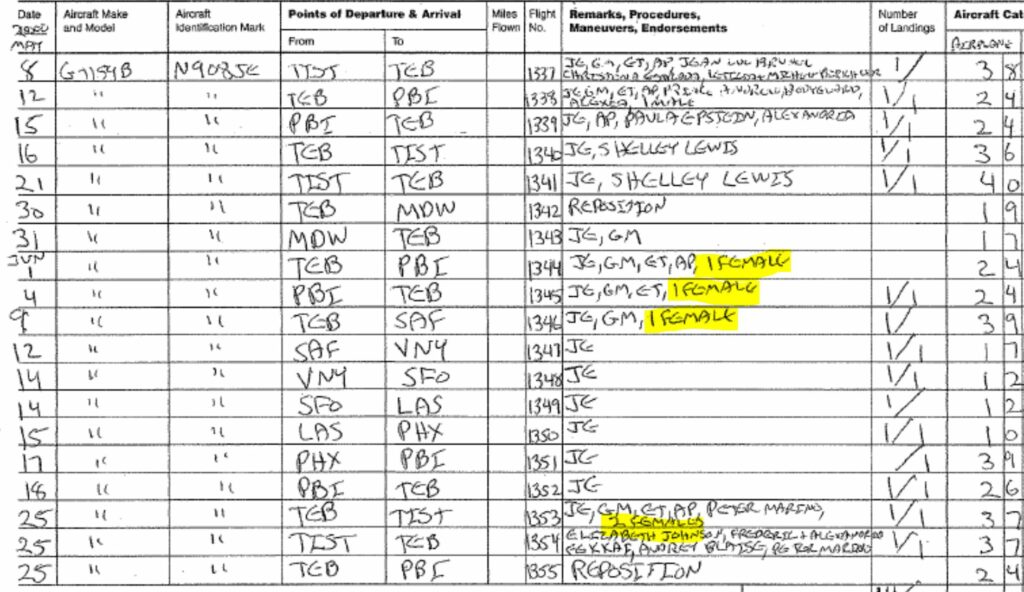 This raises the question of whether he complied with immigration and Homeland Security requirements.

Rodgers and Visoski were well acquainted with Epstein’s “sex slaves” and young companions. Both men had apartments in the same New York building at 301 East 66th Street as Epstein’s unindicted co-conspirator, Global Girl celebrity pilot Nadia Marcinko who was herself reportedly an early victim of Epstein. On her social media feed, Marcinko posted photos and videos of herself flying right seat with Visoski. 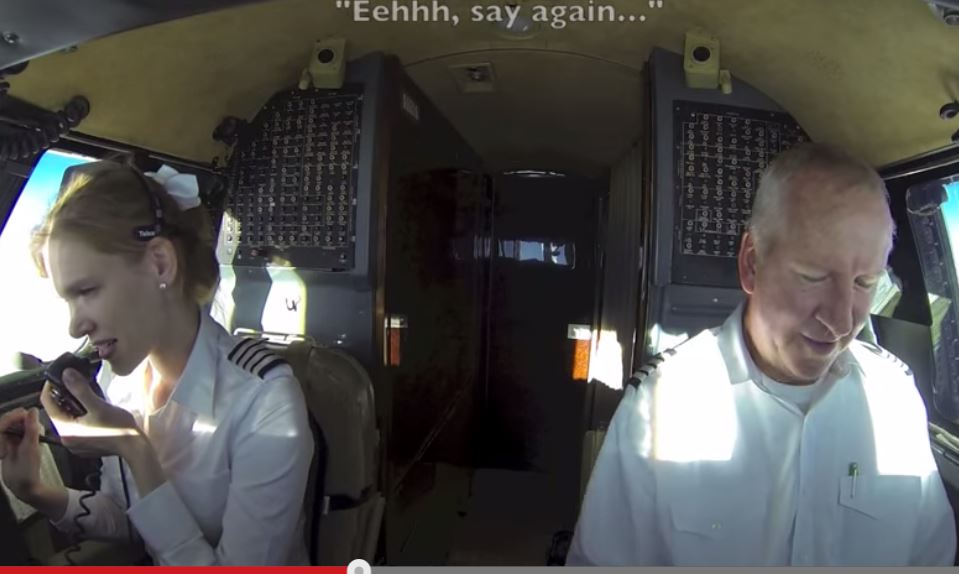 Rodgers testified that the girls flying with Epstein into New York often stayed in other apartments in the same building, all of which were owned by Epstein. If “she’s on the plane with us on multiple trips then most likely she probably stayed there,” Rodgers said of the girl travelers. (Business Insider has an interesting investigation into the building on 66th Street which you can read here.)

Pedophilia and human trafficking are serious crimes but Epstein did not commit them without help nor is that the likely limit of his nefarious activities. As various news accounts show, over the course of decades, Epstein orchestrated an international network of wealthy, powerful and influential people who my Uncle Maurice would call “no-good-niks.”

Just because Epstein is dead, other scoundrels should not be able to get away with their crimes, including the pilots who appear to have enabled a lot of bad behavior without encountering a single unpleasant consequence.  No investigation into Jeffrey Epstein should be considered complete without getting the full story from the pilots. And maybe the FAA should consider if Rodgers and Visoski met the “good moral standing” expectation attached to their pilots’ licenses.

11 responses to “Should Epstein’s Pilots Have Foiled His Child Sex Trafficking Ring?”