Airplanes Give Rise to a State of Accomplishment 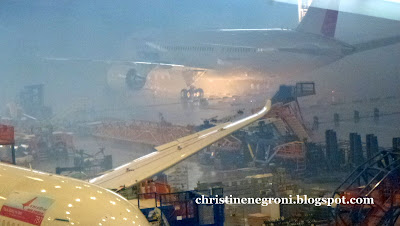 Rehearsal of the light show before the Dreamliner rolls out.

At the risk of sounding as if I’d been sucked into the enthusiasm generated by the marching band, the fireworks, the laser show and the smoke machine, let me just say that the rollout of the first Boeing 787 to be assembled outside of Washington state was an impressive event. 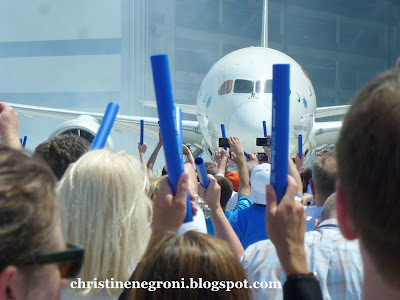 Spectators “marshal” the Dreamliner out of the hangar.

Just 2 years after turning a Carolina swamp into an million-plus square foot airline manufacturing and assembly plant, the shiny new airliner, the first of seven bound for Air India’s fleet emerged from the darkened hangar.

On the other side, waiting in the bright sun were Boeing employees and thousands of other guests who waved their souvenir marshaling wands – a symbolic gesture that reinforced the theme of the day; only the combined efforts of many brought this airplane to town. 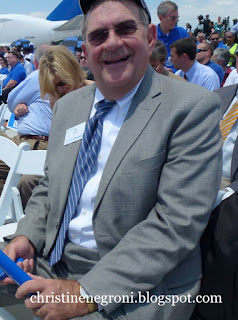 Mayor Bill Collins of nearby Summerville was fidgeting in his seat like a child, so excited was he to see the final product. He told me many of the 6000 workers live in Summerville. It’s a great day for South Carolina, he blurted out at one point, making up in sincerity what the thought lacked in originality. Yes, this airplane plant is not just another new company come to town, it is a jumbo-sized economic engine.

“This is an entirely different level, we are playing at the global level”, said Sean Bennett, a financial adviser and volunteer with the Charleston Regional Development Alliance, who participated in the effort to woo Boeing aircraft manufacturing out of the pacific northwest.

In the hours before the public event, I was one of several dozen journalists given briefings by Boeing executives and taken on a factory tour. It wasn’t all about drill stacks and nitrogen systems. 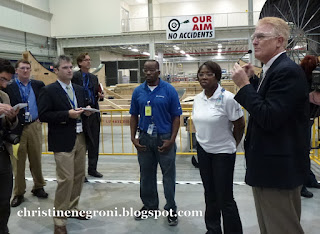 At the three-story delivery center, where multiple airlines can set up temporary offices or invite their national dignitaries when they actually take possession of their own Dreamliners, it dawned on me just how far the economic benefits flow;  To the  hotels and restaurants and shops providing services to the visitors, to the caterers, suppliers and transportation services the delivery center will need. And just as significantly, the companies that provide components for the airliner that may decide there is value in moving their own companies to South Carolina.

This has given the development folks a new way of looking at the future of the state. Sure, they’ll keep pursuing businesses to come to the Charleston area, but as Claire Gibbons of the Development Alliance told me, “It’s not about quantity now. It’s about bringing quality employers and higher wages.” 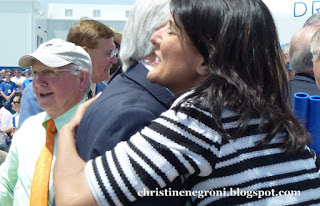 So aside from the marquee value of this big, beautiful, highly technological airplane, its no wonder South Carolinians are beside themselves. Witness Governor Nikki Haley hugging everybody.

I’d be remiss if I didn’t weigh the delight of South Carolina’s gain against the loss in Puget Sound, Boeing’s traditional home. Years of labor unrest brought members of the International Association of Machinists somewhere they did not expect to be; no longer the sole producers of widebody assembly and delivery.

In documents made public during an attempt by the National Labor Relations Board to stop the move of Boeing manufacturing to South Carolina, it was revealed just how much of a role work stoppages in Washington had in convincing Boeing to consider opening a plant in a right-to-work state.

After a five-month strike by Machinists in 2008, the board of directors at Boeing heard arguments that creating a factory in South Carolina would create a non-union environment, lower labor costs and avoid the “current hostage situation.”

The NLRB dropped the case after Boeing and the IAM quickly negotiated a contract for the Washington State-based workers. It was a Christmas present for Boeing and for South Carolina and it may be the gift that keeps on giving, if the Charleston plant expands as currently outlined. 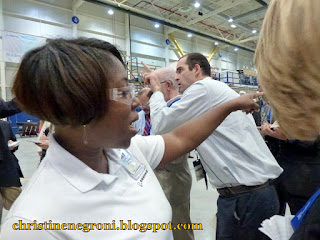 Andrea Wilson is a manager

As we walked past fuselage sections and wire running stations and viewed the adorably nicknamed “daughter of all tooling towers” (Presumably the mother is arched over the Queen of the Sky in Everett)  we were told repeatedly that the goal of advancing from 3.5 Dreamliners per month to six was merely a stop along the way to 10 per month. 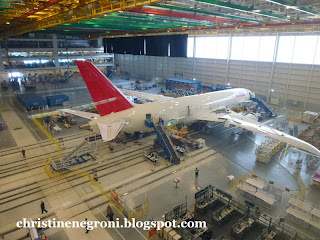 A Dreamliner in the assembly stage.

The final assembly floor which now moves the planes in a four-station U shape will expand to a linear 8 station side by side so that two planes can be assembled at the same time. In those documents the NLRB got its hands on, there was a discussion of the plant’s role in “the next new airplane program”.

All of this is to explain why South Carolinians are living a state of ecstasy. They see that they are on the rise, that Boeing has bestowed on them an opportunity to roll out for all the world to see, just what accomplishments they are capable of achieving. 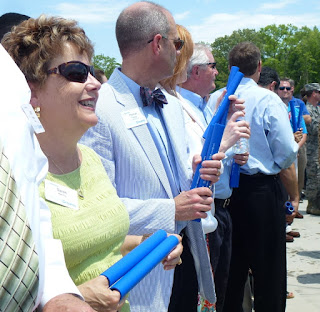 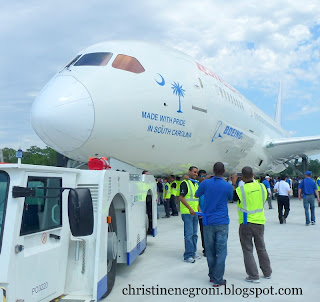 3 responses to “Airplanes Give Rise to a State of Accomplishment”