How Alarming are Airport Ramp Accidents? 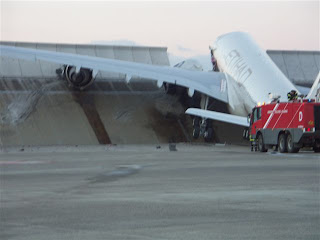 Etihad destroyed in Toulouse photo- Bureau d’Enquêtes et d’Analyses
If there’s one thing you can count on in aviation it is that every aspect of it is a lot more complicated than you think. In a recent post on ramp accidents, I cited a Flight Safety Foundation report which gave some pretty alarming numbers.

I
In the May 2007 issue of Aerosafety World, the Flight Safety magazine used numbers from the International Air Transport Association to estimate that there were twenty-seven thousand ramp accidents each year in which 240,000 people were injured. A number of readers have since told me they thought the numbers, which have appeared in other aviation magazines since the article was published were just too high.

No one quibbles with the statement that ramp accidents are tremendously expensive, after all, it doesn’t take too many dings in a $100 million airplane to start running up a serious repair tab. But a quarter of a million injuries? This just can’t be. IATA, the source of the original numbers, is arguing with the FSS report. 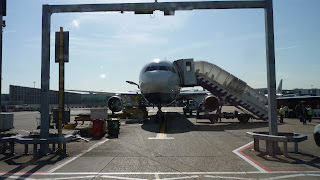 Aeropuerto-Madrid-Barajas Internacional
Anthony Concil, spokesman for IATA said, “ramp fatalities are anecdotally five to ten per year.”  He suggested that the quarter of a million injuries cited by FSS are on-the-job injuries, not atypical in any industry that deals with machines and moving vehicles. “To connect the number of on-the-job injury reports to ramp accidents misrepresents actual events.”

Curiously, while Jay Donoghue of the Flight Safety Foundation’s office of publications admits there was  some discussion over “the disparity in numbers”, a week of exchanging emails with the Foundation yields no further explanation.

The Air Transport Association tracks ground-based events, but the numbers are not shared outside of the association.
So what do we know? Well, in the United States, when serious injuries or substantial damage are involved, a report must be filed with the Federal Aviation Administration.  Bob Matthews – attendant of these statistics at the FAA – says that from 1996 to 2010 there were 46 fatal or serious injuries during ground operations at U.S. airports. And while the U.S. is a busy aviation market, it represents just a fraction of commercial aviation worldwide.
The U.S. had a fatality-free year in 2009 and 2010, Matthews said. In other countries it is a different story. At one unidentified airport in India earlier this year, a worker’s hand was trapped in an retracting jetbridge and while the employee was rushed to medical care, she did not survive. At an Asian airport, a ramp worker was crushed under the wheels of a power supply vehicle. 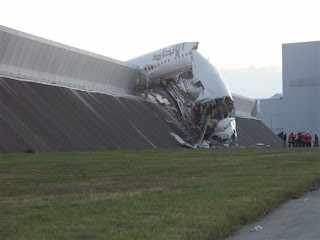 photo- Bureau d’Enquêtes et d’Analyses
Ramp workers have been sucked into airplane engines, crushed in scissor lifts and hit by tugs. Five of the people on board this Etihad Airways A340 were injured when the airplane crashed through a containment wall during ground tests. A factor in the loss of the airplane? Wheels not chocked during engine and brake system testing.
From simple mistakes do great losses originate.
Whether the emphasis on the collision between an Airbus A380 and a Bombardier CRJ 700 is due to the fact that it was video taped and uploaded to You Tube, or an appropriate reaction to the latest illustration of something larger, there should be no argument that it is imperative that the industry get a handle on the size of the problem.
That the assessment of two respected aviation institutions can vary so widely tells me that the effort to quantify the issue is long overdue. Last month, IATA began the first worldwide effort to gather meaningful statistics. Overstating the problem is no better than understating it.
“Ground damage is a big issue but these statistics need to be related to their source,” Tony told me while explaining that the FSS numbers just don’t add up.  They are not, he said,  “the reality.”

4 responses to “How Alarming are Airport Ramp Accidents?”