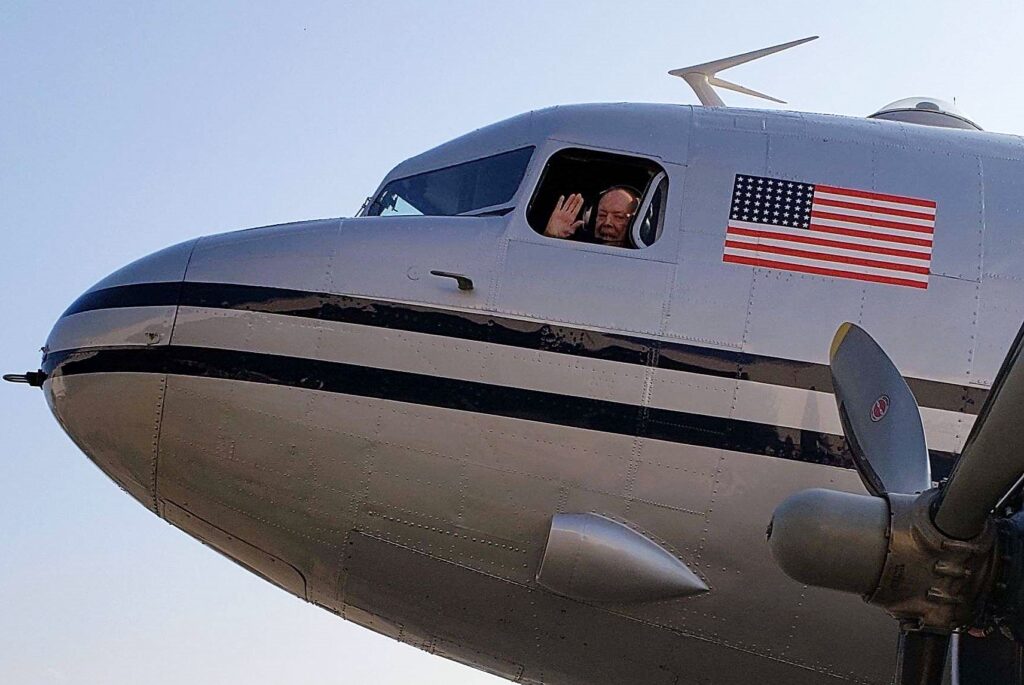 “There are old pilots and there are bold pilots, but there are no old, bold pilots,” or so the saying goes. Then again, there is Pete Goutiere who turns 106 today.

From 1943 until 1947, Capt. Goutiere was one of the American pilots for China National Aviation Corporation (owned in part by Pan American World Airways) who was helping to bring into China, troops, food, fuel and other supplies after Japan severed China’s only land supply routes through Burma. Pilots of these flights were required to fly between India and China, over the Himalayans in heavily-loaded, unpressurized airplanes, at altitudes that barely skimmed the rugged mountains in all kinds of weather and often in the dark of night. 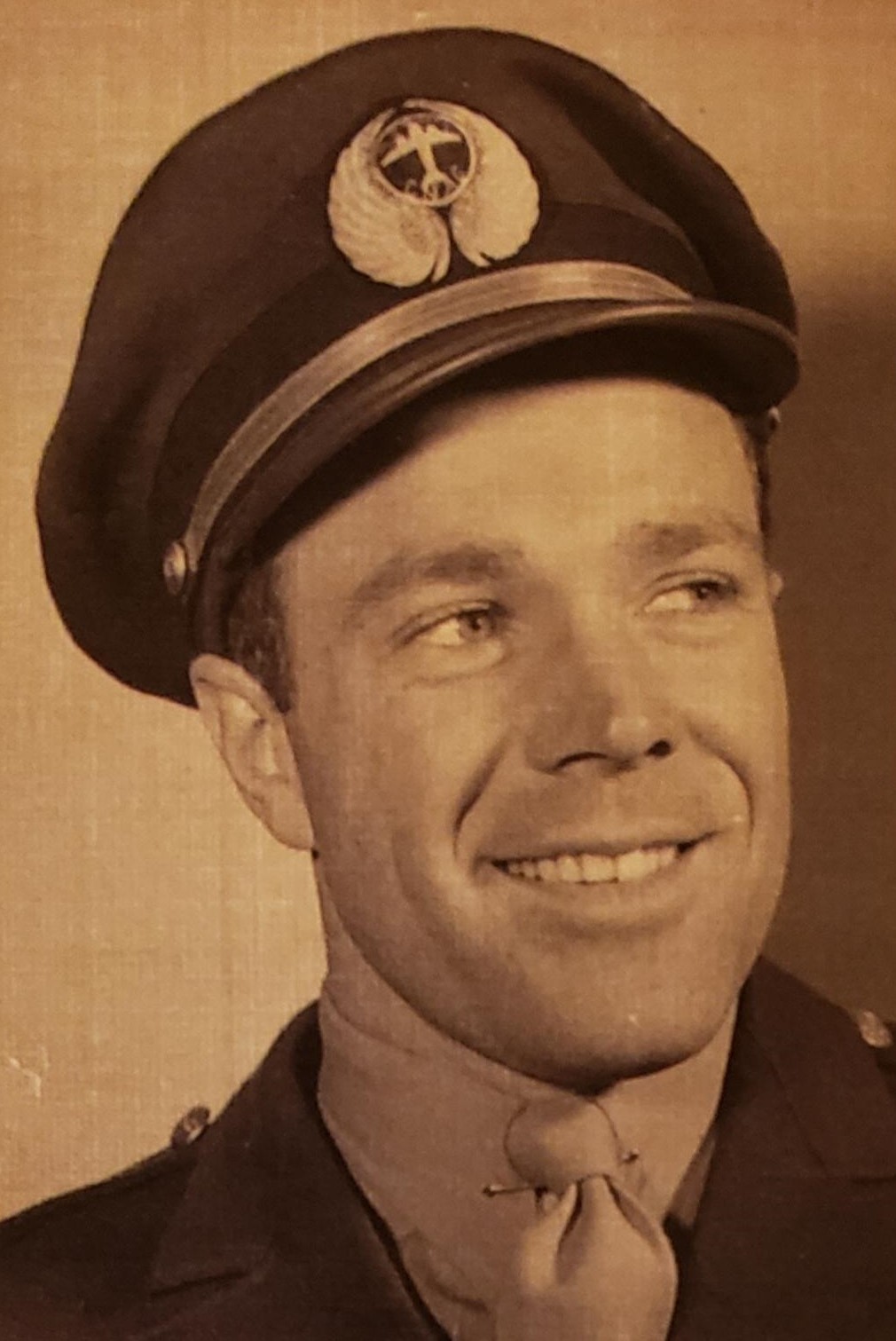 In an interview with CNN in 2014, Goutiere explained the risks this way, “There were three enemies, mountains, Japanese and the weather. Weather is what did the most damage.”

One night in particular remains in his mind. Goutiere was flying with a new pilot who’d already earned the nickname, Jinx. Jinx handled the controls on the outbound to Kunming but when the fog rolled in on the return to Assam in northeastern India, 600 miles away, the more experienced pilot took over.

“The next thing you know, I was in a big cumulonimbus cloud full of ice, and my aeroplane was completely iced up,” Goutiere told me. “I was like a big ice cube in the shape of an airplane. It had tons of ice, clear ice, not that rime ice that you can shake off.”

Goutiere wanted to get into the warmer air of a lower altitude. And while some of the highest peaks in the world are part of the Himalayan range, the ridge facing the CNAC crew was under 12-thousand feet – but barely.

“It was pitch black and I realized I wasn’t going to hit the mountains, so I asked Jinx if he would like to barrel out, but he was shook up. He said no.”

“I couldn’t see anything for a while and then I saw lights and we were back in Assem. The chief pilot came out and said, ‘What in hell have you done?’ All the ice was falling off my airplane. And I said, ‘I brought you all this ice where is the Scotch?’ and that’s when Jinx said, ‘I quit.'”

Goutiere flew across the Hump, 680 times before the war ended. He is one of only two CNAC pilots still alive, the other is 108-year old Moon Chen, who flew 500 Hump flights. 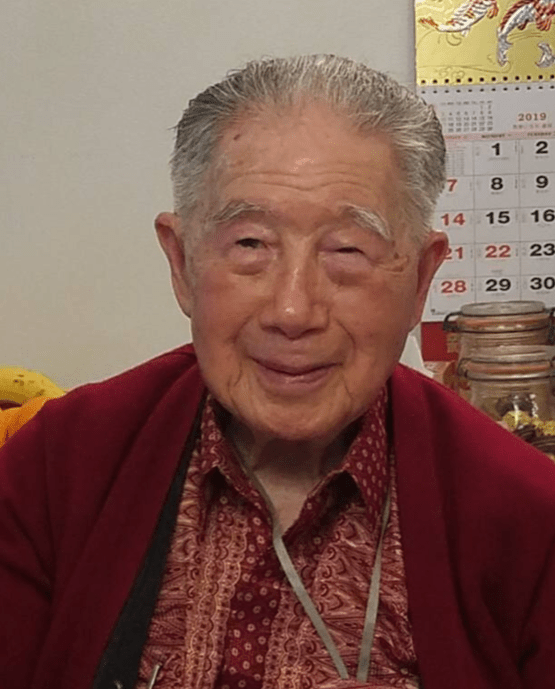 The two men remain in touch and are featured in China’s Wings, Gregory Crouch’s excellent book on this piece of World War 2 and aviation history.

“It is utterly miraculous when you think of the risks they faced as young men,” Crouch told me. “They regularly flew. They were really pushing. They would fly 3 trips, that’s 15 hours and this was demanding flying with an hour or two at each point. Pete flew many hump missions without a co-pilot just a radio operator.” 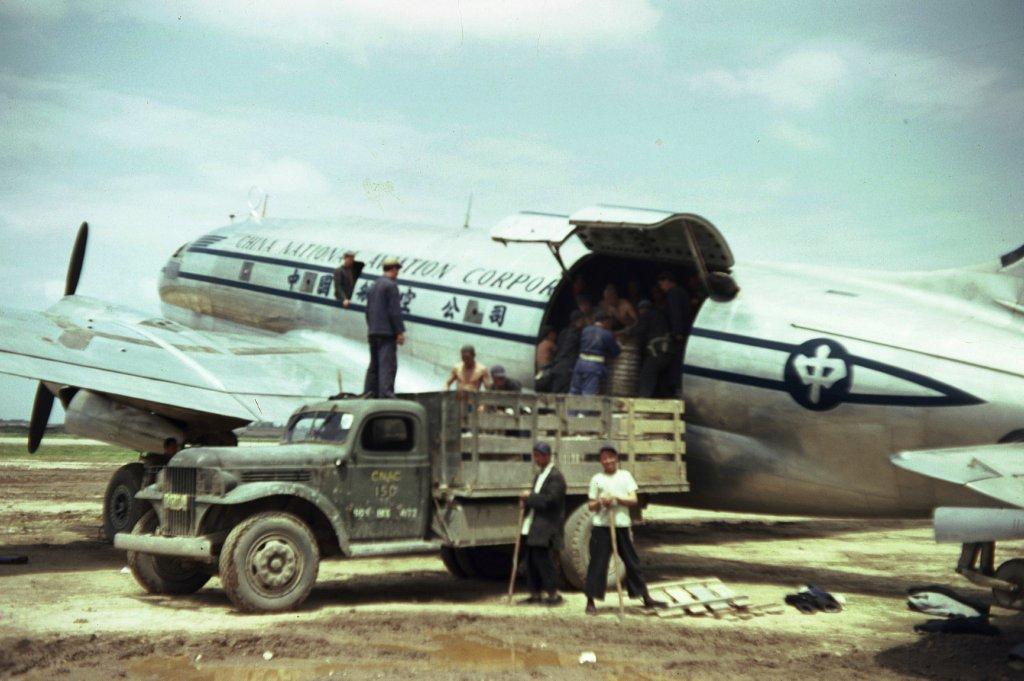 For all the stress, the memories Goutiere shares usually have a chuckle too. “You know how people write things on their aeroplane, right?” he asks me. “Well, this one guy had a golden dragon on his airplane with smoke and things coming out of his nose.” The C-47 is a tail-dragger, he reminds me and then he delivers the punchline.  What’s written below the nose art is, Assem Draggin’.

Twenty-five years ago, Goutiere published his autobiography, Himalayan Rogue, (now out of print.)  Don’t think his adventurous life ended along with the war. 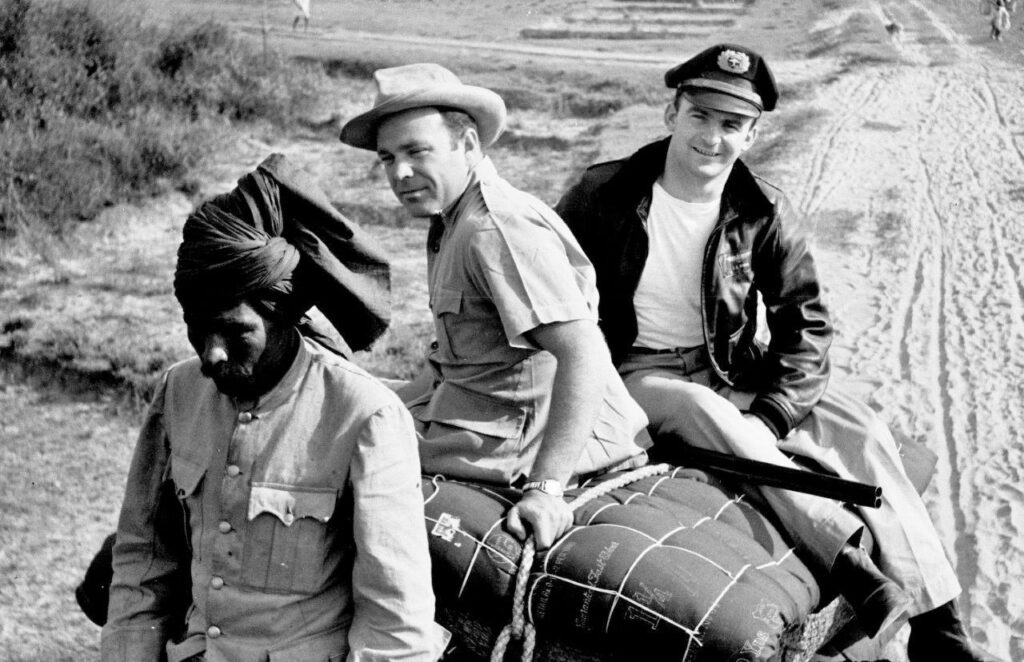 Born and raised in India and fluent in Hindi, Goutiere remained in India flying the DC-3 owned by his friend, Jaipur’s last Maharaja Sawai Shri Sir Man Singh II. After the creation of Pakistan, in 1947, Goutiere got work flying pilgrims to the Hajj in Mecca. In both cases, his familiarity with the C-47, the military version of the DC-3 made him a popular pilot and his affection for the culture of these regions kept him on that side of the world.

In the fifties, Goutiere moved to Jordan at the request of Hussein bin Talal the teenaged king who was an aspiring pilot. Goutiere helped Hussein get certified on the Boeing 707, America’s first jetliner, which had just entered commercial service. The king appears to have been appreciative.

“He had a big celebration for me and introducing me to Jordan,” Goutiere told me. A sheep had been prepared and served on a silver platter piled with rice.

He was served “hunks of meat” along with the sheep’s eye. At which point Guitiere told me the king said, “That’s for you. Wrap it up in rice and you can eat it.”

The idea did not appeal to Goutiere. But this was not the first time he’d been presented with something unusual to eat.

“I looked at that eye and that eye was looking at me and sure enough, I  wrapped it with rice and ate that great big eye. That was my introduction to Jordan.” 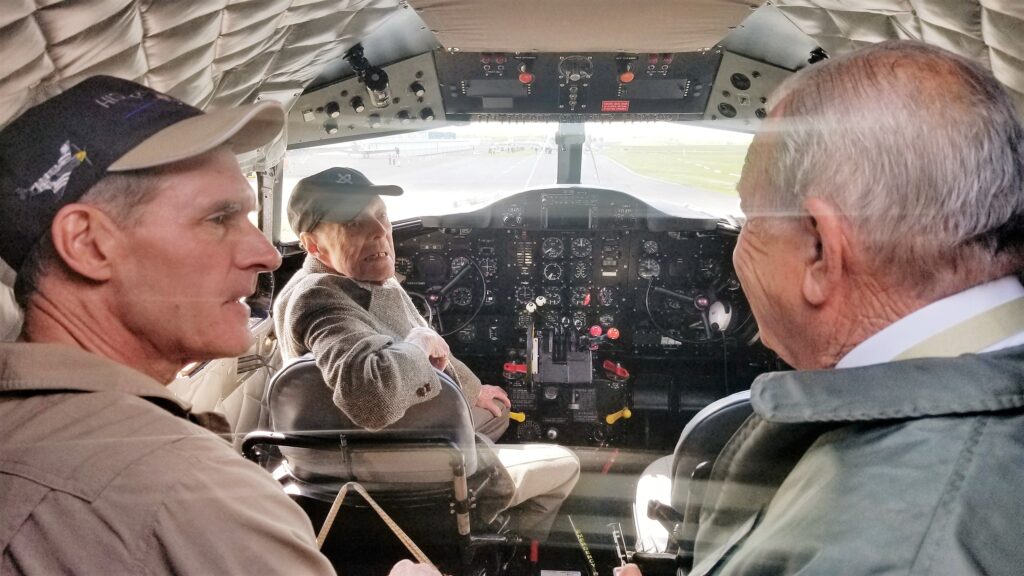 Goutiere returned to the United States and began working for the FAA. This is another story with a punchline and a reminder of how things had changed from the days of Hump flying.

“After breaking all the rules and regulations, I jumped over and joined the Federal Aviation Administration, giving Pan Am pilots their flight checks from the 707 to the 747. I had to be qualified as a pilot and a flight engineer.” 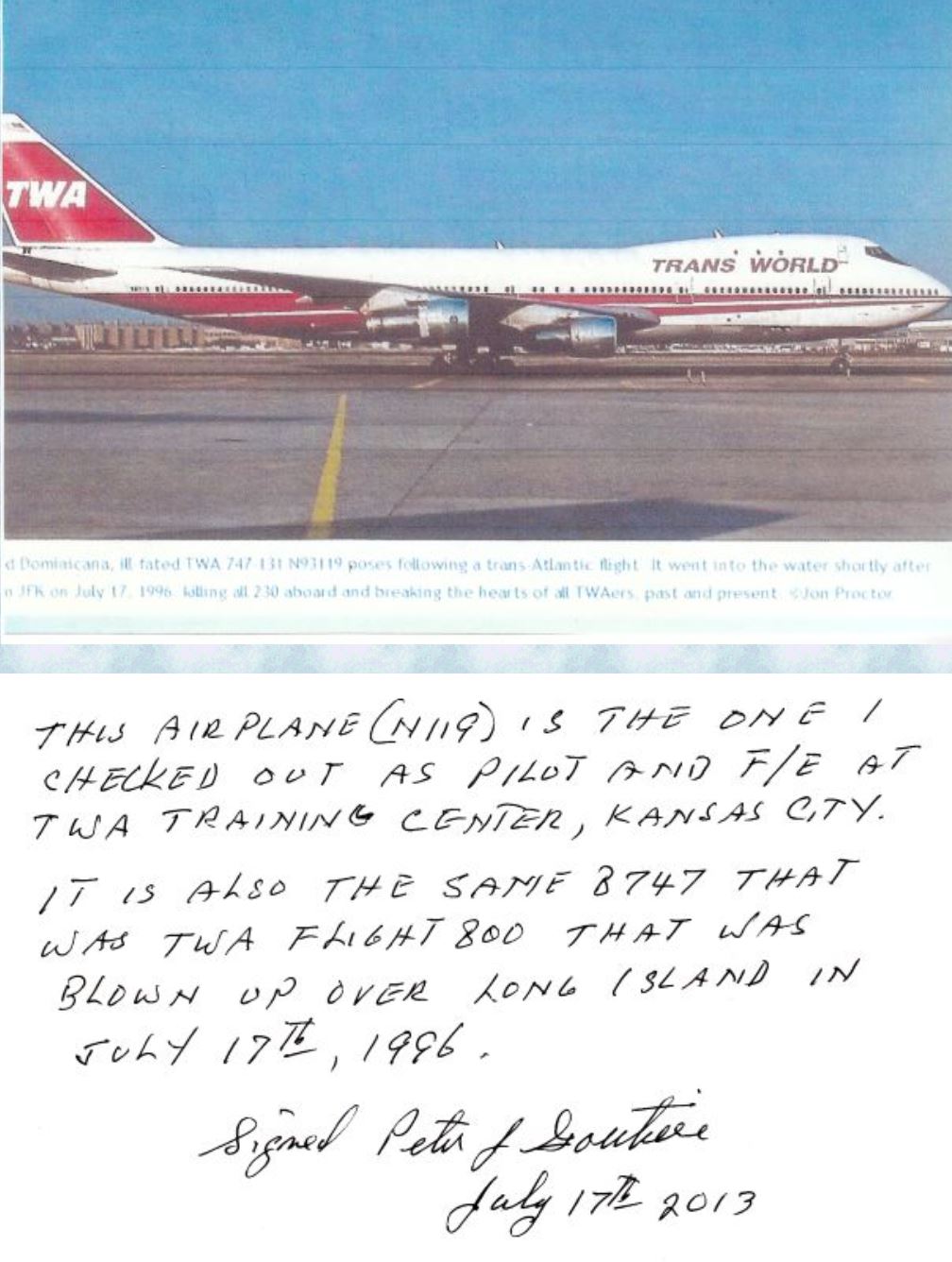 I flew with Goutiere in May 2019. We were both passengers in a restored Douglas C-47 Dakota that a few days later would join a dozen other WW2 era planes departing from Connecticut to cross the Atlantic for D-Day Invasion commemorative events in Europe. I was writing the story for The New York Times.

For me, it was a living history lesson but for Pete, it was much more personal. He’d flown that very airplane into the Pacific theater in September 1944. I watched as he leafed through the logbook, finding his own writing on the pages, still legible three-quarters of a century later.

You may know that CNAC was not the only entity flying the Hump route during the war. The US Army Air Corps did as well, under the direction of a Claire Chennault and going by the name, Flying Tigers. But after the bombing of Pearl Harbor when Goutiere applied to the Army Air Corps, he was turned away. At thirty, he was over the age limit for military pilots. Joining a civilian outfit supporting the war effort was Goutiere’s way around the restriction.

Despite the numbers, Pete Goutiere wasn’t an old man then. And he doesn’t seem like an old man now. 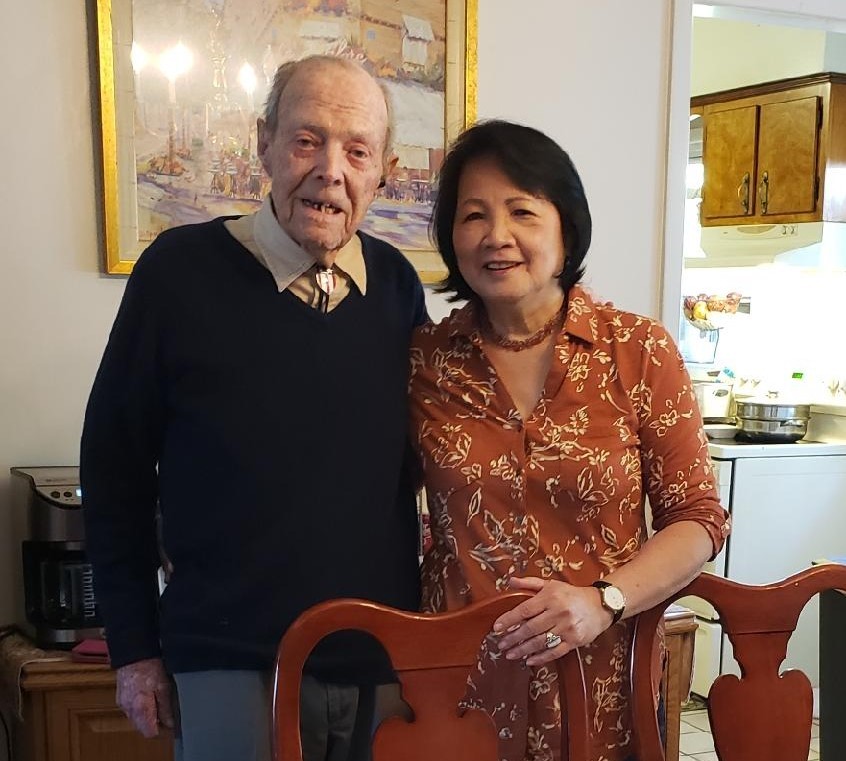 Peter Goutiere with Evelyn, his wife of 33 years