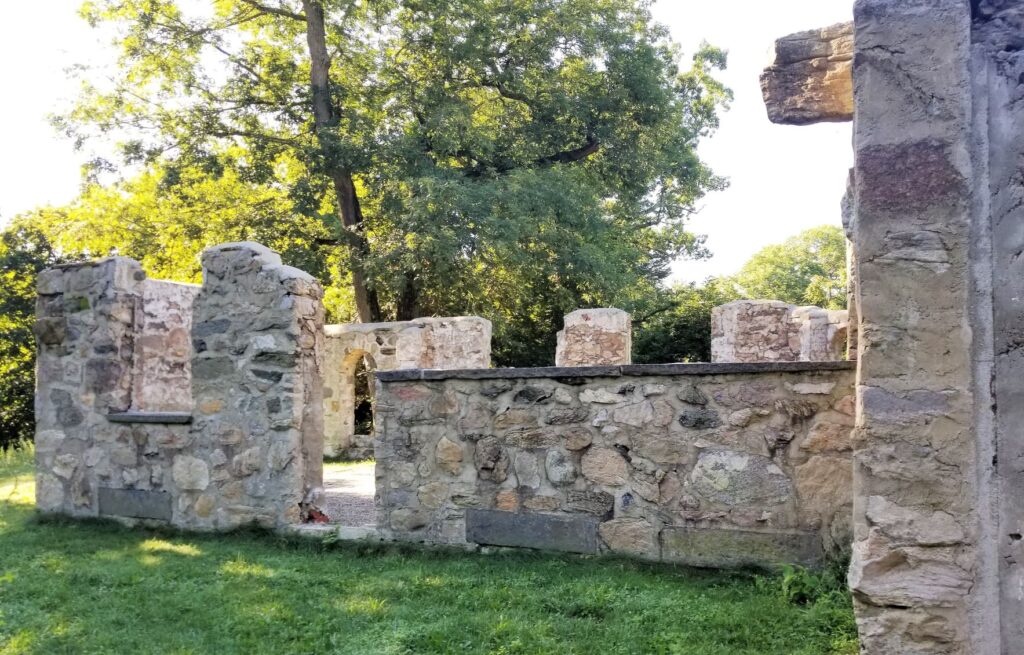 The virtual traveler may be all the rage, but for those of us working at our computers during the coronavirus, more time in front of a screen seems like the opposite of a getaway. So on a recent walk not five miles from my home in Greenwich, Connecticut, I was delighted to find the ruins of a mansion hidden deep in the woods off the trail of a city park.

I’m a sucker for the large historical artifact, which I wrote about in this article for The New York Times. I’ve written about my visits to historic sites in Iceland, England, Germany, Turkey and Syria. But to have one biking distance from my house was a delight. So surprised was I to see the remains of this home and learn of its history, I returned home feeling very much like I’d had a travel adventure.

Wyndygoul Mansion, (Gaelic for windy glen) is more site than home, only a few stone walls remain. It was built in 1900 by Ernest Thompson Seton, a Canadian expat who bought several parcels of land to create a 146-acre estate, according to an article by James O’Day in the journal of the American Society of Landscape Architects. 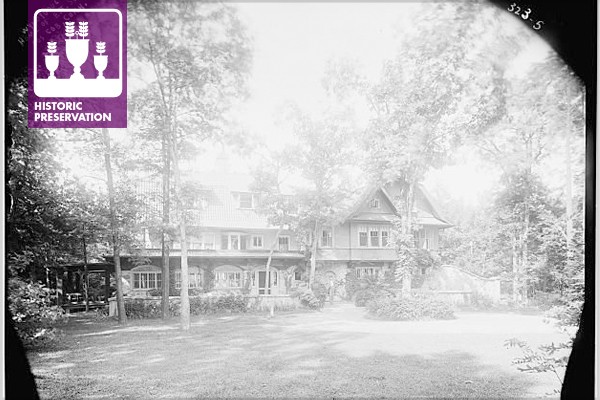 Seton’s contribution to history was the creation of Seton Woodcraft Indians, a boys organization to encourage interest in nature that became the Boy Scouts. His wife, Grace Gallatin Seton was a suffragette who put her philosophy into action by creating Girl Pioneers, which became Camp Fire Girls. Their daughter, Anya Seton grew up to be a writer of historical fiction She wrote a dozen books several of which were made into Hollywood movies.

Making and recording history were activities that lingered in the house even after Seton sold the home to Maurice Wertheim in 1913.  Wertheim was banker, chess enthusiast and a zionist. He was president of the American Jewish Committee in 1942, as the war raged in Europe. 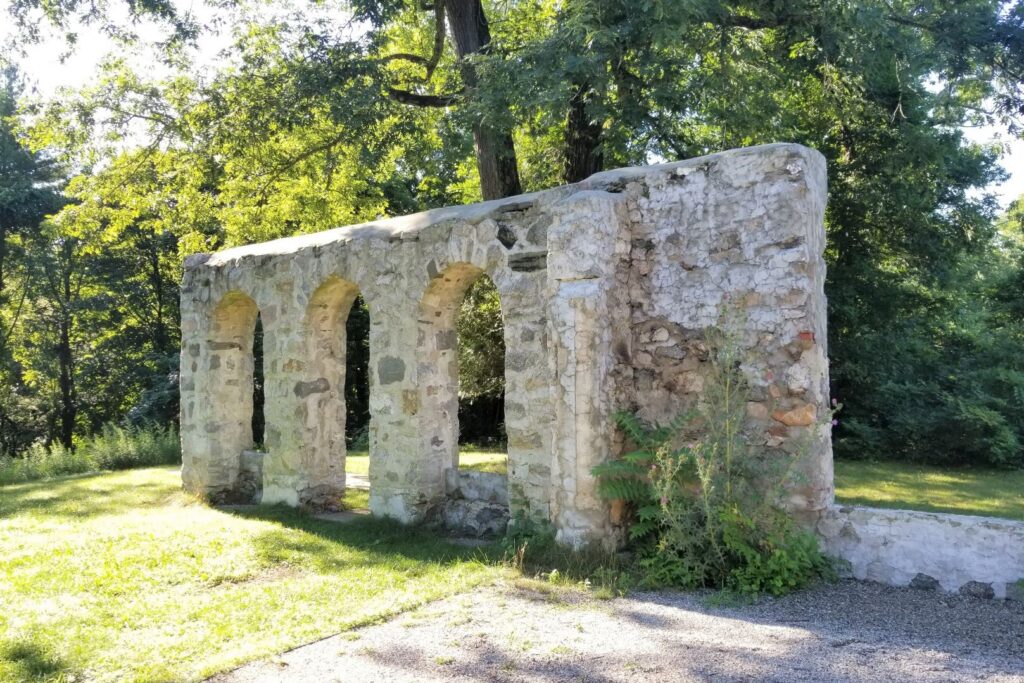 It was at Wyndygoul that he met with various Jewish leaders including David Ben Gurion to formulate a proposal for the unrestricted emigration of Jews to Palestine including allowing for an autonomous Jewish commonwealth. The plan was extremely controversial and was met with resistance at the time. Weirtheim stepped down from the AJC. But Wyndygoul continued to inspire its residents to explore the world outside of Greenwich and to put pen to paper.

The Wertheims had two daughters, the historian Barbara Tuchman and peace activist Josephine Pomerance. It was from this setting, or more accurately a barn converted to studio that Tuchman wrote her Pulitzer Prize-winning book, The Guns of August.

Her sister, meanwhile was a consultant to the United States Arms Control and Disarmament Agency until her death in 1980. The New York Times obituary included an earlier interview in which Pomerance said she was inspired to involve herself in the disarmament campaign following nuclear attack drills in the fifties that terrified her three children.

“I thought it was alright if a mother had to get up nights with measles or chickenpox, but having to comfort her children because of fear of a nuclear bombing was a little too much,” she said. “It was time a mother did something.” 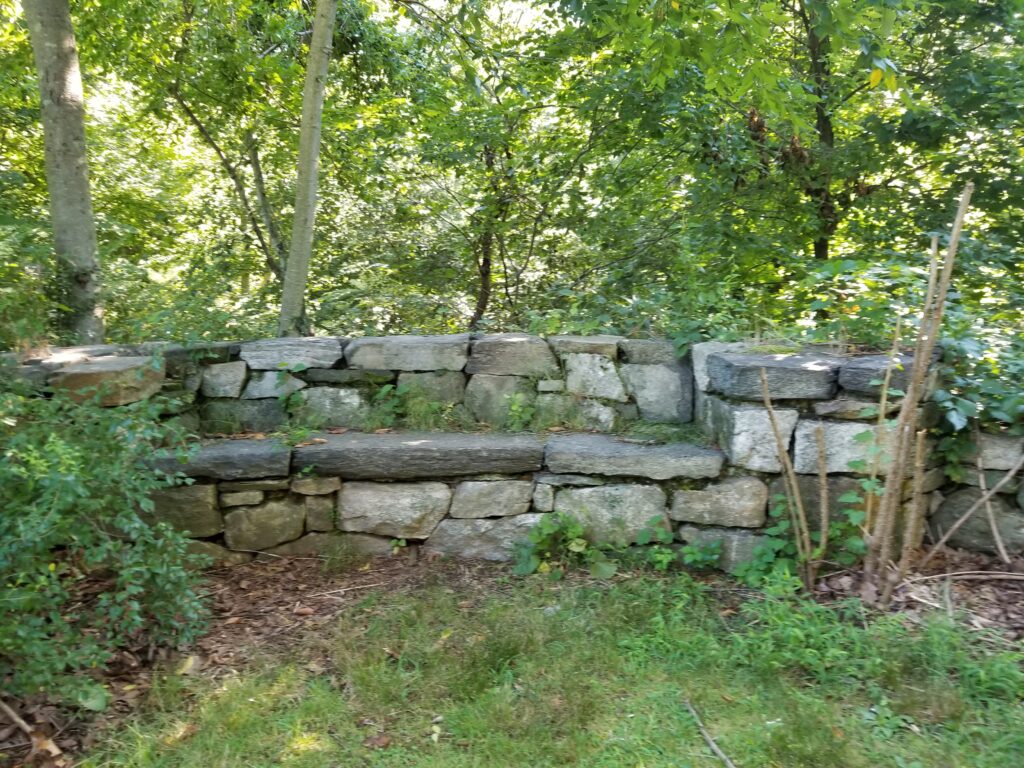 When I first came across the wide clearing where Wyndygoul once stood, and sat on the cool stone bench looking over the hills of the Pineum, when I took tentative steps across a rickety walk to a garden patio overgrown with weeds, the former estate seemed expansive. Too big in fact for just two households to have called home.

Having spent time learning more about the impact that house and those occupants have had on the world, I have a different opinion. Those families never confined themselves to the bucolic Wyndygoul because from there their ideas took flight.

The final contribution, of course, is the opening of all this land to the public.

The Pineum and the adjacent Pomerance Park are lush with fragrant greens and crisscrossed with trails. The canopy ricochets the sound of birds down to the ears of those walking below, especially the extremely vocal wood thrush whose call sounds like bells.

It was in search of that wood thrush that I ventured off the trail, climbing a hill beyond an inexplicable elevated walkway and discovered Wyndygoul and all its history. At a time when getting out of the house seems more precious than ever, something that allows the mind to wander into the larger world is to be treasured.

I bet there are undiscovered treats where you live, too. Now is the perfect time to find them. 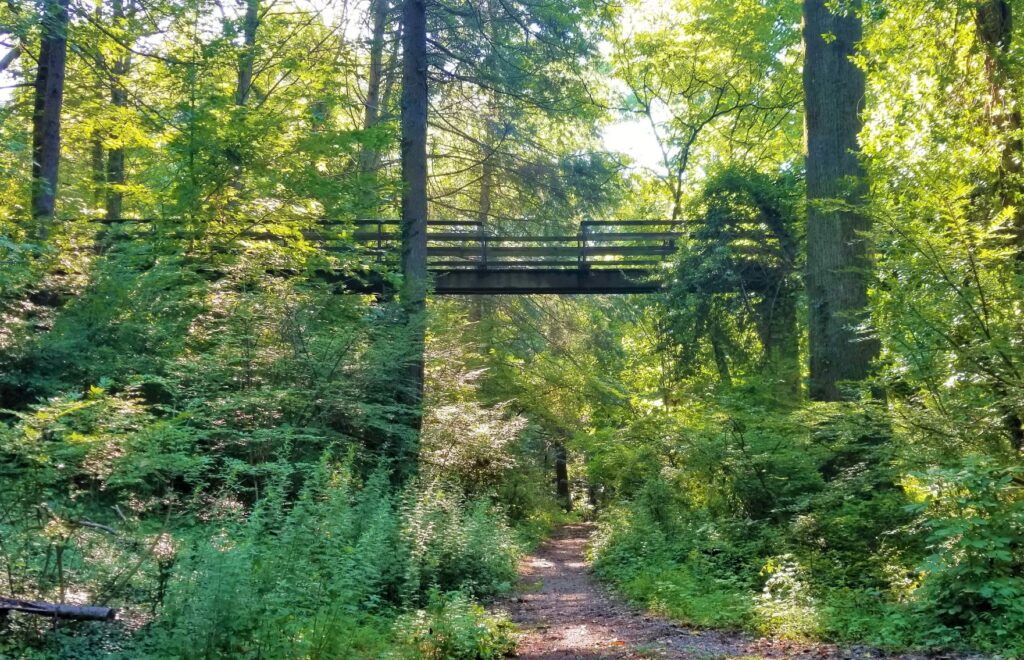 One response to “Finding Travel Treats Close to Home”