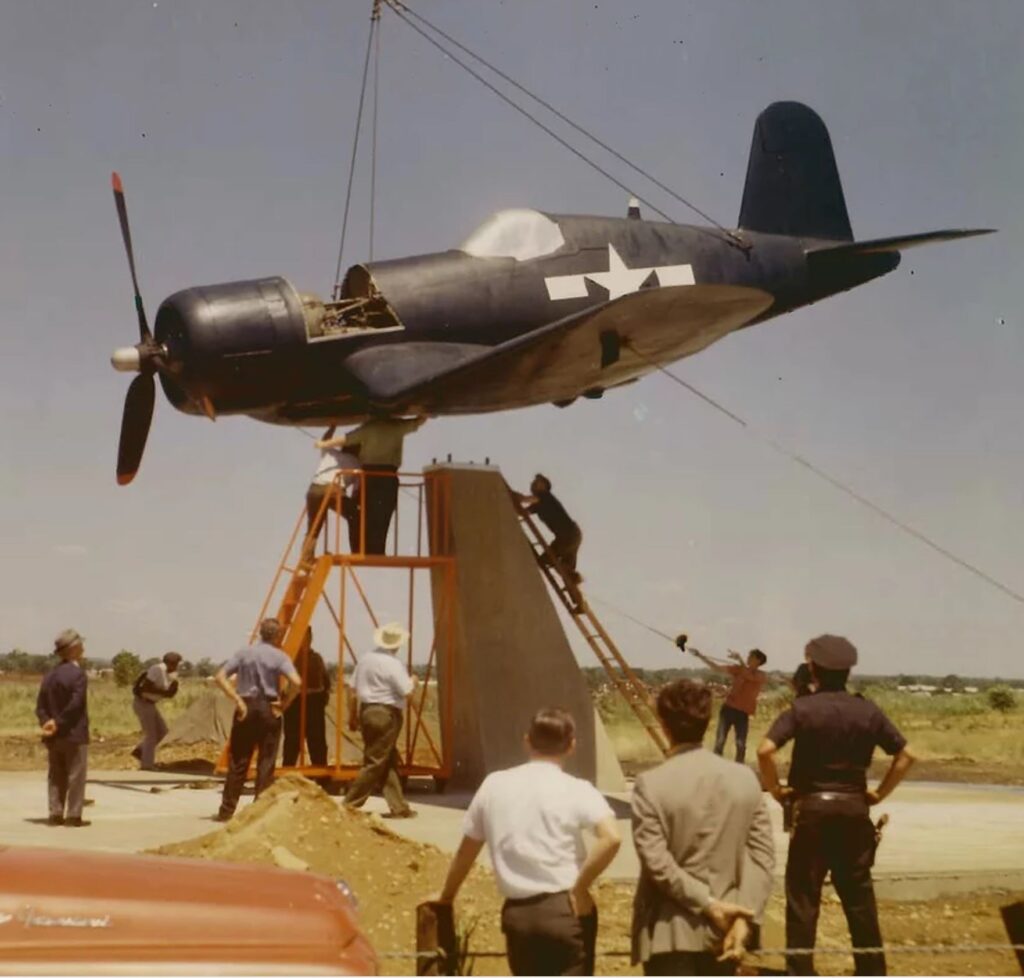 Among the events scheduled to commemorate the 80th anniversary of the Japanese attack on Pearl Harbor on December 7th, is a gathering this weekend at the Connecticut Air & Space Center. A World War 2-era warbird, a recently renovated Chance Vought Corsair, dominates the main room, on the property of the historic 1929 hangar of Curtis Wright Flying Services.

The Corsair was a carrier-based fighter plane, the fastest Navy plane at the time with a range of 11-hundred miles. FG-1D with the number 92460, is an artifact and a symbol of the museum’s particular focus; Connecticut’s contribution to aviation history. Over the past century, the state’s companies and citizens have played a significant role in military, commercial, civil and special-purpose aviation. 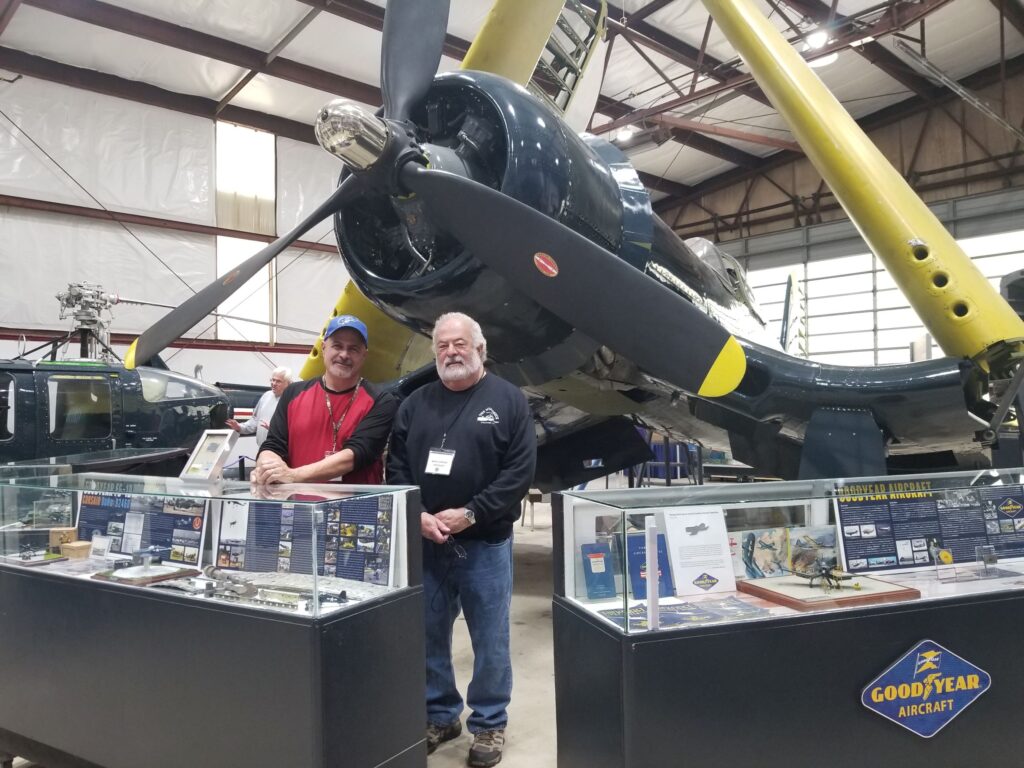 Corsairs were built by the thousands at a factory in coastal Stratford, within walking distance of the buildings that now house the museum. The plane’s component parts were also produced by manufacturers in the state. Hamilton Standard made the propellers and Pratt & Whitney the engines.

FG-1D number 92460 was actually built by Goodyear Aircraft Company in Ohio, under license from Chance Vought. It spent its flying life shuttling from military base to military base, first in the United States, then in El Salvador where it was used in the late sixties by that country’s military.

On its return to America at the end of the decade, the Corsair FG-1D was hoisted atop a concrete pedestal at Sikorsky Memorial Airport where for forty years it was a source of pride for residents of the Nutmeg State. Harsh winters, sunny summers and proximity to the ocean took a toll on the airplane. Between 2007 and 2013, volunteers with the Air & Space Center restored the airplane to become the centerpiece of the museum. 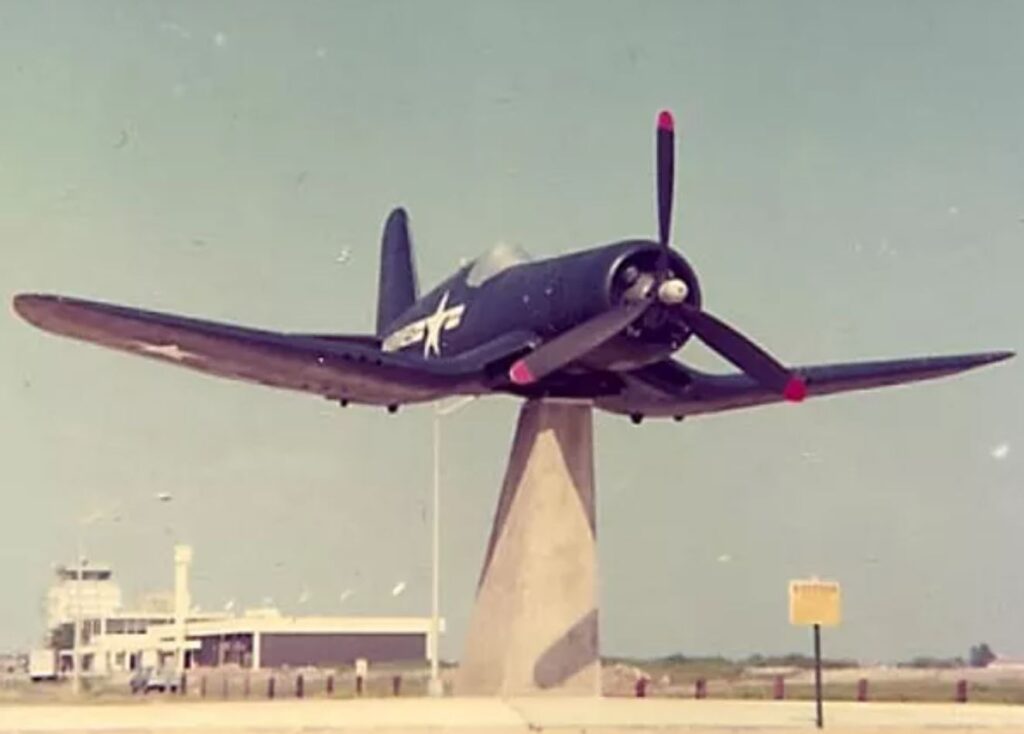 Despite its central position though, Connecticut’s aviation history goes back much farther back than World War 2.

One corner of the Air and Space Center is reserved for the accomplishment of Connecticut’s Gustave Whitehead, a German-born aviation pioneer whose twin-engine monoplane powered by steam and acetylene engines reportedly flew for the first time in 1901, two years before the Wright Brothers.

“He was an eccentric genius,” said Len Roberto, a member of the center’s board of directors. That his work was not widely applauded then or well known now is attributed to Whitehead’s unusual personality, Roberto said. “He didn’t care about recognition, he didn’t care about going down in history.”

Visitors can examine for themselves the evidence supporting Whitehead’s claim to have been the first in powered flight. And soon, a replica of the aircraft will be added to the exhibit.

Where Whitehead lived in relative obscurity, another Connecticut aviation pioneer is famous for his many contributions. Igor Sikorsky made his mark in three different areas of aviation, two of them while working in America. He arrived in the country from Russia in 1919, five years after creating the world’s first multi-engine airplane there. His next success was building the Sikorsky flying boat. In the photo below from the Sikorsky Archives, Sikorsky is photographed with Charles Lindbergh on an S40, first produced in 1931 and at the time the world’s largest airliner. 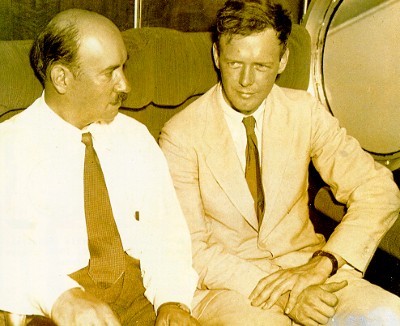 Sikorsky’s later iteration, the S-42 started service for Pan American World Airways in the late thirties, crossing the North Atlantic and initiating service across the Pacific.  It is the predecessor to today’s transoceanic airliners. Capt. Robert Evans, about whom I have written before, was one of a number of Pan Am pilots whose careers took flight on the Sikorsky 42 and kept soaring until they were flying left seat on the Boeing 747.

But even Sikorsky’s role as the grandfather of long-haul comercial flight wasn’t enough for him. In the 1940s he began his third era developing helicopters in many sizes and for many purposes.  Several of them are on display at the Air & Space Center though my award for the most audacious goes to the S-60 Sky Crane. Imagine a giant grasshopper capable of lifting 11-thousand pounds, (heavier than my campervan!) with a capacious cockpit and convertible seat that allows the pilot to pivot from flying the aircraft to controlling the crane. Yup, you read that right. 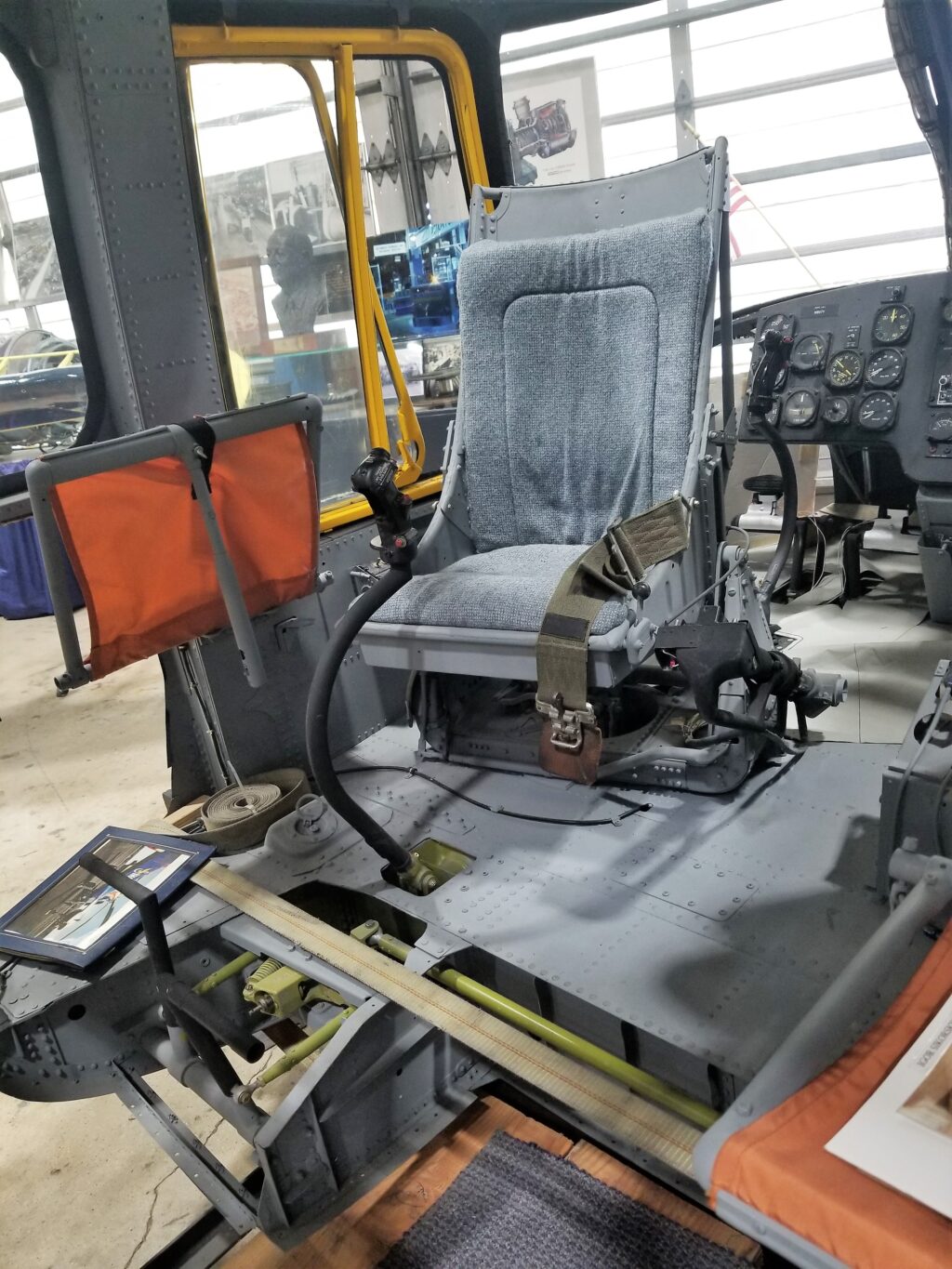 “The Sky Crane S60 evolved into one that is still used today,” Roberto said, explaining that the S-64 Aircrane by Erickson Inc. is often used in firefighting operations or for industrial applications.

Enterprise isn’t confined to the enormous. The BD5 Micro takes up very little floor space since being donated to the museum by the widow of Reinhard May, an aviation enthusiast who owned built and flew the tiny kit plane from the airport near the museum.

The sixties-era pusher still looks modern but is probably more appropriately listed in the category of airplanes that literally fly but figuratively, not so much. That said, it’s adorable.

Having visited dozens of air museums around the world, the ones I like best are those that don’t ignore the people who designed, built, operated and supported the machines on display. I have a particular affection for the Connecticut Rosie the Riveters cases at the Air & Space Center. One of those ladies is my mother-in-law, Marietta Schembari. I’m proud of her and the work she did welding ductwork on Corsairs while she was still a teenager. 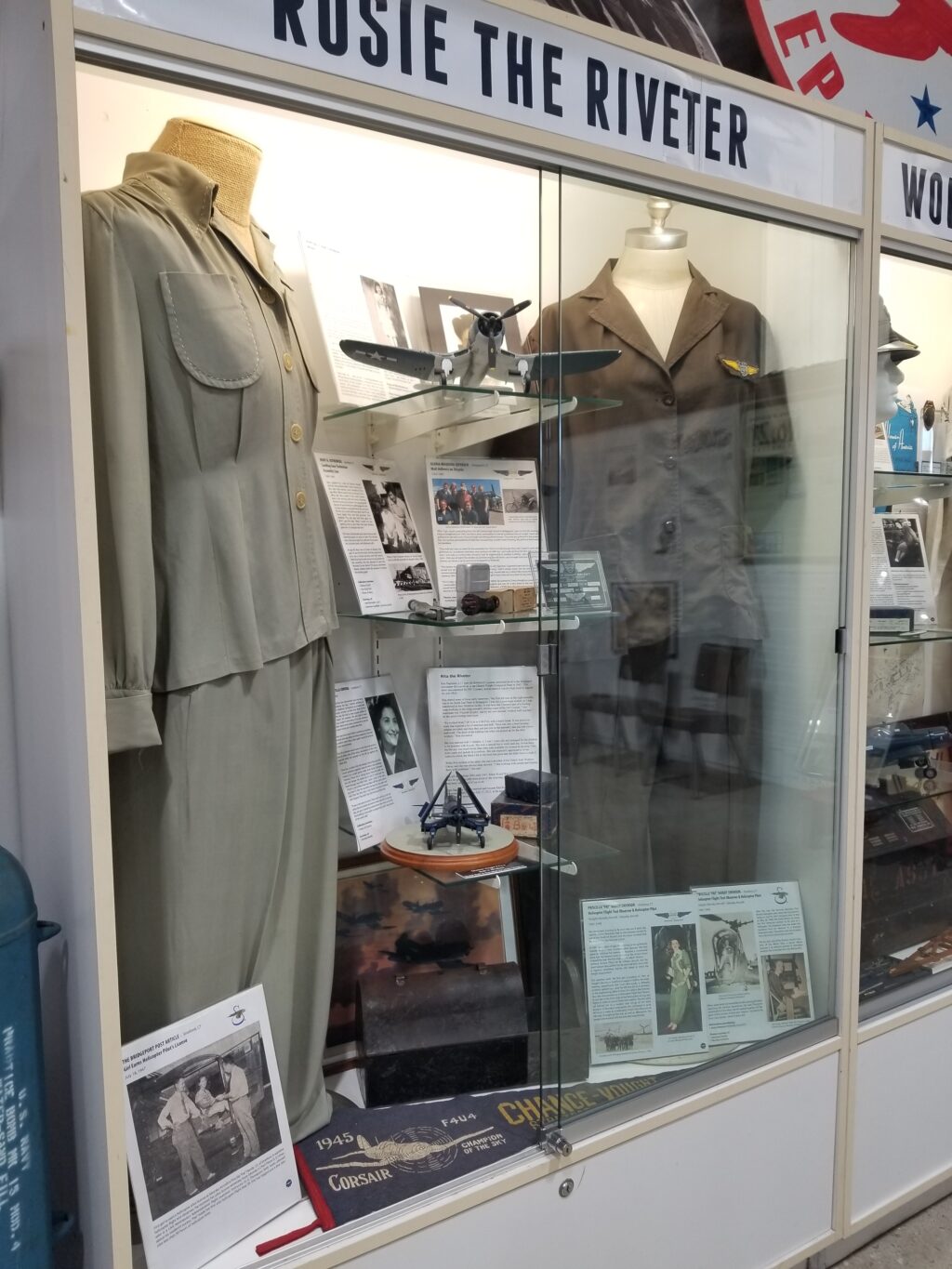 But from a 10-thousand foot perspective, I’m proud of the millions of women who, like her, answered the call of a nation in need. Their uniforms, wrenches, toolboxes and lunchboxes show museum-goers the ordinary trappings of extraordinary women. The awarding of the Congressional Medal of Honor in 2000 to all Rosies collectively, goes a long way to finally recognizing and thanking them for their service. 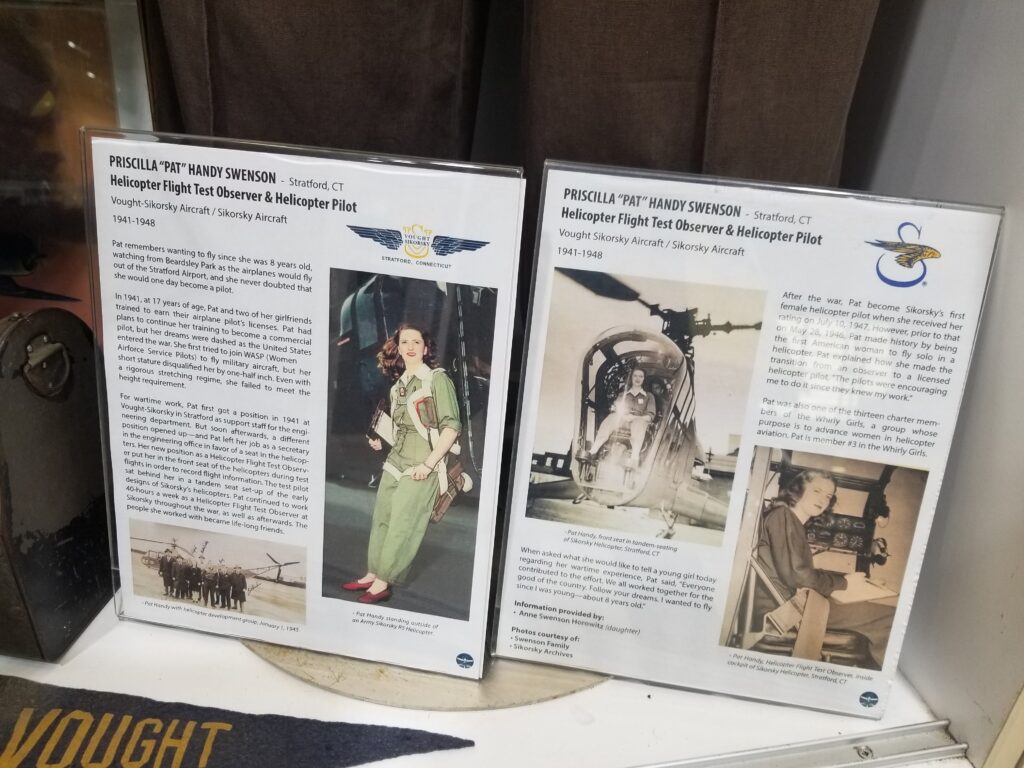 So if time and geography allow, pay a visit to the Connecticut Air & Space Center on December 11 to learn more about the fruits of imagination and grit and the people who harvested them.

Can’t get to the Nutmeg state by Saturday? View historic footage here.